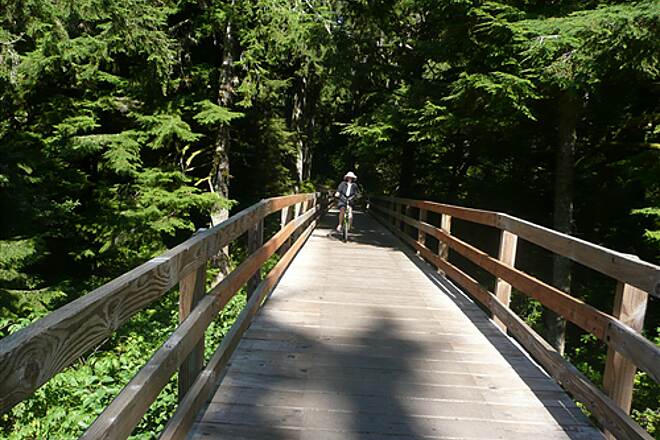 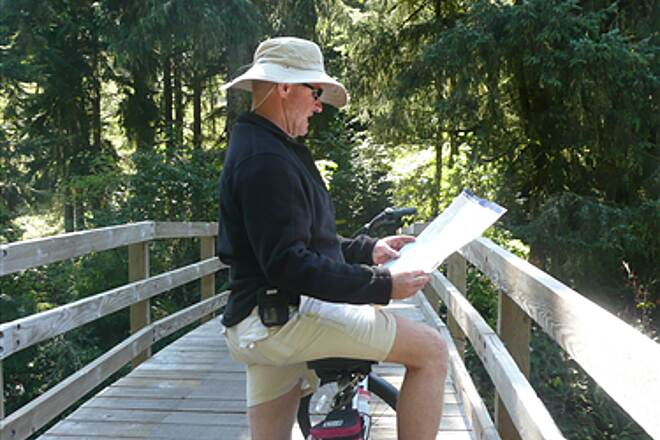 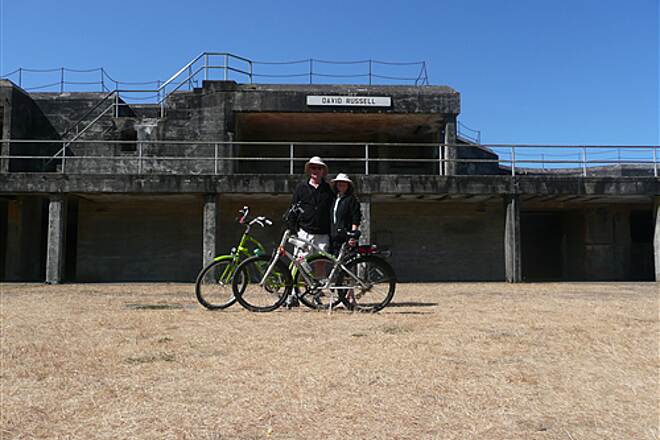 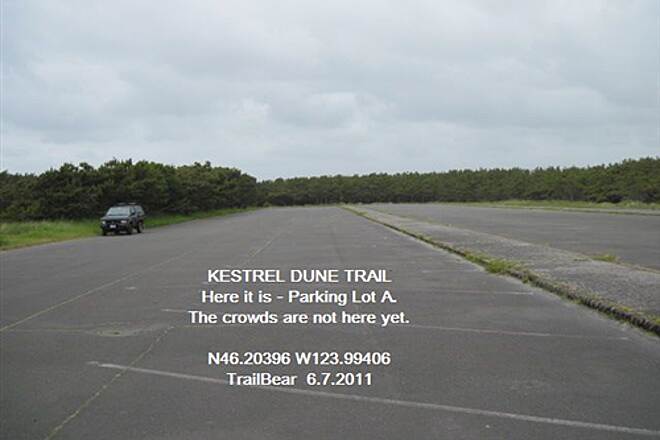 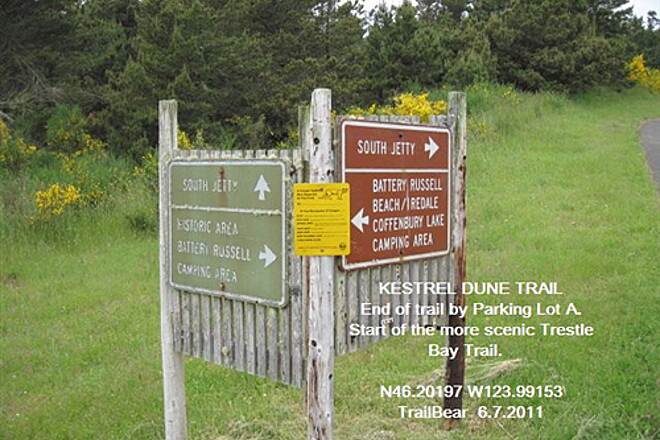 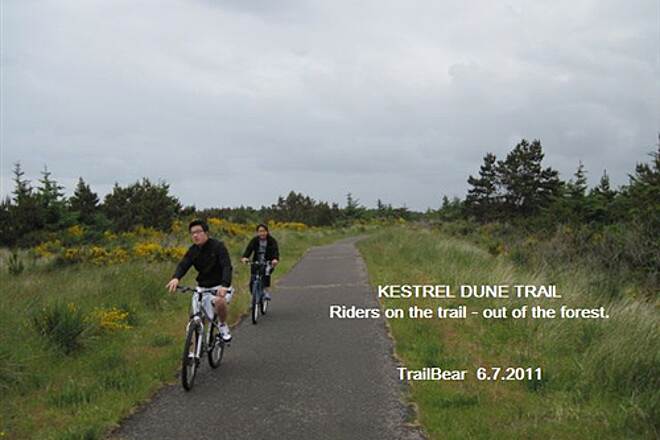 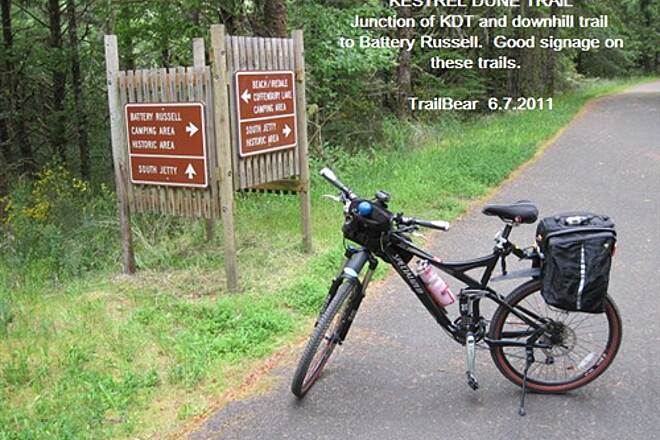 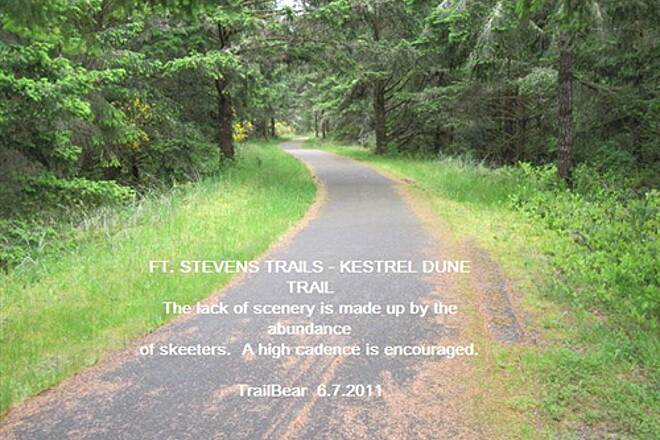 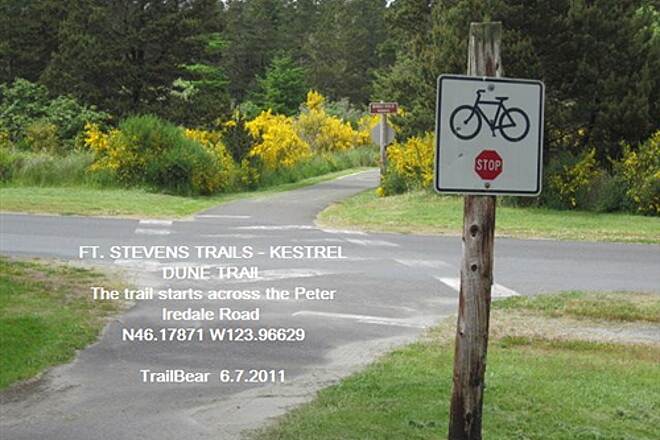 View Trail Map Send to App
The Kestrel Dune Trail is one of several multi-use pathways in the park that houses historic Fort Stevens, built at the mouth of the Columbia River near the end of the Civil War. The trail begins on Peter Iredale Road, named for the 1906 shipwreck that is still visible on the beach. From there, the path leads north through spruce and hemlock forests, paralleling the ocean only about 200 yards away. After nearly 2 miles, the trail ends between Jetty Road and Parking Lot A at the base of a large sandy plain called the Clatsop Spit. From here, you can continue your journey east on the Trestle Bay Trail, which leads into swampland and another trail junction.

This trail is what I call a recreational cross training experience. Your ride is punctuated by walking (on sand), climbing ancient ruins (well not ancient, but cool none the less), and playing on the beach. We were there September 1st and the weather was gorgeous. We camped overnight and the campground was terrific. The next morning, we parked at the main fort which has an outstanding little museum and a walking tour of the main fortifications. Stunning views of the mouth of the Columbia River can be had here, especially from the fire control towers. Near the other end of the trail is a second fortification, which I found to be eerily attractive, especially with the architects use of arches. We never reached the ship wreck site; we ran out of time exploring (4 hours at least) but we definitely plan on going back.

TRAILBEAR AND THE SKEETERS – The Kestrel Dune Trail

Was Ft. Stevens the model for Camp Swampy in the Beetle Bailey cartoon strip? TrailBear thinks so. If you like swamps, this park has them in abundance.

It also has a lot of good things going on. What is not to like: Miles of beach, a wreck, nine miles of bike trails, a good campground and a great historic area worth a half day of touring. Be advised that it also features the Camp Swampy Skeeters. Deep Woods Off and fast pedaling seem to work. TrailBear, being slow and OFF-less, was a very popular menu item.

Over yonder is The Graveyard of the Pacific. This is not Chamber of Commerce hype. You can ride out to the Clatsop Sands which form one arm of the mouth of the river. There are over 2,000 wrecks off the mouth of the Columbia River. It is a lethal place. Try closing the coast, your position uncertain, feeling for the mouth of the river in thick weather, to hear the lookout shout, “Breakers ahead!”

Then there are forts. Ft. Stevens was one of the forts built to control the mouth of the Columbia. Across the river are Ft. Canby and Columbia. Stevens was the primary fort in the system. It has hidden batteries, gun mounts, magazines, director towers, sea mines and other fun things. What a great place for boys of all ages to explore.

You could stage out of Parking Lot A at the upper end of the trail, but who would want to? Devoid of charm? Yes!

As the trail starts 0.2 miles from the beach on the Peter Iredale Rd., you can stage out of Coffenbury Lake to the east (lots of parking, a lake, restrooms, water, picnic area, etc. and ride the Sunset Trail west to the junction with the Kestrel Dune Trail. Or you can ride out to the beach and start from there. There is a spur road to the left at the beach which leads to an upper parking lot with restrooms. Start from here, if desired.

But first, a few pix of the Peter Iredale, which came ashore on the Clatsop Sands in 1906. There is just a fragment left, so better hurry. When TrailBear was a cub, there was a lot more of the Iredale to see. When it goes the Chamber of Commerce will have to commission a wreck replica. With modern navigation systems, they are not piling up on the Clatsop Sands like they used to.


BEHIND THE DUNES – THE KESTREL DUNE TRAIL

The trail runs straight up the Kestrel Dune, out of sight of the sea. There is not much to see. If you were expecting magnificent views of the Pacific, you have the wrong trail. A beach walk would serve.

What do you see? Low coniferous forest, then some open patches, then the trail end a bit shy of Parking Lot A. The main use of the trail is to get you to more interesting parts of Ft. Stevens.

Such as – the junction of the Battery Russel Trail. This goes downhill into the battery.

Such as – the start of the Trestle Bay Trail. This leads through the swamps (got your OFF?), but scenic swamps. It ends in the Historic Area, so give it a go.

Want to explore the Clatsop Spit? Get onto the Jetty Road and ride it to the end. You will find a large observation tour with views up and down coast and across the mouth of the river.

Notice the jetty. It has a rail road built on it. That was how they built it. The tracks came across Trestle Bay on a … trestle. Trains loaded with rocks ran out across the spit and ended where ever the head of the jetty was on that day. Dump rocks and go back for more. Have fun on the Ft. Stevens trails. Lots to see and do. In August there is a trike rally at the park. As TrailBear is riding an HPV Scorpion FS trike now days (pure comfort and lot of bling), he will be doing shameless trike plugs.

Trying to stay ahead of the Camp Swampy Skeeter Swarm.