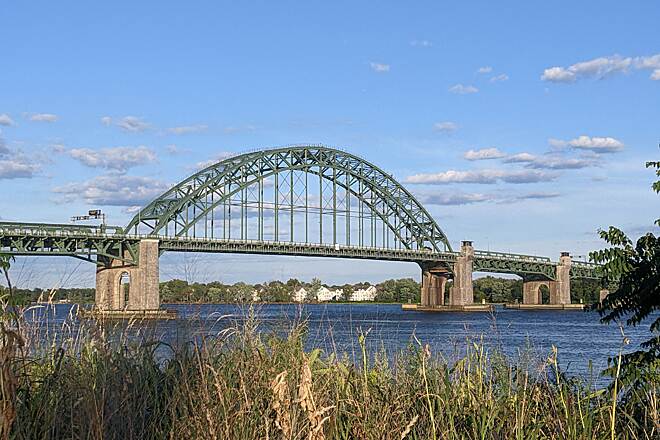 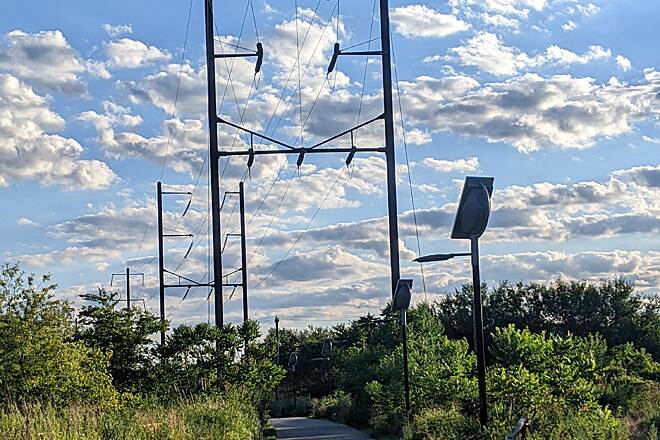 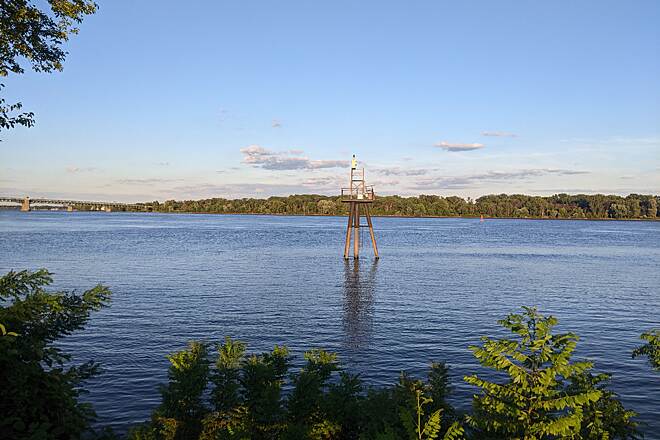 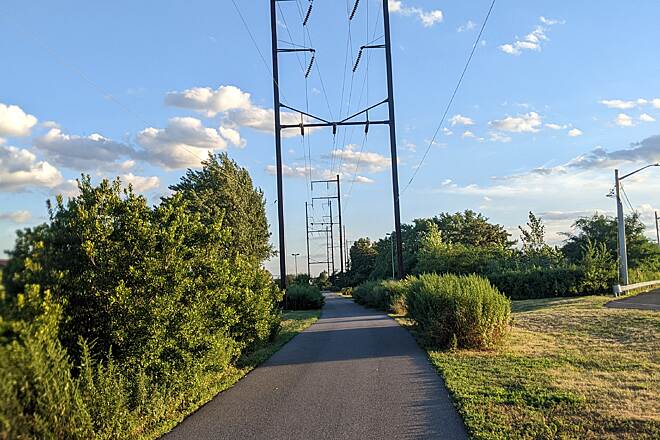 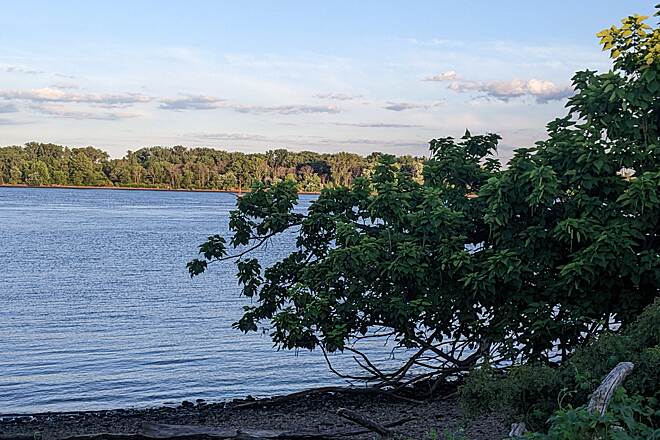 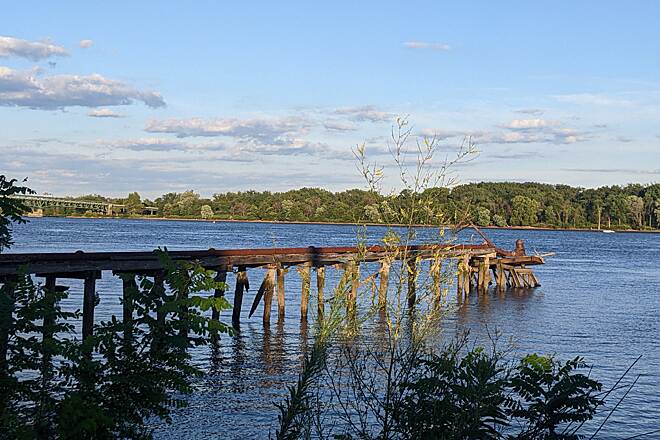 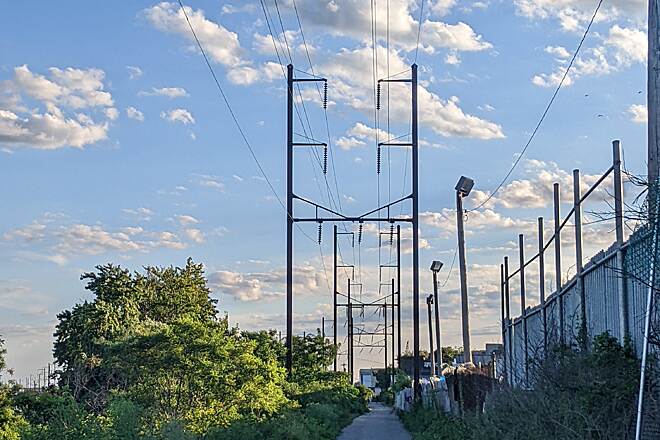 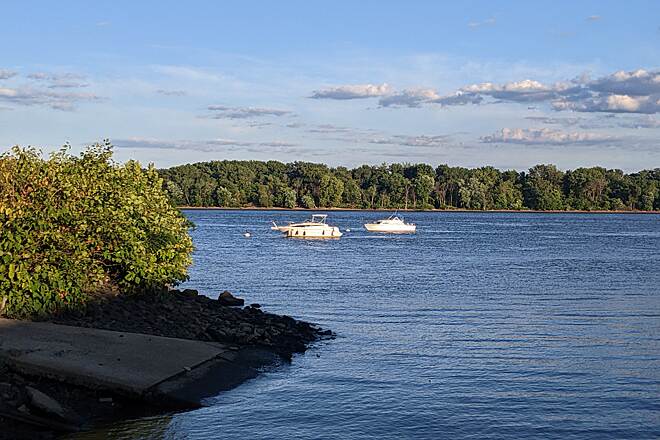 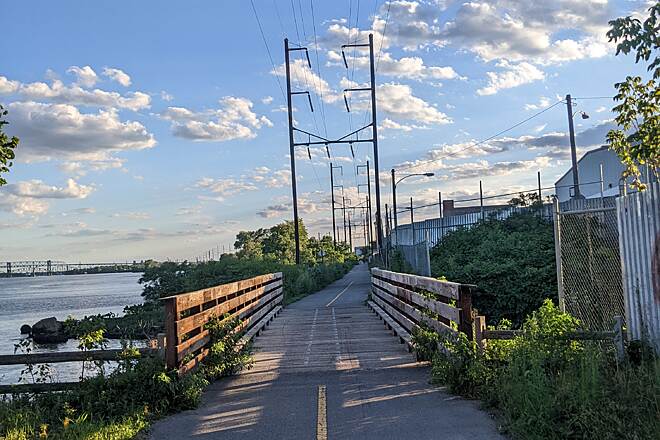 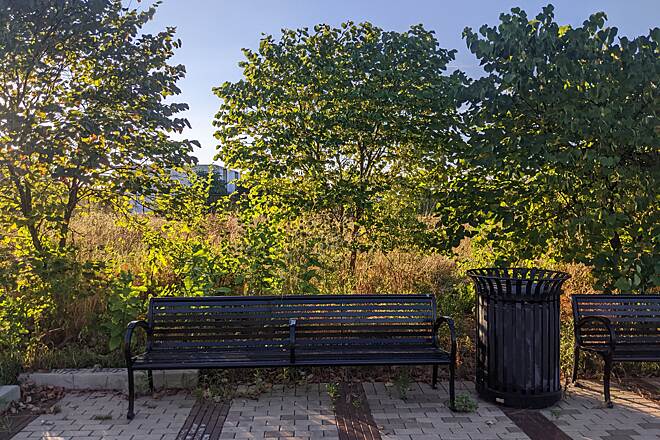 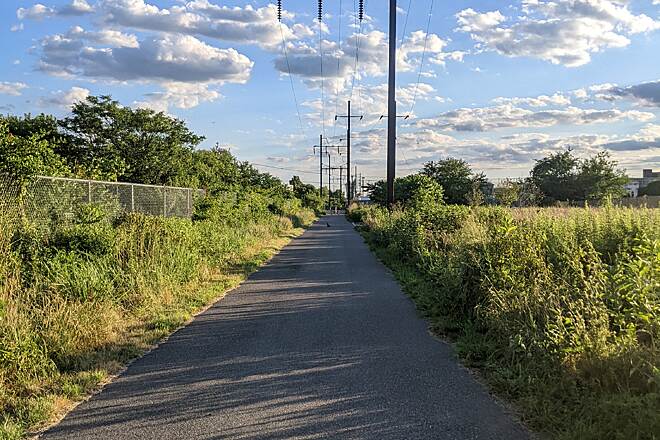 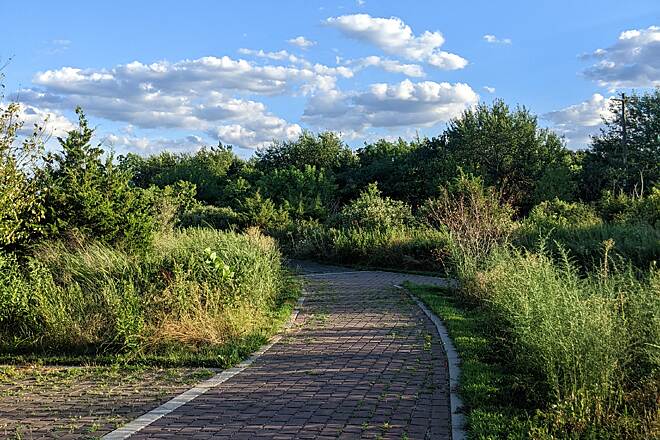 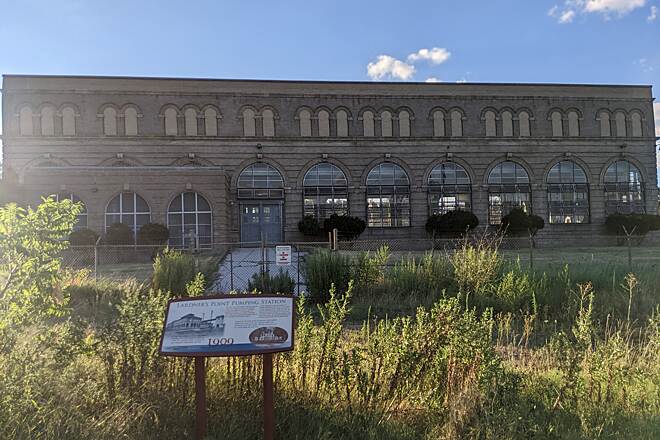 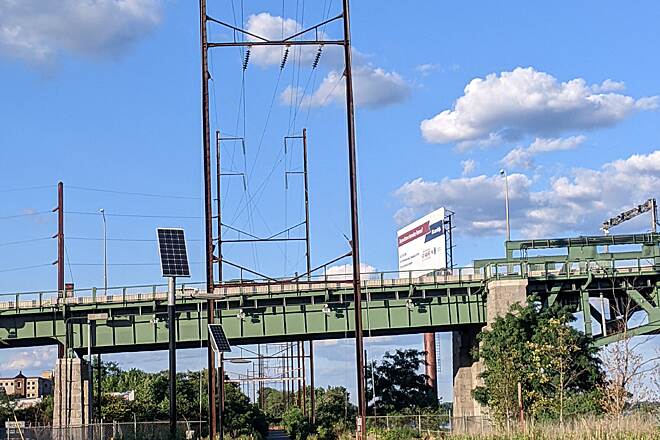 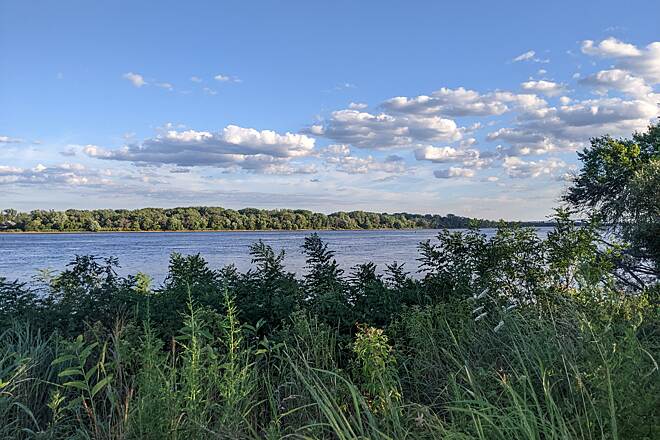 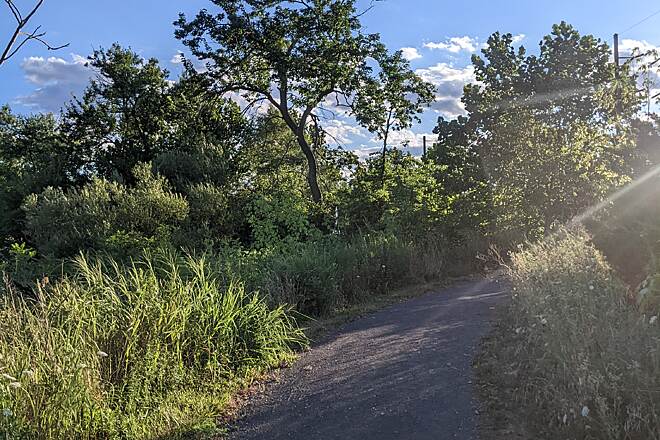 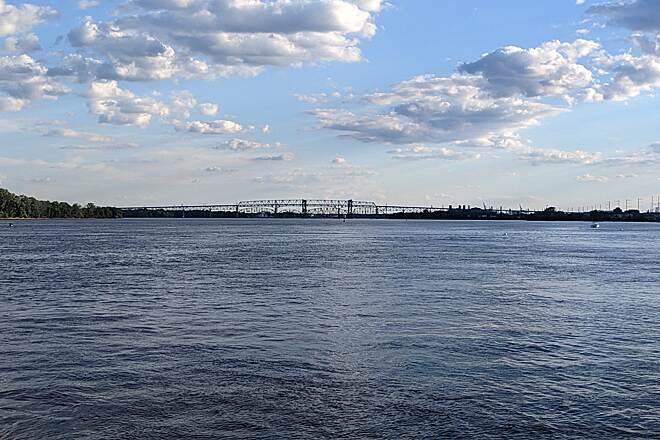 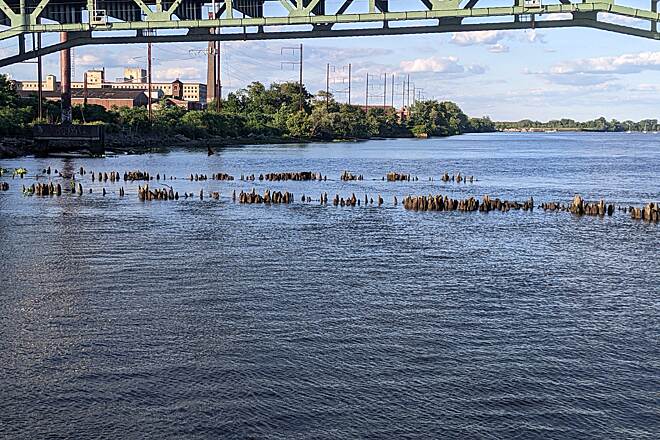 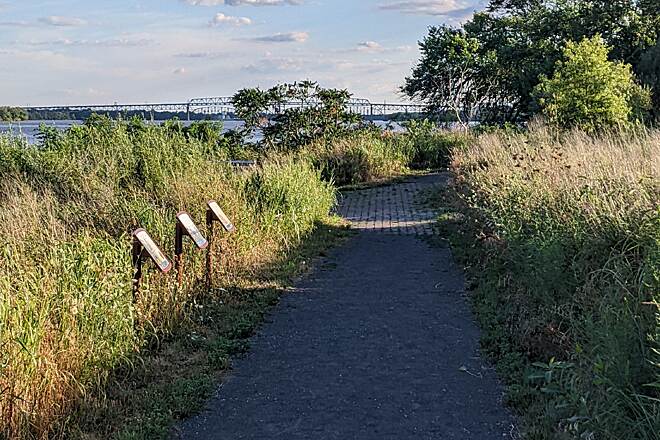 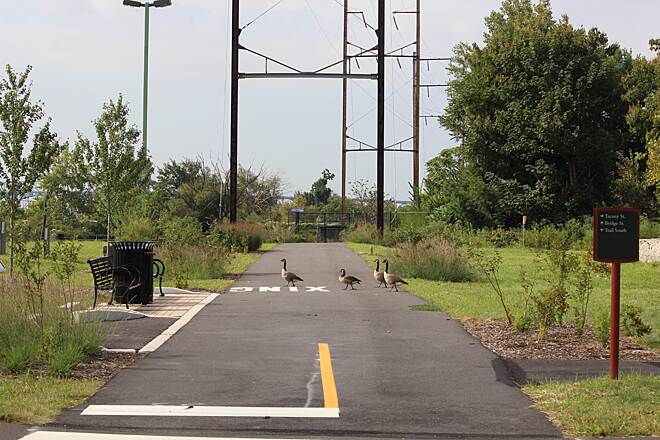 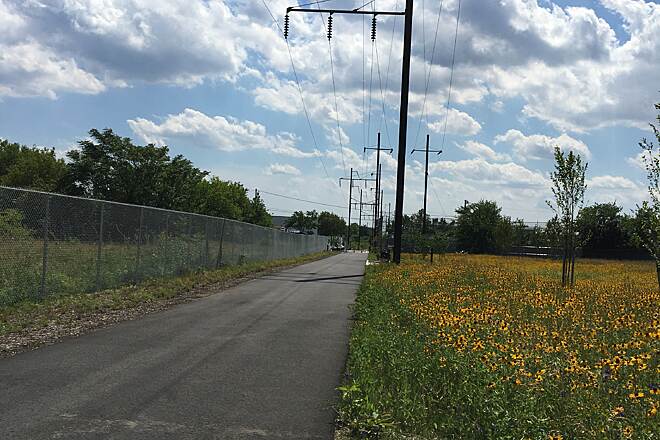 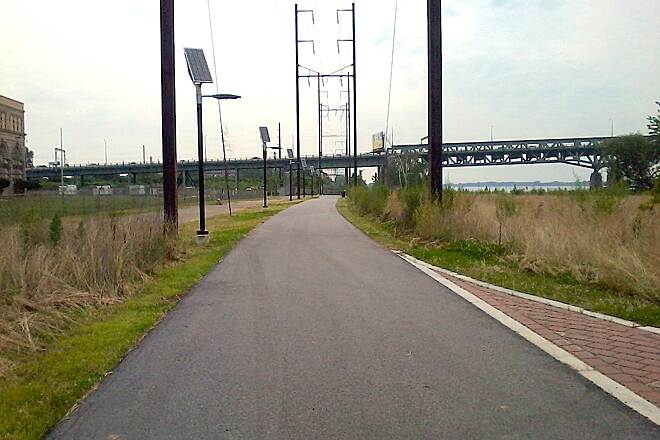 The K&T Trail, also known as the Kensington & Tacony Trail for the former railroad line on which is runs, spans a mile along the Delaware River in Philadelphia. Beginning at the Frankford Arsenal Boat Launch and heading northeast to the beautiful Tacony-Palmyra Bridge, the paved pathway offers up-close views of the river and connects the Wissinoming and Tacony neighborhoods.

A highlight of the route is Lardner’s Point Park on the trail's northern end. Situated along the riverfront, the park was once a derelict brownfield and now features meadows, wetlands, a fishing pier, and picnic tables.

No, the K&T Trail is not a loop. The title of my review instead refers to the impact that this mile-long trail, which is built along a segment of the now defunct Kensington & Tacony RR, on a section of the Delaware Riverfront in the NE Philly neighborhoods of Wissinoming and Tacony.
Our story begins in the city's early years in the late 17th century. At this time, the banks of the Delaware River were lined with forests and wetlands teeming with wildlife, where Native Americans and early colonists hunted and fished. As the city grew in the 18th and early 19th centuries, the local gentry were drawn to the area's serenity and beauty, building several estates and vacation homes.
Later in the 19th century, numerous industries began popping up along the river, using it as a power source and as a transit route for materials and goods. Mills and factories, as well as the Frankford Arsenal military depot, replaced the earlier mansions and explosive growth occurred as people, many of them immigrants, arrived seeking employment. It was during this period that the Kensington & Tacony RR, part of a network of rail lines that crisscrossed Philadelphia known as the Connecting Railway, was constructed to serve the riverfront.
The area served as an industrial and shipping hub for most of the 20th century. The Frankford Arsenal closed in 1977 and most other industry left over the next decade, sending the area into decline. The K&T RR was abandoned in the 80's, though its rails remained intact, slowly decaying along with abandoned factories and surrounding brownfields.
The dawn of the 21st century saw the riverfront's fortunes turn around as new recreation facilities, including Lardiner's Point Park and the Frankford Boat Launch, were developed. Old ruins were cleared away, allowing new forests to grow and wetlands to be reestablished. In the late 2010's, the old railroad tracks were finally pulled up and replaced by a ribbon of asphalt multi-use trail connecting the two parks and extending a little ways north, to Magee Ave.
Starting at its northern terminus, the trail directly follows the bank of the river, passing beneath the Tacony-Palmyra Bridge. The northernmost of the five bridges that link the city with NJ, the Tacony-Palmyra Bridge is a graceful, concrete structure that serves as a main traffic artery as well as a walkway for pedestrians and cyclists. Like the K&T Trail, this walkway is also part of The Circuit network and can be reached by following the access road to Lardiner's Point Park north to Milnor Street, then turning right onto the bridge. The park itself includes a small plaza as well as a fishing pier where visitors are treated to spectacular views of the bridge and river. Trail users also have the option of taking a gravel path that winds though young, new forests growing along the river bank before rejoining the main trail in the park's undeveloped, southern end.
From Lardiner's Point, the trail continues south through reclaimed meadows and wetlands, passing the Wissinoming Yacht Club. After crossing a creek, it continues south, threading a line between the river and the remaining abandoned buildings of old mills and the Frankford Arsenal, whose site is currently being redeveloped into an office and light industrial park, before ending at the Frankford Boat Launch. The old RR catenaries, which run high above the trail and are still in use as powerlines, as well as the remains of a few old boat terminals, still serve as testimony to the area's bustling past. Otherwise, the quiet and serenity of the trail demonstrate how this segment of riverfront has come full circle, reverting to its original status as a natural area.
Although the trail has several amenities, including benches in Lardiner's Point Park and the Frankford Boat Launch, restrooms in Lardiner's Point Park, ample parking at both parks and interpretive signage with detailed information on local wildlife as well as historical sites from each of the past eras, there was some litter. The trash was especially bad on the middle section of the trail near Comly Street, keeping me from giving it five stars.
Plans call for the K&T Trail to be extended north to the newly opened Baxter Trail and south to the Port Richmond Trail in the near future. All of these segments of multi-use trail being built along the Delaware River will eventually be joined to form the Delaware River Greenway, which, in addition to comprising part of the Circuit network, will also form part of the East Coast Greenway, a long distance trail that follows the Eastern Seaboard of the US from Maine to Key West, FL.

Cool breeze being next to the river, very few people on the trail, a little short. Hoping the expansions happen eventually.