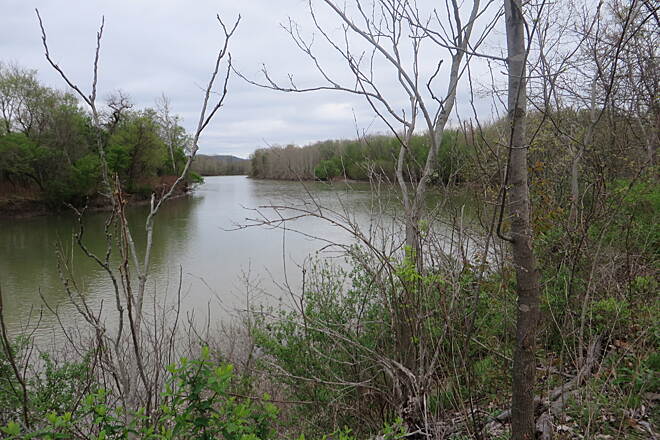 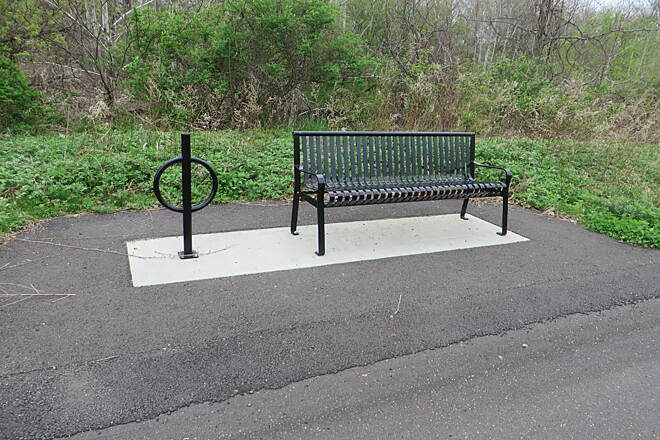 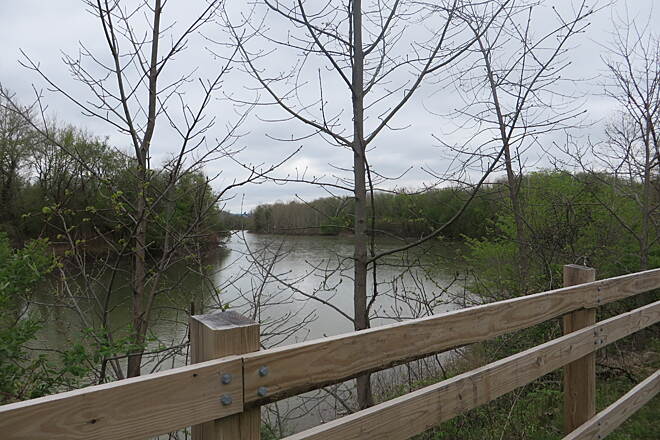 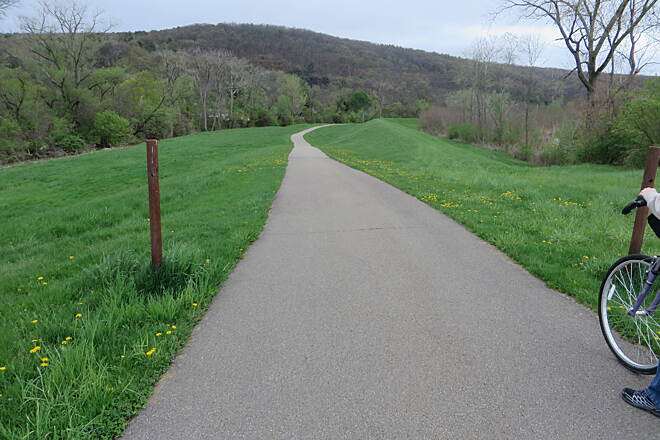 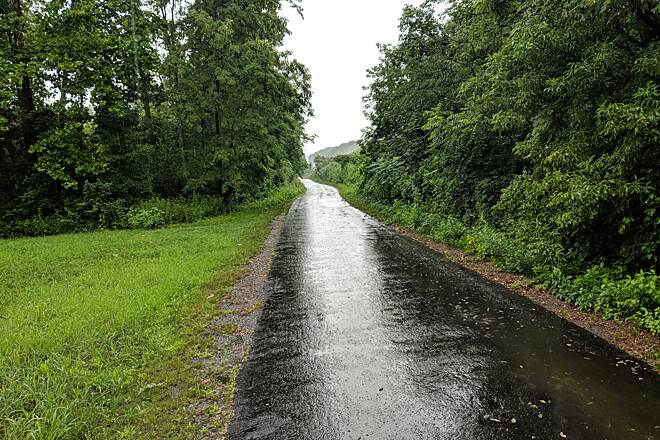 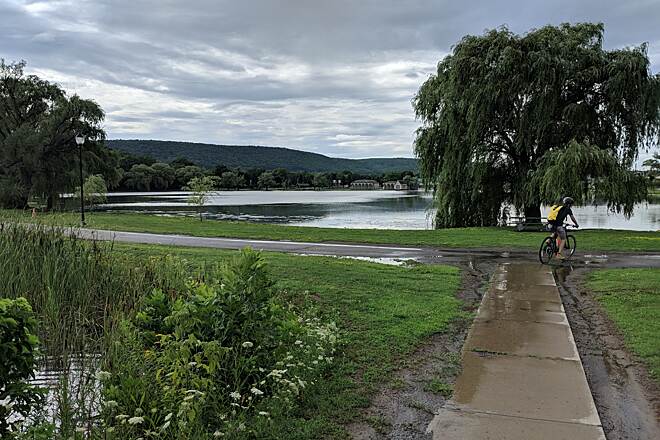 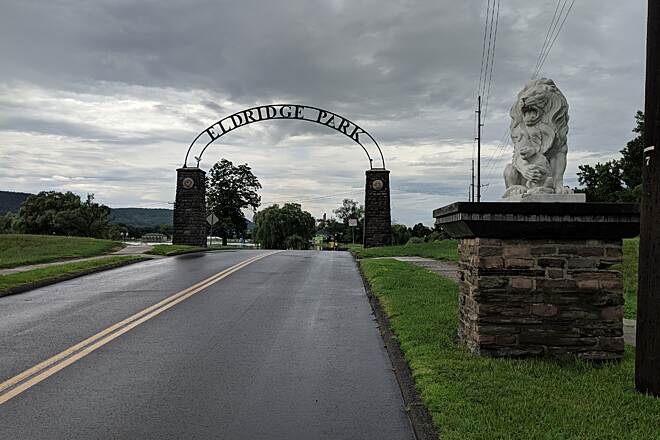 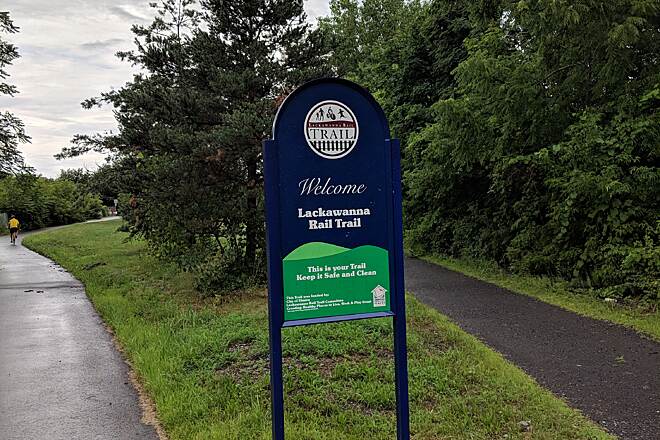 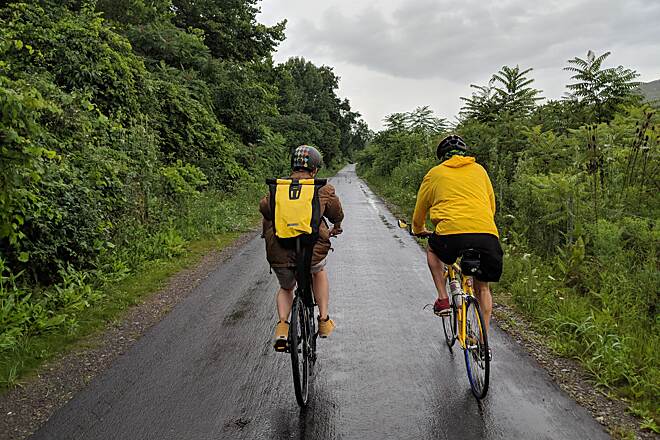 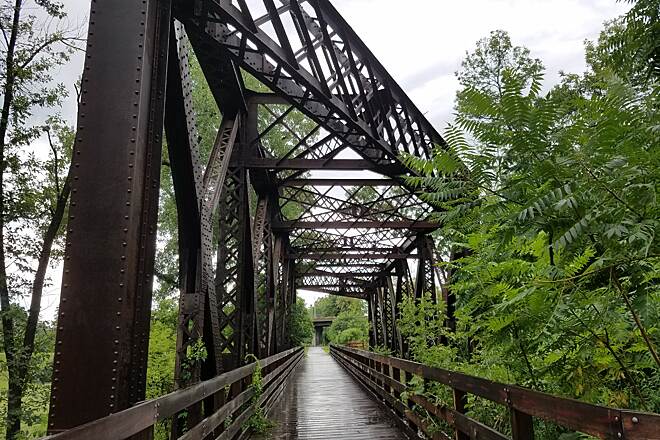 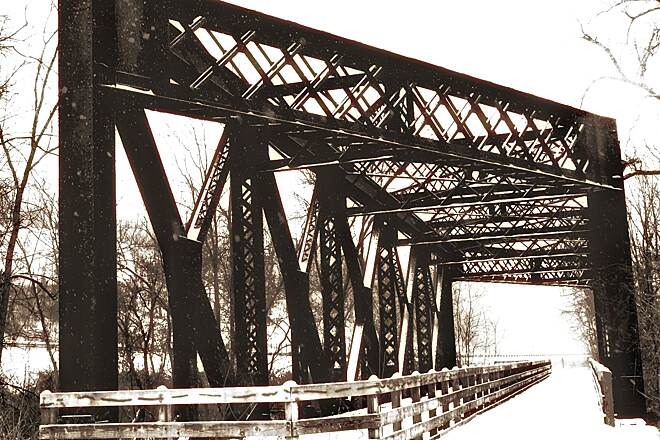 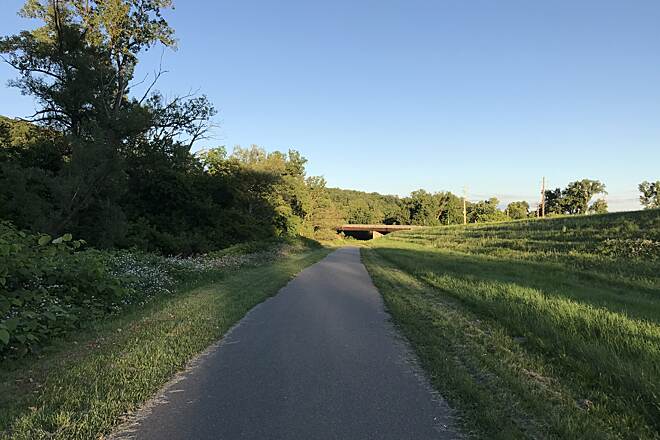 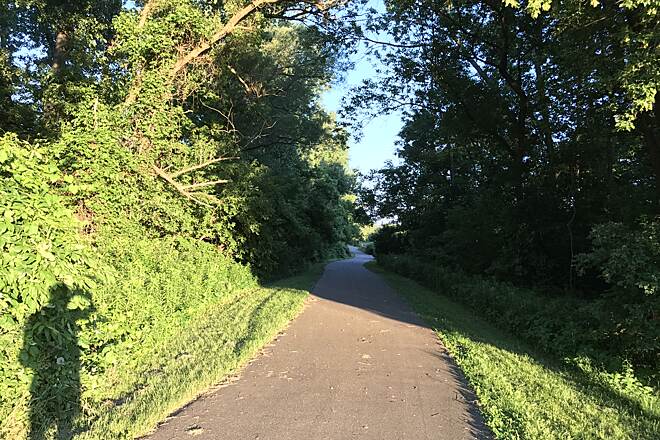 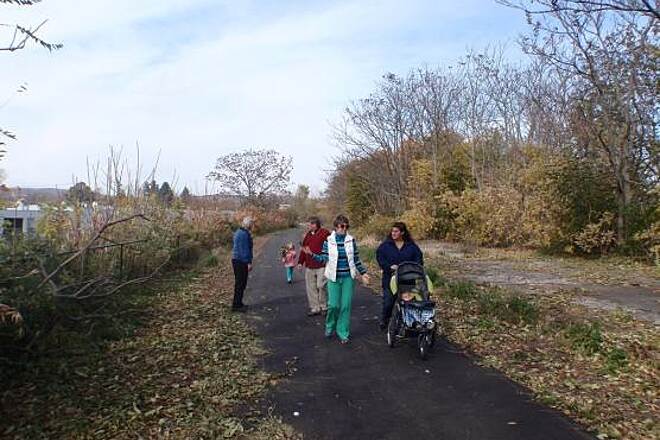 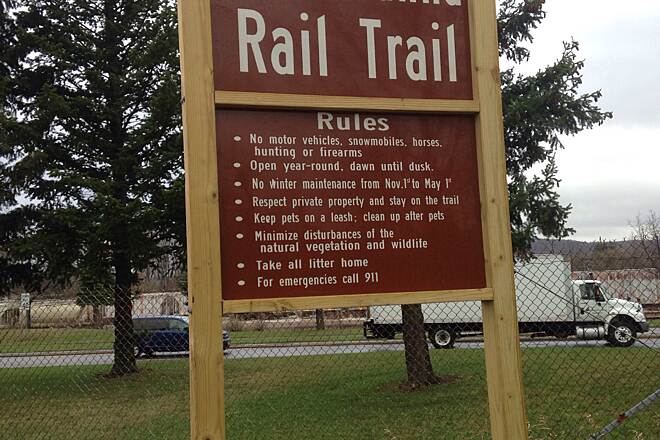 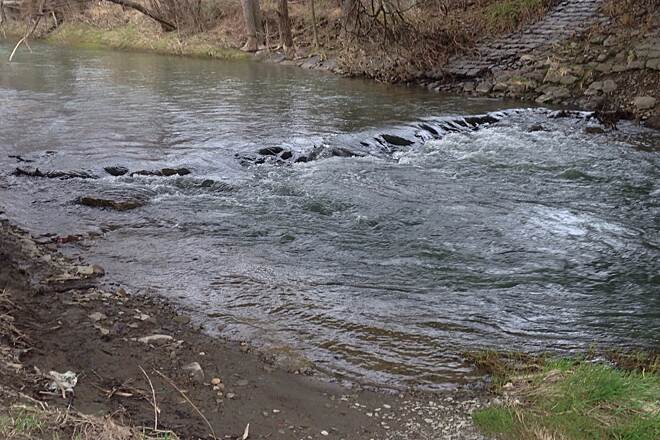 The Lackawanna Rail Trail traces a short stretch of the old Delaware, Lackawanna & Western Railroad from Lowman to Elmira in southern New York. Much of it follows the meandering Chemung River, meaning “place of the big horn” in the local American Indian language. Originally confined within the city limits of Elmira, the trail now extends along the wooded river shoreline on an additional 5-mile segment completed in 2017.

The Delaware, Lackawanna & Western Railroad was completed through Elmira in 1882 as it connected Buffalo, New York, with Hoboken, New Jersey. The popular Phoebe Snow passenger train, advertised as burning cleaner coal than its competitors, traveled this route from 1949 to 1966. The line merged with its rival in 1960 to form the Erie Lackawanna Railroad, which later succumbed to flooding and declining economic conditions.

The first section of trail opened in 2013 in Elmira, a former transportation hub for trains and canalboats and the summer home of writer Mark Twain. City planners are banking on the trail to help revitalize the local economy. The paved trail passes several local destinations, including Eldridge Park, a popular restored amusement park from the early 20th century.

The path starts at a small parking lot in the community of Lowman. It runs close to I-86 for the next 6 miles into Elmira but is screened from the expressway by woods most of the way.

About a mile from the trailhead, you’ll encounter the Chemung River. A tributary of the Susquehanna River, it’s used for canoeing and fishing for bass, trout, rock bass, and smaller sport fish. This section of trail is shaded in the summer and runs atop levees, where you’ll find benches for resting and enjoying the scenery.

The area is rich in Colonial history. The Continental Army battled British forces and their Iroquois allies on a nearby hillside in 1779. The battle is commemorated at the Newtown Battlefield State Park on the other side of I-86, not directly accessible from the trail. After traveling 5.4 miles past the trailhead, you’ll arrive at an old trestle spanning Newtown Creek; this was the location of gristmills in the 1700s.

Entering Elmira, the trail frequently uses old railroad underpasses or overpasses to cross streets. You’ll have to cross four-lane NY 14 on a crosswalk, however, to reach Eldridge Park near the northern end of the trail. The last segment of the Lackawanna Rail Trail goes through the park, which has a vintage carousel, a skate park, a playground, paddleboats, a dog park, and restrooms, as well as the Mark Twain Mini Golf Course & Train Ride. You can also connect to the 1.1-mile Eldridge Park Loop around Eldridge Lake.

A 0.4-mile spur heads east out of the park but is not well marked. A northern extension is planned to bring the Lackawanna Rail Trail closer to the Catharine Valley Trail. The City of Elmira is also working on spur trails to the river for improved fishing access.

To reach the southern endpoint from I-86, take Exit 57, and head south on Lowman Crossover toward Wellsburg. Go 0.1 mile, and look for parking on the right.

Don't be put off by the older, poor reviews

The trail was only extended from Elmira to Lowman recently. The new part is in excellent shape, but there are no amenities between Wegmans and Lowman.
If you make it to Wegmans, Eldridge Park is also worth exploring. Yes, you must cross the highway. Take a walk around the lake or a boat ride. Hopefully, when the pandemic calms down, there will be more to do there.

Directions, parking and trail description all accurate, but there was no fishing access as described. The area as described a out a mile out from the trail head was too steep with rocks and a dense tree and bush line.

Great trail to run on

Great trail for running. I use this trail often to help complete workouts and long runs. Always nice to avoid traffic and have a beautiful view along the way. Trail includes having ability to start in multiple locations.

My wife and I biked this trail with ease, noisy due to proximity to RT 86 but loved it. Ends near a Wegmans so you can get a drink or snack. The ride back to Lowman is very easy as it is downhill, but you don't notice the uphill ride hardly at all.

We parked at the Lowman lot. Rode to Elmira and back. Nice little trail.

Rode the Lackawana Rail Trail end to end, and back, on 5/4/2019. Rode hybrids, No issues. Trail pavement was in excellent condition the entire route. Many benches on newer section of trail. Many views of the Chemung River. Saw many different kinds of birds along river. Parked at trail parking lot near Lowman Crossover. Very easy to find. But only 3 parking spaces and one was for handicaped. Rode the trail to Eldridge Park and around the park loops. One loop is around the lake. A greater loop is around the park. Few or no trail signs. But not an issue because the design is very simple and there are posted maps. Eldridge Park looked well cared for and pleasant to visit. Restrooms available at the park. Didn't see any restrooms along the trail. Saw many trail users (bikers, walkers, & runners) on an overcast & lightly misting morning.

Very difficult to find. No signage in Eldridge Park. The surface is excellent, but the trail runs along the interstate. Noisy and lots of trash along the trail.

Noticed the trail shortly after the highway was rebuilt in that area and finally got a chance to try it out. My wife and I parked near the Lowman end at a parking lot across the freeway. The ride was very pleasant with only a few joggers. We rode to Wegman's in Elmira for a late lunch and then rode back. Pavement was smooth with some small sticks (broken from nearby trees) laying around.
The nearest "restroom" on the Lowman end is about 1/2 mile south of the trailhead. There are two porta-johns at the fishing access ramp. There are no facilities along the trail as it runs between the highway and the river until it reaches Elmira where it follows the old RR right of way and crosses OVER a few busy streets on old RR bridges. Wegmans is at the western end and they do have restrooms available.
Not a real long trail, but nice nonetheless.

This trail was better than I expected. It's very well marked if you park in the parking lot by 86. I can see how it would be confusing trying to find it from Eldridge. The trail goes in front of Wegmans. There isn't much shade so make sure you bring plenty of water for you AND your dog! There's even a nice spot by the water where you can let your pup cool off. I did the trail plus the smaller loop around Eldridge and back. That was 5.86 miles. Definitely worth checking out!

A much needed trail for Elmira!! I use to ride my bike on Clemons Center Parkway to get to Eldridge Park. Clemons Center Parkway is not bicycle friendly - most drivers are focused only on where they need to get to and don't pay attention to the bikers; then there are the evil spirited drivers who deliberately try to run bicycles off the road. The Lackawanna Rail Trail is safe, it's paved and for the most part it is well kept by the City of Elmira. My husband now also enjoys riding his bike on the trail. We love it!

It's a good short ride on asphalt. Around 3 miles one way. Park across from Kennedy valve at the truck lot. There are several parking places for cars. Or park at the wegmans off hey 14. The trail runs inundating of wegmans

Went to Eldridge park and E Water Street. If this trail exists its practically invisible. From what I hear its a glorified sidewalk more than a rail trail anyway. 0/10 would not recommend.

Whent to Eldridge Park, No signs for trail, could not find trail.Road around streets looking Gave up & left. Sad