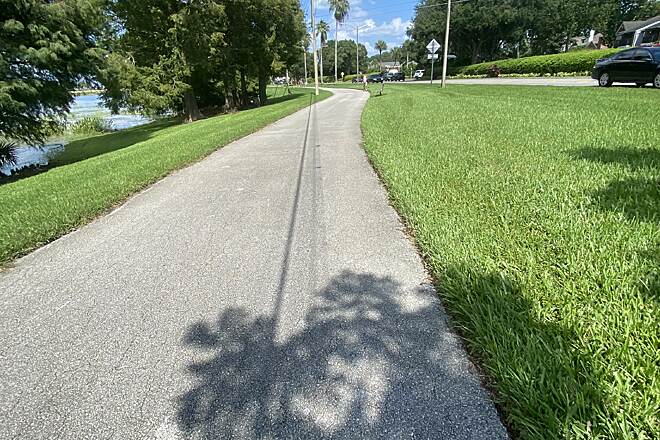 The Lake Underhill Path is a greenway linking four parks in Orlando near the Orlando Executive Airport in downtown Orlando. Work out stations dot the length of the trail, which is why you might hear this path being called the Orlando Fitness Trail. It’s a separated from traffic making it a low-stress route for biking and walking, although there are some grade-level crossings as well as two underpasses.

The trail kicks off on Fairgreen Street and heads south along Maguire Boulevard, along the edge of the airport. Festival Street is the first park you’ll encounter, although you’d have to cross Maguire Boulevard to do so. The 16-acre park features a community garden, skate park and beach volleyball courts. Continuing south along Crystal Lake Drive down to SR 408, you’ll arrive at the second park: Colonel Joe Kittinger Park, named after a Vietnam veteran and hometown hero whose Vietnam-era F-4 jet is on display within the park. The park also features a playground and pavilion.

Cross underneath SR 408 to reach the southern half of Lake Underhill. The trail skirts the southern shore of the lake, connecting West Underhill Park to Lake Underhill Park. Again, here you will find fitness stations as well as benches and trash receptacles, but with the added bonus of panoramic lake views with the SR 408 bridge in the distance. The trail is wide and inviting; there’s plenty of room for different kinds of users to share the path. Another highlight, is that there is a bike-ped connection along the SR 408 bridge, meaning you can complete a circuit of the lower half of the lake, switch up your viewpoint. The loop is 1.3 miles around.

Past Lake Underhill Park, if you choose not to complete the loop, you can continue east across SR 15 and back under SR 408 to reach the final park, the Park of the Americas. Here you’ll find amenities ranging from pavilions, picnic tables and grills for those perfect summer days, to a dog park where four-legged companions can get their own workouts.

While the Lake Underhill is not the longest path in Orlando, it packs a lot into its length. That said, there are plans to connect it to the Cady Way Trail.

Park at the parks along the route:

Connecting from the Orlando Urban trail

If you are ending the Orlando Urban trail at Magnolia or Orange Ave. continue on any of these streets south until you reach Livingston St. then make a left (go east). This will dead end at Maguire Blvd at which point you will have to turn right (go south). Maguire will turn into N. Crystal Lake Dr. This is where this trail starts. You can make circles around Lake Underhill park for more miles. Every time I’ve gone there, there are plenty of ppl around jogging, walking, biking. I saw otters one time near the edge of the lake.