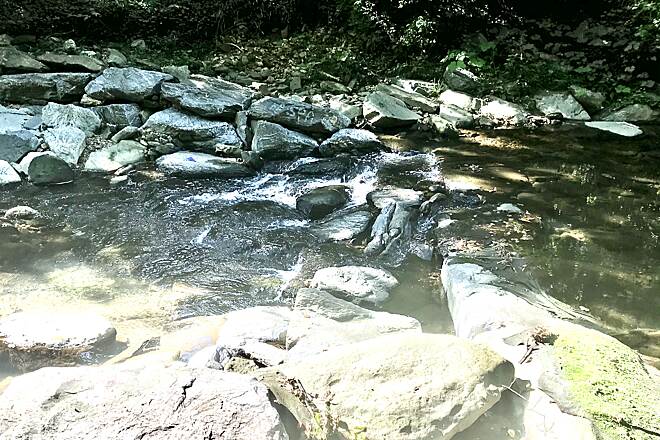 Little Falls Trail is a hike-and-bike pathway in Montgomery County, Maryland. Winding through parks and along creeks, the trail runs parallel to the popular Capital Crescent Trail for part of its length. The trail allows residents to enjoy and explore their little slice of nature.

The trail exists in two segments. The upper (north) segment runs from Norwood Local Park to Dorset Avenue. This neighborhood park in Bethesda features playgrounds as well as a variety of athletic facilities for soccer, softball, basketball and tennis. From the southwest corner of the parking lot, the asphalt trail traces the perimeter of the park, past the rolling green spaces and then enters a more woodsy area as it begins to parallel the Willet Branch. That segment ends on Dorset Avenue.

The lower segment picks up about a mile south on Massachusetts Avenue/ SR 396. This stretch of trail is considered the more scenic of the two, winding through Little Falls Stream Valley Park until MacArthur Boulevard. The park is home to Little Falls Branch, a tributary of the Potomac River. Resident wildlife include small mammals like foxes and a variety of birdlife.

For the south segment, there is a gravel parking area along the parkway, just north of Mass Ave., as well as several access points from local neighborhoods. To connect from the upper trail to the lower trail, although one can choose to ride with the traffic on Little Falls Parkway, there's also the less harrowing option of bridging the Dorset Avenue-Mass. Avenue gap via the Capital Crescent Trail. At Dorset Avenue, cross the parkway and head west on the sidewalk until you find the CCT access point. Once you get to Mass. Ave you can branch from the CCT and head east back to the Little Falls Trail.

Two-legged, two-wheeled and four-legged visitors are welcome on the trail, which is open from dawn to dusk.

In addition to the gravel lot at Massachusetts Avenue and Little Falls Parkway, visitors to the lower portion can also park at Westmoreland Hills Local Park (5315 Elliott Rd, Bethesda, MD 20816)

The north section is in a very nice neighborhood park, but the southern section steals the show. It is usually uncrowded and the views of the creek are stunning. This is my favorite trail section in MoCo so far.

The north section is in a very nice neighborhood park, but the southern section steals the show. It is usually uncrowded and the views of the creek are stunning. This is my favorite trail section in MoCo so far.