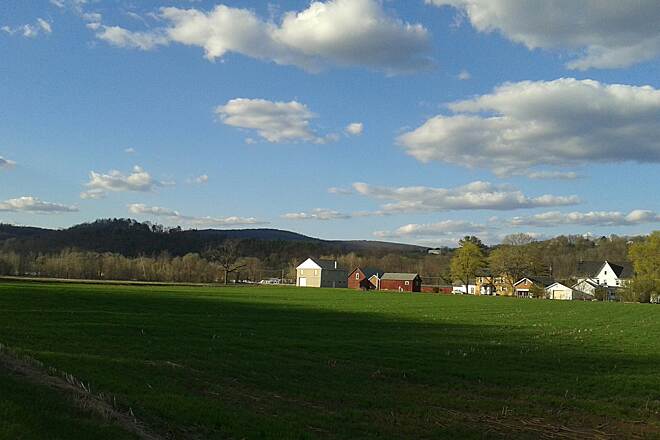 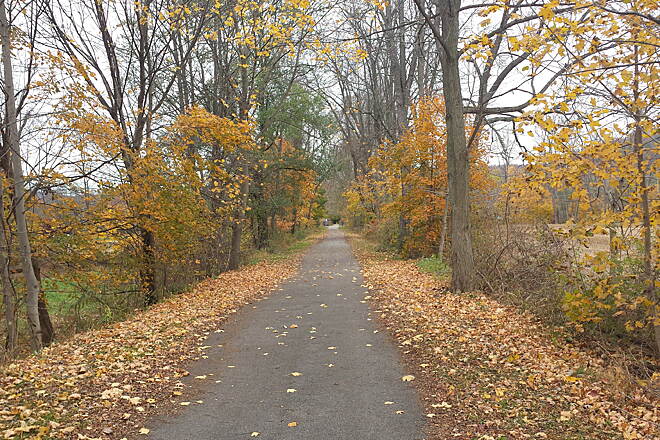 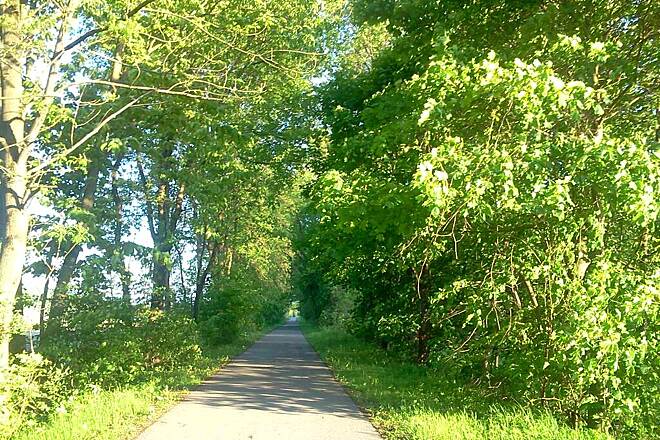 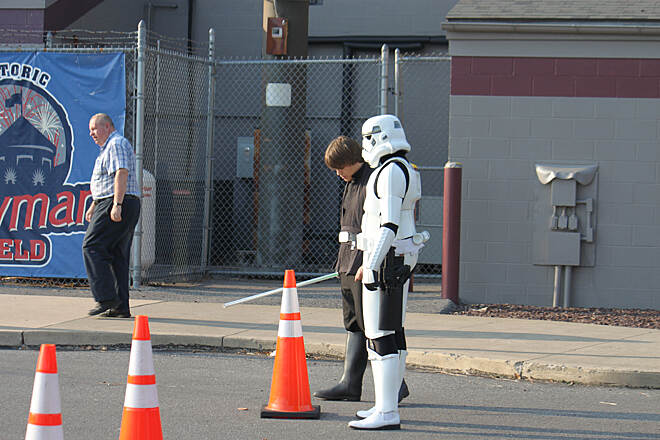 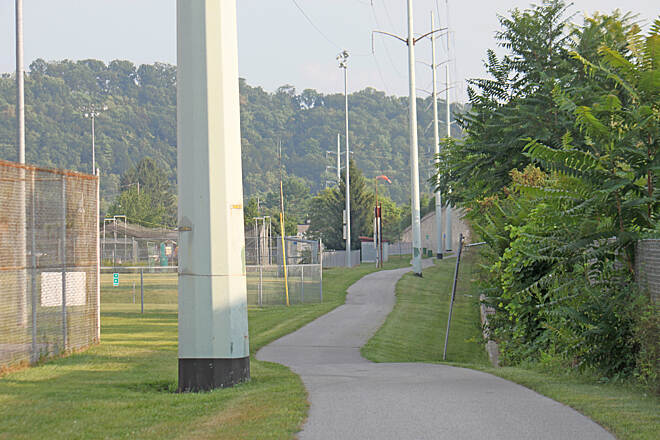 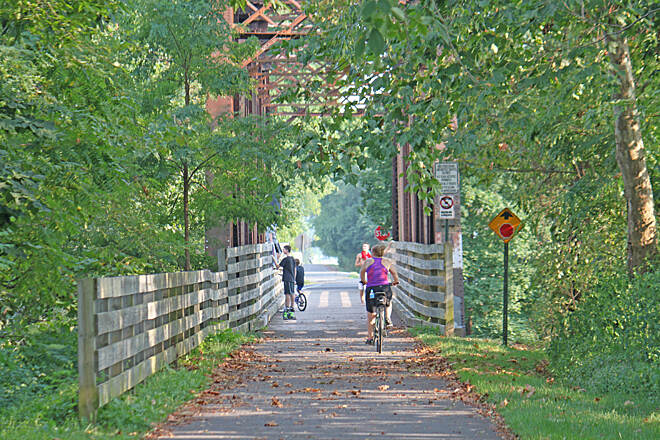 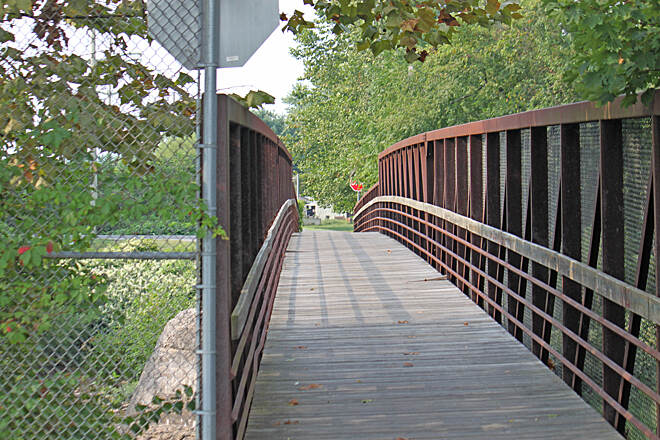 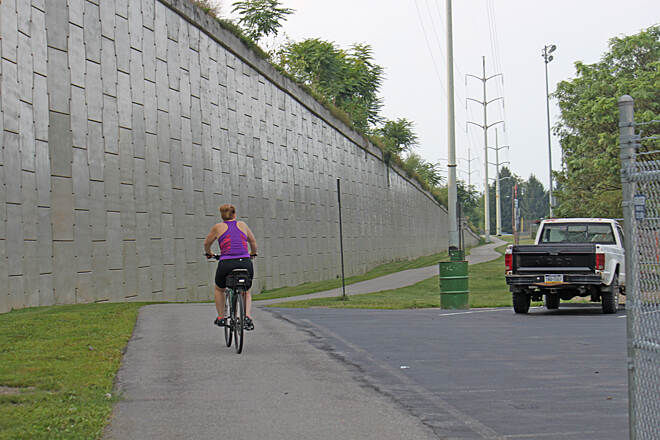 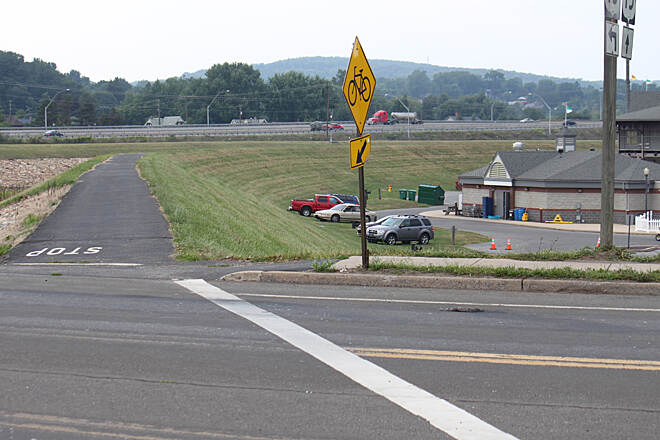 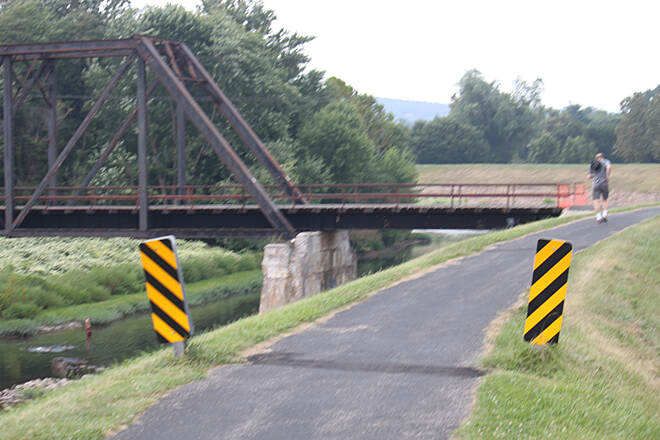 The Lycoming Creek Bikeway parallels a creek of the same name from Hepburnville to Williamsport in Central Pennsylvania. The 5.3-mile paved trail connects a village formerly named Eeltown due to the preponderance of slimy critters found in the creek there to a city once called the Lumber Capital of the World. Along the way, it passes the site of sandlots where organized Little League Baseball was first played.

It’s no surprise that the Williamsport and Elmira Railroad chose the Lycoming Creek valley for a segment of railway begun in 1839. The route, which the Lycoming Creek Bikeway now follows, was originally used by American Indians and early settlers as a shortcut through the mountains between two branches of the Susquehanna River. The rail line later became part of the Northern Central Railway and the Pennsylvania Railroad, the Penn Central, and its successors until it fell into disuse in 1972.

Although it runs through the hilly Appalachian Plateau, the Lycoming Creek Bikeway is generally flat. Plans call for extending the nearby Susquehanna River Walk to the Third Street trailhead. The trail follows alongside US 15 most of the way, and there are several road crossings along the route.

Beginning at the athletic fields in Hepburnville, the trail immediately crosses Lycoming Creek and passes through a short stretch of cropland and the village of Fairlawn before crossing another railroad trestle that dates to 1901.

Passing through residential Heshbon Park, you’ll cross a pedestrian bridge over the creek and roll along at the base of a sound wall that separates the highway from the neighborhood on your left. At 3.3 miles, the trail passes a sports park in the Garden View community; fast food and markets are nearby.

A bit farther, the trail turns right at Mill Lane to pass underneath US 15 and trace the highway on the west side for 0.8 mile to Memorial Avenue. There it turns left, goes underneath US 15 again, and crosses Lycoming Creek one last time before heading south atop a levee. Flooding in 1996 caused property damage and loss of life in Williamsport.

The trail passes the home field of the Williamsport Crosscutters minor league baseball team, the name an homage to the city’s lumber industry heritage. A sandlot baseball diamond in this area gave rise to organized Little League Baseball in 1939. The annual Little League World Series is held nearby in South Williamsport.

Many Victorian-era mansions can be found on Millionaires Row, a National Register of Historic Places site about a mile east of the trail’s end on Third Street.

To reach the northern trailhead from I-180 W in Williamsport, go to the end of the interstate, near mile marker 29; head right onto US 15 N; and follow the directions above.

To reach parking near the southern endpoint at Memorial Park in Williamsport from US 220, take Exit 29 and head north on US 15. Go 0.6 mile, and take the exit toward W. Third St. Turn right onto W. Third St., and go 0.6 mile. Turn left onto Rose St., go 0.1 mile, and turn left onto W. Fourth St. In 0.7 mile turn right into the parking lot. Note: The lot shares space with the parking lot for Historic Bowman Field. To find the trail after parking, return to the sidewalk on Fourth St., turn right, and go 500 feet to the trail. Turn left on the path and go 0.5 mile to the southern endpoint; turn right to go north to Hepburnville.

To reach parking near the southern endpoint at Memorial Park from I-180 W, go to the end of the interstate, near mile marker 29, and head right onto US 15 N. Follow the directions above from US 15 to Memorial Park.

Nice trail. Relatively flat, although we did have a hard time finding the trailhead. Parked behind stadium in Williamsport. Trail goes through both urban and rural areas. Good for all, levels of riders.

Nice trail. Relatively flat, although we did have a hard time finding the trailhead. Parked behind stadium in Williamsport. Trail goes through both urban and rural areas. Good for all, levels of riders.

I've biked it several times from Hepburnville to Wendy's and back. Comes out to close to 30 miles round-trip. Real nice riding along the river across from Williamsport city, Williamsport side.

I've biked it several times from Hepburnville to Wendy's and back. Comes out to close to 30 miles round-trip. Real nice riding along the river across from Williamsport city, Williamsport side.

Walking today was wonderful. The path took us over the loyalsock creek and the fall colors were great. My dog loved it also. Looking at the trail map, seams to not be correct. Can't find were you come to old 15 and what is beyond. Other wise, nice day.

I walk this trail almost daily. Lots of birds, ducks, bunnies and other small animals. A beautiful relaxing walk. So glad it's part of my routine.

Enjoyable ride paved the entire way. The southern part of the trail requires you to cross several very busy streets in the city. I prefer to start my ride by the Lycoming township municipal building to avoid My wife and I do the trail on our beach cruisers and ios a very easy ride.