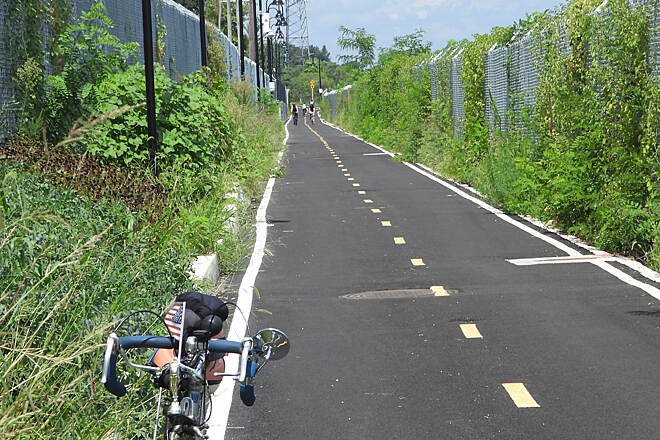 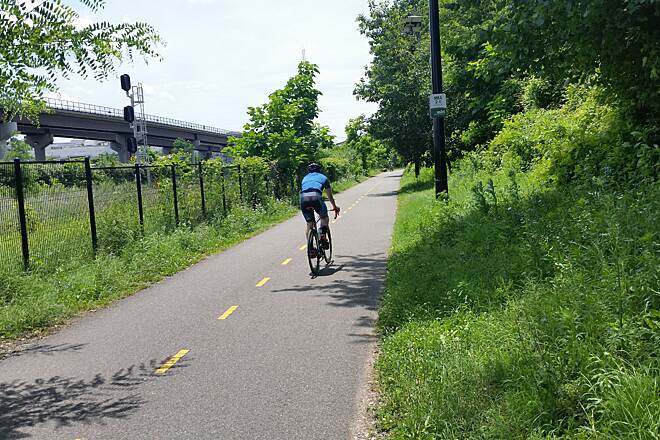 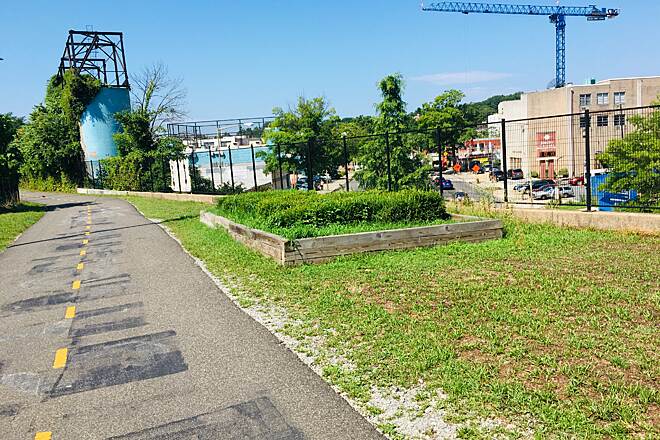 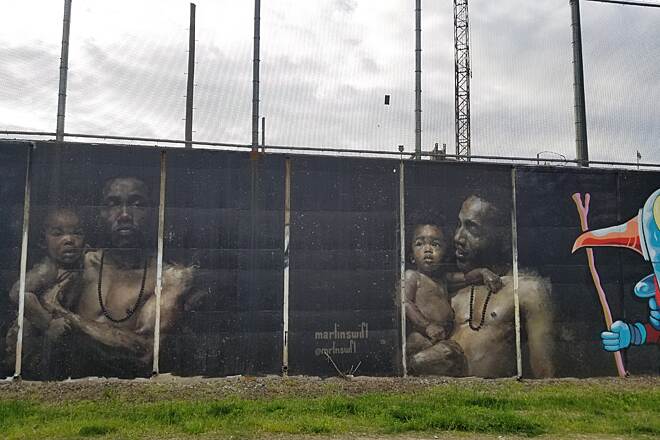 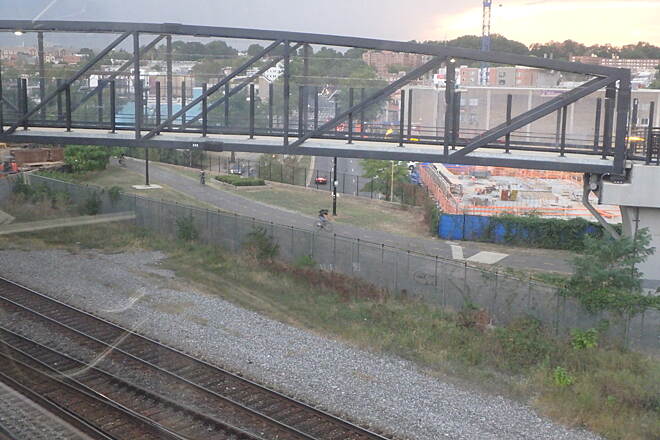 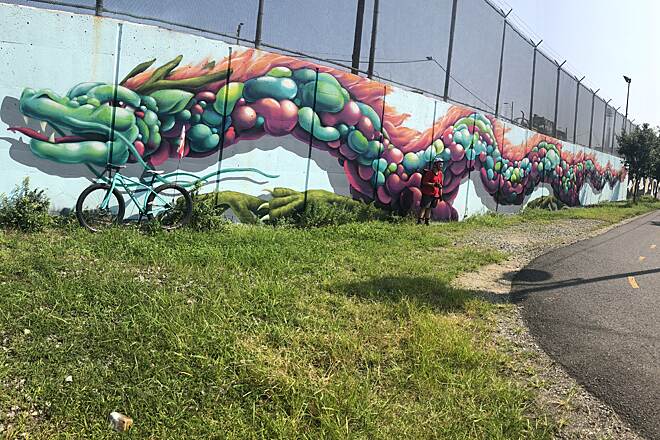 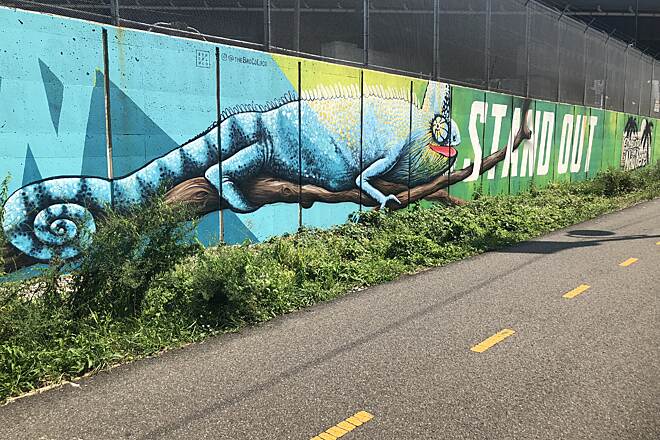 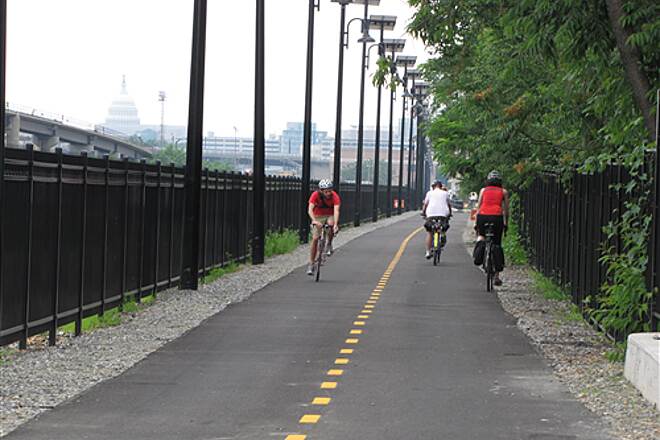 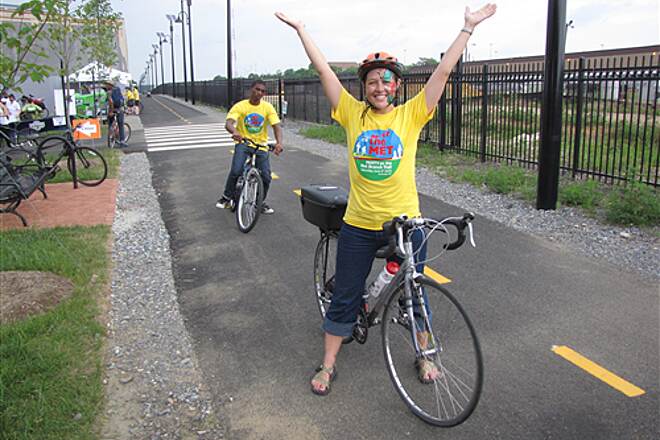 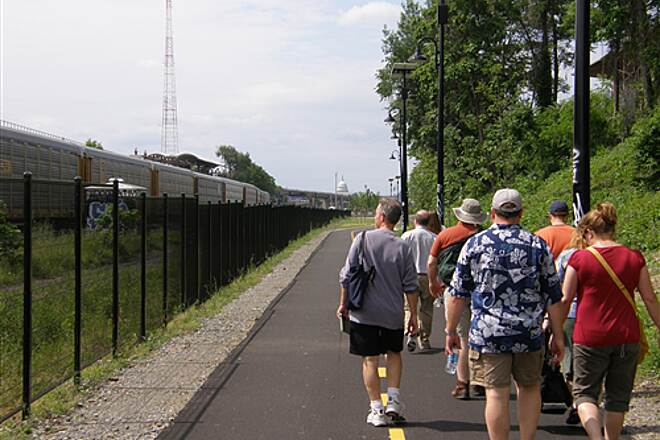 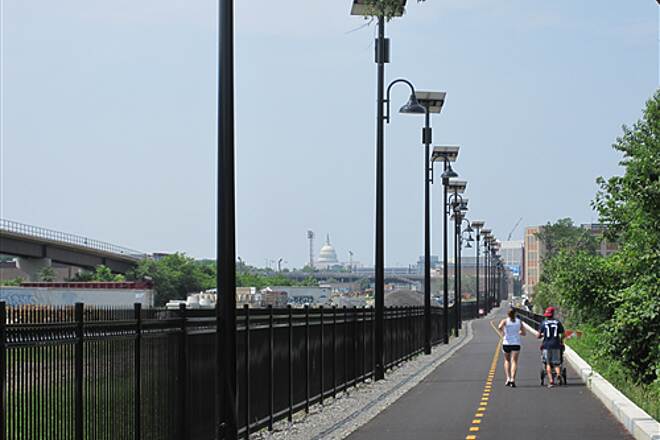 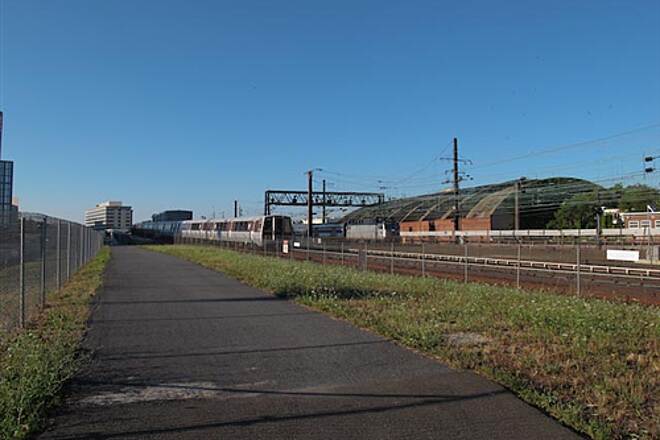 The Metropolitan Branch Trail (MBT)—a former piece of the Baltimore and Ohio Railroad (B&O)—serves as a heartbeat of the capital, serving thousands of commuters and recreational trail users as it connects some of the city’s most historic and burgeoning neighborhoods. It will eventually comprise 8 miles of trail or separated walking and bicycling facilities, from Washington, D.C.’s Union Station to Silver Spring, Maryland. The trail is also a key segment of the developing 800-mile Capital Trails Coalition network, a Rails-to-Trails Conservancy TrailNation project that aims to connect the Washington, D.C., metropolitan region by multiuse trail.

Following the route of the B&O’s Metropolitan Branch line, the MBT, also called the Met Branch Trail, is a busy, urban rail-with-trail that is ad-jacent to Metro’s Red Line, MARC commuter service, CSX freight trains, and Amtrak. Currently, the trail stretches for about 4 miles between Union Station and Fort Totten, with most of the remaining 4 miles to Silver Spring being a signed, on-street bike route or side paths.

While most of the trails in D.C. are flanked by foliage and water, the MBT features vibrant artwork and a series of revolving murals and pro-vides safe off-road access to community destinations, business areas, and residential areas for thousands of residents and visitors.

Beginning at Union Station at First Street Northeast, the on-road trail heads east then north along a wide side path along Second Street Northeast. At L Street, it heads west under railroad tracks and becomes an off-road pathway for 1.5 miles, to Franklin Street in Edgewood. On this section of trail, you can link to many Northeast D.C. neighborhoods, including NoMa, Eckington, Edgewood, and Brookland, via grade-separated crossings of Rhode Island, New York, and Florida Avenues.

Just after crossing under New York Avenue, you’ll find Alethia Tanner Park on your left. The park was completed in 2020 and includes a playground, a dog park, plaza areas, and gardens.

Continuing north from Franklin Street, the trail is routed on Eighth Street Northeast for just under 0.5 mile to Monroe Street Northeast and the Edgewood Arts Building in an area known as The Arts Walk. Here, you’ll find galleries, studios, and Monroe Street Market, which offers an eclectic array of eateries and a few shops.

You’ll head one block west on Monroe, one block north on Seventh Street Northeast, and one block east on Michigan Avenue Northeast before being routed north and along a side path on John McCormack Road near Catholic University. From here, the MBT follows a signed on-street bike route to Takoma Park, where a small section of off-road trail crosses the border between D.C. and Maryland. The trail ends at the Silver Spring Metro station on Colesville Road.

Construction and planning to fill in multiple sections of on-road trail and build new sections of off-road trail, and to create a direct connection with an extended Capital Crescent Trail in Silver Spring, are in progress. For more information, go to the Capital Trails Coalition website.

While there is not dedicated parking for the trail, the trail is accessible via Metro at the following stations: Union, NoMa–Gallaudet U, Rhode Island Ave–Brentwood, Brookland–CUA, Fort Totten, and Takoma. The trail is also accessible via Amtrak and MARC at Union Station in Washington, D.C.

Love the artwork and the close proximity to many rest stops and places to eat & drink. I live in Alexandria, VA so I started on the Mount Vernon Trail, came into the city over the 14th Street bridge. Connected to the 15th Street cycle track to Pennsylvania Ave cycle track toward Union Station. Entered the MBT from Union Station. Looking forward to the continued work past Fort Totten. Felt so good to have all of this dedicated bike infrastructure. And it's only going to get better - so I'm saving that 5th star for the future :)

Great resource in the heart of the city

First ride today. A few places impacted by construction, but in great shape overall and quick ride from upper Northeast to NoMa. And wow, the street art along the way!

This trail is good for people who want an urban experience, especially on a weekend morning as the city slowly awakes. Lots of places to stop for food and drinks - even shopping - along the way.

Don't meet the expectations of a trail

Today I decided to try the trails I haven't ride in DC. Anacostia, Sligo, Takoma and Metropolitan Branch. The first three were a nice surprise. The last one, the MBT, was a disappointment. The first 3-4 miles until 8th street are a real trail. Then it becomes a loose segments on road with very poor signs and not well planned. I appreciate all the effort these guys have made but calling it a Trail is really misleading.

Cool urban trail out of DC

I did this trail yesterday for the first time and found it interesting and challenging, especially past the Fort Totten transfer station. It actually is posted to say "End" at the top of this steep grade, so I'm not sure if there IS more trail or not after this point. But it was fun from Union Station. By the way, the entry is actually at Union Station but at 3rd and M Streets NE. It's a little tricky to find but if you actually go to Union Station looking for a trail head you'll be lost. Once you get going it's an interesting trail with lots of urban graffiti and the hum of the metro trains accompanying you. But it's a nice path. Have fun.

Well marked and paved, goes straight up from DC. I've commuted on this numerous times and appreciate the effort put in to building something that actually takes you places, including a couple of metro stations.

I tried the new MBT from Union Station (southern terminus) northward, during July. The southern half is well marked EXCEPT for the section from the roadside trail (on sidewalk) to the off street dedicated trail at the Greyhound Bus Station. The trail signs lead to a set of stairs south side of the station, after passing under the railroad tracks. However, the bicycle RAMPS a block further north, at the northeast corner of the bus station. This should be corrected. Traveling along the dedicated trail from there is okay, fairly level grade, but in the summer time it is very very hot. There is little to no shade, and being adjacent to an active railroad yard, there is a lot of heat build up along the tracks. Not that it is a hard ride, just that I would not recommend it on hot days, especially for children. Once I got what should be about the halfway mark, the designated trail hits construction (07/12), then the markings become sparse and unclear. The landmark is Columbia University. Beyond CU the trail parallels an access road that serves a refuse transfer station. Again, not recommended on a hot day. Once past the transfer station, the grade becomes very VERY challenging, and the trail signs become unclear. I took what the map showed as being the trail up to Fort Totten (a park and Metro stop). I believe this is the interim section, but the change in elevation in a short distance makes this a very challenging section. I am by no means a novice, but it was really tough. The MBT is supposed to go to Silver Sring, MD, where it will connect to a number of fine trails. Unfortunately, I could not find any markers, and the one bike lane I found led to the south side of Tacoma and Tacoma Park, and another extreme grade (and no trail markers). I will try the MBT from the Silver Spring terminus later this fall (when it is cooler!), and post a review, to see if it is posted any better. Once completed, it should make an excellent, if challenging, addition to the DC netwrok.