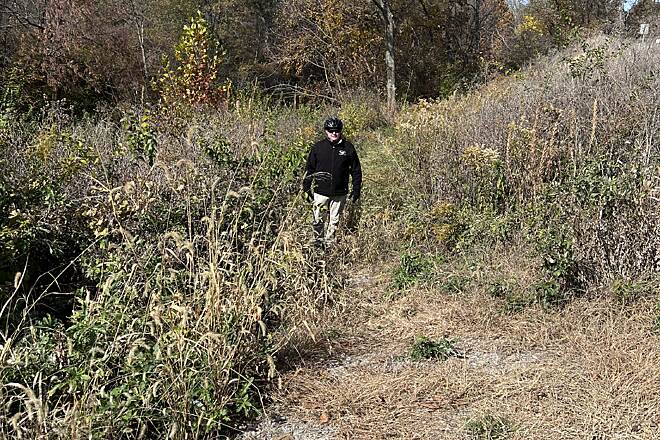 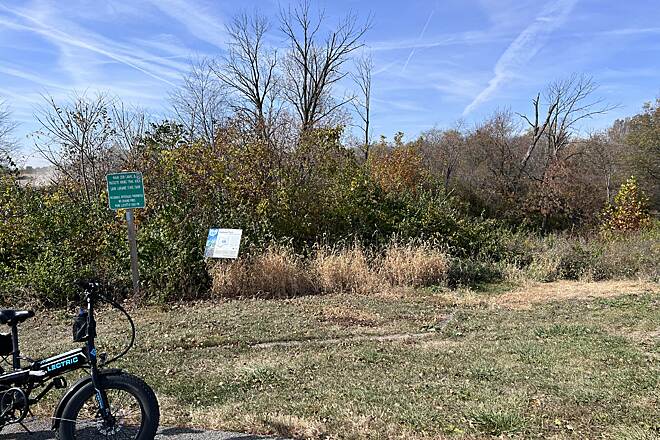 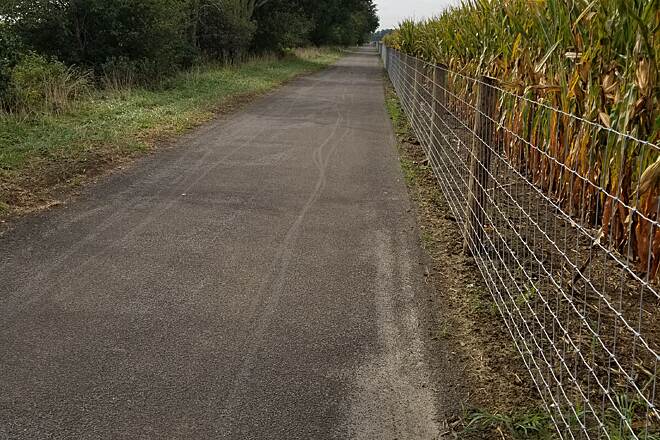 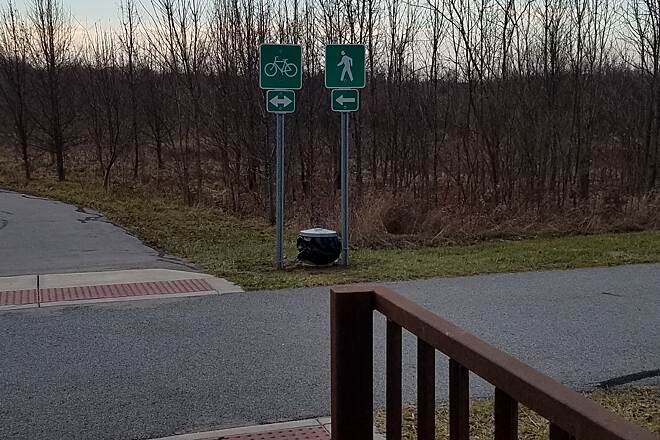 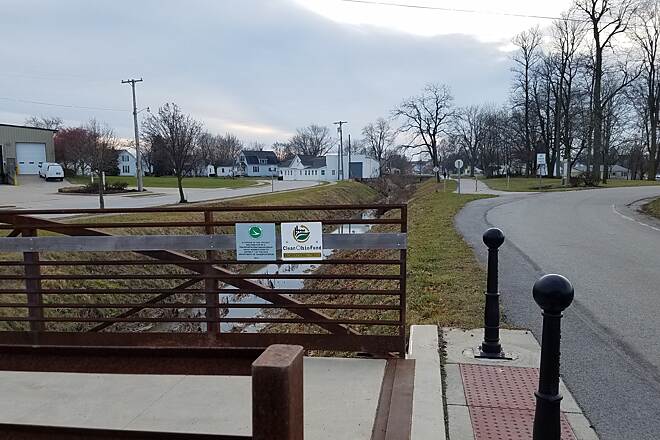 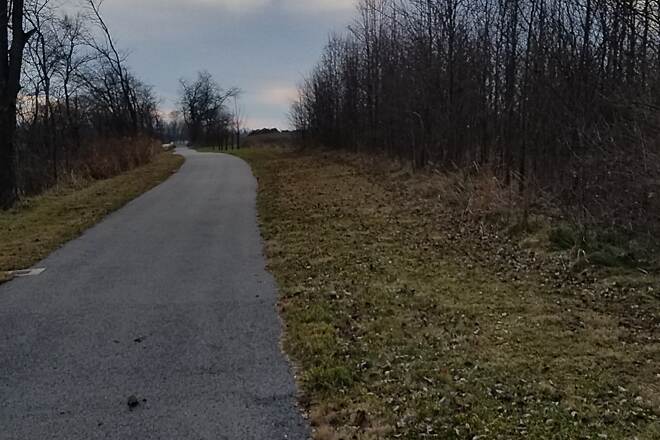 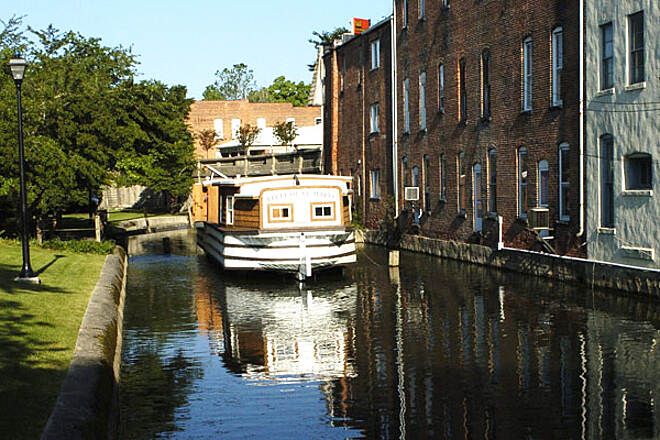 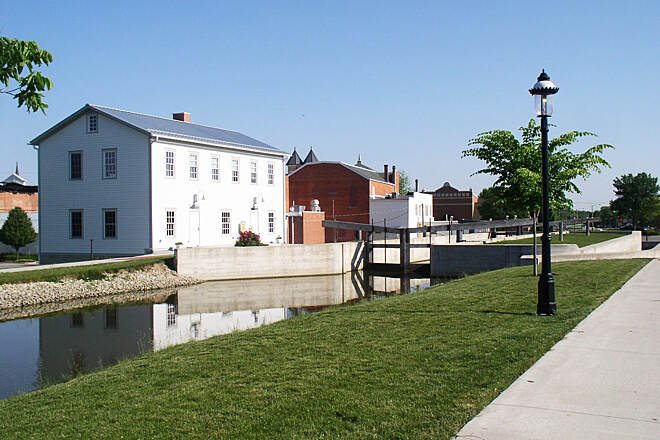 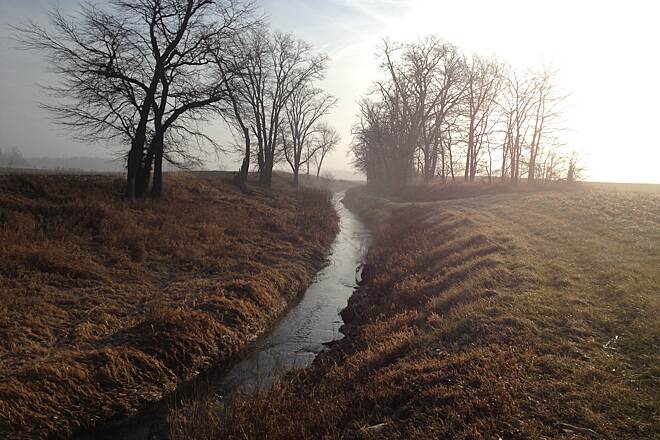 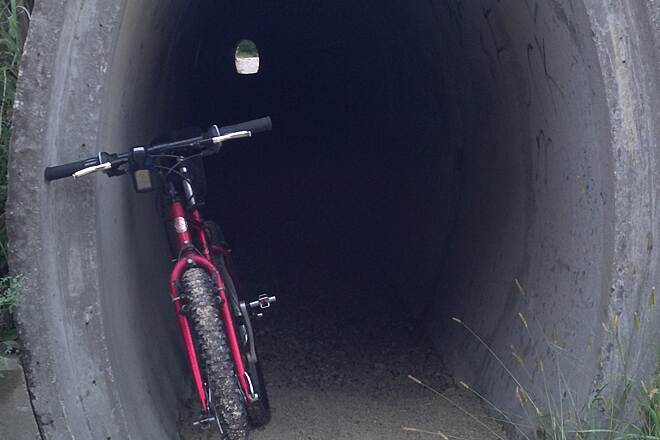 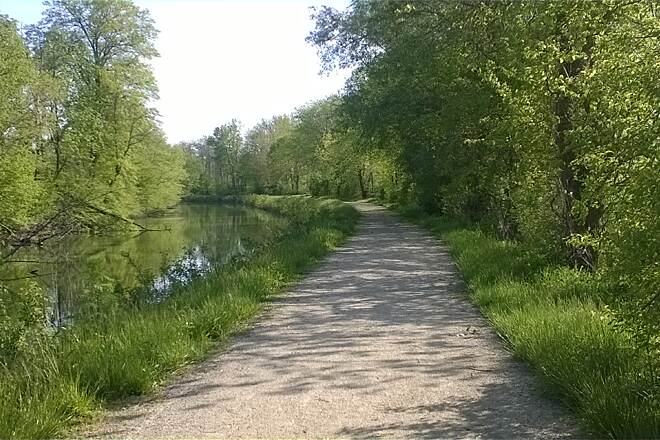 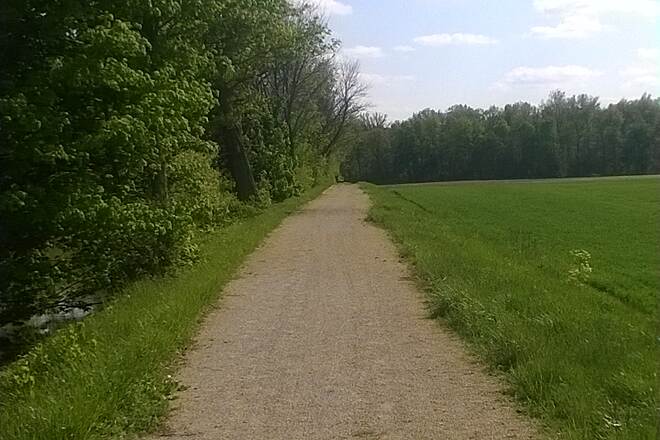 Today, the Miami & Erie Canal Trail spans nearly 40 miles from Delphos to Fort Loramie, passing through many quaint western Ohio towns and villages. Numerous locks, spillways and historic buildings remain from the canal era, and much of the local history has been preserved in the many museums located along the corridor. Note that its surface is largely unpaved and varies greatly along the route.

Parking and access is available along the corridor in Delphos, Spencerville, St. Marys, New Bremen, Minister and Fort Loramie.

We live just 20 miles from this path. And did it for the first time yesterday. We did New Breman to St Marys. Started out beautiful but a mile out of town we lost the path. Only to find out it is a grass path between the canal and a corn field. Would be beautiful quiet walking path. But for sure not for bikes. We cut around and did some back roads and tried again further north. But the whole way from NB to SM is grass. May need to check out further south.

st marys to be Bremen

Nice easy path. There was one tree down that was easy to get around. We did our route on horse back.

I tried to ride from New Bremen to St. Mary’s. I read some reviews, but it wasn’t clear. I also talked via phone to someone who lives in New Bremen and he encouraged me to take the path. Well, 1 mile north of town it was just tall thick grass. Had to do a detour on busy roads

I had difficulty finding a parking area near Delphos - mainly because there is no trail head there. I found a nice park in Spencerville next to the trail, but was disappointed that the trail end shortly south of there. You would need to follow roads to complete 40 miles. Spencerville to Delphos was a nice flat crushed stone trail, but ended abruptly at someone’s back yard. As another review mentioned - a diamond in the rough, will be a great trail as more miles are finished.

The path is very nice! We found a nice parking lot/rest area on Zion church road. The path is kept up nicely and shaded most of the way with a tree line. One side is the canal/tree line and the other side is fenced nicely. The way the trees face it would block morning sun. We walked around 7pm. It took about an hour to walk for 4.5-5mile walk into Delphos. Be aware it does abruptly end and turn into grass by a trailer park, but it is easy to get to the road from there.

Caught the trail at Old Acadia Park in Spencerville. 8 mile ride up to Delphos where trail abruptly changed to grass. Nice crushed gravel, well maintained flat trail, no benches or rest stops in this section though. Canal on one side and fields on the other, a pleasant ride.

Diamond in the rough

Looking for a tough assignment? Try this one. I might be the first reviewer to have done this trail from end to end. This is the slowest 36 miles that I have ever done.

Why do it? My interest in the Miami and Erie Canal started as a kid, as the canal was part of the backyard of my parents' house near Dayton, about an hour's drive south.

In 2019, I set out to do this trail from its beginning in Ft, Loramie Ohio to its end in Delphos Ohio. It took me three attempts.

Some facts: The entire 274 mile length of the Miami and Erie Canal started in Cincinnati and ended somewhere near Toledo. This particular "Miami and Erie Canal Trail" trail covers about 36 miles of it. Another reviewer referred to "Farnsworth" ...actually, that is a misplaced review that belongs to the "Towpath Trail" which is not this trail, but easy to be confused, as that trail also is along a more northerly section of the same Miami and Erie Canal. (BTW the Towpath Trail is much easier than this one.)

It took me three tries to finish the Miami and Erie Trail (e.g., see comment about culvert) but it's feasible to do it in one trip if you know where you are going.

While the trail is "good," as in clearly marked, and hikers have no problem, it is not easy to cycle with a few exceptions. You will need a mountain bike to take it from end to end. Forget about taking your kid along for this one - it's really rugged in spots. Some parts of the trail are hard-paved, others are graveled, but much is grassland along the edge of farmers fields. Sometimes the trail disappears and you are riding the adjacent road.

Fort Loramie - In a word: disconnected. Go to the State Park and ride along the lake's edge on the road side, and do a quick tour of the park. The lake was a feeder to the canal. It's placid and pretty. Ride the road along the canal hiking trail, then you will come to Ohio Rt 66, and realize that the bike path isn't really there...it's someone's backyard, or - across the road - a rough uncut farmers field with ground hog burrows under the uncut grass. That might be Ok for hiking, but not for bikes. If you want to make it to Minster-New Bremen, then load the bike on your car, or ride the edge of OH 66.

Minster-New Bremen - this is a nice stretch, the trail is a mix of graveled and hard-paved path and canal-side streets. Stop at the AWESOME WORLD CLASS!!! Bicycle Museum of America. On display is the world's first bicycle .. the real deal.

Going north, expect the paving to be excellent for awhile, and suddenly you are riding through rough grassland along the edge of farm fields. Get used to it and enjoy the solitude and the relaxed speed of 6 mph. Sometimes you are on tire tracks in the woods. Nice!

As you approach St. Mary's OH. you realize you are again in people's yards, so you go back onto Ohio Rt 66 for a bit. Go into Geiger Park and get back in the trail, see the canal boat in the center of town, and then,,,you might get lost (as I did), ask for directions, it's OK. Friendly locals. Suddenly, you are dead-ended at a culvert (just too small and wet to be reasonable for biker, but a hiker, hmmm) that goes under the divided highway. Later, you learn that you were supposed to go left at the culvert, and cycle on the grass along the highway, go under the bridge, and you are back on track. It gets nice with 40 acre lake.

After St, Mary's comes Kossuth, then Spencerville - lots of grass pedaling until you reach the adjacent gravel pit, where the the trail is paved with stone chips. Nice!

Then continue onto Delphos, which is quizzical. What do they have in mind as they newly pave the trail (in process as I write this) but come to a dead-halt in someone's backyard?

Overall, a tough and sometimes confusing path combined with the world class bicycle museum. Glad to have done it.

Love having this in my backyard

As a Saint Mary’s resident living a few blocks from a trailhead (High Street) I love being able to just take,off on my bike, no transporting said bike to the park required. Parts of the trail are smooth sailing, parts are very rough... but it’s flat and beautiful. If you have any trail riding/mountain biking experience, this will be an easy ride for you headed North from St Mary’s. South is harder, longer prairie grass can slow you down or make you walk your bike. Always hoping for more trail improvements to make riding even better.

The stretch from Bloody Bridge to St Mary's brings you very close to the canal, and the scenic farm land, forests, and ponds make it a memorable hike.

The Bloody Bridge parking situation is pretty carefree, so don't expect too much. Starting the trail from Bloody Bridge and going South is slightly confusing because you can take two routes.

First, you can walk next to the canal until you get to 66, but this part does not have gravel (at least when we went) and the grass may be high if they haven't mowed lately. Your other option is to walk the road that parallels the canal, until it dead ends into 66. We did both, but will probably stick to the road in the future because the path has some sink holes.

The big stops on this stretch are Lock 14, and the massive 40 acre ponds. Lock 14 is very scenic, and worth stopping to investigate. Per the Canal Booklet - Originally wooden, this lock was converted to concrete in 1907. The 2003 renovation includes a pedestrian bridge and parking lot. The booklet also mentions the 40 acre ponds were created as a result of the canal crossing the St. Marys river flood plane. The area next to the ponds is very peaceful, and is a standout feature on this part of the trail.

The Bloody Bridge to St Marys stretch of the Miami & Erie Canal Towpath really provides a nice scenic walk by the canal that I highly recommend. If you're looking for an off-cement walk, next to a canal and several large ponds, I think this hike is the perfect site.

The canal was easy to find, but not the trail. We were looking for maybe a small parking lot and a sign proclaiming the trail beginning. It turns out one walks along the canal. We intended to use this trail as a bike path. We decided to park at the (Very Nice) War Memorial and ride until we came to be riding along the canal through people's yards. There was a sign at the edge of Delphos stating "No Biking". We parked the bikes and decided to walk. We felt a little awkward walking through people's backyards but continued to a large farmers field. There were several large holes along the path hidden by the high grass. Walking we saw them but maybe not on a bike. I would not recommend this trail.

My sister and I did this trail on the morning of Aug 10th, 2015. We actually started at Deep Cut Rd. and went on to St. Marys. The first mile or two was not cleared very well. ( Unless you were suppose to be on the side road, Delphos St Marys Road that parallels it) Which we did for the most part. Other than that, it was one of the most beautiful hikes we have taken in a long time. I can't wait to get back to Ohio and do another section.

Rode on this trail 6/2011 from Farnsworth Metro Park to Providence then crossed the river to Grand Rapids. Very good road for biking.

Pros:
Great scenery
Many benches for resting along the way
Mostly shaded from the sun
Great geological examples
Cafe's and restaurants in Grand Rapids (Make sure to check out Rita's!)
Well populated with hikers, runners and fellow bikers during the day

Cons:
A few trail sections suffering from water wash-out but no biggie!
A few stretches were newly paved with gravel making travel with a road bike rather taxing

Make sure to take along snacks and water as there are no facilities between Farnsworth and Grand Rapids.