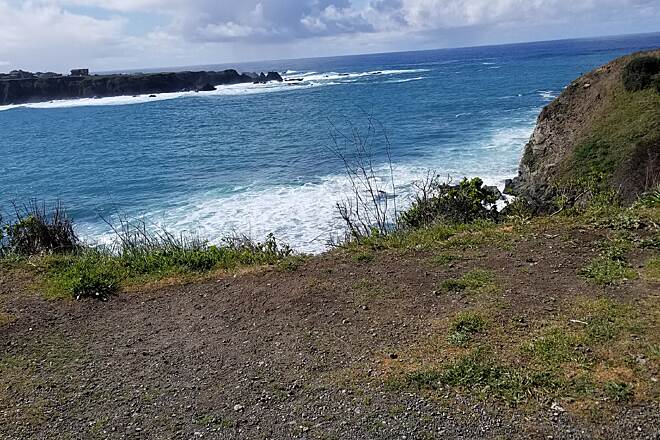 The Noyo Headlands Park and Ka Kahleh Coastal Trail runs alongside the magnificent coastal cliffs of Fort Bragg, offering locals and visitors alike the chance to recreate on land that had been reserved for industrial use for over a hundred years. The name Ka Kahleh comes from the Pomo language, meaning "White Water", and the trail is also sometimes called the Noyo Headlands Coastal Trail or the Fort Bragg Coastal Trail - whatever you choose to call it, the trail offers stunning views and a variety of outdoor experiences that can't be captured in a name.

The southern end of the trail begins in Pomo Bluffs Park, a small city park situated above where the Noyo River empties into the Pacific. The paved path runs east along the bluffs and then cuts through a parking lot, where a set of stairs leads you onto a narrow sidewalk to head north over the bridge that spans the river. Once across, the trail branches off from the road to head west into Noyo Headlands Park, winding its way along the cliffs, with various unpaved running trails splitting off from the main trail. The trail passes by the Crow's Nest Interpretive Center, part of the Noyo Center for Marine Science, which hosts an array of exhibits and hands-on activities relating to the area's aquatic life. During their migratory season from December to April, gray whales can often be seen near the coast, so be sure to bring some binoculars! Interspersed along the path are a number of benches created by local artists from the area's renowned cultural scene, which offer trail users a chance to rest and enjoy the incredible ocean views, and signs along the way detail some of the history of the area as well as information on local wildlife. Continuing north along the cliffs, the trail eventually turns to head alongside Glass Beach Drive, which it parallels until it comes to an end at the historic Pudding Creek Trestle, an original trestle built to allow the railroad to service the lumber mills that once occupied the land. Those who wish to extend their journey can head across the trestle, where the Ten Mile Beach Trail picks up and continues along the coast for another 4 miles of scenic trail.

Parking is available in Pomo Bluffs Park off of Cliff Way at the southern end of the trail, in Noyo Headlands Park off of Cypress Street, and at the trail's northern end on Glass Beach Drive. Restrooms are available at each of those locations, as well as at the Crow's Nest Interpretive Center during operating hours.