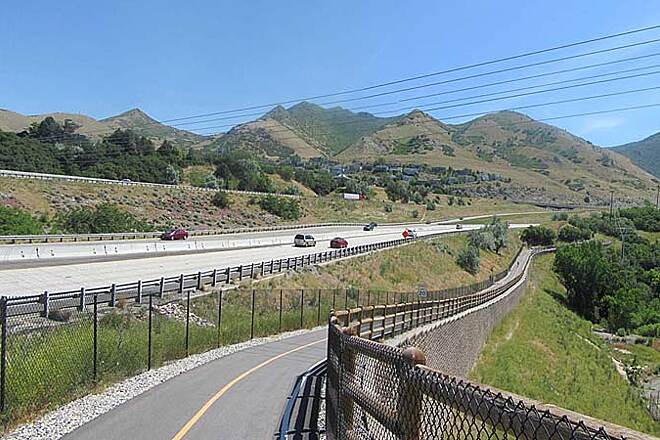 Parley's Trail, when complete, will become the first true off-road transportation and recreation link spanning Salt Lake City from east to west. Much of the trail's route is already open for use, including a rail-with-trail stretch along the Utah Transit Authority's new S Line streetcar.

In the east, the trail begins south of Parley's Canyon, an extraordinarily scenic area despite containing two interstates within. The trail crosses an Interstate 215 ramp on a bridge shared with the Bonneville Shoreline Trail, a planned 280-mile rustic route from Nephi, Utah, to the Idaho border, with long stretches already complete. Continue west on Parley's Trail to cross I-215's main alignment on another trail bridge.

The path soon enters Parley's Historic Nature Park, a 68-acre open space bisected by Parley's Creek. Immediately adjacent to the park is Tanner Park, through which the trail also runs. Take a rest or have a snack at one of the park's benches or picnic tables, although the spots may already be claimed by families watching Little League baseball during the warmer months.

From Tanner Park, a future section of trail will parallel I-80 to Sugar House Park. For now, an interim on-road route primarily via low-stress neighborhood streets is necessary to bridge the gap. Fortunately, the signed route is easy to follow, and bike lanes are available on the busier streets.

A new stretch of trail runs along the southern edge of Sugar House Park, a sprawling area framed by magnificent mountain views. Even those not yet tired from their trek will want to linger here, even if just for a short stroll around the park's pond. The beautiful area is historic, too: Sugar House Prison, Utah's first state prison, was built on the site in 1855, back when Utah was still a territory.

From the park, another new stretch of trail known as "The Draw" passes safely under E. 2100 S. and between two large buildings before emerging into Hidden Hollow Park. The park is hidden indeed, surrounded on all sides by the dense (and increasingly towering) development of Salt Lake City's Sugar House neighborhood. Opened in 1999 on the site of the original Sugar House Park, Hidden Hollow Park lies on both sides of Parley's Creek, offering a vital sense of solitude in the lively neighborhood.

Parley's Trail runs for approximately 1 mile along the streetcar, currently terminating at the South Salt Lake border. Appropriately, the streetcar, trail, kempt landscaping, public plazas and other amenities on the corridor are commonly known together as the S Line Greenway. Access to the streetcar is easy from the rail-with-trail, as it passes four stops on its short route.

In the future, Parley's Trail will be extended west along the S Line through South Salt Lake, eventually reaching the impressive Jordan River Parkway Trail.