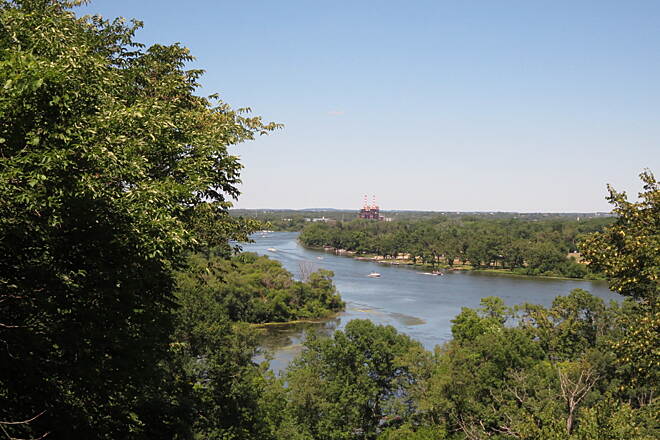 Stretching from Afton to Janesville, the northern section of the Peace Trail offers a paved, tree-shaded route paralleling the Rock River and an active rail line. At its northern end, the trail merges with the Rock River Parkway Trail, which continues east another 2.5 miles along the river. From here, trail-goers can cross County Highway D (Afton Road) to enter Rockport Park, a picturesque open space offering trails, a pool, concession stands, restrooms, a historic farmstead, and the Peace Park Playground.

Another section of the trail, disconnected from the rest, is currently open on the northern outskirts of Beloit. This section spans about 2 miles and enters Big Hill Park, which is nestled along the west bank of the Rock River. The heavily wooded 197-acre park offers hiking trails, an environmental center, picnic areas, and playgrounds.

It's one day hoped to complete the gap between these cities, linking Beloit, Afton, and Janesville by trail.

Trailhead parking is available adjacent to the Janesville Wastewater Plant at the end of Tripp Road. At its northern end, the Fisher Creek parking lot is available near the intersection of County Highway D (Afton Road) and W. Rockport Park Drive. Parking is also available in Rockport Park (2801 Rockport Road).

In Beloit, parking is available in Big Hill Park.

The trail is longer now as it ends at Beloit's Big Hills Park. Scenic ride on new asphalt one section on the road to cross Bass Creek in Afton. Several other short sections on roads but well marked. Go up to the park's observation platform for a vista of the Rock River.

I give this trail 5 stars. It is now a paved ride from Big Hill Park (Beloit) to Janesville Wi.

Nice trail but you should know where to start....

There are some negative reviews on this site about this trail, but they were helpful enough for me to determine where to start. The South-most portion of this trail is not paved and I have not ridden that portion because I have a road bike. However, there is a parking area at 3300 W. Tripp Rd that begins the paved section of the path (right next to a water treatment plant--The water treatment plant can be a bit smelly, but you ride away from it fairly quickly). The path is heavily wooded and runs alongside a train track to the West and the Rock River to the East. Unfortunately you can't see the river from the path, but it appears that there are several side paths you can take to see it if you want to. Also, the TrailLink map shows that there are bathrooms North of W. Tripp Road, but I haven't found them. I suspect that the map information is wrong, or they are further off the path than I have ventured. The closest bathrooms I have found are actually on the Spring Brook path at Palmer Park, which is about 6 miles away from the W. Tripp Rd parking lot. This is a worthwhile path especially since it connects to the Rock River Pathway and Spring Brook Trail paths. As of August 2020, the paved portion of this path is in really good shape.

From Afton south not good washed out and not marked when you get down by Big Hill park. We were lost walked bikes up gravel path didn't realize there was a paved path up the hill cause there are no signs. There are 3 gravel paths we took all 3, 2 ended and 3rd went up the hill. If you end up there take the one that leads to the paved road and follow the road in the park till the trail resumes.

Since 2017 more trail has been paved within the park. Signage and sharrows have been added. The trail north out of the park is crushed limestone as is the next six miles of trail heading towards Janesville. The Rock Trail Coalition is fundraising to pave the north trail out of Big Hill Park. Stay tuned. I'll give it 3 stars for now heading for 5 stars in the future.

We parked at Big Hill Top park inBeloit where I was under the understanding it was going to be a continuous trail of Asphalt and go straight 6.4 miles up towards Janesville. It started out cool with Asphalt going downhill on a winding paved road. At the bottom it ends with no signs of where to go. So we wander around. 1 one leads to a field. The other leads to off road (which was pretty as it was along the river) it leads out to a road that you're supposed to go up to the left a little ways and cross into what looks like a path that hasn't been used in years. We didn't take it because it didn't look rideable. We eventually found another path onto peace trail and decided to give it a go anyways. Ouch! Led through an unused path that hasn't been mowed in months. Led to another road. No signs. No idea where to go. We used the roads to get back to path that was paved and went back to vehicle. Can't say I'll start in Beloit ever again.