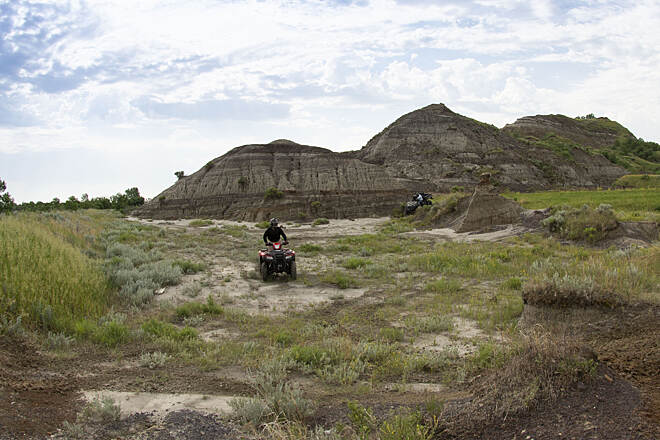 North Dakota's 16-mile Roughrider Trail was built along a former rail corridor south of Bismarck. Theodore Roosevelt's life was shaped by his experiences in North Dakota and the trail takes its name from the "Rough Riders" cavalry unit organized by Roosevelt for the Spanish–American War in 1898.

The unpaved trail can be used for mountain biking, ATVs, and horseback riding, as well as for snowmobile excursions in the winter. It follows the Missouri River and offers scenic views of the bluffs and surrounding landscape. The southern end point is at the Fort Rice Campground, which has a picnic area, fire rings, potable water, RV hookups, and restrooms.

The trailhead is located at the Fort Rice Campground off State Route 1806, about 20 miles south of Fort Abraham Lincoln State Park and 28.6 miles from Mandan. From Mandan, take State Route 1806 south to Fort Rice Road and turn left (east).

Parking is also available nearby at the Sugarloaf Recreation Area (5231 Graner Park Road) in Mandan. From the recreation area, head south on Granger Park Road for 0.8 miles to reach the trail.

There is a movement by Senator Kent Conrad and the Corps of Engineers to construct a trail through this area.

"The Roughrider Trail, as near as I can tell, from Fort Abraham Lincoln State Park south to Fort Rice, exists only in the realm of what can be rather than what is. The rail bed is disconnected as the bridges are all gone, and unless you enjoy riding over a series of overgrown burms and decayed bridge banks, biking is out of the question. It is not encouraged here and according to the ranger--she was miffed that anyone had even heard of this railbed before--even the snowmobilers prefer to ride the ditches in front of it. This is a shame because if this trail were ever developed, at least to the point of supporting biking, it would provide a stupendous, historical ride along the upper reaches of the Missouri.A better ride, which the same ranger suggested and we followed, was along a connecting bike route from the state park north to Mandan then across the river to Bismark. This is 12 miles one way and takes you into a series of the waterfront trails in Bismark where you can witness scores of roudy youth buzzing pontoon boats with their noisy skidoos."