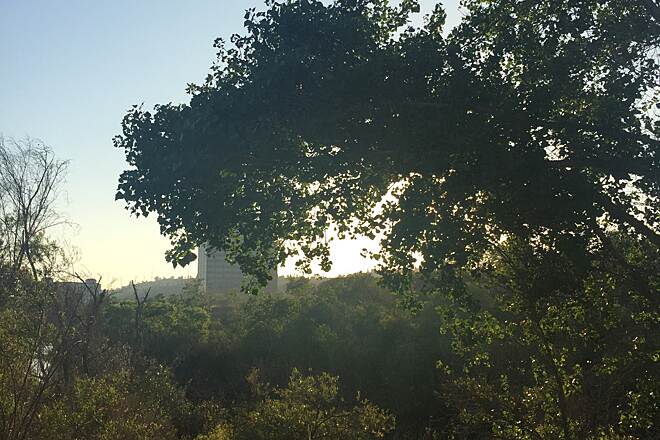 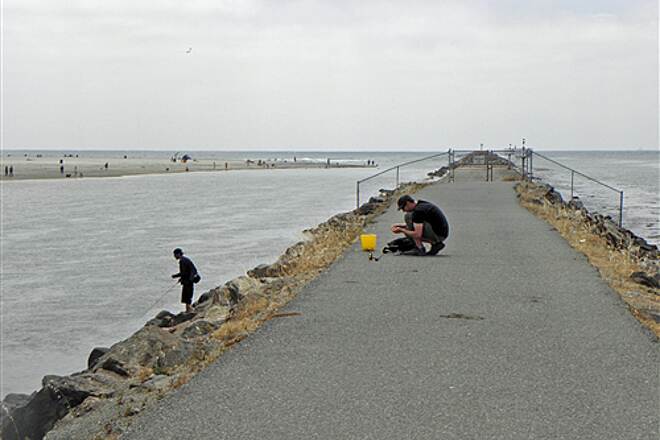 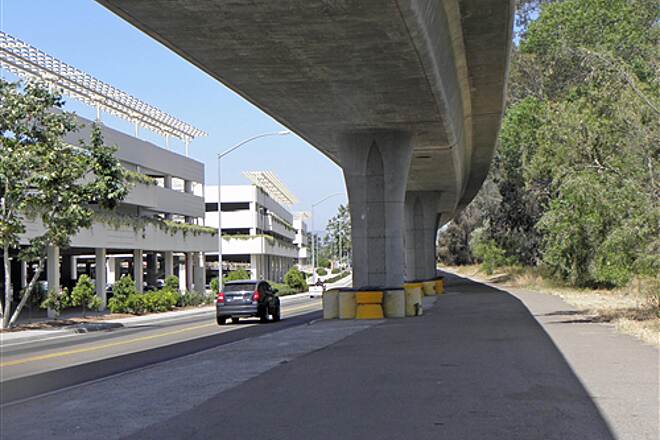 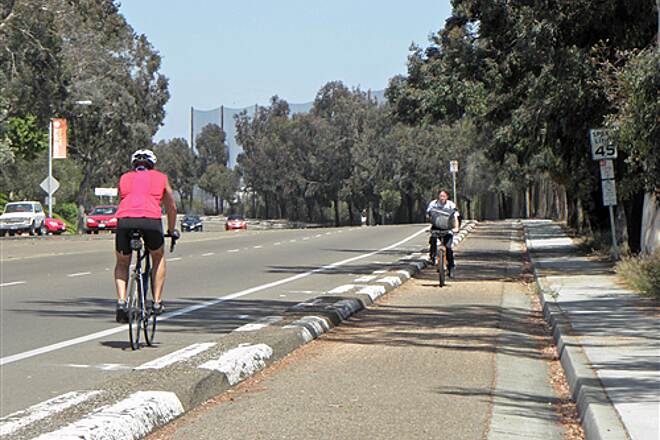 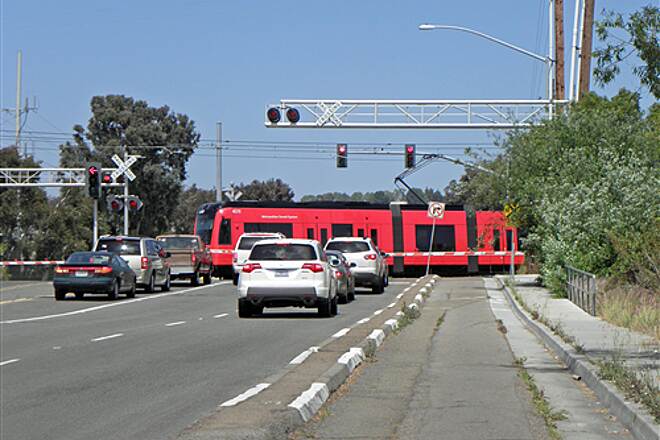 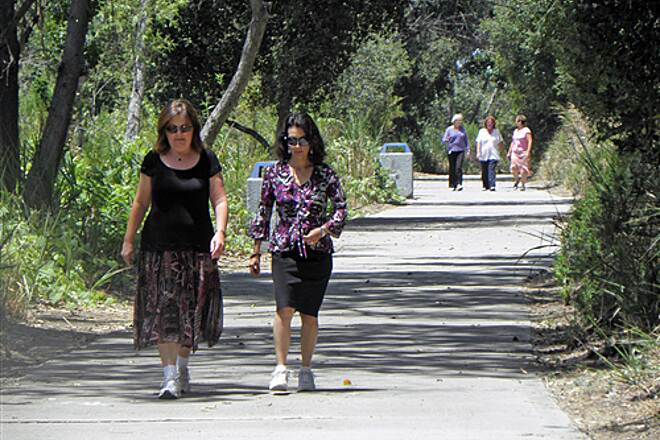 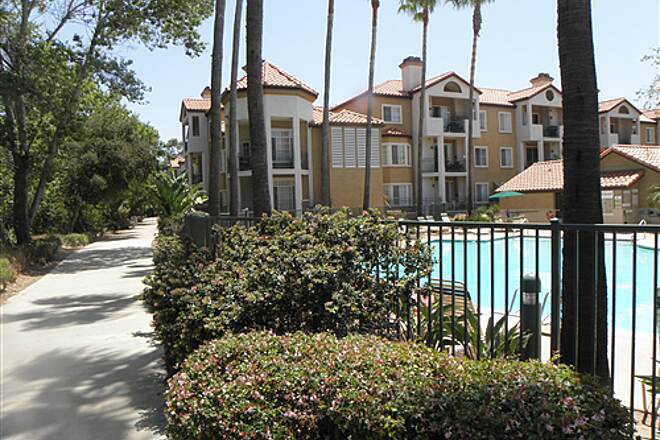 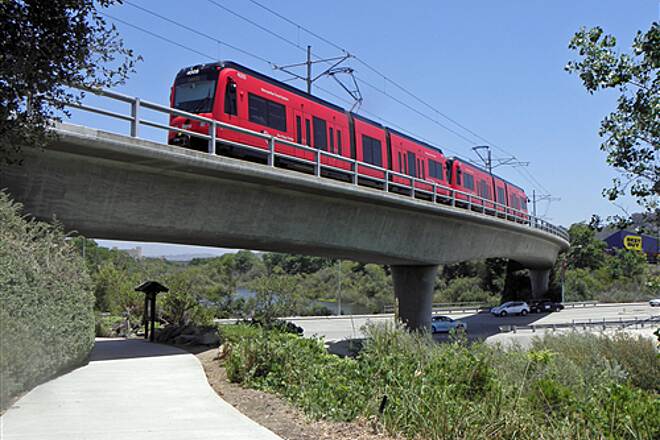 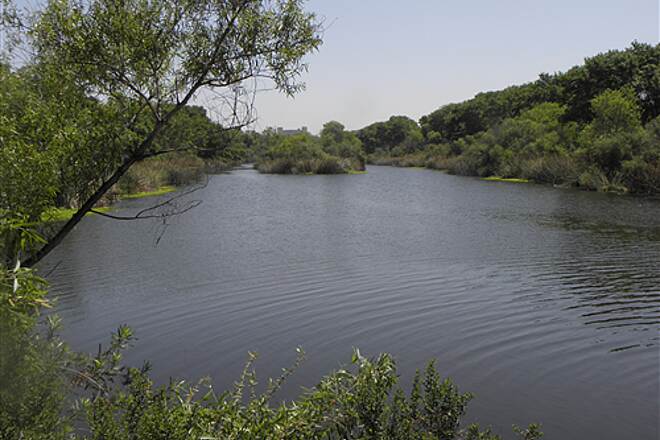 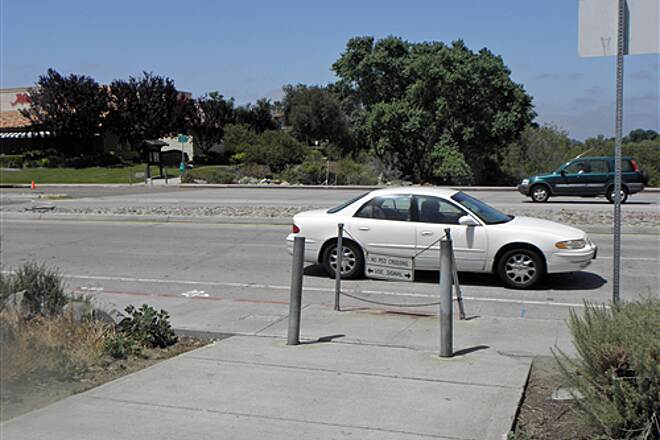 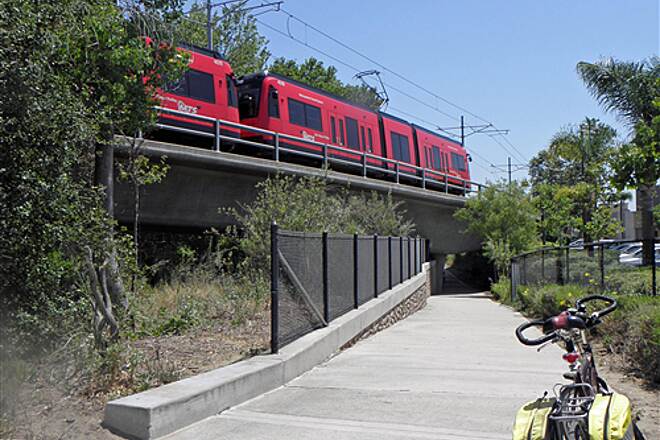 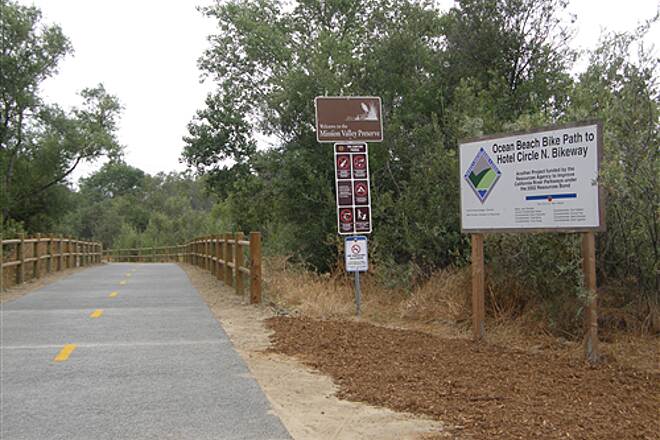 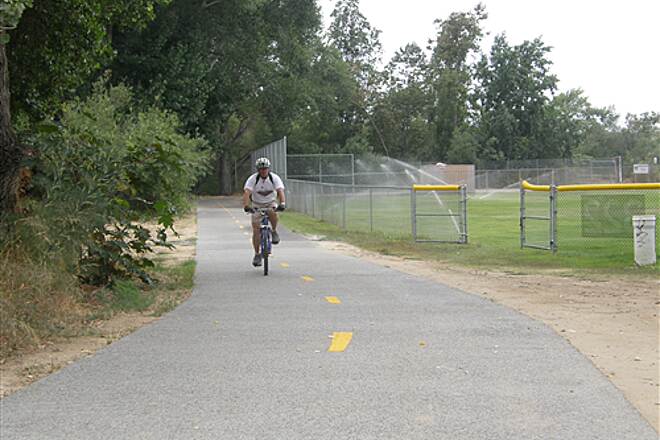 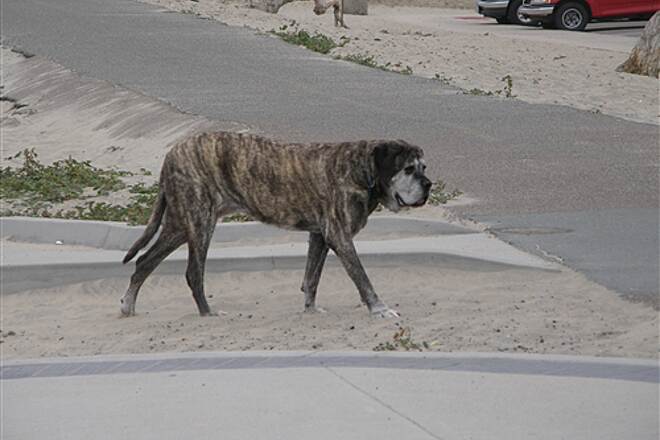 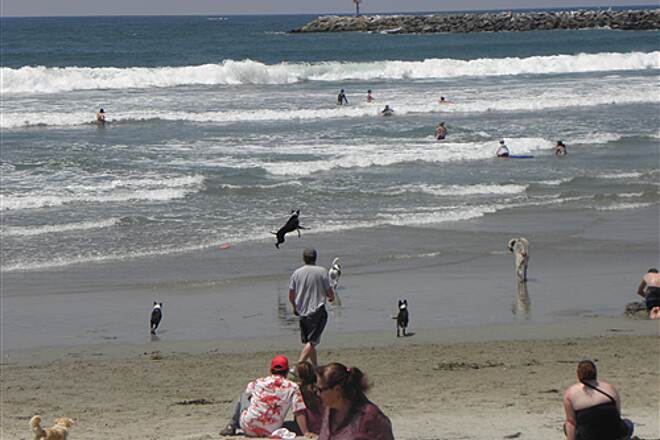 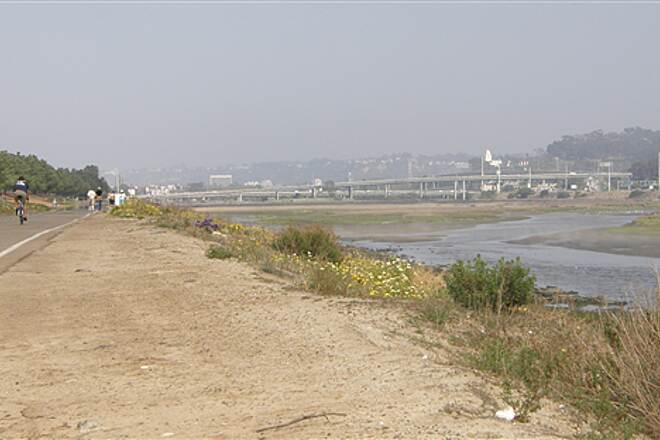 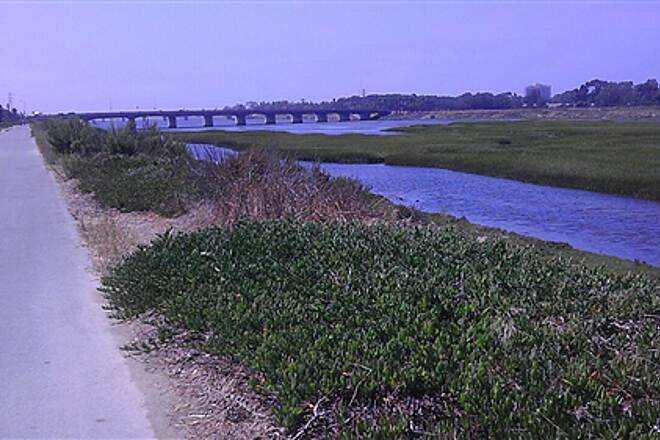 The San Diego River Trail is a network of paths that lead along the San Diego River channel and mud flats and provide access to Mission/Fashion Valley shopping areas. You can walk or ride on either side of the river via the Sunset Cliffs bridge, or the bridge closer to the Qualcomm Stadium.

The trail is excellent for wildlife viewing; bird watchers from all over the county come to snap pictures, and get good sightings and light for an array of wildlife. Fish are always jumping, eagles and hawks are often flying with live catches in their talons or beaks, and the tides make sure the visit is never the same twice.

The Trail is part of a vision of a 55-mile long corridor of trails and paths following the San Diego River. While gaps remain, several sections are already completed. For fun or exercise, this path links to well more than 20 miles of paths around the beaches and bay, which keeps you almost completely on a path and off traffic-clogged streets.

On the east end, park at the ball fields at the end of Hotel Circle Place. On the coast, park Ocean Beach Dog Beach parking area (end of West Point Loma Blvd.) and at Ocean Beach Athletic Area (Bacon St.)

Dirty and be careful

If you're with a group of guys you should be 'ok'. SD River Trail homeless encampments has grown and grown and that means ton of trash and possible not so good encounters.

The trail is all you get. Overgrown bushes block the scene of the river. Lots of trash. Sectioned off by the city roads.

The trail is all you get. Overgrown bushes block the scene of the river. Lots of trash. Sectioned off by the city roads.

Parked on hotel circle place, plenty of room. The trail is a little gravely until past the ball fields, afterwards it’s good quality until you get closer to the dog beach. The asphalt is a little broken up and bumpy, plus there are many folks walking their dogs and some of them don’t know how to share the bike path. All in all, a good ride.

I walk from OB east to where the trail meets Int 5, and back at least twice (total appx. 5 miles round trip) starting at 4:00 a.m. Takes me about 2 1/2 hours. The trail is pretty much deserted at this early hour, for me at age 66 its a great start to the day. I love this wonderful trail!

Just did the ride yesterday and tracked the length. We left from dog beach in OB to Qualcomm Road and it was 7.1 miles one way. It was longer on the way back but that was because we took a side trip to Starbucks ¿¿. Good ride, but a bit rough in spots.

I clocked this at 5 miles round trip. It's a nice little paved path. For visitors like me, map yourself to the Double Tree Mission Valley. Park where the street dead ends and jump on the trail right there under the bridge and next to the train.

Love this trail for biking and have ridden it several times. Both sides of the water are great for cycling and it's definitely more than 6 miles. Not sure where they came up with that!

I'm not sure why someone said this wasn't suitable for bikes. It's perfect for cycling and I've ridden it several times and really enjoyed it, on both sides of the water!

not suited for bikes

Very beautiful trail and scenery but better for walking/running. East of 163 is uneven concrete sidewalks and they are very bumpy and filled with walkers. There is a two-way path that you pickup east of fashion valley but this is also bumpy, and hard to believe it is supposed to be two way. I flipped to the road on both my out and back and was happier.

The trail system west of Route 163 in Mission Valley is best suited for cycling. Much of it is on or right next to roads and covers longer distances than most people want to walk. There is a nice cycling path on the south side of the river running from the west end of Hotel Circle Place out to Dog Beach next to Ocean Beach. On the north side of the river, a good portion is on Old Sea World Drive right next to the current, wider Sea World Drive. Going east from there, you're on or next to Friars Road until you turn right onto Fashion Valley Road which has no path or bike lane. Turn left as you go under the trolley line where you go on a separate but sometimes bumpy path along under the trolley line past Fashion Valley Shopping Center. You can cross the river on Avenida Del Rio and use the path next to Camino De La Reina to go under Route 163.

On the east of Route 163 the path goes up a ramp to a concrete walkway that is more scenic than the western section of the trail, but is more suited to walkers than cyclists. The concrete tends to be uneven and rough for bikes and crossing Mission Center Road and Camino Del Este legally requires going on the sidewalk half a block to a traffic light, then back to the trail on the other side of the road.

This trail could almost qualify for a rail-with-trail designation. The Mission Valley Line (Green Line) of the San Diego Trolley runs along the San Diego River as does the trail. The trolley crosses the trail several times and the sleek new red trolley trains are beautiful if you like such things (see the photos). There are several trolley stations near the trail and if you want to ride the trolley with a bike, here is the official word from the trolley web site: "On the Trolley, one bike is allowed on board during rush hours and two bikes are allowed on board at other times. Board your bike through the last door of the car. If the maximum number of bikes is already on board, go to another car or wait for the next Trolley. Stand with your bike during the entire trip." Of course you need to purchase a ticket before boarding.