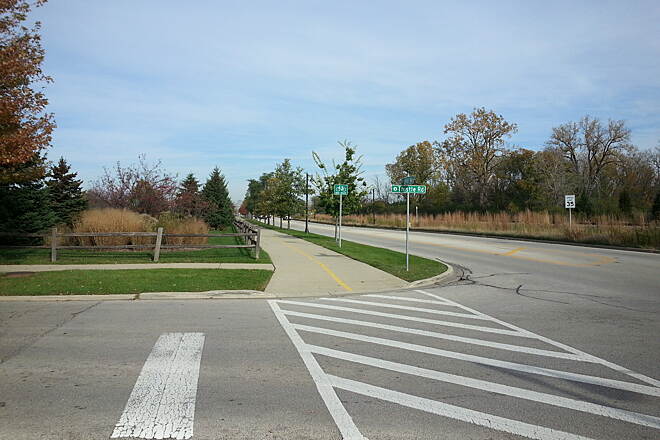 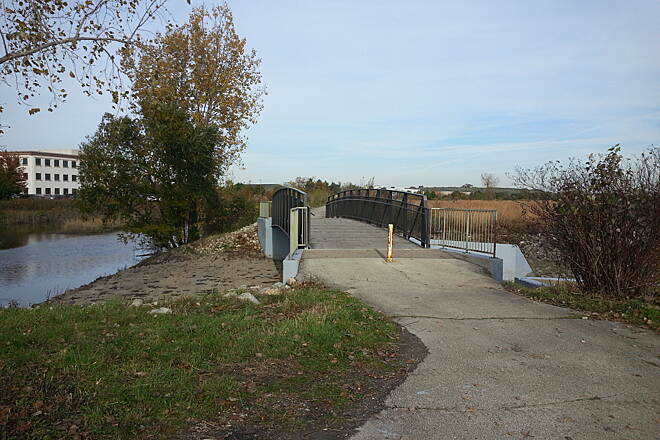 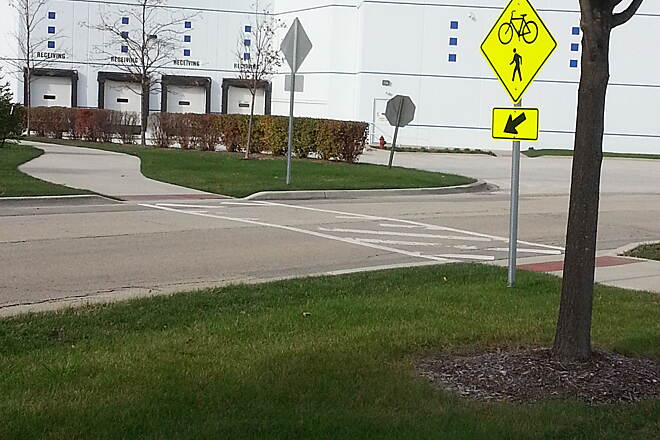 While the Techny Trail's looping northern end offers the most scenery, the southern end along Johns Drive, Lehigh Avenue and the active Metra railroad tracks provides direct access to Glenview's popular downtown area. Start or end your trail journey with a bite to eat at one of the area's many delicious restaurants.

Interesting, but a bit confusing. This is a mix of a 'real' trail around the Techny conservation area (big depression) and sidewalks converted for bike use (or so it appeared). It goes through an industrial park where the path is not very clear, then along city streets later. The part around the conservation area is quiet and pretty; the lower stretch along Lehigh Avenue is clear to follow with not much traffic (mid-day; mid-week). Positive is that there is only one major road crossing and it has buttons to request a walk signal. I liked it enough to ride it again, but would not say it is the best in the area. It is not a long ride, so the really serious might want to use other paths.

The North Branch Trail follows the North Branch of the Chicago River over 20 miles through Cook County. The trail was originally a dirt path often...

The Skokie Valley Trail in Cook County parallels active train tracks in the Village of Skokie, providing easy access to both the Oakton–Skokie and...

The East Northbrook Trail is a 1-mile route through a wooded corridor adjacent to an out-of-service rail corridor in the Village of Northbrook. The...

Prospect Heights has very few sidewalks, so biking, inline skating or walking are moved to the streets or in the parks. Don't underestimate the...

An excellent example of land use in greater Chicago, the entire Skokie Valley Trail corridor is a rail-with-trail, paralleled by double tracks that...

The Robert McClory Bike Path runs the length of Lake County, knitting together a string of communities on the north shore of Chicago all the way to...

Although the Phyllis Harmon Path is short, it's an important connector in an east-west bike/ped route between Arlington Heights and Glencoe. Following...

The Union Pacific Recreation Path offers a short route through the Village of Lincolnwood's east side between Devon and Touhy avenues. Following the...

Support The Trails You Love & Get Our Rails to Trails Magazine!

Get Outdoors and Experience Trails With Our New Guidebooks!