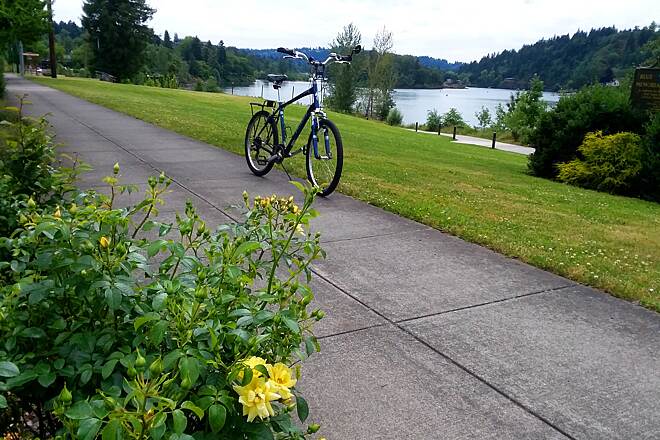 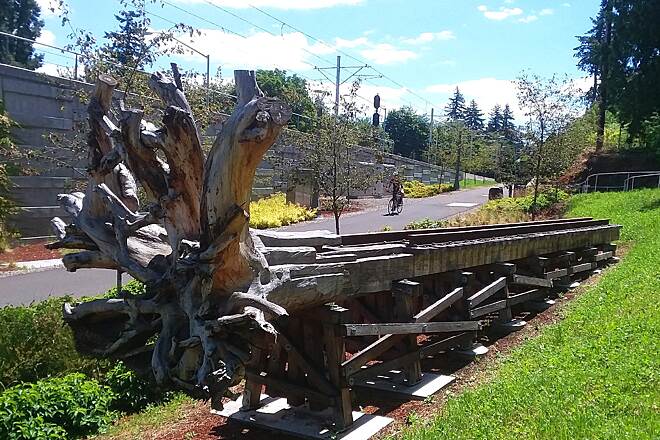 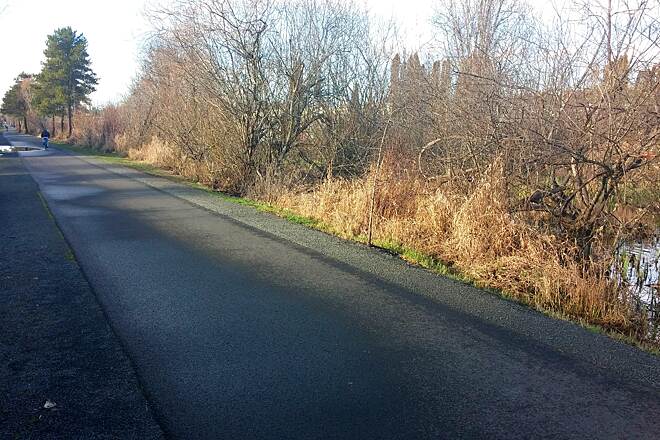 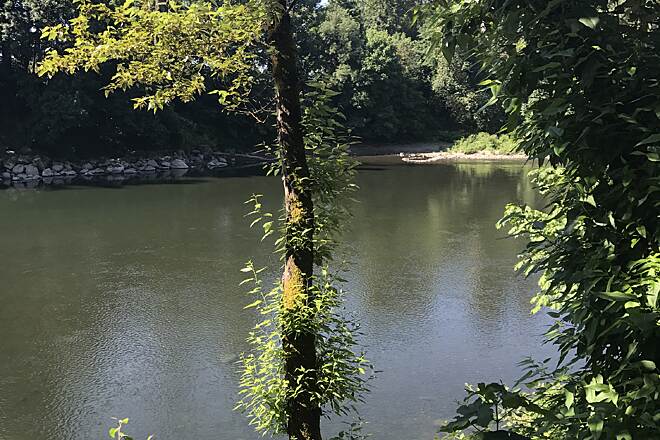 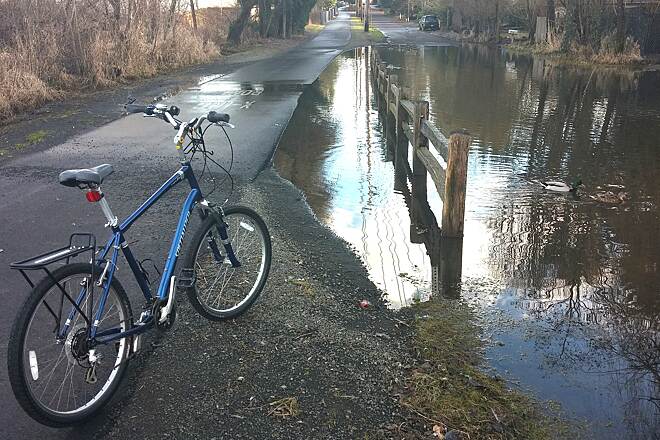 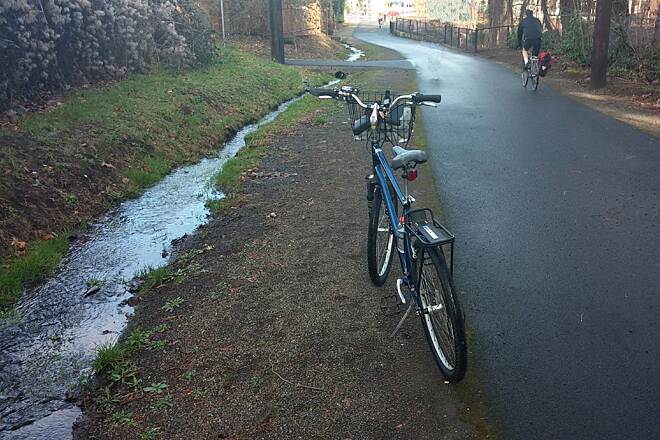 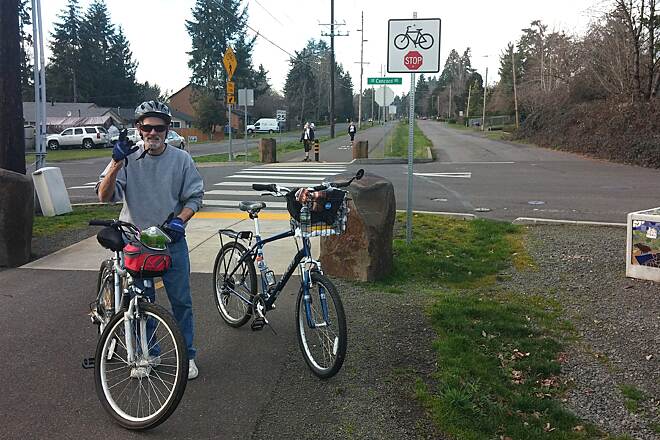 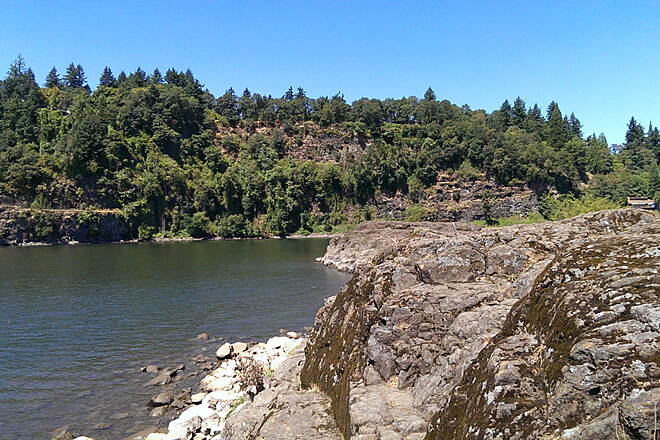 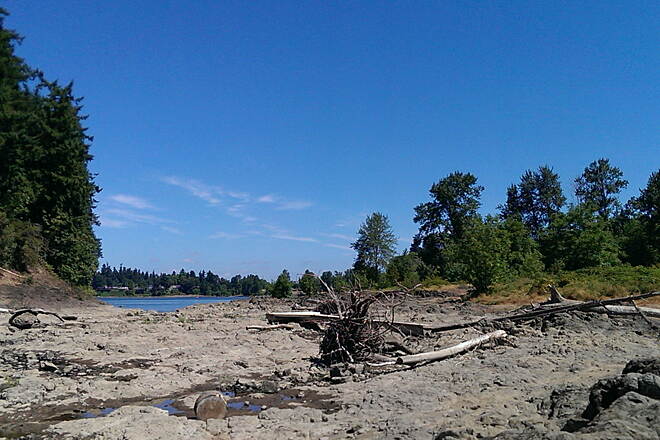 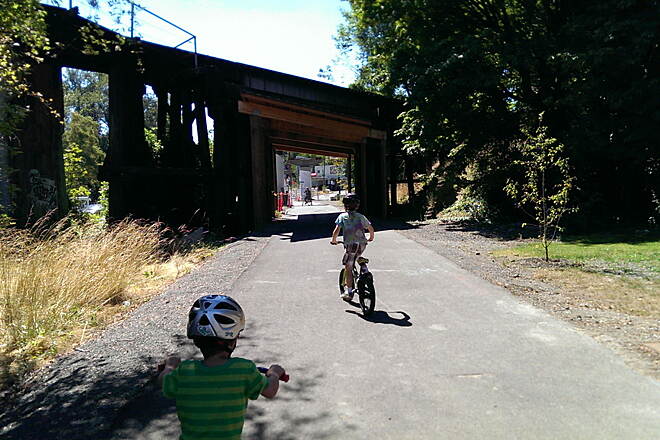 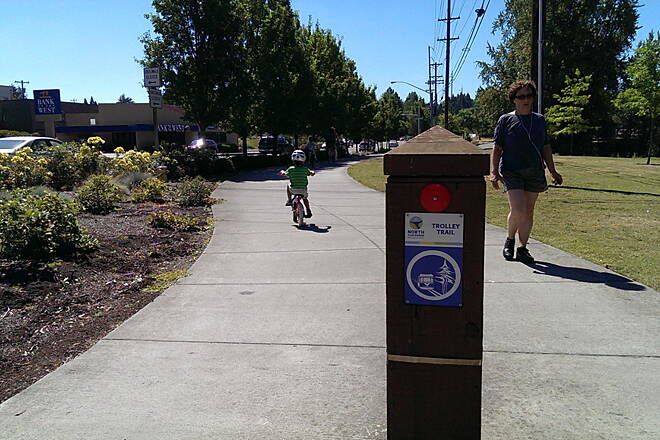 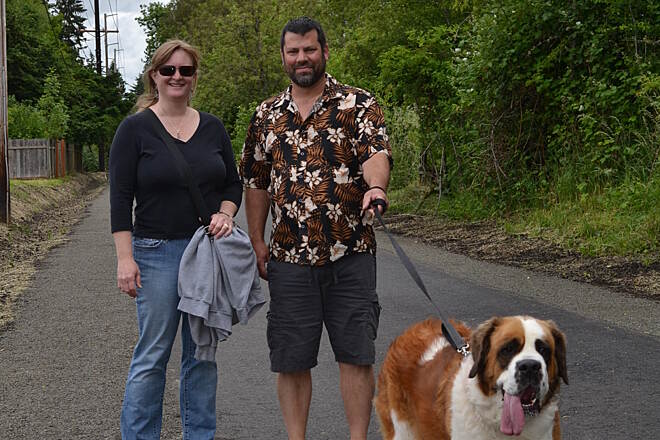 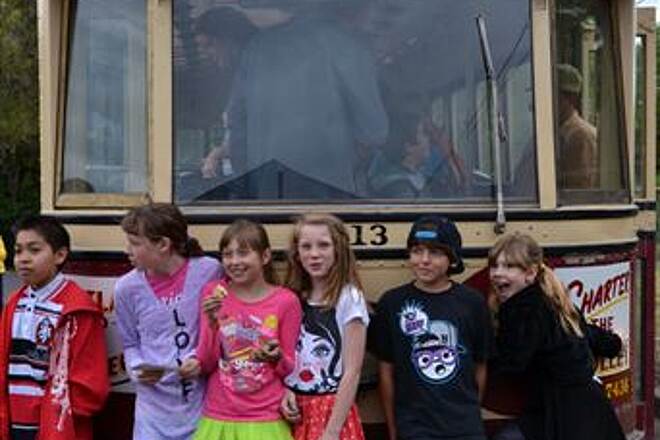 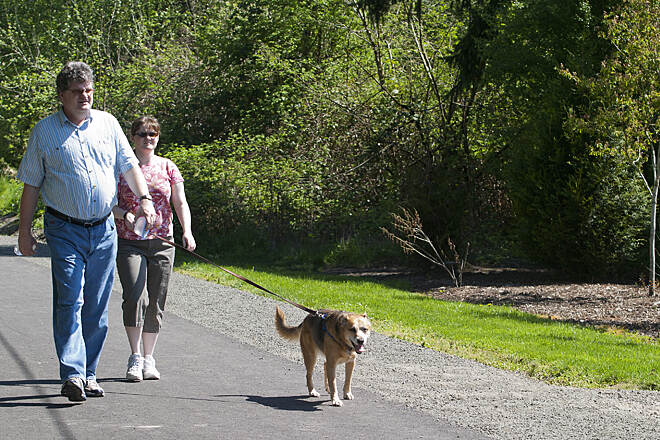 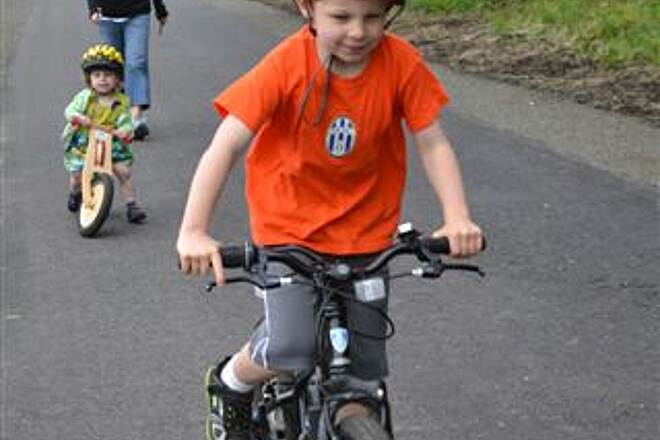 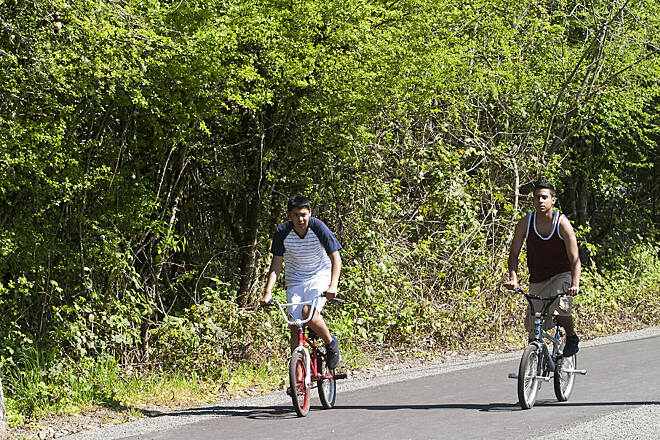 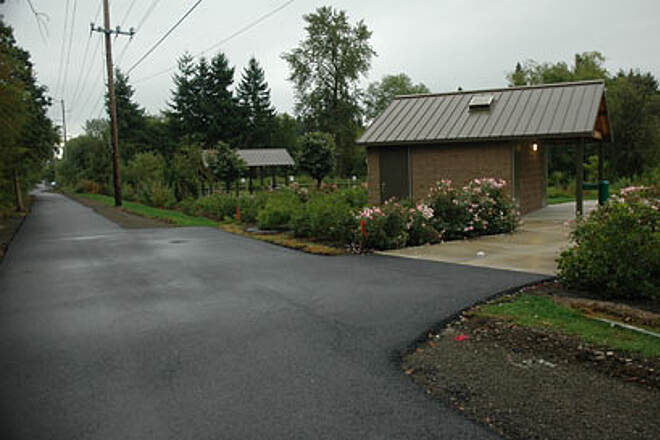 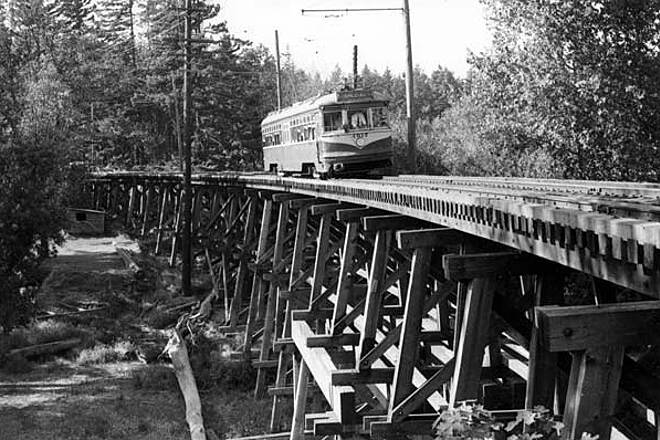 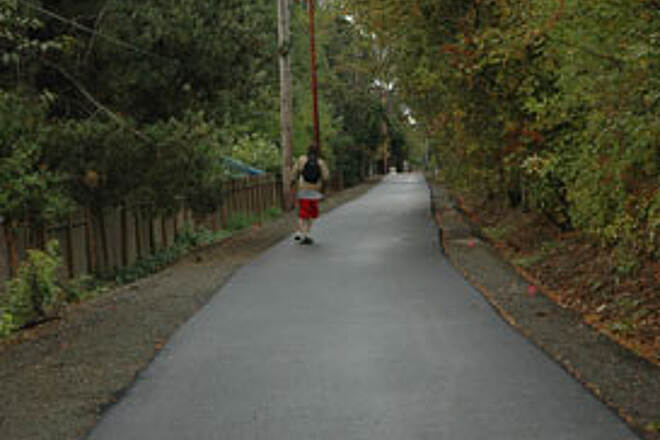 Currently, 6 miles of the trail are complete. The trail is part of a planned 20-mile loop that will connect Portland, Milwaukie, Gladstone, Oregon City, and Gresham—linking schools, parks, commercial districts, and historical sites along the way. Metro and the North Clackamas Parks & Recreation District (NCPRD) purchased the right-of-way in December 2001. Developed in 2012, the trail completes a missing link in Metro's regional trail system. It presently reaches bike lanes in Milwaukie and Gladstone and will eventually link to both the Springwater Corridor and the I-205 Multi-Use Path.

Milwaukie Riverfront Park on the Willamette River provides a great starting point. Summer Sundays bring the farmers' market just across the street. As you make your way along the trail, wide corridors of trees and grass buffer you from city streets; you may encounter a host of wildlife, including opossums, beavers, great blue herons, green herons, and Western screech-owls.

On either side of the length of the trail, you'll find historic homes claiming many styles of architecture, including Arts & Crafts, Craftsman, Queen Anne, Colonial Revival, and more. Just past Courtney Road to your left, the Elizabeth Heitkamper House, completed in 1888, is the largest and most prominent example of Queen Anne–Vernacular style in north Clackamas County.

The trail passes through the playgrounds and nature areas of Stringfield Park, eventually ending at East Jersey Street in Gladstone. After this point, you'll find intermittent bike lanes and sidewalks.

In the next couple of years, the trail will extend 1 mile north along SE 17th Avenue to reach the Springwater Corridor. Currently, this section of street riding is used by seasoned commuters and is not recommended for families or trail riders.

nice for an afternoon ride

Enjoyed going down this path on a sunny afternoon. A good mix of slight down & uphill so it never feels like too much work to just keep going. When the path crosses the main streets sometimes it can be difficult to spot where it continues vs where there’s just a large (rocky & car filled) bike lane. Once you’re back on trolley trail though it’s super easy and pleasant. Lots of folks with their dogs out when I went on a Friday afternoon.

My husband and I just discovered this trail today. What a gem! Love the random artwork and the peaceful trail!

The description of this beautiful trail needs to be updated. You can now ride from Oregon City or Gladstone all the way to downtown Portland and out to Boring. ALL ON TRAIL! (There are just a few short rides on quiet neighborhood streets to connect the segments.) The Trolley Trail has been extended to connect with the Springwater Trail (which connects to the Eastbank Esplanade and I-205 trail) so the trail network stretches from Gladstone to downtown to Gresham/Boring to Marine Drive.
Trail access:
Gladstone - Stringfield Family Park on Naef Rd. is a great starting point, especially for families. This avoids having to cross McLoughlin Blvd.
Oregon City - Starting at Funkity Park at the end of Hwy. 213 takes you across the Clackamas River, through a bit of Gladstone and to the Trolley Trail start. Crossing McLoughlin is necessary but no big deal.
Milwaukie Riverfront Park is also a good access point - go south to Gladstone or north to connect to the Springwater.

I would really love for reviewers who have posted the photos of the lovely, shaded, and tree lined lanes to add a location to the photos. We went to the trailhead supposedly at the Milwaukie River Front Park. We didn't understand where the trail was. There was a bike path that started from the very small portion of the lot that allowed car parking. It was titled Kellogg trail and only went for a little bit along the river before heading into the neighborhood.

We headed back to the parking lot where we ran into another family also confused as to where the trail was. It wasn't until we had loaded up the bikes in frustration and were driving out of the parking lot that we saw a very small post and sign on what, for all intents and purposes, looked like the sidewalk when you were standing in the parking lot. It was actually the trail and went right alongside McGloughlin Blvd, just like a sidewalk, not a nicely shaded bike bath that is shown in the photos. We followed it in out car for a bit before turning around.

If you have posted one of these lovely photos or are familiar with this trail, please, where is the nice trial from the photographs? Riding alongside McGloughlin Blvd on a sidewalk was not the nice bike outing we had been looking for, but even then, we didn't even find it until we were frustrated and leaving. Signs would be nice.

One of the best!

I have taken many friends and guests on the Trolley Trail to Oregon City. The local government (Metro) has recently published a map that takes the best route all the way to Oregon City. The route officially begins in downtown Milwaukie at the beautifully remodeled riverfront park (which now includes a beach where people can swim in the summer). The route then goes South following the new Orange Light rail line to Park Ave. where the trail proceeds through a quiet, historic residential neighborhood. The path passes the Stringfield family Park with functioning public restrooms and drinking fountains . The grade is mellow, with gentle uphill's followed by pleasant downhill's where one can coast. The path ends officially at McLoughlin Blvd. right at Gladstone. Crossing the highway and following the route of the trolley down Abernethy Lane then right onto Portland Avenue in Gladstone to the glorious Clackamas river. Follow the riverside parks upstream to the pedestrian bridge, over the famous "high rocks swimming hole" back down the pedestrian bike path along the Clackamas to the Willamette, then through Clackamette Park on the bike path to Oregon City and the stunning Willamette Falls. The whole route is enjoyable. Oregon City is an excellent destination featuring the Willamette Falls and the unusual staffed elevator that goes to the ledge above (bikes allowed). I recommend the outdoor seating right above the Falls at the Highland Stillhouse Pub. The ride from Sellwood (neighborhood in Portland in far South quadrant of city) to Oregon City is about 10 miles a perfect day ride. This ride is 85% on dedicated bike/pedestrian paths and is one of my favorites.

Trolley Trail is not ideal for small children but Elk Rock rules.

We started at SE Jefferson today with our two boys (3yrs and 6 yrs). There's a fair amount of traffic and construction along the south portion of the path. It's confusing where to head on the path and not ideal for younger children.

However, just past Washington St. there's a paved trail behind the Kellogg Creek Wastewater Treatment Plant. Head down on SE 19th Ave to end of the street and there's a small park for children to play. Follow the dirt path off to the right down to Elk Rock Island Park, which is amazing and serene. There's plenty of good light hiking and a view of the Willamette in this area.