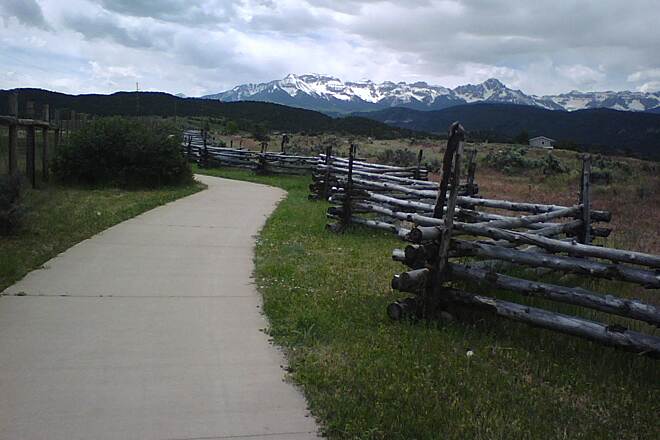 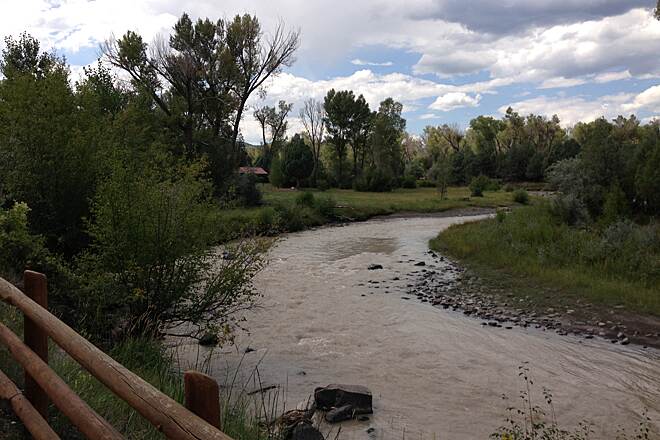 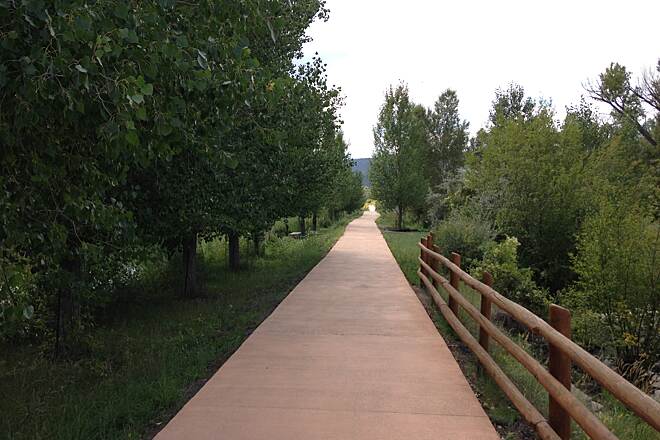 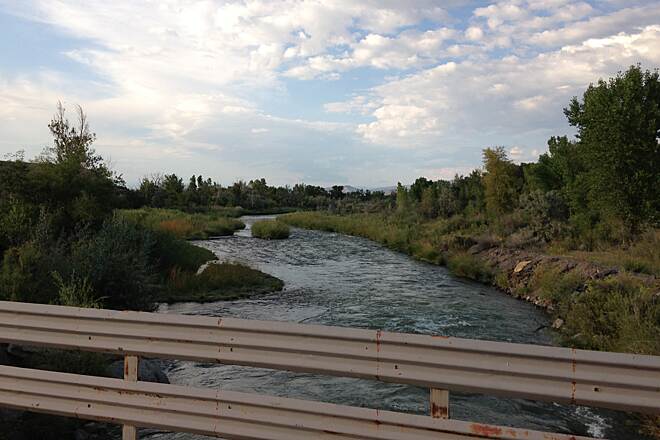 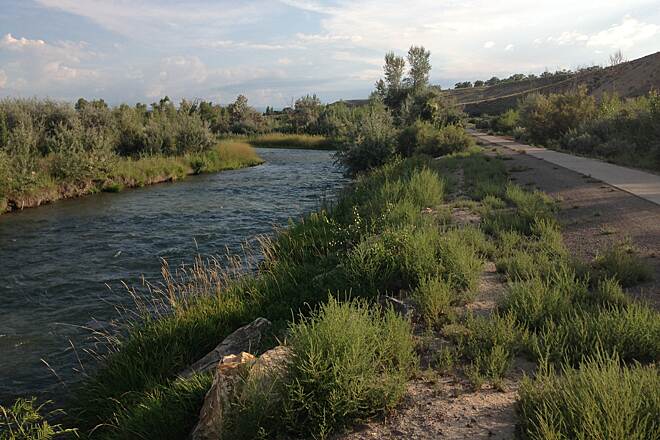 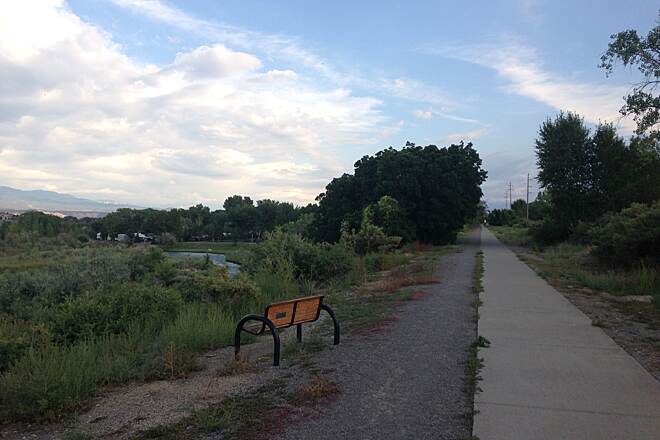 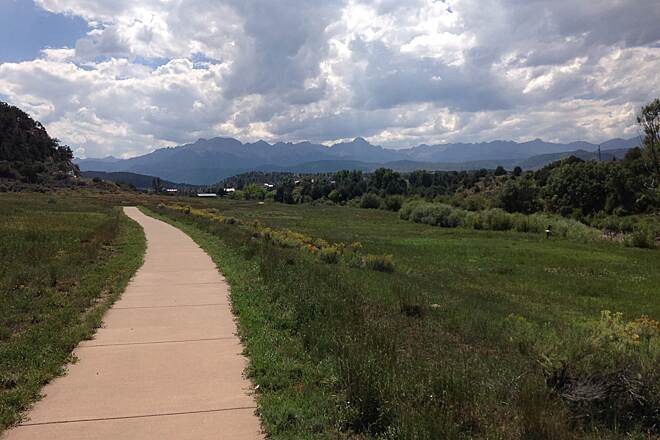 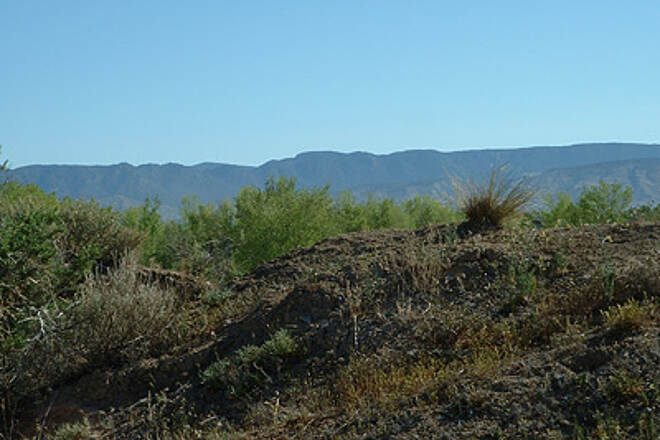 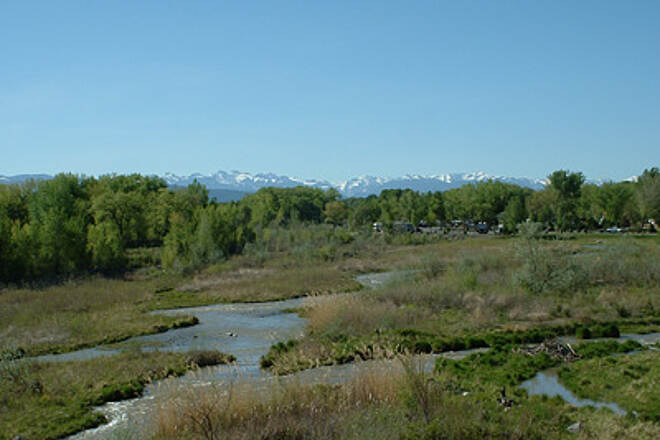 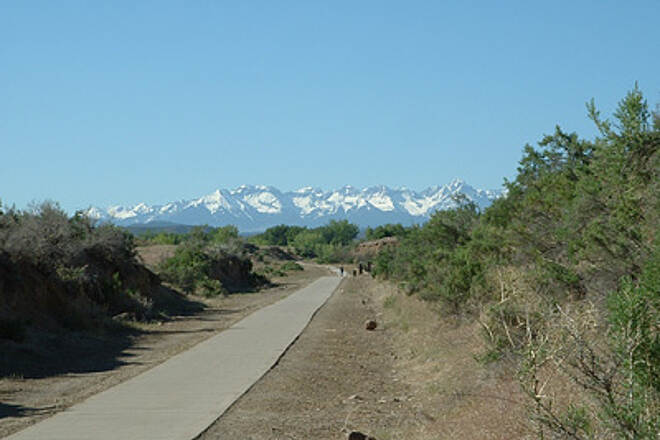 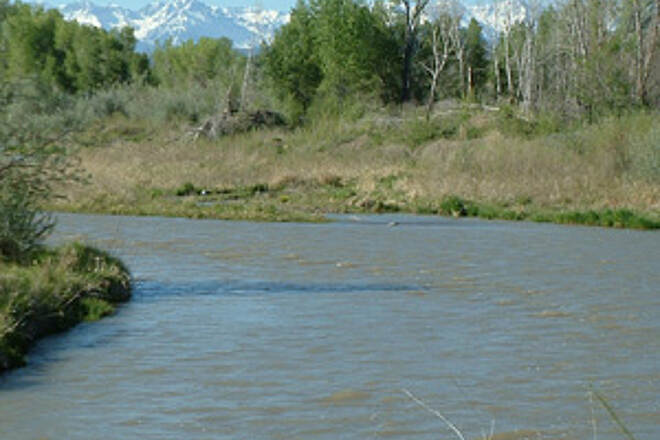 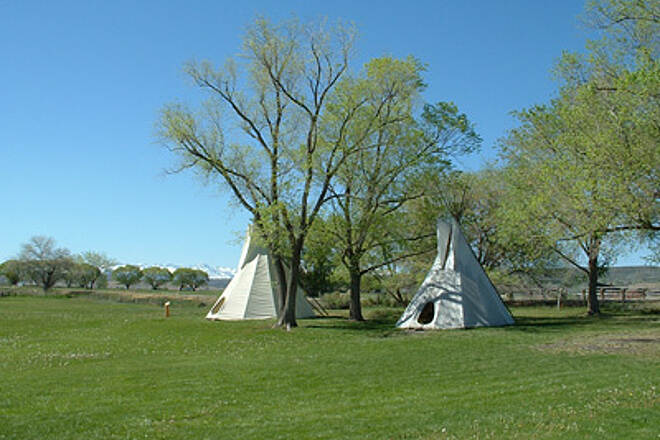 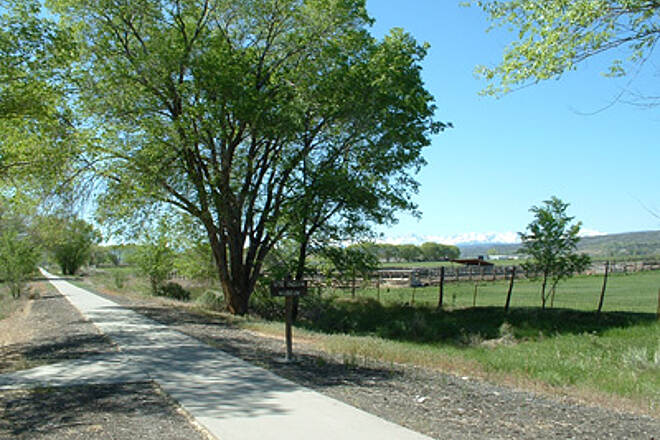 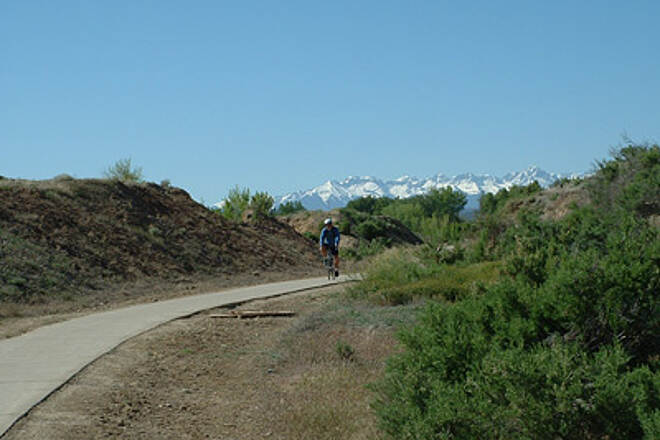 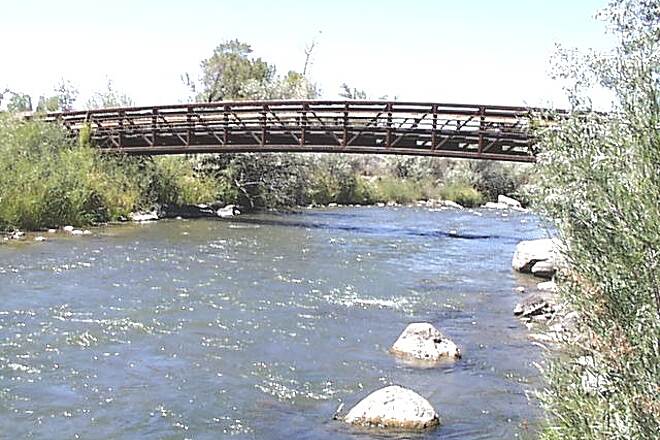 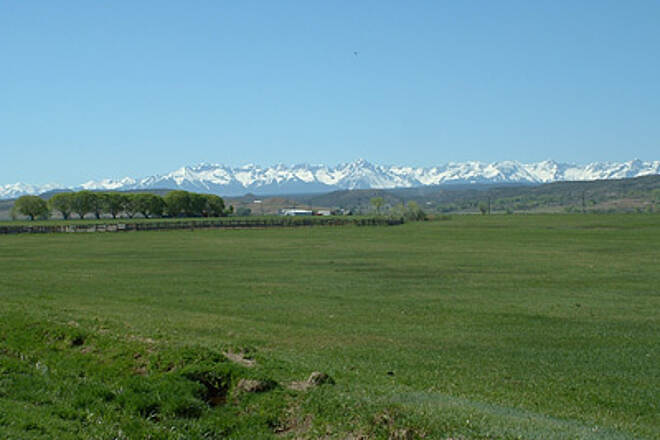 The Uncompahgre RiverWay Trail will eventually link Delta with Ouray, a 65-mile route along the Uncompahgre River in southwestern Colorado. Currently, two major segments have been completed in the communities of Montrose and Ridgway. Portions of the planned trail, including long stretches of the completed sections, use a former Denver & Rio Grande Western Railroad line.

The northern section of the trail starts at Montrose's West Main Trailhead, just beyond the W. Main Street (State Route 90) bridge over the Uncompahgre River. The path heads south, crossing the river twice as it runs through Cerise Park, Baldridge Park and Ute Park. At S. Rio Grande Avenue, the trail joins the former rail corridor, just behind the Russell Stover chocolate factory.

The trail remains on-corridor for the rest of its route into the southern reaches of Montrose. After again crossing the river and paralleling it for about a mile—where an occasional eagle may be seen fishing—the trail leaves the riverbank to traverse the fields and ranchland of the Uncompahgre River valley. Eventually, the trail passes behind the Ute Indian Museum, worth a trip with its extensive collection of resources on the local tribe.

The trail surface changes from concrete to gravel shortly thereafter, continuing for another 2.8 miles adjacent to US 550's unpaved frontage road before ending abruptly at Trout Road. This part of the route provides spectacular vistas of the San Juan Mountains to the south, the Uncompahgre Plateau to the west, Grand Mesa to the north, and the Cimarron Ridge and rim of the Black Canyon of the Gunnison to the east.

Although the trail is not complete south of Trout Road, the gravel frontage road continues to the tiny community of Colona, a distance of about 5 miles. The frontage road is suitable and safe for running, walking or mountain biking.

The Ridgway portion of the Uncompahgre RiverWay Trail begins in the north at Ridgway State Park's Dallas Creek area, but most users begin their trek downtown and travel north. The trail, which is paved throughout Ridgway, runs primarily on the same former Denver & Rio Grande Western Railroad corridor as Montrose's segment and features a restored railroad trestle just north of town.

The trail links several of the town's amenities, including its Regional Athletic Park, Hartwell Park and Dennis Weaver Memorial Park. The latter offers 60 acres of permanent wildlife preserve, as well as a picnic area along the river and mountain biking and hiking trails.

North of the park, the route is open sagebrush with a stunning mountain backdrop, although US 550 is never far away. At the segment's northern end, Ridgway State Park's Dallas Creek area—located at the southern end of the Ridgway Reservoir—offers picnic areas and prime fishing spots. Two large campgrounds can be found just north of Dallas Creek for those planning a full outdoor adventure.

Please note that there are no signs specifically identifying the trail as the Uncompahgre RiverWay Trail. Look for the standard "bike route" signs present at all trail crossings.

In Montrose, parking is available at the West Main Trailhead on W. Main Street (SR 90). Additional parking can be found in Cerise Park on Shanes Way, Baldridge Park on Apollo Road and Ute Park off S. Rio Grande Avenue. Restrooms are also available in Baldridge Park.

Farther south, a small parking lot can be found where the trail crosses Chipeta Drive. For paying visitors, parking and restrooms are also available at the Ute Indian Museum, located even farther south along Chipeta Drive.

In Ridgway, park at Hartwell Park on Sherman Street (SR 62) or Ridgway Regional Athletic Park on County Road 23. There are also several large parking lots in Ridgway State Park's Dallas Creek area; access them via US 550 just north of town.

I rode the northern section of about 7-8 miles. The surface is concrete in good condition. It goes through several parks and crosses a couple secondary roads, so it was sometimes confusing. It follows the Uncompahgre River closely part of the way. When connected to the southern section this will be a great route.

Rode both the south (Ridgway) and north (Montrose) ends of trail. Liked both ends. South end is longer with extension into Ridgway SP (no fee for bikers). Section is state park is mostly paved with a couple sections of single track. The north end of single track is a bit more challenging with steep hill and cliff side exposure. The north end of trail is paved through the river bottom area with lots of trees and park area. Will be great once the two portions are connected. South end has a nice short side trip to Dennis Weaver Memorial Park.

I read about this trail and wanted to check it out on my drive between Durango and Telluride. I am from out of state and not familiar with this area. I started in Ridgeway and headed out to the state park. I asked a gentleman at the visitor center right in town about the trail beyond end of pavement because I had both road and mountain bike with me, and he informed the trail continues beyond end of pavement, so I took mountain bike. Overall it was a warm July afternoon ride, and dry. The scenery is ordinary with not much foliage or greenery The trail at the end of pavement is a fun single track and it is cooler there due to body of water. Being alone I did not go too far and recommend avoid solo travel as the area was quite deserted, even though a state park.

If yo park at the trail head on W.Main St in town and start there. The entire trail is concrete path. Follow the path, it does fork left and right just a few hundred yards into the trail, it doesn't matter which way you go it meets up in the same place. The trail follows the Uncompahgre River, stay left and cross the bridge over the river into Baldridge park.

Meander through the park keeping right after the bridge. Follow the path to Rio Grand Rd cross Rio Grande stay on the path, the cross the road again. The trail then goes fairly straight and flat for the next 3 miles following the river for 1.5 miles.

Cross Chipeta Rd you will end up behind the Ute Indian Muesem. By now you have gone close to 4 miles since the start. The concrete trail goes about another mile and then ends, this is where I turn around and head back. On the way back it is alot easier ride as you are going down in elevation although you wouldn't know it.

The entire round trip is 8.5 miles and is very scenic takes about 50 mins of actual cycling time. Wee worth the ride

Best to Start in the town of Ridgway at the town Park on Railroad St which is right off Hwy 62/Main St Ridgway. The entire trail is concrete paths. The first 1/2 mile is through town, then you cross over Railroad Rd and head along the river passing Dennis Weaver park you cross a cool old railroad bridge. It is flat for a little while then there is a small uphill climb. Once on top you are cycling adjacent to HWY 550 heading north. You then drop down onto about a 100 yard stretch of a residential road. Crossing County Rd 24 follow the trail along the river into Ridgway State Park, follow the path for another 1.5 mile until the path ends. You have now gone 4.3 miles. That took me about 25 minutes.

On the way back you are looking at the San Juan Mountain Range. There is one stretch of about 200 yards that is uphill other than that it is quite an easy ride and very scenic.

Highly recommend, easy ride, 8.5 mile round trip that took me 50 minutes of actual riding. There are public restrooms along the way.