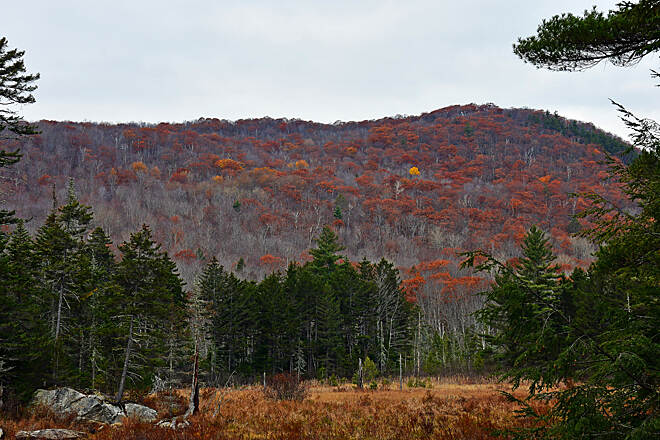 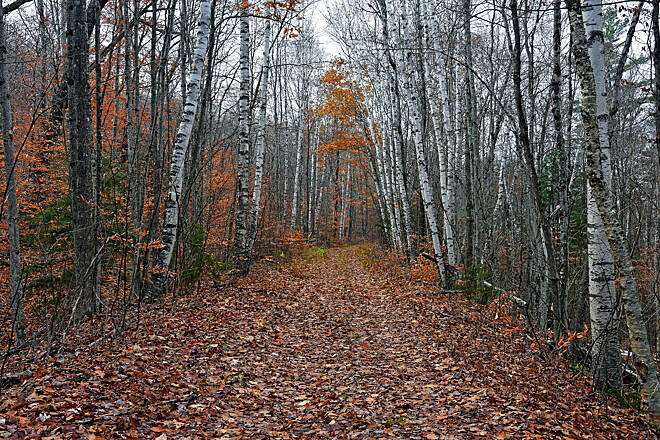 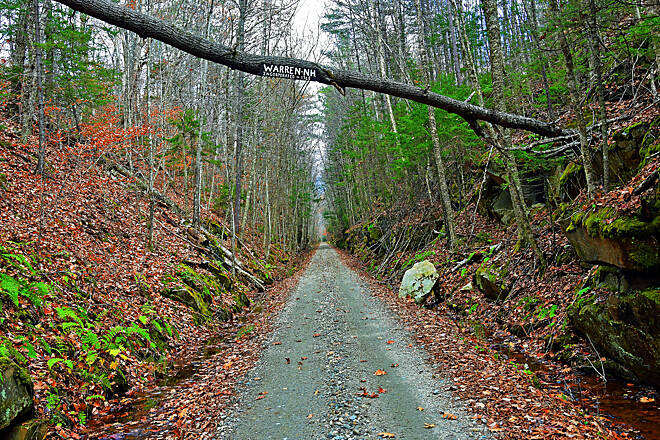 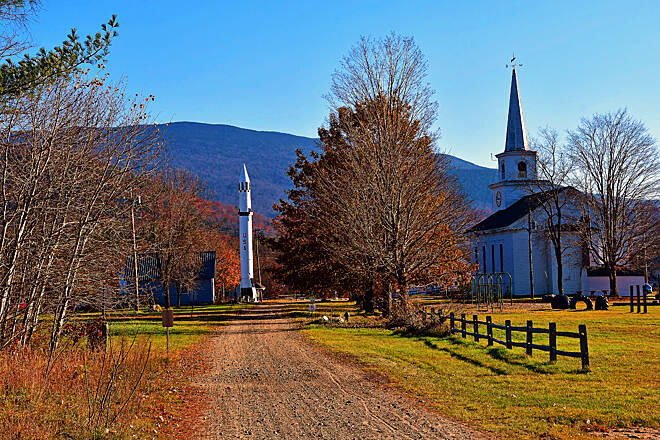 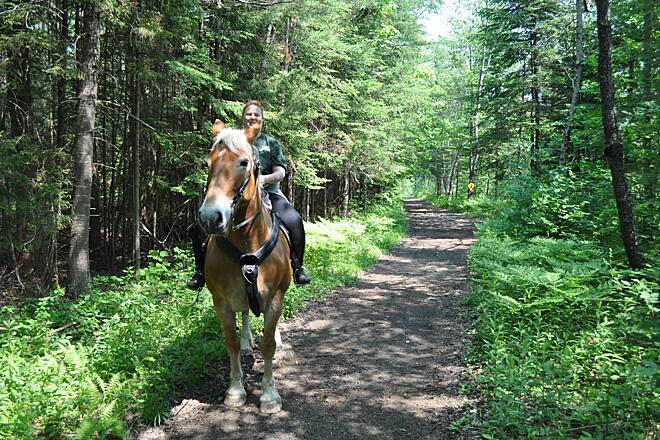 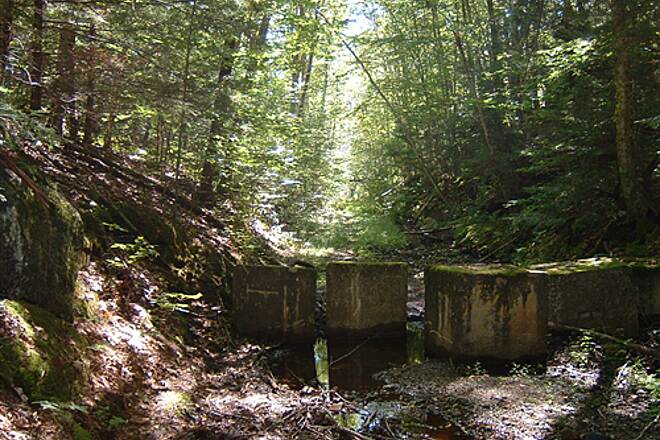 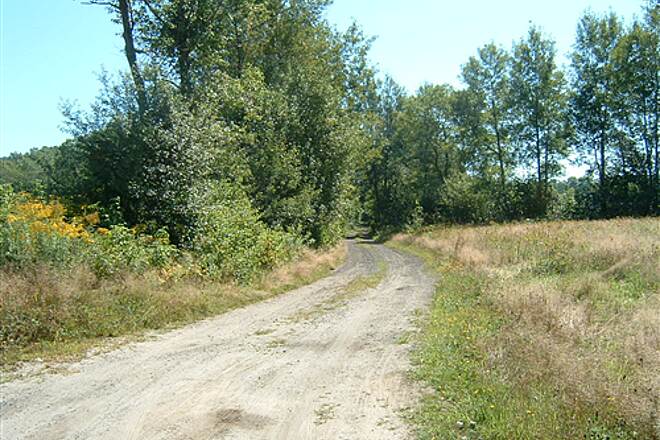 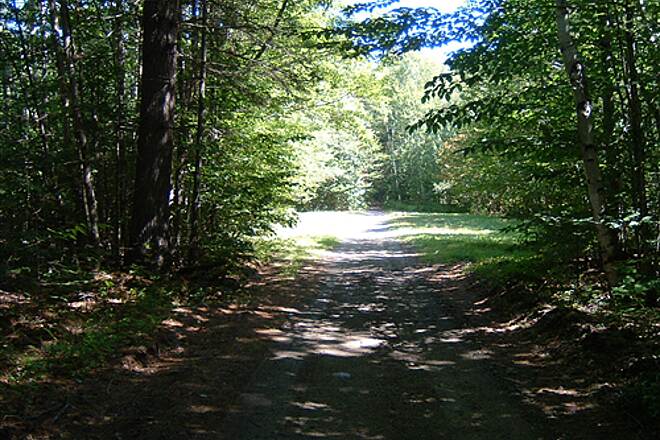 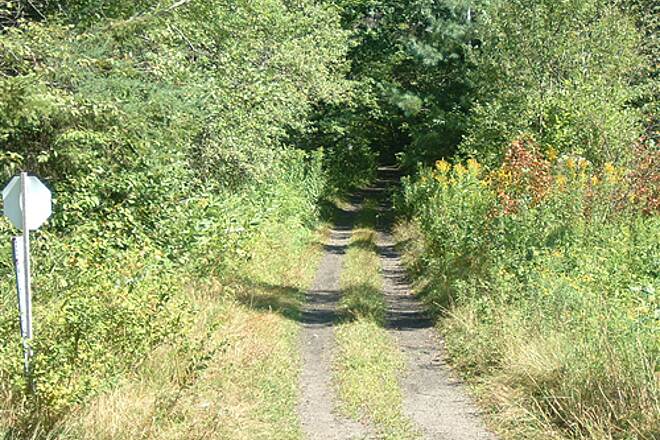 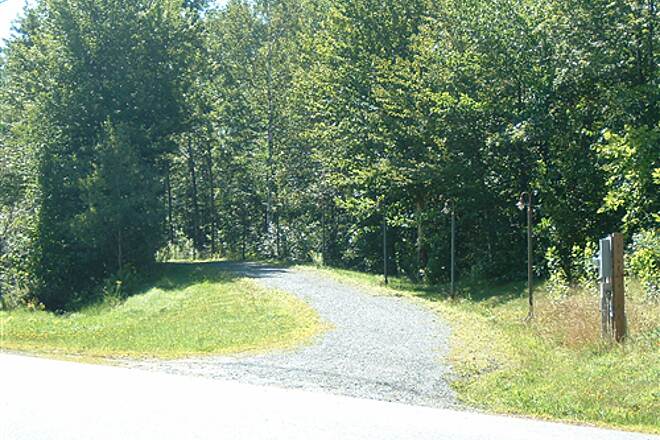 Many rail-trails start at a vintage depot, an old caboose, or a rusty locomotive acquired by the local historical society. The Warren to East Haverhill Railroad Grade Trail, however, starts at the base of a surplus 70-foot Redstone missile delivered in 1971 to inspire local youth about the space program. It’s the same type of missile that launched Derry native Alan Shepard into space in 1961. It’s a good place to blast off down a 10.8-mile dirt trail into the White Mountains.

Warren and Haverhill were two stops on the Boston and Maine Railroad’s White Mountains Division that ran between Concord and Woodsville on the Vermont border. The original charter in 1844 went to the Boston, Concord and Montreal Railroad, which finished the line through New Hampshire by 1853. Mergers eventually put it under the control of the Boston and Maine Railroad in 1895. The line supported the timber and tourism industries until it ceased operations in 1954 as cars and trucks took over.

Formerly the Warren Recreational Trail and also known as the Jesse E. Bushaw Memorial Trail or New Hampshire Snowmobile Corridor No. 5, the rail-trail takes an easy grade uphill from Warren to the westernmost pass through the White Mountains at Glencliff, and then descends to East Haverhill. Off-highway recreational vehicles, including trail bikes, are allowed only as far as Glencliff, but snowmobiles can continue beyond. In addition to snowmobiling and cross--country skiing, snowshoeing and dogsledding are permitted in winter.

The Redstone rocket trailhead is set amid the village school, town hall, a church, and a restaurant (an ice cream parlor is a block away). The trail starts uphill on the railroad grade and soon enters a forest.

About 4.6 miles up the trail, you’ll cross Station Road in Glencliff. Originally called Warren Summit, the town was renamed Glencliff after confusion over its name—being similar to that of nearby Warren—resulted in a train collision. Beginning in 1909, the railroad depot here served passengers heading to the Glencliff Sanatorium, a treatment center for tuberculosis patients seeking fresh mountain air. The complex on Mount Moosilauke is still open today as a home for the elderly.

If you see haggard backpackers here, they’re probably headed to the community’s post office. The Appalachian Trail passes over Oliverian Notch here, and hikers use this as a mail drop. A hostel and grocer in the village also cater to hikers. You’ll cross the Appalachian Trail 0.4 mile ahead as it runs close to SR 25/Mt. Moosilauke Highway.

The rail-trail runs alongside the road, passing the Oliverian Pond, and then veers back into the forest. Concrete blocks restrict motorized use on the rail-trail through a wildlife preserve. You’ll arrive at athletic fields for the Oliverian School 2.5 miles past the pond, cross SR 25, and then take the trail across the boarding school campus (motorized vehicles are prohibited on the trail here). The route continues another mile to Jeffers Hill Road.

To reach the Warren trailhead from I-93, take Exit 26 onto SR 3A/SR 25 toward Rumney. Head southwest 4 miles, and take the first exit off the traffic circle to stay on SR 25 W. Go 7.4 miles, and stay straight where SR 118 joins SR 25. Go another 8.1 miles, and bear left onto SR 25C/Lake Tarleton Road; then turn right onto School St. The trailhead is about 0.2 mile ahead where Water St. and School St. intersect. Street parking is available along School St.

There is no official trail parking at the northern end.

The trail only exists for snow mobiles.

I did this in the summer of 2018. as others have mentioned, quite rough in spots. quite wet in spots. and sandy, i hate sandy.

could be a nice trail but as it is, i wouldn't recommend it for bikes, even a mountain bike. also, beware of the dogs.

with the exception of the Northern Rail Trail, New Hampshire needs to step up their game regarding their rail trails.

I did the western part of this trail August 15 and the east part August 16,2013 from about the Appalachian Trail crossing . The surface has deteriorated greatly in the last three years from ATV and dirt bike use with lots of thick loose sand, embedded stones and water holes. I had to walk several sections around deep mud holes. For most of the 6 miles you had to ride high on the sides to avoid the loose sand. Youker

January 2013, I parked at the AT parking lot in Glencliff on Rt 25. From there to the Missile in Warren was 5 miles. The ski in both directions was quite enjoyable.

Did this trail on April 27, 2013 on a hybrid bike with knobby 38c tires. I had a great time, but it presented some challenges. From E Haverhill to Warren, the direction I traveled the trail, it is basically downhill. Within the first 10 minutes I had to walk & carry the bike through a swampy railroad cut for about 100 yards. Had a couple of other occasions when I had to walk the bike as well, but for shorter distances. There is a section of the trail of about a mile, I'm guessing, where you're riding on Rt 25. Don't miss the cliffs on your left while you're on the road. It is not a hard packed trail & so is not suitable for road bikes. It took me an hour & 13 minutes to cycle from E. Haverhill to Warren (with some stops along the way to see the scenery). I traveled Rt 25 from Warren back to E. Haverhill & that took me 50 minutes. Enjoy the trail & don't miss the town missile in Warren (where else can you see one?).

I did this trail in pieces several days in early August 2010 to scout it out completely. There are eight places to join this interesting and variable 11 mile trail along N.H. Rt. 25. 1. At the town park and Redstone Missile in Warren. The trail also continues further souteast 2. At Gould Hill Rd. off Swain Road 3. At Station Road in Glencliff 4. At the parking lot for the Appalachian Trail just west of Glencliff 5. Where the trail ends and joins Rt 25 6. At spot a few hundred yards further along Rt 25 where the trail goes up a short hill and becomes a fresh logging road for a mile or so 7. At the Oliverian School and Rt 25 where the trail goes east on a double track to the concrete blocks at the end of the Oliverian property There is a short stretch between this section and the logging road where the right of way is not cleared by the ATV clubs and is grown up with small brush. One of the pictures shows this section where on can walk their bike about 25 yards between the end of the logging road and the concrete blocks. 8. Jeffers Hill Road off Rt 25 a mile west of the Oliverian School for a total of 11 miles. The grade is gentle in both directions. The logging road section is not a bad surface at all and I had no trouble with a hybrid bike. I did see both ATVs and Dirt Bikes on the trail. Youker 8/25/2010

8/4/10 I did about two miles at each end of the trail. The snowmobile/ATV trail goes longer in both directions. It is not hard to find the entrance in East Haverhill in the middle of the Oliverian School complex and the first 100 yards are easy to see crushed stone. There is no Oliverian Valley Campground but there is a baseball field. After a short piece the trail becomes a smooth two track dirt road. The other end in Warren has some auto traffic in the beginning and also ATV traffic for the whole length. It is a slight upgrade and a bit of loose gravel from the 4 wheel use. Youker