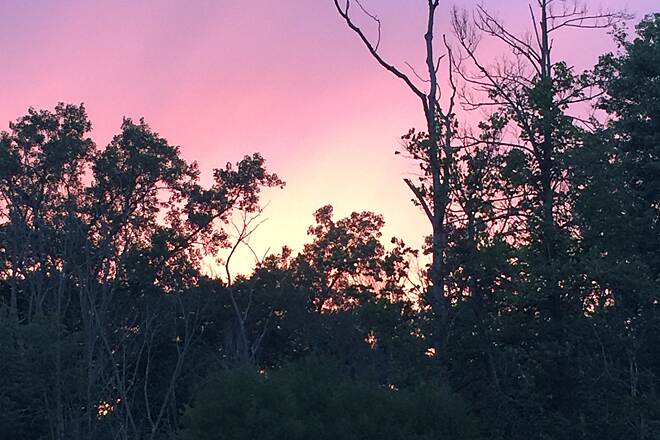 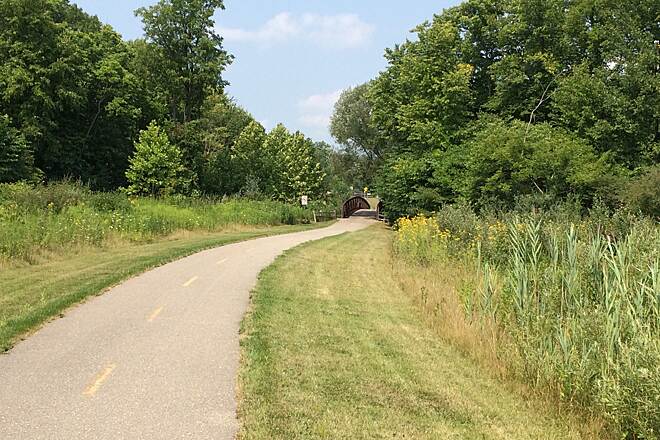 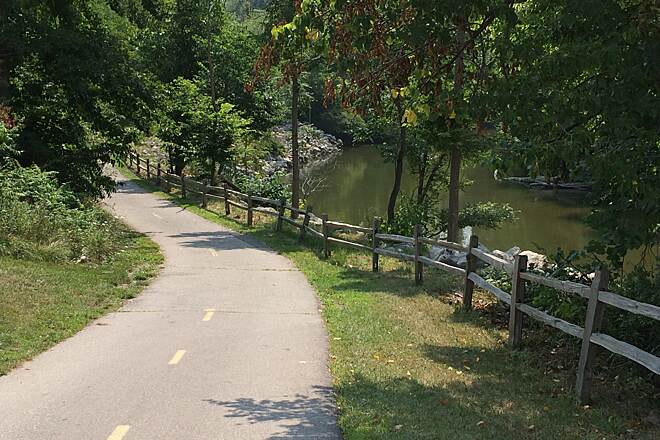 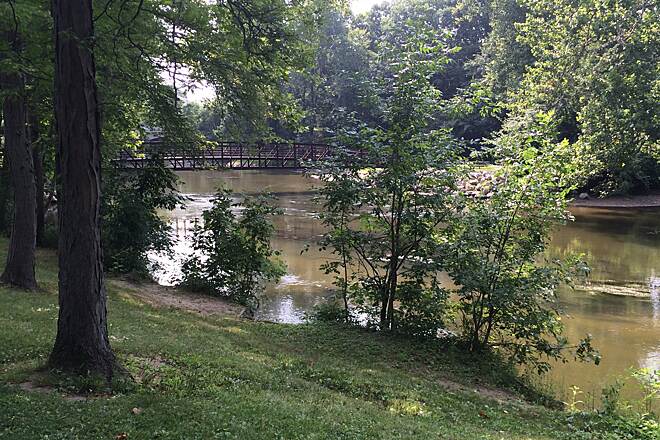 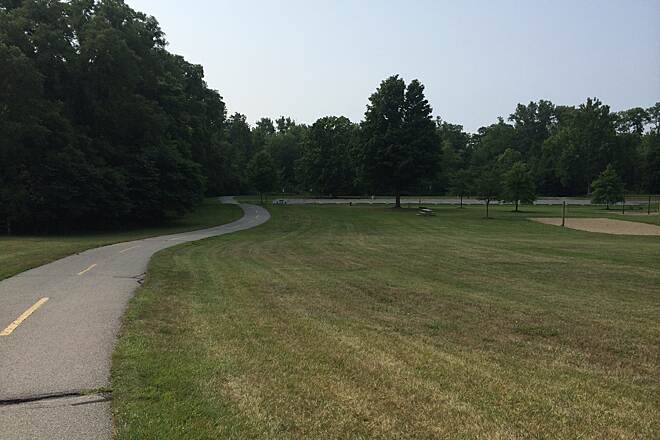 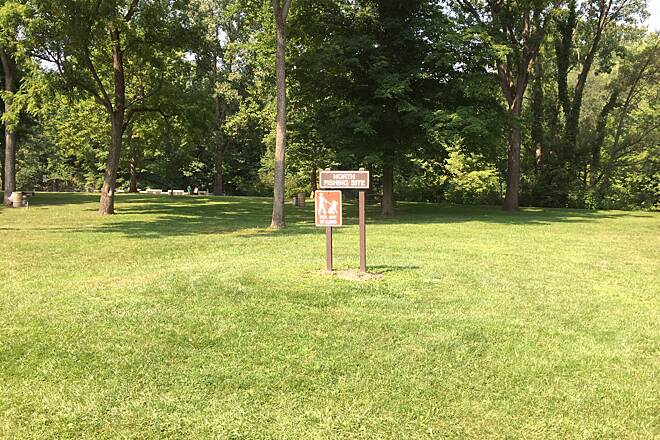 You won’t find this trail’s name on the ground: the continuous stretch is actually made up of the scenic trails within Oakwoods Metropark, Willow Metropark and Lower Huron Metropark, as well as a connector between the latter two. The route directly links the three popular parks in the regional Huron-Clinton Metroparks system, allowing trail users to travel uninterrupted for a 30-mile round trip.

The trail loosely follows the Huron River, at times offering views of the water and the wildlife that call it home. The quiet route is interrupted by reminders of the surrounding suburban environment infrequently, such as where it passes under loud Interstate 275. The trail conveniently connects to the I-275 Metro Trail on the west side of the highway, allowing those looking for a longer journey to trek north into Novi.

All three of the parks are beautiful places to relax or play, but they each have amenities that make them unique. In the north, Lower Huron Metropark offers a golf course and aquatic center. Willow Metropark too features a golf course, but a skatepark and disc golf course are included as well. In the south, Oakwoods Metropark contains hiking trails through mature woodlands, a butterfly trail to view Monarchs and a nature center at the Wayne County Metroparks Trail’s southern endpoint.

Parking for the trail is available within all three of the parks along its route.

Rode this for the first time on July 4! Park was being well used for the holiday but very few times did we have to slow down on the bike trail. We missed the turn to get to Oakwoods Metropark but still had just over 17 mile ride. Wish there were some markings on the trails because many places they seem to splinter off. Will definitely ride here again.

This trail has it all

I ride this trail every week 26 miles round trip.It has 3 big hills that take me right down into low gears.Really good work out.Lots of smaller hills.You only cross two roads from north end to nature center at south end and very little traffic on those roads.Very scenic with wildlife everywhere.I often see herds of deer in the Willow section(as many as 30 in a group)Never a boring ride.Road bikes to (Rollerblades with biggest wheels possible)will enjoy this trail.Connector trail at I275 near Huron River bridge can then get you on the I275 bike trail then will connect to Hines park trail and other trails.Try this trail,you will be surprised.

I rode this set of trails again yesterday after researching more about a trail through Flat Rock, Michigan out to Lake Erie. I started this time at the Flat Rock community center right off I-75 at the Ford plant exit. From there i rode west on the Flat Rock community trail along Gibralter road to Huroc Park. From there i rode the link trail to Oakwoods, Willow, and Lower Huron metroparks and then returned to the Community Center. Then i rode south from there and gradually southeast on a nice connector trail to Lake Erie Metropark and through the park to trail end at Lake Erie. This was a wonderful ride with a mix of scenery, nature, and some minor traffic and noise areas but those did not diminish the enjoyment of these interconnected trails. The only real rough spots were on the connector through Flat Rock along Gibralter road. Parking is plentiful at all trailhead connectors and the community center itself is a real gem. With some small exploratory side jaunts i took this was a total ride of 51 miles and nice to do on the first day of fall. Colors are changing in the trees.

What an enjoyable set of trails

A couple of weeks ago we rode this grouping of linked trails and found them very enjoyable. We started at Willow park and rode thru Oakwood park (the trail thru here has a lot of soft crack fill in it) and found the connector to Flat Rock. We then returned to Willow and rode up thru Lower Huron and we were very impressed with these trails and the beautiful countryside. Plenty of picnic and rest areas with bathrooms, water, and cool shade along the river in many areas. If you are looking for a scenic ride for a long day trip or just a family time you can do a few miles or a lot and feel safe and enjoy nature. At Flat Rock there is a short stretch in the road along Gibralter Road but then the link trail starts again and travels to a wonderful Rec Center with a woodsy setting, bathrooms, water, and a big front porch with rocking chairs. From there this link trail goes south to Carlson, per maps at the Rec Center, and we hope to do that section next time we are in the area. We would highly recommend these trails and there are several trail heads with parking safely.

How did I miss this?

I discovered this trail through the Trail Link site and I'm thrilled I did! This is a great trail! Very serene and seemingly endless. Some parts have significant traffic, but most of it is only sparsely populated. Peaceful exercise with a nature backdrop! I'm only sorry I just now found it after all these years living in Michian... .

I hadn't been on this trail in at least a decade, if not a dozen years. As such, I do not remember a lot of it. So in a few ways, it was like riding the trails again for the first time. My round trip started in Lower Huron Metropark, and I turned around at Huroc Park, in Flat Rock.

The first part of Lower Huron was uneventful--nice scenery, and some hilly terrain which I remembered from my last visit. My first wrong turn near the southerneastern end of Lower Huron had me going off on the wrong trail, ending up alongside Waltz Rd. and ending at Hannan Rd. in New Boston. Wrong move. I should have continued straight on the trail.

Back on correct trail, I had no problem getting to the first railroad crossing, which is protected by gates on both sides. Once you cross the tracks, you are on the connector trail, and off to the right there is a very small historic cemetery, the Nowland Cemetery, where some original area settlers from the early 1900s are buried. Immediately past the cemetery is a steep hill, of which there are a few along this portion of the trail. Very woodsy and scenic.

Right before you reach Willow, you will see a stub of a pathway leading to the I-275 Metro Trail. At the time of this writing (late August), the pathway is closed. I peeked around the barrier and it seems that in addition to resurfacing I-275, they have also refurbished this section of the path, as the asphalt looks smooth and fresh.

About 3½ miles later, you arrive at Willow Metropark. I remember the main trail was a circle around the park, so I stayed to the right. The trails here are mostly flat, but there are a few inclines along the way. There are a few trail intersections, which lead to parking lots, and there is also a trail which cuts through the middle of the park. Where I got a bit disoriented was on the southern end--there is a southern automobile entrance to the park, but the path to Oakwoods is about 2,000 ft. past that point. (Ironically, this is the one single point on the path that is marked.) From there, you cross Willow Rd. and you enter the Oakwoods Metropark. Be careful at this crossing, as posted speeds are 35MPH, and there is a slight bend in the road that blocks visibility.

Oakwoods is pretty much a straight shot from the entrance to the nature center. There is one ungated railroad crossing along the way, and the route is mostly flat. One thing that struck me was the condition of the Oakwoods trail--it is the roughest of the three, and not very well kept. There is a lot of soft asphalt crack filler in use, and there are a couple of sunken sections of asphalt. Unfortunately, the park itself looks desolate--on a summer Friday afternoon, there was nobody in the shack at the entrance, and I rarely passed anyone on the trail.

The new addition (for me) is the trail leading off of the Oakwoods Metropark trail that leads to Flat Rock and points east. The trail (which extends out to Erie Metropark) is part of the Downriver Connected Greenways Initiative. I took this trail only to Huroc Park. Not far before reaching the park is a third railroad crossing, gated. Like another review mentioned, there is a gate at the border of the Metropark and the Downriver trail, open during warmer months, but closed in the winter. (Given how little snow we have in our winters now, there is no reason not to keep this open year-round.) Just be aware that this path is not part of the Metroparks system.

Overall it is a very nice ride, quiet and scenic save for where you ride alongside and then cross underneath I-275. There are more hills in Lower Huron and along the connecting trail, but otherwise it is primarily flat.

Rode this trail 11-8-14. 42 degrees and rain tapering off at start of ride. Saw no other cyclists and only a few walkers or joggers. It is a pretty trial with some short climbs and dips, bridges, woods, and fields. Plenty of open restrooms. Mostly follows the Huron River. This is not a single path and directions are not well marked so it is easy to get a little lost. We got turned around three times. Bring a phone that has a compass and GPS map. Only disappointment was that at the eastern end when we wanted to exit the park into Flat Rock and then bike to Lake Erie the exit was gated and locked. The sign on the other side said the path that we were on was closed for the season. Did not make sense. Ended up doing 31 miles.

So many water fountains and restrooms!

The trail is paved and well maintained.
This is perfect for marathon training.

Unfortunately, the surface is not so smooth for road bikers.
There is a connection to I-275 trail system and so I could enjoyed an extra ride.

Now goes all the way to lake erie

Have ridden the trail many times and it is always pleasant. Can be busy in spots near parking. The best part is that it now goes all the way to lake Erie via a connector just North of the Oakwood's nature center. take the newly blacktopped trail thru a slightly confusing couple of blocks in Flat Rock and then it again becomes a pretty nice trail although runs along Gibraltar Rd for a bit, but on a separate wide blacktop trail. Heads past a little historical area in Flat Rock, a nice Rec Center in Flat Rock and ends up at the Lake Erie metro park where there are nice picnicking facilities, hot dog stand and a cool museum. About 13 miles from Oakwoods to the end of the trail. A nice 60 mile day end to end and back. Bathroom stops are numerous, and almost anything you might need along the way.