Looking for the best Horseback Riding trails around Brandon? 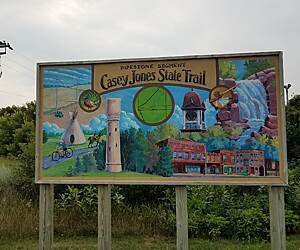 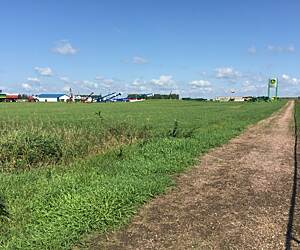 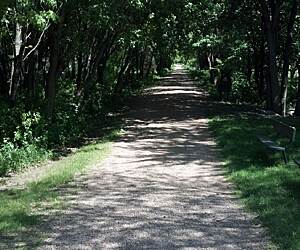 The Ed Winkel Memorial Trail runs for nearly 5 miles from the small town of Sibley in Osceola County, Iowa to just west of the unincorporated community of Allendorf. Offering a hint at much of Iowa's...

The Ed Winkel Memorial Trail runs for nearly 5 miles from the small town of Sibley in Osceola County, Iowa to just west of the unincorporated community of Allendorf. Offering a hint at much of Iowa's...

We'd read about the Sioux Falls Loop and decided to begin at the southernmost point and ride counterclockwise around the city. We started at Yankton Trail Park, heading east through beautiful parkland for a few miles before turning north at Tuthill Park. Here the trail follows the Big Sioux River, winding along its manicured and tree-lined banks, beside pretty picnic areas and soccer fields that no doubt come alive on the weekends. But it was lovely and quiet during this weekday afternoon; we passed few other bikers on the trail. Comparing the loop to a clock face, we started at 6 o'clock, then at roughly 3 o'clock, we came upon the falls for which the city is named. The falls are more like a scenic series of rocky cascades bordered by grassy parklands and the brick ruins of a former mill. It was very dramatic and beautiful. Immediately north of Falls Park, outside of the loop, is the Smithfield Foods, Inc., a large pork processing plant. Even from a distance of half a mile, the smell was offensive, and we tried to ride past as quickly as possible. We headed uphill (the only hill on the loop) through a small set of switchbacks until the trail flattened again atop a levy that divided the river from lumberyards and light industrial areas on the outside of the loop. At this point, the Big Sioux River looks pretty much like a wide, stagnant, tree-less canal. Plus, the trail circumvents the Sioux Falls Regional Airport from 2 o'clock to 10 o'clock, the whole north end and about a third of the entire loop. When we finally arrived at the small bridge that crossed over to the parking lot where we'd started, we realized that we'd unknowingly started at the exact spot where the trail became bucolic to the east and barren to the west. In hindsight, had we started in the other direction and headed up the west side of the loop, we would have sped downhill past Smithfield and had the lovely, shaded park area to pedal through for the second half of our ride. There's a really great local brewery a short drive from the Yankton Trail Park.

In late September of '21, my wife and I experienced the joy of this awesome, five-star urban trail on a weekday morning. Even though it's completely within the Sioux Falls city limits, you'd hardly know it except for the occasional sounds from distant autos, the even more occasional sounds from the airport flight path, and the beautiful buildings you glimpse as you pass through an exceptionally quiet downtown. For the most part you're enveloped within the serenity of trees, parks and greenways, surrounded by wide open spaces and golf courses, or hearing the thunderous noise of the falls at Falls Park.
Even though it's called Sioux Fall Bike Trails, we stuck to one trail: the twenty mile loop that follows the two forks of the Big Sioux River and essentially encircles much of the city. We started our ride at Farm Field Park, a popular starting point for the many walkers and joggers utilizing the trails, and proceeded in a counterclockwise direction. Thank goodness for my investment in the Rails To Trails Link app! There were a couple of instances where we unsure which fork in the trail to take, and the app kept us on the right path!
With the exception of some rough patches of asphalt and two plus miles on a gravel road due to construction on the main loop trail out near the airport, most of the trail was excellent, wide, flat, and provided smooth riding.
WARNING: Besides the temporary construction detour, be aware of the steep climb just beyond the falls up the side of a dam. If not for my sixty-three year old wife's Swytch pedal assist, she would have been walking her bike up that steep grade. To avoid that, consider taking the loop in a clockwise direction.
All in all, the trail lived up to it's five star billing and was worth the 2,000 mile drive from SoCal to check off another state bike ride on our bucket list! We experienced the beautiful falls, sculptures, wildlife, architecture, arriving and departing jets, trestles, bridges, levees, zoo animals, river views, trees, and the super friendly walkers, joggers, and bike riders of Sioux Falls.
( By the way, so many previous reviewers were rough on the part that goes around the airport, but it was especially quiet, peaceful, and serene out there except for the infrequent jet landing or taking off. I enjoyed the views from the levees and solitude away from the town as much as riding within it.)

I did the trail from Pipestone to Woodstock. I attempted to continue to the county line, but the final 2 miles leaving Woodstock isn't maintained. It was knee high weeds. Still, a really fun trail mixed with mostly asphalt, some gravel, and a little grass. My ride was 22 miles round trip.
I was riding a drop bar gravel bike with 40mm slick tires which was perfect for the trail. The first asphalt section is similar to a highway shoulder...mostly smooth with some cracking. The second asphalt section is very smooth. Next is mostly flat gravel which turns into grass through the park in Woodstock.
I enjoyed the trail, and will visit again. A fun ride!

I am from MT and this trail system is fabulous. It is so well laid out. I found it easy for the beginner trail rider that I am. Other users were friendly and were easy to approach with my questions. Let’s all ride to fight Childhood Cancer this month!

We rode this on Saturday September 4th. This is a beautifully maintained trail throughout its circuit. We did run come across a minor detour by the airport, due to construction, but the rest of the trail was wonderful.
We saw lots of people using this trail. It is very welcoming and the people we met along the trail were friendly and informative to this couple from Oklahoma seeking information at the detour.
Sioux Falls should be proud of this trail and we highly recommend it.

Very peaceful and beautiful. Short, but nice. Only 4 stars b/c the crushed rock can be soft and uneven in places.

Very peaceful and beautiful ride. Only a couple miles, but very nice. The reason for only 4 stars is that the crushed rock makes a soft and somewhat uneven riding surface.

We started the ride at the Pipestone Trailhead. There is a small, dirt parking lot with a vault toilet. Immediately, I was not impressed. The asphalt trail surface is in poor condition. Every 20 feet or so were major cracks across the entire width of the trail. Many of these cracks were filled with ankle-high weeds. As if that weren’t bad enough, you had to dodge pothole after pothole along the way. We cycled for about about six miles before deciding we had enough of this poorly maintained trail and turned around. It did appear that if we had continued that the asphalt trail surface in the next section might be better. We were lucky that it was a non-windy day. I honestly cannot recommend cycling this section of the trail. Perhaps if there is another section that is paved, it might be worth starting at a different trailhead than Pipestone.

We road the trail today. We road by several parks, the zoo, golf courses and a prison. Nicely maintained trail w several bike repair stations w air and tools for public use.

This was LONG! We didn’t know how long, lol! We found out! We rode the whole thing. It’s best from Falls Park going towards the older downtown instead of the other way. The rest is fine but can get a bit dull out by the airport if you’re a person who enjoys scenery as you ride, however that’s just me. :)

The ride was flat for the most part and connected the many parks around Sioux Falls. You won’t want to miss it. 20+ miles. It’s a bit tricky to follow in spots near downtown because there are a lot of off-shoots, so it was nice to have a local to follow. Some of the sections could use some horizontal crack fixing (bumpy), but overall a great experience.

We rode the 26 +/- mile route in mid July 2019.... Very nicely maintained trail and quite well marked. Mostly level with a few grades, nothing major. Wind was a nuisance the day we rode, but still a great experience.