Looking for the best Horseback Riding trails around Lewiston? 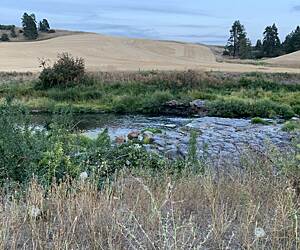 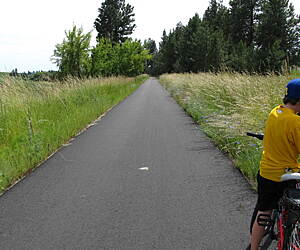 The Colfax Trail follows an abandoned rail corridor, which snakes along the river northwest of the town of Colfax. Along the way you'll likely see wildlife in the surrounding Palouse hills and the...

The Colfax Trail follows an abandoned rail corridor, which snakes along the river northwest of the town of Colfax. Along the way you'll likely see wildlife in the surrounding Palouse hills and the...

A great ride for all ages

While short, this is a fantastic trail that I run and bike on all the time. I've rollerbladed on it too, although there are enough tree roots and other challenges that made rollerblading on it a one-time event.

Great trail for biking between Pullman and Moscow

I only bike this trail, when I want to go to Pullman for some reason and prefer to bike there rather than drive. I don't choose this trail to bike on for the scenery, because the Latah Trail between Moscow and Troy is a lot nicer. But I do like this trail a lot. While you are parallel to the highway, which isn't a big highway by any means, it's not as loud and intrusive as you might think.

My wife and I walked two thirds of the trail. Finding the trail was a little tricky. When we got to the trailhead there was no real sign identifying it, but it was obvious it was an abandoned rail road spur.

The trail bed is unimproved, but clear of weeds. It is a gradual slope following the Palouse River. We spotted what looked like a great swimming hole and commented about how nice it would have been to take a skinny dip there.

About halfway down the trail you come across another gate which did have a trail maker on it! A short distance down the trail from that gate, though, there is the remnants of an old bridge across a small gully. There is a sign there indicating the bridge is unsafe to cross, but there is a bypass path around that bridge.

The trail enters into a small canyon which is very scenic. There appears to be a road above the canyon, but we did not notice any traffic. Due to the time, though, we had to turn back.

As we reached the trailhead we met some high school boys who said they were going up to the swimming hole to take a dip. They did not appear to have swimming trunks. Later, we had to laugh about what it would have been like if they came across two people old enough to be their grandparents skinny dipping in that hole, or if we had gone just a little further and then came across them as they were skinny dipping.

I believe this old spur would have eventually lead to a covered bridge, but it is apparently on private property and cannot be accessed. I would hope that the conservatory would work with the county to arrange access to the covered bridge. It would make the trail much more attractive.

Previous descriptions still hold true. The path as it goes into Hellsgate Park is more of a campground path; okay pavement but narrower than the rest of the path. To cross Memorial Bridge it was a bit confusing as there are no signs for where to go. As long as you know that's where the path continues, you should be able to find it (on the north side of the Clearwater River, it's easiest to pick up the path on the west side of the bridge).

This trail has a bit everything, including views of the Palouse, a forested area, and bridges and tunnels. You can even park at Troy City Park and leave your car overnight if you only feel like bicycling one way. It will most likely be a destination trail once the Troy to Kendrick piece is complete.

There are no markers or signs whatsoever. P for parking shown on the map doesn't exist. What I believe is the trail head looks just like all the private property around it, and has a cattle gate across it with livestock on the other side. The other end of trail might be accessed, but the road is closed from Nov to March. We stopped by a local store to ask where the trail was, and no one had heard of it. They said the only rails to trails they knew of was the Pullman-Moscow trail about 15 miles south. We finally found a guy who said he knew it. He told us it was not really a trail and we would have to climb over barbwire fences to use it. On the upside, after driving to both ends of the trail, it really appears to be a beautiful area. We'll try again in March to see if we can find the other end of the trail. The access on W. River Dr is non-existent.

As indicated in the description Latah Trail continues beyond Troy down Little Bear Canyon. Eventually the Latah Trail Foundation would like to extend the trail down to Kendrick, but as of 2013, it only goes four miles.

The positives: Little Bear Canyon is very secluded, there is no road next to the trail. The bridges that have been completed are in excellent condition, a cement overlay on existing rail road trusses.

The grade seems to be between 3% and 5% so going down the ride is quite easy.

The negatives: the trail bed consists of very loose gravel. I would not recommend it for any street bike. My wife and I used mountain bikes, and we found ourselves having to work to control our steering.

As we returned up the grade, the gravel impacted our ability to bike back up the grade. We eventually had to walk out the last mile, but I think that was more a reflection of our athletic skills.

Definitely take water. While the trail follows a stream, much of the stream is on private land on either side of the trail. The water is not potable.

There is a uncompleted shelter at about the two mile mark. I would hope the foundation will complete it in the near future.

I look forward to having this trail completed all the way to Kendrick. It is a great canyon ride in spite of the loose gravel.

Most of the trail is wide enough for two people to ride horses side by side. There is a small, spring loaded gate at the beginning of the ride that my friend got off to open, I was able to carefully ride through. There was a large gate that we were able to open from horseback. There was also one gate to ride around (go on the uphill side). There was one water crossing with some large rocks and a little mud- keep to the uphill side to avoid a culvert. there is a little train trestle type thing that is abandoned. There is a ride around trail that has a short and somewhat steep decline, then a little flat area, then right up the other short and steep side. Our horses did fine on everything. Lots of wildlife. We saw quite a few joggers/walkers. Everyone was very nice.

I enjoyed what I saw of the trail, but around the 2.8 mile mark the trail was blocked by tons of really BIG boulders. Had to turn around.

Easy commuter trail along the creek

This trail is perfect for an evening workout or leisurely ride. It is a slight but noticeable downhill from Moscow to Pullman, the two end points of the trail. Also there can be a strong wind from the SW. So keep these two facts in mind when take off. The trail is well marked, wonderfully maintained, smooth surfaced with great views of the rolling wheat fields of the Palouse. It also connects to the Paradise Trail system in Moscow and through to the Latah Trail to the city of Troy. Good for roller blades too.