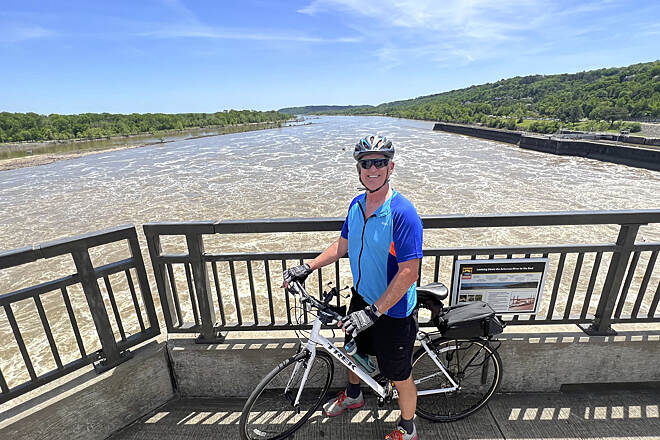 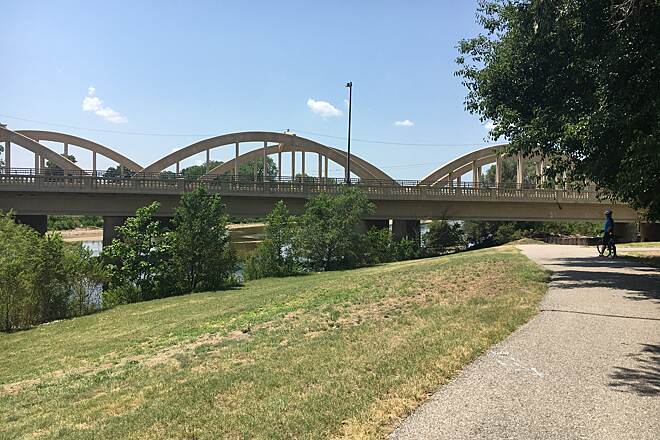 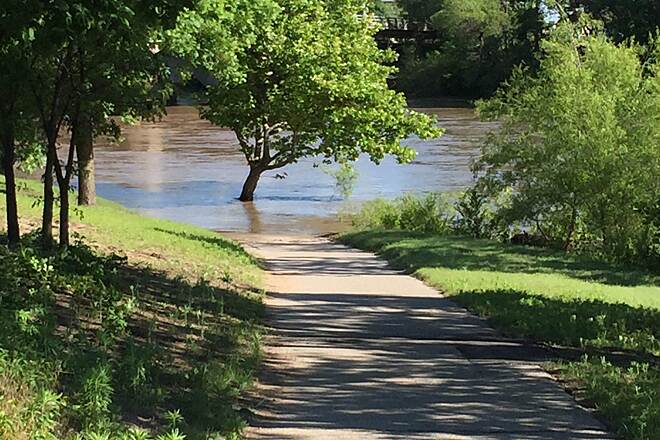 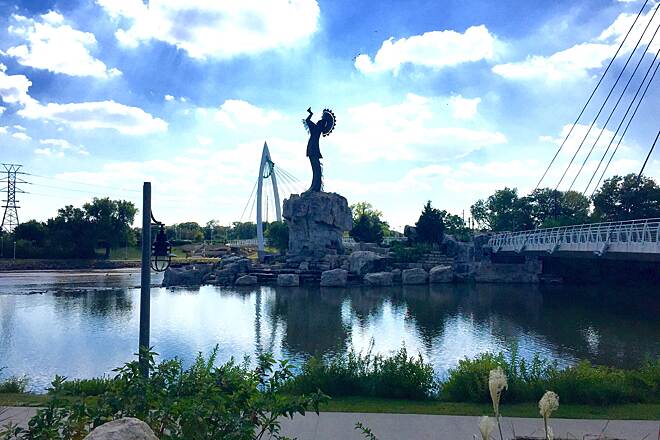 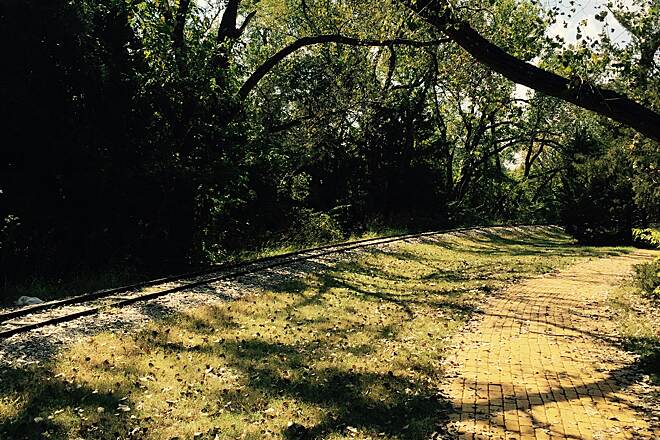 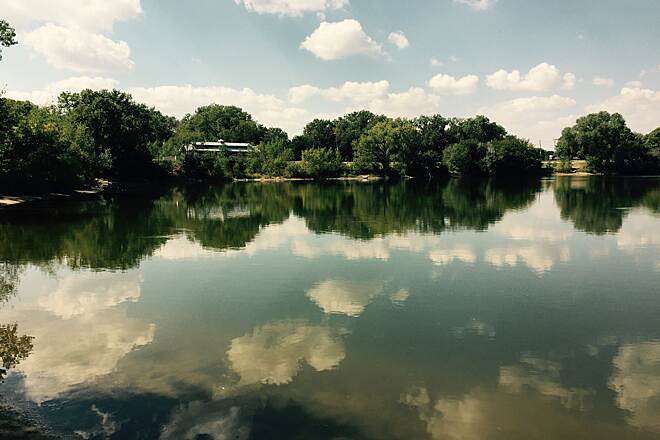 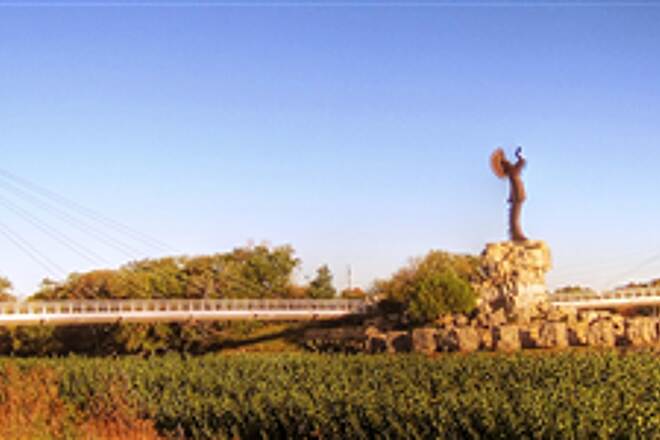 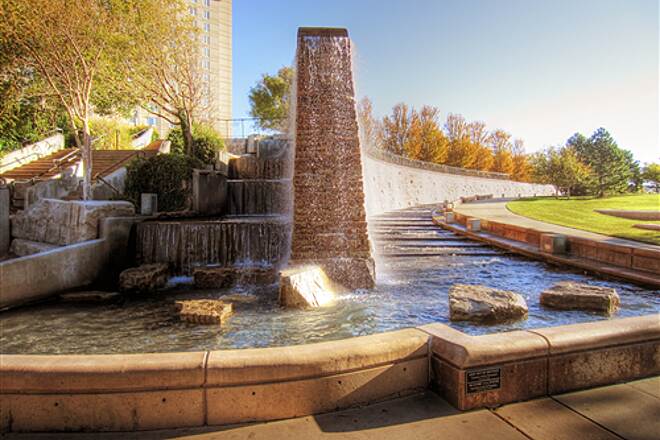 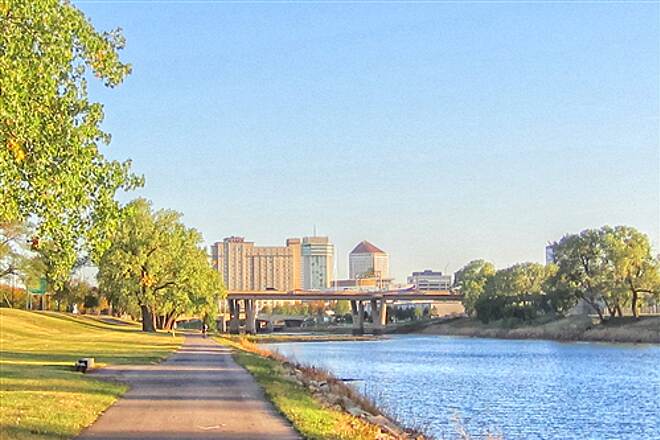 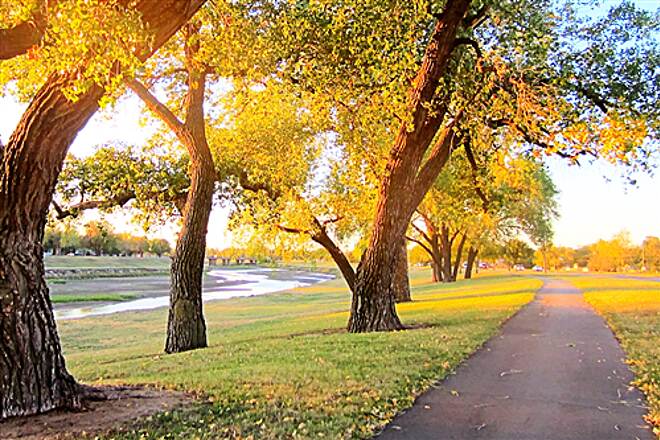 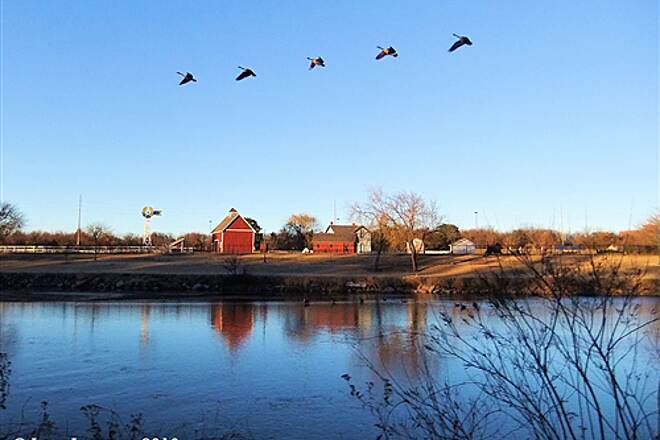 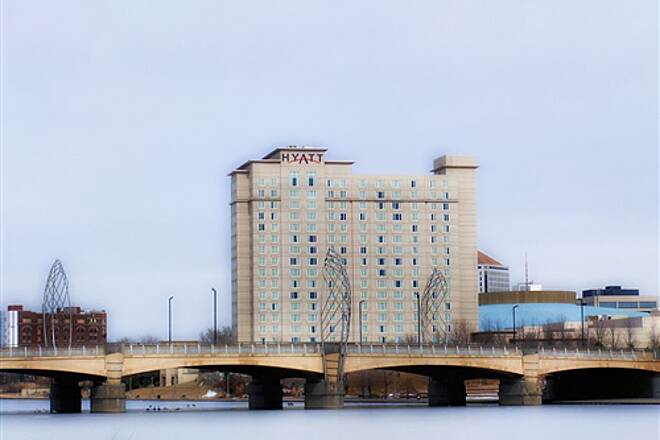 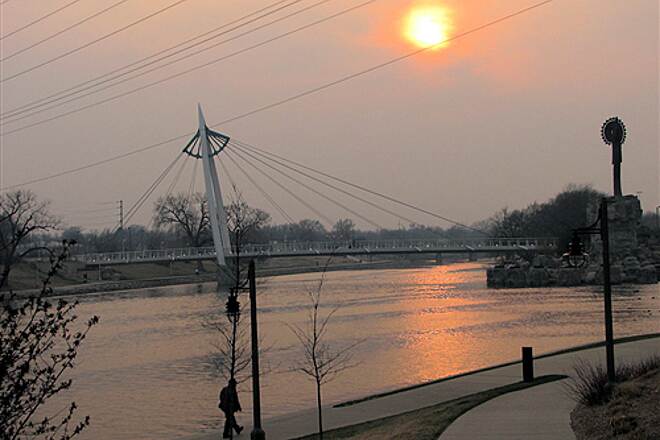 View Trail Map Send to App
The 10-mile Arkansas River Path is Wichita's longest and most popular multi-use trail, running mainly along the southwest bank of the Big Arkansas River between 21st Street (near I-235) and Galena Street at S. Washington Street. There are also two disjointed paths along the west bank of the river; one parallels McLean Boulevard between Seneca Street and 13th Street. Here you can link in Sims Park via a pedestrian bridge (near Central and McLean Boulevard). The other loop is between Kellogg Street and Central Avenue.

The Arkansas River Path provides access to parks and city attractions, including museums, the stadium, ice rink and the zoo.

Parking for and access to the Arkansas River Bike Path is available in many places, including off 21st Street (at trail's end), at the Westside Athletic Fields, Exploration Place, Cowtown Museum, along Mclean Blvd. south of Harry Street, Watson Park and at the southern terminus at Galena and Washington streets.

Started at south end and rode to the north end, then returned. Switched sides of river a couple times. The trail at each end isn’t as nice as the portion of trail at the middle part of the trail at the “Keeper of the Plains” plaza. The plaza area is very nice with a Veterans Memorial park to see in addition to the Keeper. Plenty of walkers and riders on the trail on a nice Saturday afternoon. Recommend this trail.

This is a great Bike Path. Although, I highly recommend to bike during the day as there are a couple areas along the way that are a bit sketch. There are several stops on this journey. I will definitely ride on it, again.

You can go along way on this path. You can start pretty far south(I have started at the dog park at hydraulic and i135) and go all the way to Sedgwick county park. This might be several paths but most of it is Arkansas river path. Lots of path. Few stops.

Enjoyed the well maintained trail from Fairfield Inn to the Keeper of the Plains statue. After that the trail deteriorated - several dead birds on the trail and approximately 1 mile from the statue the trail was flooded!

Since we were staying at the KS State Fairgrounds RV Park, we cycled to the start of the trail at Rice Park off of 23rd Avenue. We cycled to and around Carey park. We took the surface roads back to the fairgrounds.

While the trail is a very nice ride along the river and through some of Hutchinson’s city parks, the trail surface needs maintenance. In some sections there were large cracks in the pavement. Other sections had tree roots uprooting the path. It was a kthunk-kthunk-kthunk ride on our hybrids. Luckily, these large cracks were marked with paint and were visible but the ride could have been more comfortable. There weren’t any benches to sit along the path until we reached a park like Rice or Carey.

Overall, we enjoyed the ride. Carey Park was quite an impressive park and a nice place to stop and have lunch. So, if you are visiting the city, as we were, I would recommend a ride along this trail.

Very pleasant ride and a very popular weekend trail. The section North of US 400 (Kellogg Avenue) has the better views. I would start my ride from the northwestern area (parking off 21st Street) and head SW. That way you have the wind on your back during the later part of the ride, when you are a little tired!

I ride this trail daily. It has some great scenery paralleling the Arkansas river, on the west side it winds past the Keeper of the Plains statue and through Exploration Place and on down past Lawrence Dumont Stadium. On the east side of the river you can see the Veterans Memorial pass by Century II, and the water wall at the Hyatt. This path connects to other Wichita trails and parks. You can ride many miles without ever crossing a street. If you do ride these trails please remember to be courteous to pedestrians and Bicyclist as well by announcing your self when passing. Happy riding.

If you only have time for one bike path ride in Wichita, this one should be it.

It has decent to excellent quality surface, mile after mile without traffic interruptions, very good scenery along the river, and connecting paths or routes to most parts of the city.

The path crosses only one street, 15th (at McLean Blvd), and it is a small street.

There is a closure at an overpass south of Kellogg (maybe Harry?) that is being worked on. I was able to pass by the closed signs, but that could change. In that event, you would just spur up to the street level and cross with a crosswalk, then spur back down to the river.

The 'big' climbs are just up and down the river bank. Other than that it is a gentle up grade with the river as you go north and west.

There is a water fountain and restrooms at a small park at the very south end of the path (Galena at Washington on the east side of the river, close to Hydraulic and MacArthur). There were at least two other water fountains along the path, though the one at 13th was not working for me. But this is in a populous area and one could find water re-fills about anywhere during business hours.

From the south end, the path follows the east bank to Broadway where the bridge has bike lanes well-separated from traffic on both sides of the bridge as you cross to the west bank. This southern-most section is a little rougher than the rest, but still ok even on a road bike. From this point the path stays on the west bank to the north end at 21st street. In addition, another segment on the east bank runs from just north of Kellogg up to 13th street. There are a handful of east-west connection opportunities along this stretch of dual path.

This path network connects to the Zoo/Park path network via either the Zoo Blvd bike path or the bike lanes on both sides of Westdale Drive. There is a playground north of the Zoo along the bike path with water fountains.

Connections to the east side of town are mainly via the bike routes/lanes along 1st and 2nd street. Coming from the east, find the path via the Central path or the 1st street bridge, among other chances. The sidewalks are legal to bike in the downtown area, though I tend to use the streets unless in rush hour.

Remember the city buses all have dual bike racks on the front at no extra charge if you need a lift toward home. Limited evening and saturday service, however.

One can reach most of the city's main attractions and events right along this path network without traffic.