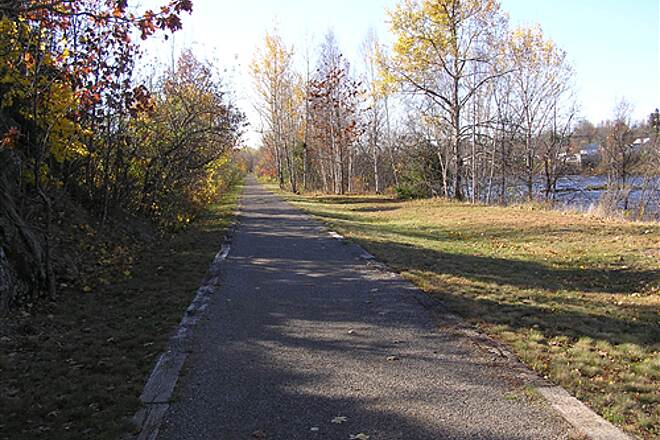 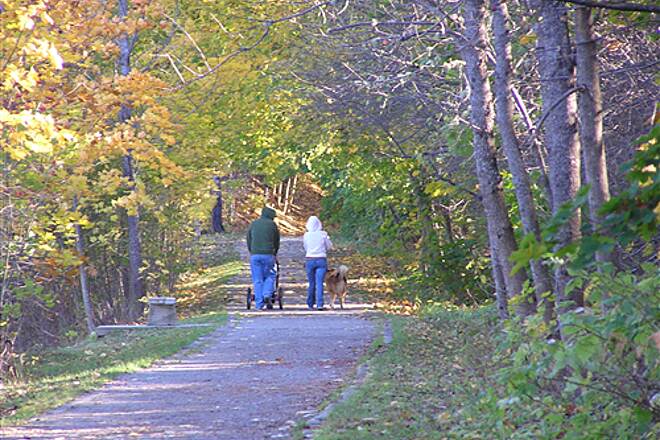 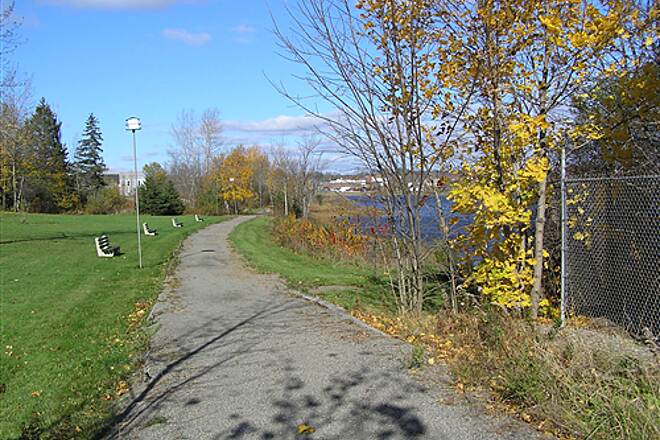 The Calais Waterfront Walkway provides a path for a short stroll along the Saint Croix River on the border between Calais and Canada, but it’s also the start of something much longer. The 1.5-mile rail-trail marks the first mile of the East Coast Greenway, a project envisioned as a 3,000-mile off-road trail for non-motorized transportation, stretching from the border in Calais to Key West, Florida.

The gravel path got its start as a railroad, the first to be granted a charter by the state in 1832. When the 2-mile railroad between Milltown and Calais opened a few years later, horses provided the power to haul lumber from a nearby mill. The rail route then extended south to Baring and became the Calais & Baring Railroad. More extensions and ownership changes followed until 1904, when the Maine Central Railroad took over. The line eventually became the Calais Branch, with service to Bangor more than 130 miles away. Although the railroad eventually discontinued use on most of the line (including the section that’s now a trail), a segment from the western end of the trail carries pulp wood products between Calais and Milltown and then into Canada.

Calais is an international town with three entrances into New Brunswick, Canada. The northernmost crossing at the midpoint of the trail marks the beginning of the East Coast Greenway. It travels east along the Calais Waterfront Walkway for 0.8 mile until the trail ends. From there, East Coast Greenway travelers use road shoulders until they encounter the next off-road section.

The Calais Waterfront Walkway trailhead is located about midpoint at the riverfront Pikes Park, although it’s easily accessible anywhere along the river. Heading east, the trail immediately passes the brick Calais Free Library, built in 1892. It’s just one of the 19th-century brick buildings standing in downtown, much of which was destroyed in a calamitous fire in the 1870s. In front of the library you’ll find the sculpture Nexus, one of more than 30 erected as part of a 200-mile-long sculpture trail in coastal Down East Maine. About 0.2 mile east of the trailhead, a narrow side path heads right to Main Street and the Dr. Job Holmes Cottage, which dates to at least 1805. A museum displays photos and artifacts from early Calais. The trail ends at Barker Street, where the East Coast Greenway continues onto South Street.

Returning to the trailhead and heading west, you’ll pass beneath Main Street spanning the river to St. Stephen in New Brunswick. The Canadian town’s scenic skyline is easy to see from Calais. If you have proper identification for crossing borders, you can ride on St. Stephen’s mile-long Riverfront Walking Trail and visit the town’s Chocolate Museum.

Emerging from the underpass, the trail continues west and then south as it follows the river’s forested banks for another 0.6 mile. Keep your eyes open for bald eagles that feed along the river in this area.

I love this trail along the river. It is well maintained and lovely throughout the year.