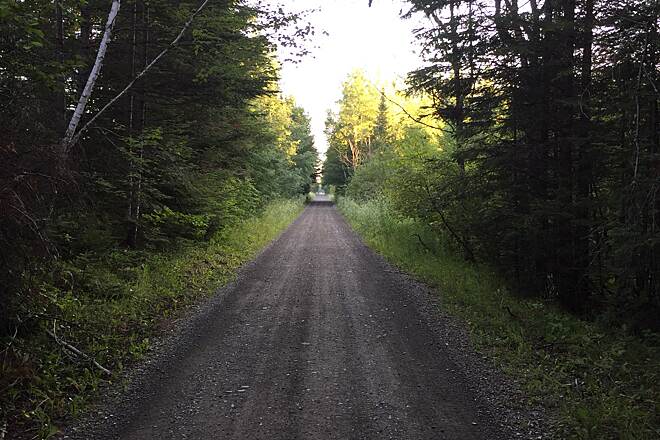 Northern Maine’s pine trees and potatoes inspired the railroad that survives today as the 38.8-mile Southern Bangor and Aroostook Trail. Located in eastern Aroostook County near the Canadian border, the trail extends from near Presque Isle south to Houlton, mostly through farmland with occasional excursions into forests and wetlands. The county is a cultural center for Acadian French heritage and a destination for vacationers interested in viewing wildlife and exploring the outdoors.

The trail is part of a 1,200-mile network of private and public thoroughfares for ATVs in the county, the largest east of the Mississippi River. Trail users can expect infrequent brushes with logging trucks using the hard-packed crushed rock and gravel trail. In addition to walking, biking, and ATV use, permitted activities also include cross-country skiing, snowmobiling, snowshoeing, and dogsledding.

The trail traces the railbed of the Bangor and Aroostook Railroad, incorporated in 1891 to take over two previous rail lines. The company extended its tracks north from the existing terminus in Houlton, reaching Presque Isle in 1895. Although it carried passengers until 1961, the railroad mainly served the forest products and potato industries. At one time the county was the nation’s largest spud producer. That potato traffic disappeared in the 1970s after mishandling by another railroad, and many of the Aroostook County lines ceased use.

Starting in the community of Phair, about 5 miles south of downtown Presque Isle, the northern part of the trail passes through pine forests along Williams Brook and Prestile Stream for nearly 9 miles until it opens up along a utility corridor south of Westfield. The trail continues south flanked by vast stretches of farmland.

About 5 miles past Westfield, the trail enters Mars Hill, named for the Mars Hill Mountain that rises 1,200 feet above the countryside to the east. You’ll find grocery stores and diners in the town, which is a destination for snow sports enthusiasts in the winter.

Heading south from Mars Hill, vast stretches of farmland flank the trail as it follows Prestile Stream to Robinson. The trail follows US 1 most of the way and crosses the highway in Bridgewater. It enters another forest south of town and climbs a gentle slope for about 7 miles before descending to cross a bridge between Hoyt Road and Station Road over the North Branch of the Meduxnekeag River. There are many opportunities here to view local wildlife, such as white-tailed deer, beavers, and red squirrels. More cautious animals, such as black bears, coyotes, and red foxes live here as well, and moose might be seen in wetlands.

About 2 miles after the river crossing, the trail runs alongside US 1 through the community of Sharp, which has a café. The trail continues south through more farmland for about 12 miles to Houlton. A gas station mini-mart on US 1 about 2.5 miles south of Sharp offers the only services along this stretch. It’s 0.4 mile east of the trail via Station Road.

I have to say, these trails are amazing for everyone, every age, every level, and any size group. Get out and ride these very user friendly flat scenic wide trails.