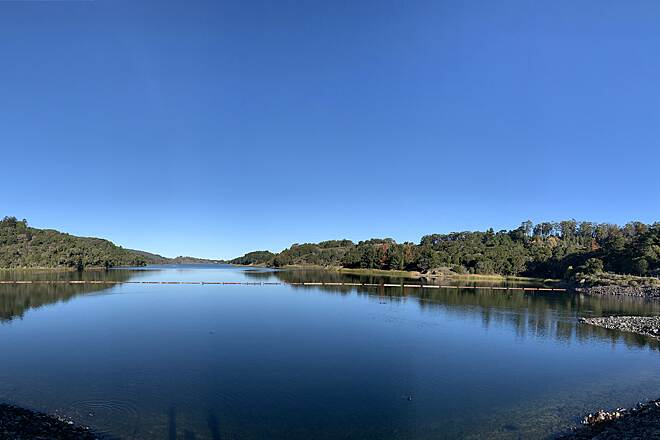 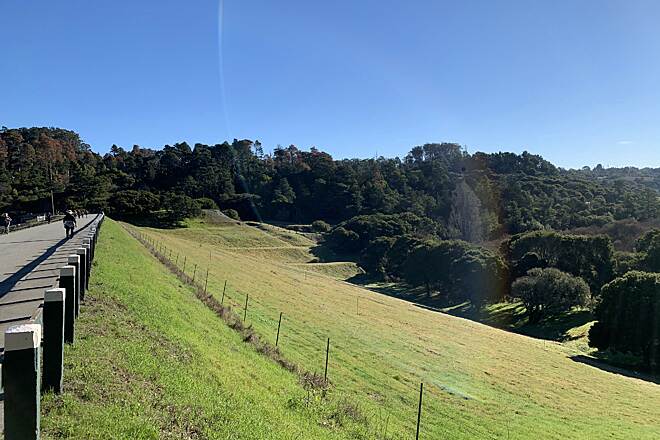 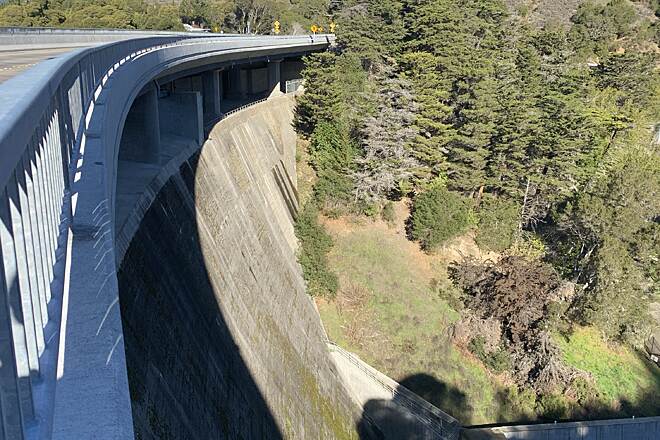 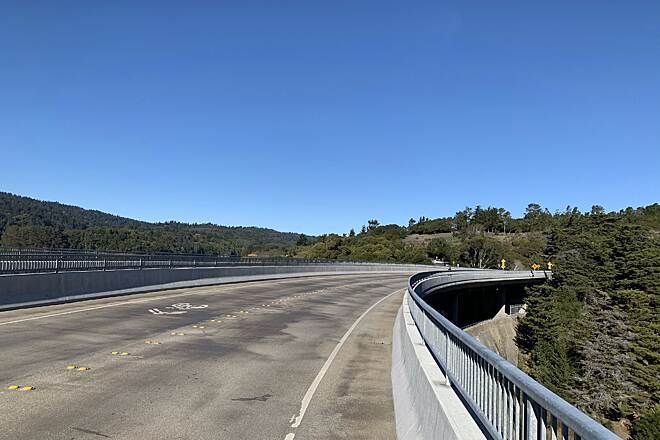 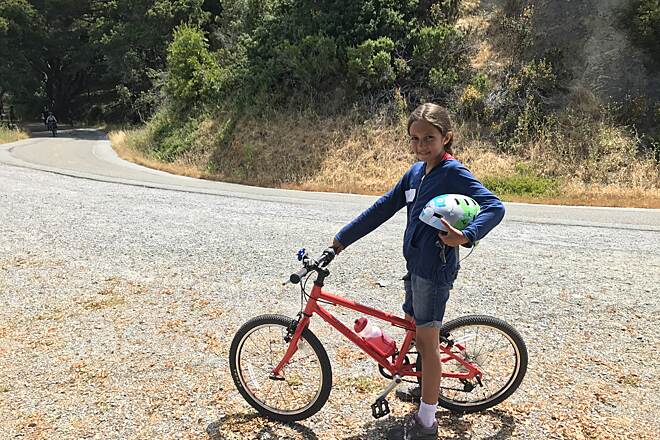 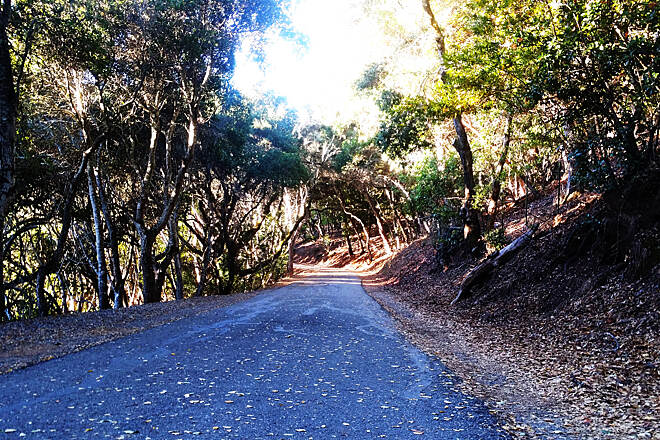 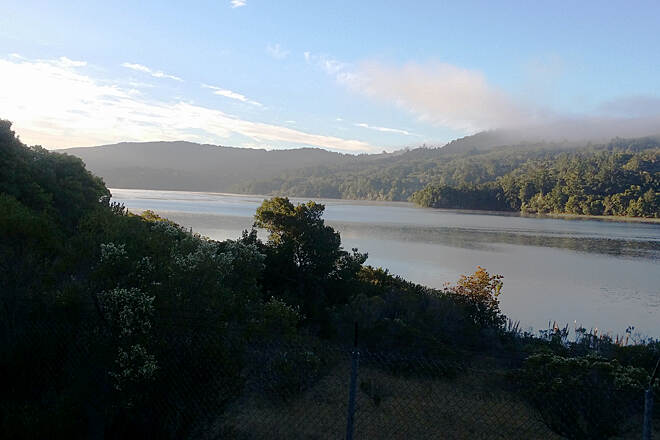 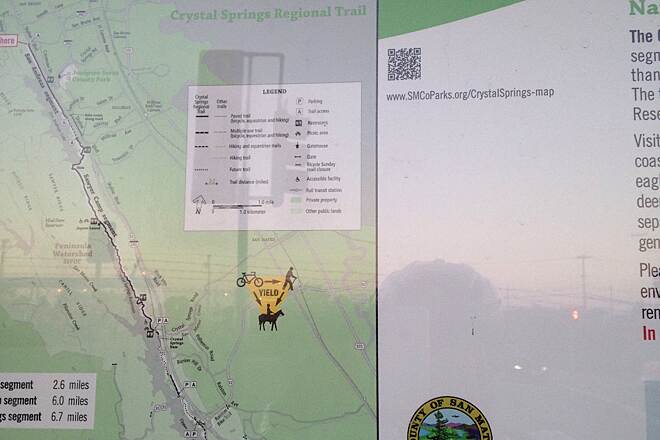 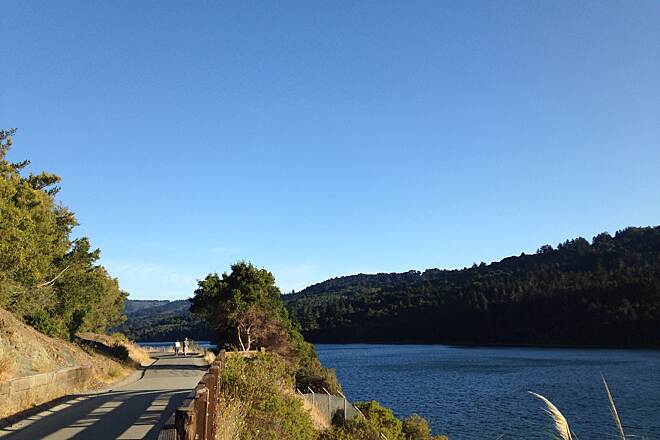 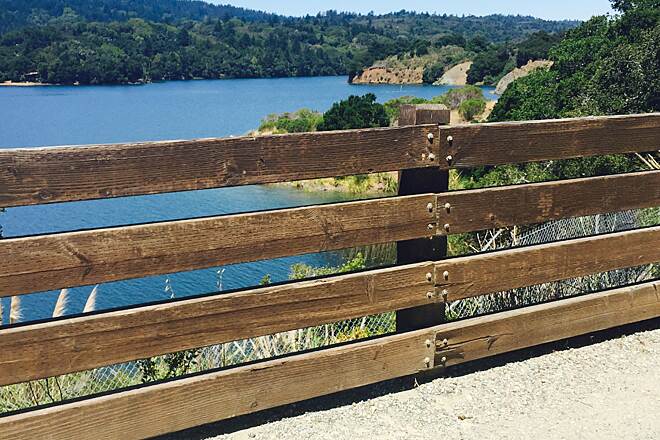 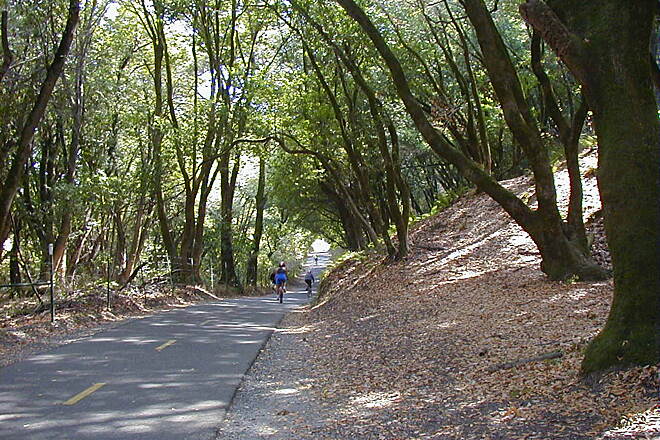 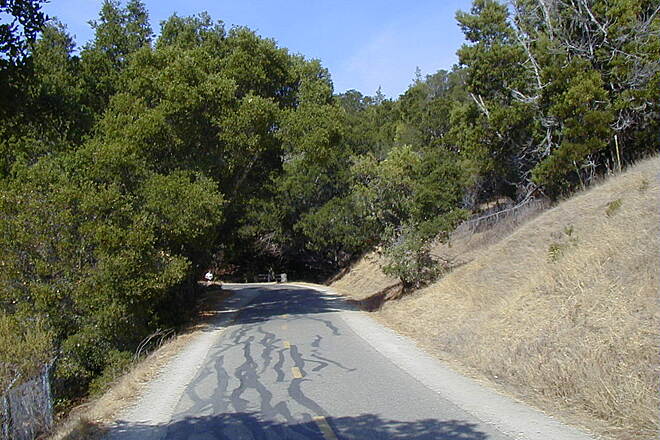 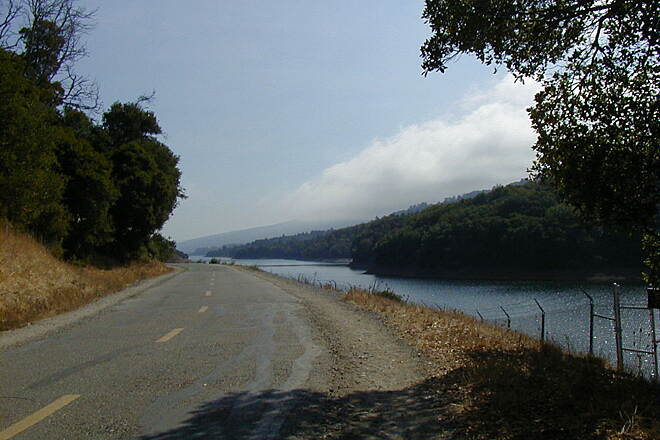 Both the San Andreas and Sawyer Camp segments pass close to San Andreas Lake, offering sweeping scenic views. Continue on the Sawyer Camp segment for additional stunning views of the Lower Crystal Springs Reservoir. The trail is historic, too: it follows the path of the old wagon route that was once the main travel lane between Half Moon Bay and San Francisco. Due equally to its jaw-dropping scenery and fascinating history, this portion of the Crystal Springs Regional Trail is by far the most popular trail in San Mateo County's park system.

After a short gap, the Crystal Springs segment begins near the junction of Half Moon Bay Road (State Route 92) and I-280. Less scenic than the two northern trail options, the route is still a convenient option for hikers and equestrian users to add on trail mileage or to access Huddart Park at the trail's southern end.

So obviously I'm not from around here. A transplant from DC where the traffic is much worse and so is every driver (skill/courtesy) in the Capital Region.

I did several laps starting at the North Trailhead Sawyer Camp Trail (vicinity E. Hillcrest Blvd) down to the Intersection of Skyline Blvd & 35/92 and back. Most everyone was courteous and aware, which is a plus and something alien for me (DC trails are notorious for self-absorbed, totally unaware, and rather rude walker, joggers, cyclists, et al (EXCEPT Indianhead Trail in MD - an AWESOME rail-to-trail to clock in 26 mile laps if you're preparing for long-distance rides).

That said, the volume of folks on the trail, combined with the twisty-turny route (fun but not if you're supposed to be down in the aerobars) is probably not the best place to put miles on the saddle if you're training for distance cycling (sic Ironman) on a TT/triathlon bike... but road bike, mountain, or cyclo-cross sport bike would be preferred.

The trail surface varies from smooth paved, to a slightly ribbed potions that aren't that bad. Uh, at least 6 bathrooms (clean with good locks). I didn't see (wasn't really looking for) any water stations. It's somewhat hilly but not a lung-buster. Lot's of free speed (downhills) and even the false flats any momentum can be maintained.

The scenery is great and whatever flowers were blooming were a good offset to my odor-de-triathlete. Lots of tree canopy cover and a nice breeze to keep cool. One rather large deer crossed my path... good thing to keep at least one hand on the brakes.

All in all, a great place to road/mountain bike = five stars (three stars if you're riding a Tri-bike =)

Thursday, January 3, 2019
My wife and I started this ride at the northern most entrance at the corner of San Bruno Avenue West and Skyline Blvd. We parked at a dirt church parking lot across from the trail head that a sign said was open to the public. TrailLinks indicates there is parking at the San Andrea Trail parking lot about a ½ mile down the trail along Skyline Blvd. It not really a parking lot but more of a wide spot on the road. I actually didn’t recognize it on the first pass as there was only one car parked there.
Heading south from the trail head (you begin on the two lane paved San Andreas Trail) you begin a rolling incline as you ride along next to Skyline Road. After about 3 miles you will top out as you head toward the San Andreas Lake and begin a long 400 foot drop over the next mile or two to the San Andreas Dam. Pedaling is optional and by this time you have passed at least one bathroom…expect to see more.
By the time you reach the dam, you will be on the Sawyer Camp Recreational Trail. The view from the dam was spectacular, particularly as it is quite green this time of year. There are plenty of tree covered sections to make you really feel you are outdoors. A pretty nice feeling for being in the “city”. There are also several historic sites marked along the trail.
After crossing the dam your drop further down into the creek. The trees provide quite a bit of shading which would be good in the summer months but got quite chilly for our ride. There are picnic tables and of course, another bathroom.
You will eventually end up along the shore of the Lower Crystal Springs Reservoir. Again, spectacular views and a ton of friendly deer. We also began to encounter more and more hikers as this section is easily accessible from the entrance at the Sawyer Camp trail head next to the Crystal Springs Road and is pretty flat all the way to the bottom of the San Andreas Dam. Not too much of a problem for our week day winter ride, but I expect this would get very crowded on weekends and summer.
We made our turnaround at the Sawyer Camp Trailhead (10 miles from our start) but not before making a side trip about a mile and a half north UP Hwy 35 to the Crystal Springs Golf course for lunch. The menu was typical bar food. The cheeseburger was huge and tasty. I would suggest splitting one as it came with a very large order of fries (my wife got onion rings). It was a small restaurant/bar overlooking the driving range.
My wife and I have Specialized Como electric bikes so the pedal assisted ride back up the trail was not difficult. But the incline was not that steep and was steady over a couple miles. Good gearing and little patience should not dampen your ride.

Total round trip (including the 1-1/2 mile one way side trip for lunch) was 22 miles.

This was our first ride of 2019 on a route we had never been before and we have lived in the Bay Area for 30 years. A hearty thanks to TrailLink for highlighting this on their web page!

I did the 11 mile round trip from the Southern Sawyer Camp trailhead to the San Andreas Lake dam and back with my nine year old daughter on a Saturday morning in June 2017. It was her third bike ride of this length and was a big hit. Parking can be tight and the first two or three (freshly paved)miles are crowded with pedestrians, but otherwise perfect for an extended and interesting trip with a child. Unlike a lot of flat paths around the Bay Area, this one has lots of interesting curves and varied scenery. The last stretch to the dam is uphill and a but of a challenge for small ones, but also brings a sense of accomplishment. Highly recommended.

I ran here for the first time starting at the Sawyer Camp Trail entrance and absolutely loved it! I got there around 8:30am, which was perfect because parking gets crazy! The trail is scenic throughout and covers you from the sun from the most part. I will definitely be back!

I was really looking forward to this ride today. I tried the Northern part, but all trail access points were closed for bridge construction. I will try it again after the construction.

Really enjoyed this bike ride. If you're looking for something extremely flat and scenic and paved this is the trail for you. Make sure to bring plenty of water and some snacks with you. What's nice is there are bathrooms on the trail¿