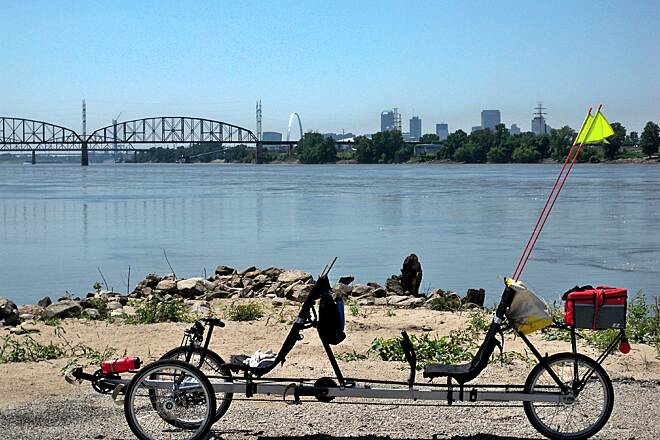 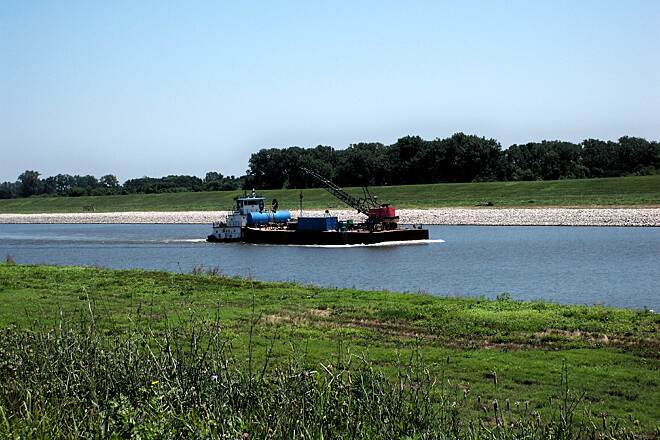 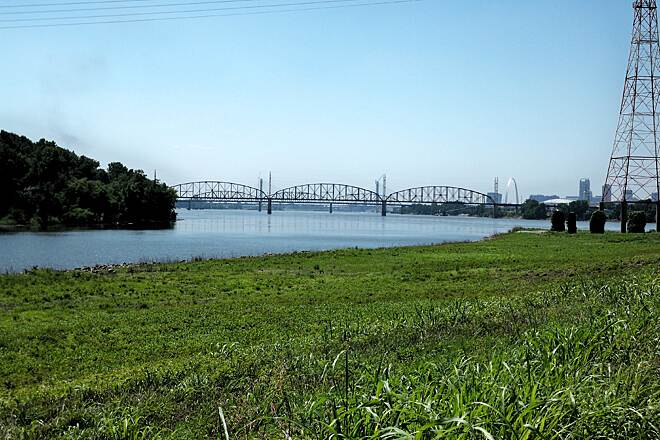 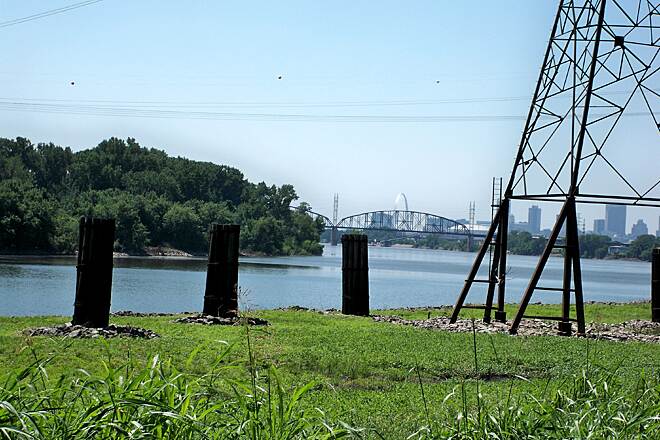 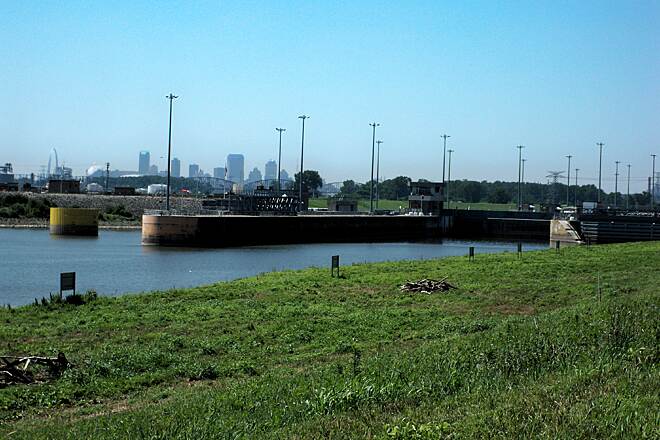 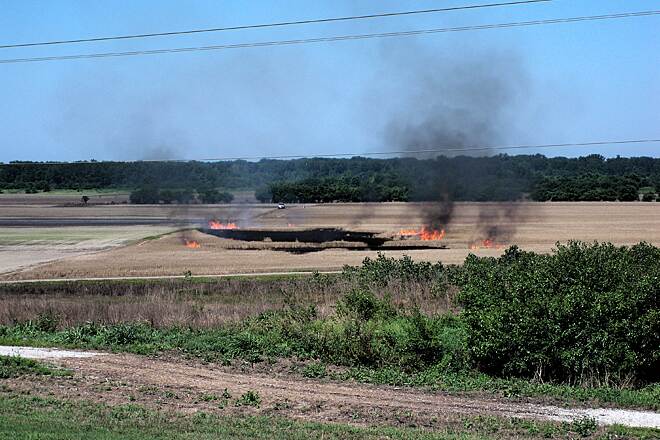 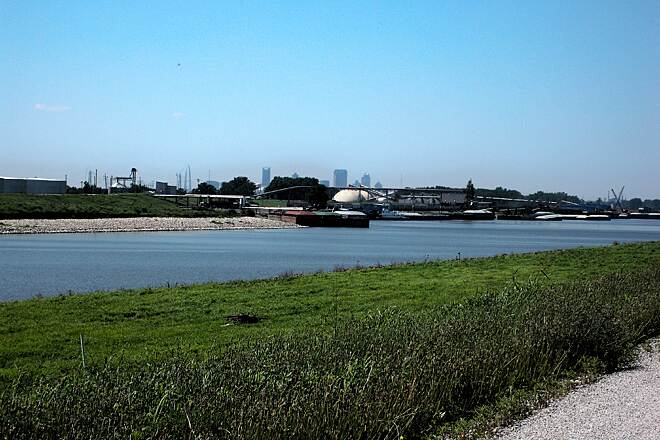 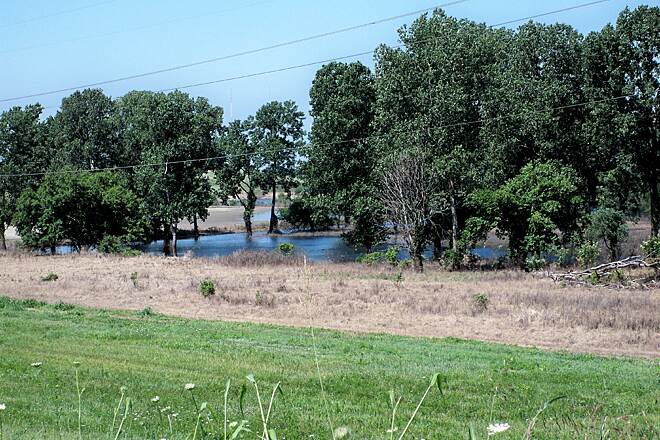 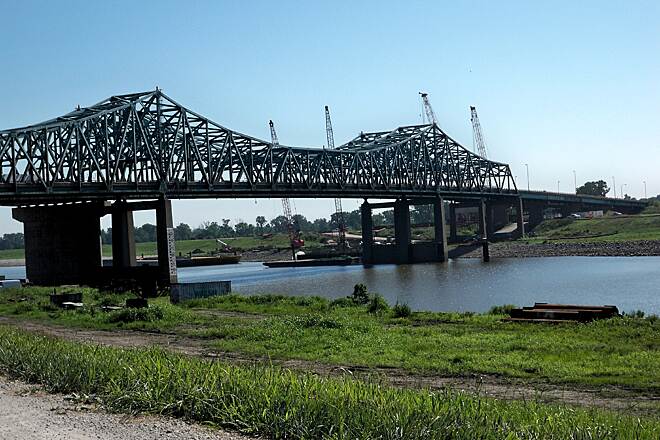 Caution: While construction continues on the new I-270 bridge over the Mississippi River, be alert for trail restrictions or closings north of the parking lot access. The trail will remain open from the parking lot south.

The Eagle Points Trail is located on the Mississippi River's Chouteau Island—a man-made construct from building the Chain of Rocks Canal to carry river traffic around the rock hazards of the Mississippi's main channel to the west. The trail runs entirely along the top of the levee on the west side of the canal and has no crossroads.

But that doesn't mean the trail is boring. There are interpretive signs and plenty to look at along the way. Starting at the parking lot and returning from the northern endpoint, there's the construction of the new I-270 bridges being built to replace the crumbling older ones just to the south. These are the bridges built in 1966 to carry the Route 66 traffic that for years before had used the Old Chain of Rocks Bridge. Just beyond the old I-270 bridges is the Chain of Rocks Canal Bridge, built in 1949 as part of the canal project to carry traffic between the Illinois mainland and the newly formed island. Now it's the only conduit for road traffic on and off Chouteau Island, open only from dawn to dusk.

At any time along the trail, one may encounter barges or other river traffic in the canal. In the long middle section of the trail, there's plenty of time to also look over the vast land expanse to the west. There's farmland, woodlands and waterways. And there's always a chance to see some of the island's abundant wildlife: deer, egrets, herons, and of course its namesake bald eagle.

Approaching the south end of the canal, it widens for a section of barge loading and unloading facilities. Then it's on to Lock #27, the last of the long system of locks and dams on the Upper Mississippi. The trail then descends to near river level at land's end, where there is a great place to rest, view the St. Louis skyline and watch the river.

From I-270, take Exit 3 onto State Route 3 South/Lewis and Clark Boulevard. At the first stoplight, turn right onto Chain of Rocks Road and proceed for 1 mile, over the Chain of Rocks Canal Bridge, to Levee Road on the left. Turn there and follow the road to parking and trail access on the top of the levee.

I took my family here hoping to see an eagle or two. The trail was straight, flat and barren. We rode the trail about half it’s length and seeing nothing we turned around and went back to find a better trail to ride for the day.

Having good neighbors is one thing this trail has going for it. Right down the road to the west is the trail across the Old Chain of Rocks Bridge and the St. Louis Riverfront Trail just beyond. Right back across the Canal Bridge to the east, you can get to the MCT Confluence Trail. And from the southern tip of this levee trail, you can see the McKinley Bridge with its own great Bikeway. So you travel this trail knowing you're surrounded by other great trail adventures past and future. We want to go back and ride this trail in midwinter, when we can see the eagles nesting in the treetops and feeding in the river below.