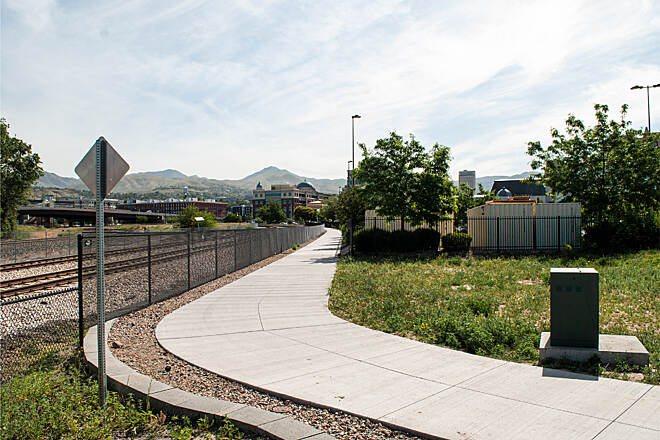 Providing greater connectivity between the neighborhoods and businesses of Salt Lake City, the Folsom Trail connects links west Salt Lake City with the downtown and a transit hub on the east side of the city. Railroads, freeways, and industrial businesses separate Salt Lake City's west side from the rest of the city, making it difficult for residents to walk or bike safely. Now the Folsom Trail offers a multi-use pathway between the east and west sides of Salt Lake City for walking, running, biking, skating, and more. The 1-mile paved trail runs along a former Union Pacific railroad line from 500 West to 1000 West at Folsom Avenue.

At its eastern trailhead, the path ends by the Utah Transit Authority's North Temple FrontRunner and TRAX stations, which provides transportation all across the Wasatch Front. As of 2022 the western end of the trail stops before connecting with Jordan River Parkway, but there are plans to extend the trail to the Jordan River Bridge and build additional east-west connections. To reach the river recreation area that includes the Jordan River Parkway Signs, signs guide trail-users west of 1000 West utilize existing sidewalks and bike lanes on 1000 West, 200 South, and North Temple.

The 10-foot-wide concrete path is well-lit with benches and trash cans along the route. Additional landscaping and tree plantings will help beautify the space along the Folsom Trail in the historically industrial section of the city. There is also the potential to "daylight" the previously buried City Creek that runs parallel to the trail, a project which is currently being assessed.

The Folsom Trail offers residents and recreation enthusiasts a way to safely commute on foot, via bicycle, or by any form of nonmotorized transportation, without having to share the road with cars. The trail is accessible for those using mobility aids and is an smooth route for strollers.