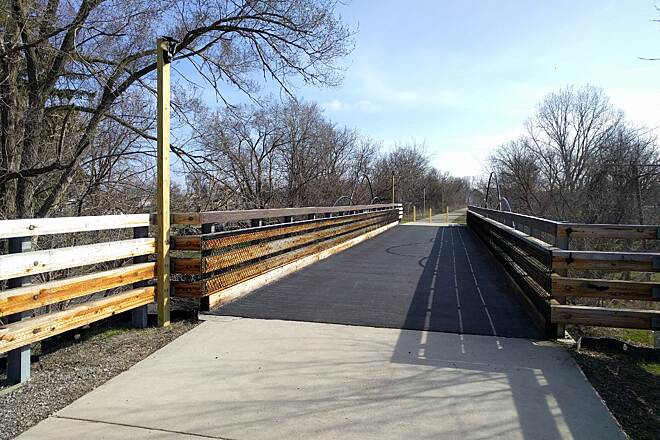 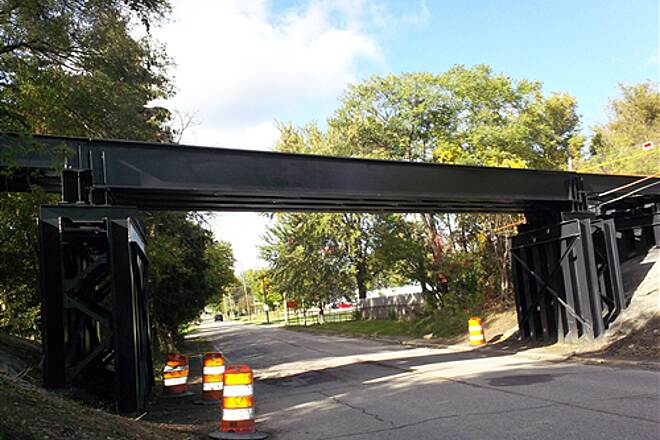 The Genesee Valley Trail is a paved, multi-use pathway that helps to link suburban areas in Flint Township with the downtown core of the city of Flint, giving cyclists and pedestrians a convenient means of commuting in to the city or just getting outside for some quality recreation. The bulk of the trail follows a defunct corridor of the Grand Trunk Western Railroad, which once serviced the factories and industries along the Flint River that propelled the city's growth. Now, the tree-lined corridor provides trail users with a direct and easy path into the city, where you can connect to the backbone of the area's trail network, the Flint River Trail.

The trail begins in the southwest at the Genesee Valley Center mall, and follows the side of the road north until it turns to enter the shaded former railroad route. The trail diverts from the corridor to head north to Corunna Road, where a bridge allows you to safely cross over the interstate highway, and then rejoins the corridor a bit further east down the road. The city has installed plentiful signage to aid at road crossings, but trail users should still exercise plenty of caution as the trail does cross two fairly busy streets on its way into Flint. The eastern end of the trail lies at the recently restored Chevy Commons park, which was transformed from a concrete industrial wasteland into a beautiful riverside green space - the Chevy Commons Trail continues through the park and takes you over the river to the Flint River Trail. A great community resource for non-motorized transportation and exercise, the Genesee Valley Trail provides an excellent example of adapting the area's industrial, auto-centric past into a newer, multi-modal use.

The trail has recently been extended and now continues through Chevy Commons into the city. A very nice trail that goes behind but also hides the urbanized parts of Flint. Very flat and smooth and fairly well maintained.

Rode this trail on inline skates with ease! This is a nice trail that manages to escape the commercial sections of Flint.

I parked at Kettering University which has video surveillance and rode all the way to where the trail currently ends at the Genesee Valley Mall. From Kettering, the trail passes through some residential areas before briefly traveling along the busy Corunna Road stretch. But then the trail makes a turn into a quiet wooded area where it would not seem like a mall is nearby! I saw quite a few people were biking and running the trail including several Crim Fitness groups.

The busy crossings at Court St. and Corunna Rd. both have push-to-cross buttons to stop cars for trail users. The other relatively busy crossings at Ballenger Hwy. and Lennon Rd. have "buffer curbs" so trail users can cross half of the road and safely stand in the middle before crossing the second half.

This trail connects to the Flint River Trail and the ongoing huge MI Iron Belle trail. If you head North East on the Flint River trail, you can get to downtown flint including the University of Michigan and then continue all the way into the Genesee Recreational Area.

This is a nice short walking/biking trail. It is paved with benches along the way. The trail is also pretty friendly, there is even a waste bag dispenser as well as trash cans. There are road crossings along the way so the trail can be broke up into smaller walks. The trail is open from Dawn to dusk.

The Flint River Trail begins near downtown at the University of Michigan-Flint campus and heads north along both sides of the Flint River to Bluebell...

Clocking in at just under a mile long, the Chevy Commons Trail provides a vital connection between the Genesee Valley Trail and the Flint River Trail,...

A short paved trail that runs from the city of Flint's Kellar Park to the newly refurbished Chevy Commons park along the Flint River, the Kettering...

While not the most scenic of trails, the M-21 Non-Motorized Path provides a useful ten-foot wide asphalt path through a suburban stretch of Flint...

The hard surface trail runs from Creasey Bicentennial Park to the Western edge of Grand Blanc Township. Beginning at the park on Grand Blanc Road, the...

This is a dedicated sidepath in Grand Blanc that is suitable for a casual stroll, a quick jog or an easy ride. The trail sits on the north side of...

The Genesse Road Trail sits on the western side of Genessee Road in Grand Blanc. The neighborhood trail extends for just over 3/4-mile, from Perry...

Jewett Trail is both the name of the road, as well as the off-street bike-ped path, circling the Grand Blanc Community High School complex. The...

The Black Creek Nature Trail begins at the Davison Township Municipal Center and winds its way to the trail system in the City of Davison’s Jack...

The George Atkin Jr. Recreational Trail winds along scenic Pine Run Creek in the City of Clio. From a hub downtown at Clio Park, the paved trail...

The Trolley Line Trail, which opened in 2009, runs north from the City of Clio to the Saginaw County line at Willard Road in Vienna Township. It is...