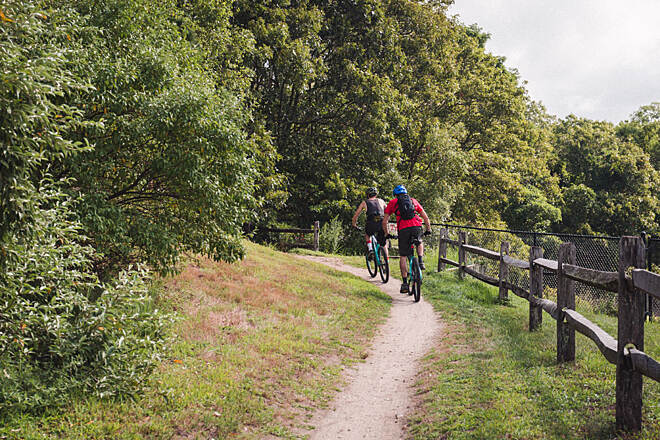 The Glacial Ridge Bike Trail, also known as the Villard-Starbuck Trail, is a paved multi-use trail that takes users through a picturesque stretch of Western Minnesota farmland near Lake Minnewaska. The trail is currently divided into four separate segments (two of which are built on former rail lines), although signed on-road bike routes allow users to complete the entire journey from Starbuck to Villard if they so choose. The Glacial Ridge Bike Trail offers the opportunity to reflect on the area's railroad history as well as it's geological history, passing by numerous lakes formed long ago by the passage of glaciers - or it can simply offer a pleasant chance to enjoy the outdoors in small-town Minnesota.

The eastern trailhead lies in the tiny city of Villard, MN, named after the president of the Northern Pacific railroad at the time the railroad into town was constructed - the charming and historic fuchsia Villard Depot building is situated right at the beginning of the trail. Following the path of that same railroad, the trail heads south and west on a tree-lined stretch adjacent to Villard Lake and then emerges from the trees to cut through a swath of open farmland. Maintaining a gentle grade, the trail crosses over a trio of country roads on its way into the city of Glenwood, where this first six-mile segment ends at 18th Ave. next to the active railroad tracks that still service the small community.

Trail users can then either turn around for a round-trip back to Villard, or head south and west on local roads to make their way into Glenwood, taking 2nd St. to avoid the higher speed State Route 29. Proceeding through Glenwood, a signed bike route guides users along the northern edge of the beautiful Lake Minnewaska. At the lake's northernmost point, another short segment of paved trail enables users to again avoid traversing on the state highway. Carefully crossing the road, the signed on-road bike route continues west on County Route 24 and then south on CR 83 for a little over 4 miles total, before reaching the next segment of trail just past the intersection with T-275. The trail follows the road west until it turns southwest along another stretch of former rail line, following the occasionally tree-lined corridor for around a mile and a half. The segment ends at the state highway, where users can again cross to continue along the scenic N Shore Dr. along the lake and into the city of Starbuck.

The final trail segment begins in Starbuck, right next to the city's Hobo Park & Campground (so named for the preponderance of hobos who camped there after riding the rails during the Great Depression). Traveling south right alongside the city's Main St, the trail passes by another city park with tennis courts and a baseball diamond. The flat sidepath offers gorgeous views of the western end of the lake before emerging once again into an open expanse of rolling hills and farmland. Continuing due south, the trail comes to an end just shy of five miles south of Starbuck at Glacial Lakes State Park, which offers numerous opportunities for additional recreation including fishing, hiking trails, camping, and picnicking.