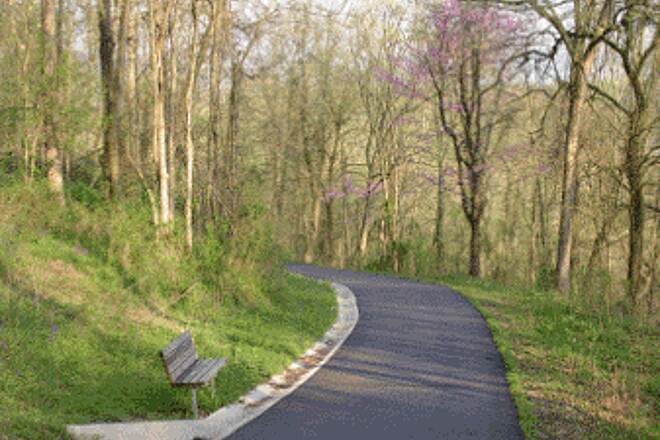 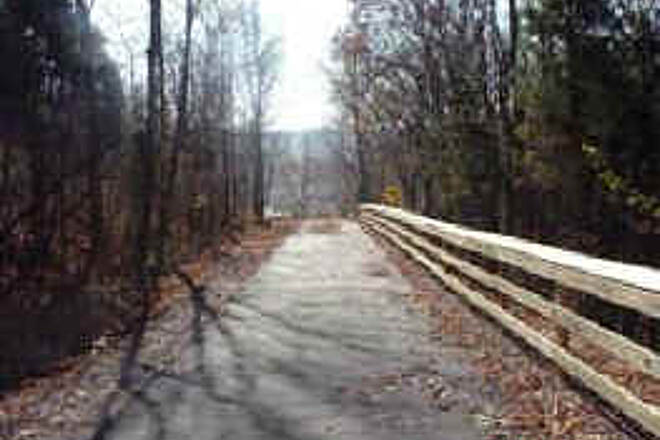 The Heritage Trail of Madison connects the downtown of Madison, Indiana, with its steep hilltop section. Begin your journey at the intersection of Vaughn Drive and Vernon Street along the Ohio River. From there, the trail follows an abandoned Madison, Indianapolis & Lafayette Railroad corridor north through a strand of trees before emerging at the local wastewater treatment plant. The railroad tracks are still in place, and the trail has a natural surface at times with gravel occasionally present.

After passing under Main Street, you have the option to continue up either McIntire Street or the old railroad grade—first crossing an old bridge over Crooked Creek—to reach the switchback portion of the Heritage Trail. Be sure to take a peek north up the corridor from the east side of McIntire Street: known as “the incline” or “the cut,” this part of the old railroad line had the steepest incline of any standard gauge railroad in the country.

Traveling southwest from just north of the bridge over Crooked Creek will lead you via a gravel-surfaced trail to Clifty Hollow Road/State Route 56 near the entrance to Clifty Falls State Park. Continuing northwest instead will take you up the steep hill through dense forest to the historic Madison State Hospital. With a grade of 6% to 10%, this segment is challenging for most users, although the trail is paved from there to its northern terminus.

The Madison State Hospital, which occupies much of the hilltop, is the ultimate destination. Stop to take a breather and gaze in awe at the stunning views of downtown Madison, the Ohio River and rural Kentucky on the opposite shore. The psychiatric hospital, which is still active, is alone worth a trip. Opened in 1910, the innovative facility eschewed physical violence in favor of “moral treatment,” which coupled a beautiful, calming environment with productive work. Most of the Mediterranean-influenced buildings with red tile roofs are still standing today.

Parking for the Heritage Trail of Madison is available at the intersection of Vaughn Drive and Vernon Street in downtown Madison. Farther north, limited parking can be found at the end of McIntire Street. If you choose to start your journey at the top of the hill and travel down the steep incline, park at the Madison State Hospital off N. Outer Road.

We love our Heritage Trail in Madison! Bob Greene does am excellent job keeping it up too! It's one of a few paths that will take you from the hilltop to historic downtown, one of the longest stretches of historic buildings in the US. It is super steep and hard to get back up, but if you're doing some cardio training, it's great. Going up the trail there are about 4 benches to rest on. I can usually get the kids up it using those. It has so many different and fun ways to hike it. You can continue following the railway tracks and go along the river all the way to the Madison-Milton Bridge and back again. You can go down it, then head up the old tracks back to the hilltop or you can also go down it, then head west and hook up with Clifty Falls SP. So many options!

Very nice trail! It has a steep incline so it might be difficult for children, strollers or those not in good shape.

We usually start this trail parked at the State Hospital N Road. We loop around the grounds and then head down the Heritage Trail to the bottom of the hill. You can choose to come up the same way or walk the railroad tracks that also lead to the top of the hill with a diversion onto Hwy 7 for a few feet.

We always see deer, groundhogs, skunks, and all kinds of birds. This is a beautiful trail that we know is worth the drive to get to.