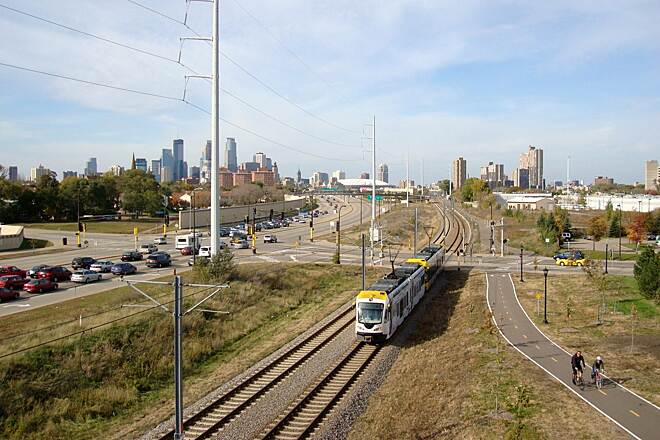 Minnesota’s Hiawatha LRT Trail runs along a north-south route paralleling both Hiawatha Avenue and the Metro Transit Blue Line in Minneapolis. The trail connects downtown Minneapolis and the vibrant Cedar-Riverside neighborhood in the north to Minnehaha Creek, Minnehaha Park, and the former site of the Longfellow Zoological Gardens in the south.

The trail begins just one block north of the site of the former Metrodome (demolished in 2014) at Norm McGrew Place and South Third Street in the Downtown East neighborhood. Bike lanes along South Third Street and South Fourth Street (as well as an extension from Chicago Avenue) allow for a trek deeper into the heart of Minneapolis. Upon completion of the new Vikings stadium, access, lane routes, and area parking may affect this downtown trailhead.

Continuing south from the former Metrodome site, the Hiawatha Trail crosses busy I-35 West on the light rail overpass and under I-94 just north of the large Metro Transit storage and maintenance facility. The trail cuts through a portion of the Cedar-Riverside neighborhood as it continues southward, finally getting into a more residential setting once it crosses Franklin Avenue. At East 24th Street, a bicycle and pedestrian bridge over Hiawatha Avenue/MN 55 carries trail users to the Phillips community of Minneapolis.

Just past East 26th Street, the stunning Martin Olav Sabo Bridge connects the Hiawatha Trail with the popular Midtown Greenway over Hiawatha Avenue. Those wishing to continue south on the Hiawatha Trail should cross to the western side of the road, where the trail surface changes from asphalt to concrete. The section of trail from East 28th Street south to East 32nd Street is little more than a sidewalk; trail users should exercise caution when navigating this section. Fortunately, Minneapolis has targeted this portion of the Hiawatha Trail for improvement in the future.

For most of the rest of its route, the trail is wedged between the light rail line and Hiawatha Avenue. The light rail station and platforms at 38th Street and 46th Street each have Nice Ride bike rental stations. At East 46th Street, trail users cross the tracks and pick up the trail on the western side of the Metro Transit Blue Line as it continues running parallel to MN 55/Hiawatha Avenue.

After just one block, the trail ends at Minnehaha Parkway in the Minnehaha neighborhood, where a short walk, run, or bike along the road leads to the appropriately named Minnehaha Trail.

Both the Hiawatha and West River Parkway Trail link the Minnehaha Park area with the eastern side of downtown Minneapolis. The Hiawatha Trail offers a fast, direct, no-frills pathway alongside high-traffic streets and railroad tracks just south of downtown.

Parking can be found in the southern residential section once E. Minnehaha Pkwy. crosses over Hiawatha Ave. There is also metered street parking along S. Minnehaha Drive at Minnehaha Falls, in addition to a number of parking lots in downtown Minneapolis. Parking is also available along neighborhood streets that intersect with the trail south of Franklin Ave. to the end of the trail.

This is an excellent connector to everything fun and interesting in Minneapolis, including the Minneahaha Falls Park and intersects the Greenway.

This trail makes several key connections possible and safe. For bikers, this trail is faster AND safer than taking the on-street bike lanes. It also intersects the Greenway, providing for even more car-free miles of cycling.

This trail is great for commuting as well as visiting various recreational locations south of Minneapolis.