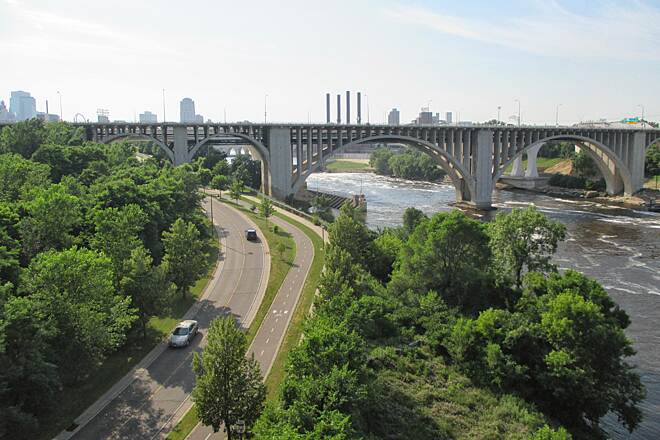 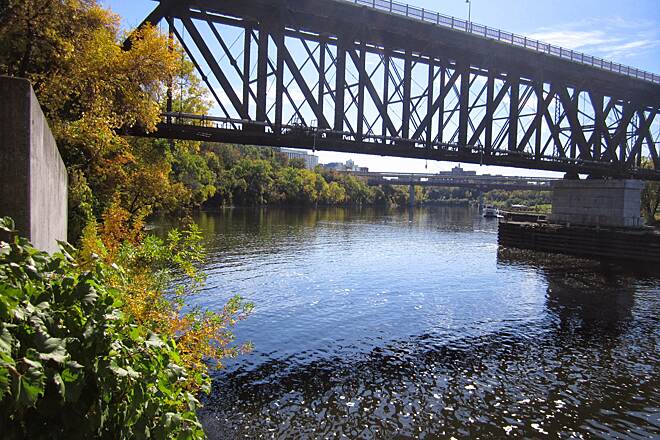 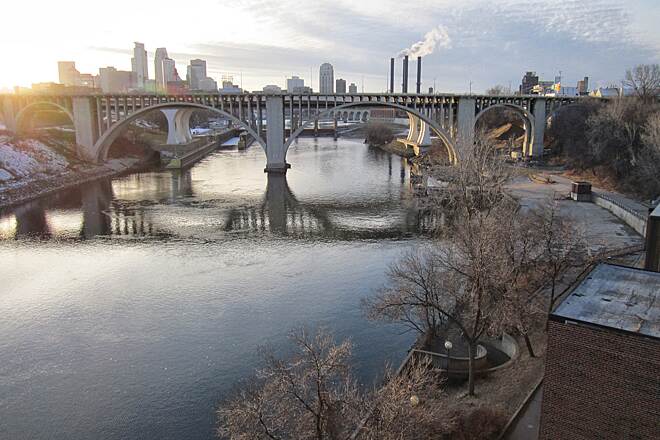 Although only 1 mile long, the Dinkytown Greenway provides an important link in a biking network connecting Minneapolis and Saint Paul. The trail begins near TCF Bank Stadium and runs through the University of Minnesota campus on the east bank of the Mississippi River. On the east side of the stadium, a connection can be made to the University of Minnesota transit, which connects the school’s Minneapolis and Saint Paul campuses.

Part of the Dinkytown Greenway runs through a former railroad trench with the Dinkytown community (after which the trail is named) visible overhead. A pedestrian staircase has been proposed that will connect the greenway trench segment with Dinkytown proper. As the trail heads west, it crosses Bridge No. 9, once used by the Northern Pacific Railway but now open for bicyclists and pedestrians.

The bridge yields quite spectacular views. The view upriver includes a glimpse of St. Anthony Falls and the famed Stone Arch Bridge, while the view to the east overlooks the Bohemian Flats segment of the West River Parkway Trail.

The trail ends on the river’s west bank, where it merges with the West River Parkway Trail and lies within short access to the St. Anthony Falls Heritage Trail. The addition of the Bluff Street bicycle tunnel under I-35W to 13th Avenue South provides a smooth transition to the West River Parkway Trail, the historic Mill District, and other sections of downtown Minneapolis.

If you leave the greenway/parkway along the river, you can cross over the 10th Avenue Bridge and head back over the river to access University Avenue just west of Dinkytown and the University of Minnesota campus.

Parking south of Bridge No. 9 is randomly available along 20th Ave. S., S. First St., and other neighborhood streets in the vicinity. Get to this area by taking I-35W N. to Exit 18. Head southeast on University Ave., and immediately turn right onto 10th Ave. Bridge. In 0.4 mile turn left onto S. 19th Ave. or right onto S. Second St. A parking lot is also on the east side of the West Bank Fields ball diamond at S. First St. and 21st Ave. S.

Good for commute or just for fun

The trail continues under 35w bridge where you can take a right on 13th then a quick left to get on the trail that follows the Mississippi, you can keep following this up the river, or take it over the stone arch bridge. Not much for dedicated trails after you cross over stone arch into marcy Holmes/dinktown area tho.

Any walk where I see three turkeys enjoying breakfast together is a good one. There's also an eclectic collection of items put together on the western end that resembles some kind of art shanty.

The idea was to connect downtown Minneapolis to the University of Minnesota's East Bank via a greenway to avoid traffic and obstacles that are in the way. It is a great idea, but they really failed at that. They couldn't get the railroads to cooperate, so they are using a shared right-of-way with the University. This means that there is constantly a significant amount of maintenance vehicle traffic driving and parking on the trail. In addition, there are a couple places where vehicles regularly cross the trail, and they have huge swaths of gravel covered mess across the trail that nobody seems to take responsibility for cleaning up.
It would be a lot better if there weren't so many cars on the trail, and if whoever is crossing the trail constantly would clean up the gravel mess that they are leaving.

Awesome use of an old railway bed

Love it, air stations, bike shop and emergency phones on this trail