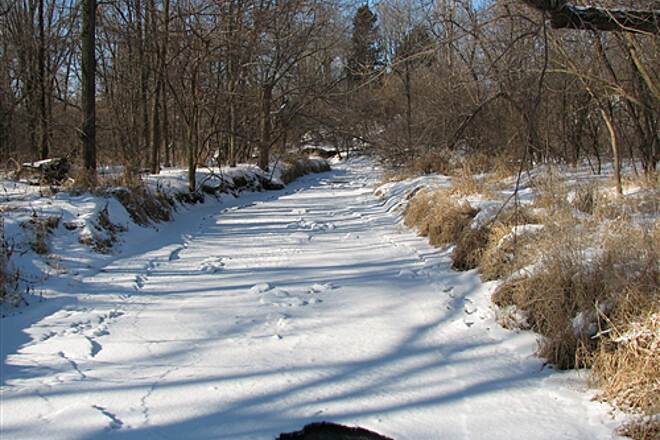 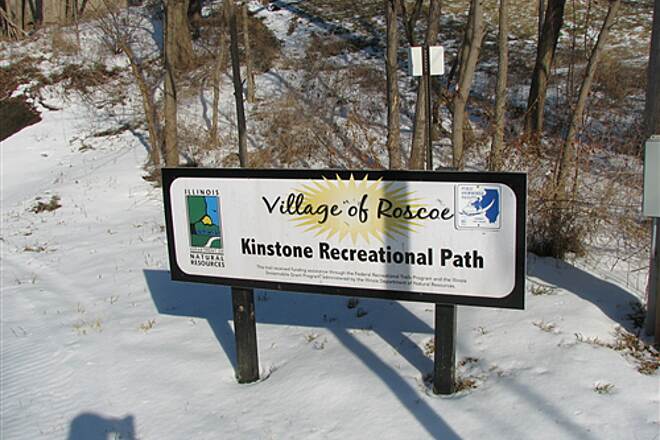 From Main Street and Elevator Road in Roscoe, the scenic Kinstone Recreational Path winds its way northeast through woodlands along the north branch of Kinnikinnick Creek to the Stone Bridge Trail. Alternatively, you can head southwest from Elevator Road and connect to the Hononegah Recreation Path.

Parking is available at Main Street Square (on Williams Drive and Main Street) several blocks south of Elevator Road on the Leland Path. Additionally, parking is available a few blocks south of the Kinstone Path's connection with the Stone Bridge Trail; that lot is located at the Roscoe Township offices off the Stone Bridge Trail where it crosses Elevator Road.

Side trail that leads to others

It seems to me this should have been called the Hononegah Trail given it passes through the forest preserve and etches the road with the same name. Anyways, the far east part of this path stems off of the Old Bridge Trail which is a great place to bike. When you come off that trail and onto the Kinstone, you go through a small forested area before heading up a hill that starts you along Hononegah Rd. The trail is asphalt/cement and is in pretty good shape. As mentioned, it goes through the front section of the Hononegah FP where they have a bathroom, picnic tables and a water pump all near the trail. The trail ends just east of downtown Rockton but another path picks up that takes you past the Rock River and the downtown area.
There aren't many bells and whistles along this short path but it is a nice continuation to other trails in the area.

The Kinstone is a connecting trail between Stone Bridge and the Hononegah Rec Path. As such, we use it to avoid contending with traffic on Elevator Road. It is a rather nice, winding, scenic trail through woods and along a creek. Although we've never ridden it after dark, there appear to be some very nice old-fashioned streetlights along the way. However, as recreational bikers, we find the Kinstone lacking in two areas. One is length - it is really short, but again, taken as a mere connector trail, that's not so bad. The surface, though, is loose gravel and very rough and bumpy. Difficult for bikers as we find the wheels slide around way too easily. I really am mystified as to why so much expense was used for fancy streetlights and not, instead, invested in a better surface. Perhaps there are plans to improve this path in the future? I hope so.

This is basically a scenic connector trail between the Hononegah Recreational Path and the Stone Bridge Trail. It also connects to the Leland Path at Elevator Road and Main Street. It is short but runs along the creek the whole way, and is contained inside a band of hardwoods.

Wilma and I walked it as part of a loop that included the Stone Bridge Trail, the Leland Path, a short section of the Hononegah path, and the Kinstone path. I posted some pictures and video on my blog. http://ilbob.blogspot.com/2012/01/stone-bridge-trail-leland-path-kinstone.html We had a very nice walk on this path. I am pretty sure we will be back some time.