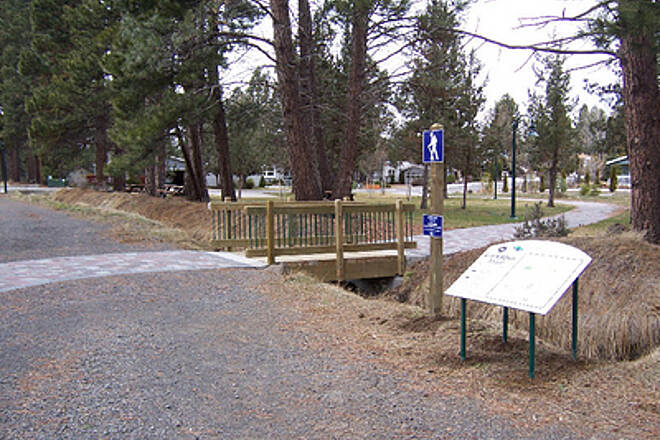 The northern half of the trail, which is paved, begins in Stover Park (1650 NE Watson Drive), a popular community spot with a baseball field, playground, drinking fountain, and restrooms.

Continuing south through tree-lined neighborhoods, you’ll soon have the opportunity to take a short spur west to Hollinshead Park, which is worth a stop. The park was formerly a working ranch and features several historic farm buildings, a museum, and a community garden.

South of the park, the trail loops around Pilot Butte Scenic Viewpoint. Take a trail to the summit of an old cinder cone for a spectacular view of the city, the high desert, and the Cascade Mountains.

South of Pilot Butte, you’ll traverse Pinewood Natural Area on a gravel portion of the trail. Shortly therefore, the trail ends in Larkspur Park. Much of the park serves as a nature preserve, but other areas are developed, including a picnic shelter, the city’s largest playground, restrooms, and places to play horseshoes, bocce, and basketball.