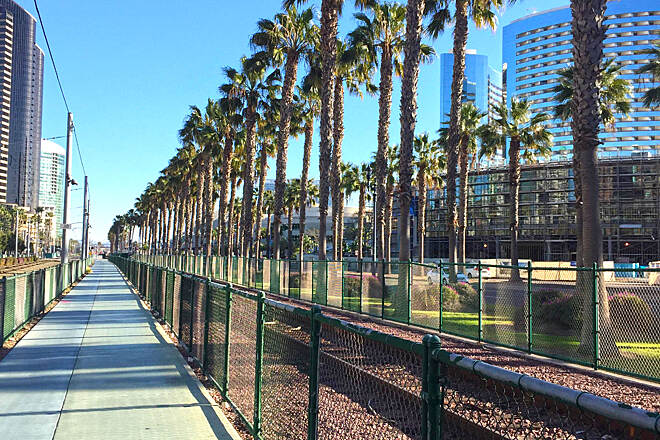 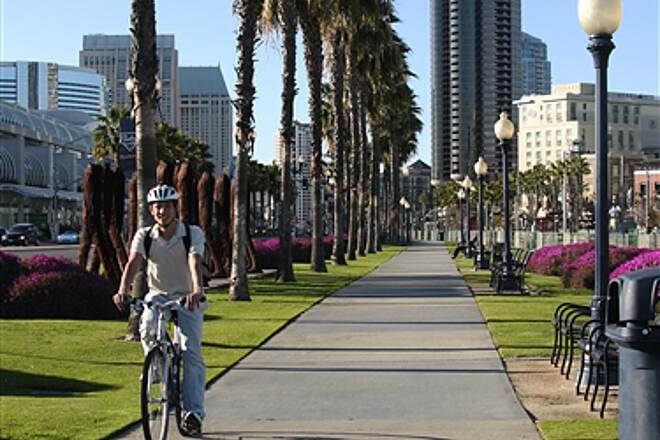 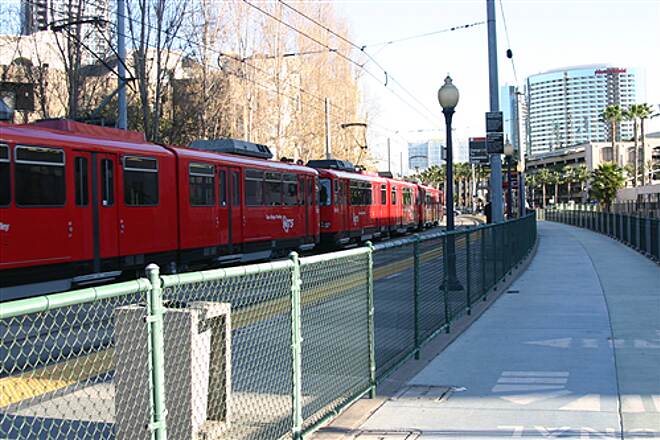 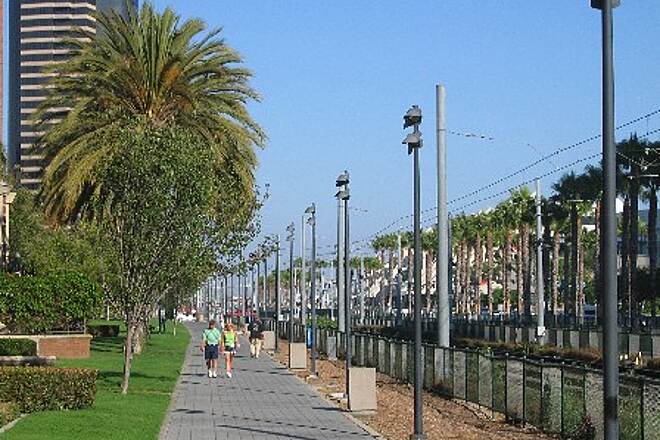 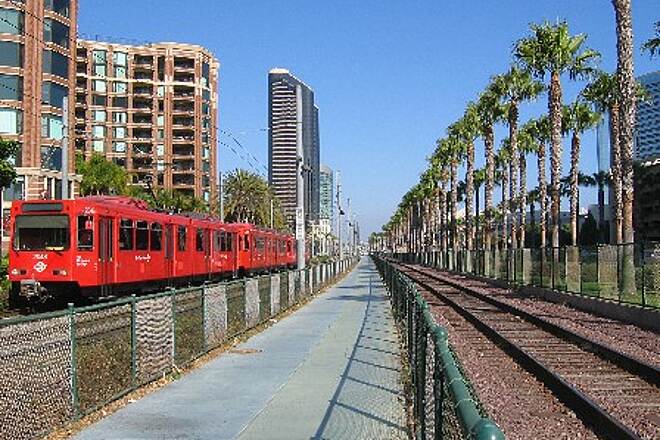 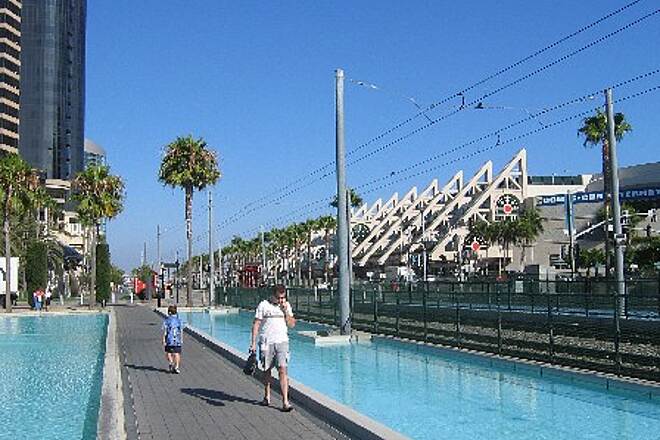 Running through downtown San Diego, Linear Park is a vibrant, palm-lined ribbon that parallels an active trolley line along Harbor Drive. The trail provides direct access to many of the city's highlights, and its rich supply of public art, grassy areas, water fountains and people-watching opportunities makes the promenade a San Diego highlight in itself.

You'll want to start on the northern end of the trail, where there is ample parking in a lot on West Broadway across the street from the Santa Fe Depot (Union Station). Built in 1915 in the classic Spanish mission and Colonial Revival style, the depot is a terminus of the popular Coaster commuter route. Once at risk of being torn down and now widely celebrated, the historic depot is worth a visit before heading out on the trail. Listed in the National Register of Historic Places, the depot also houses the library of the San Diego Railroad Museum.

The trail begins just west of the active railroad tracks. Head south for an eighth of a mile, and follow the trail as it becomes a wide path weaving between two apartment buildings. After passing the buildings, turn left onto G Street, cross Kettner Boulevard and reconnect with the off-street path on the south side of the street. The wide variety of sights to take in along the trail makes it ideal for a leisurely bike ride or stroll.

Just past Kettner Boulevard, a stand of San Diego's tall towers flanks the north side of the trail, opposite the San Diego Convention Center. At the 5th Avenue intersection, make a left to the entrance to the Gaslamp Quarter, with its seemingly endless offering of restaurants, shops, bars and historical charm. The Gaslamp, which contains more than 90 Victorian-era historic buildings, was revitalized in the 1980s and 1990s. Today it is a major San Diego destination for tourists and locals alike.

Also nearby is Petco Park, home of the San Diego Padres of Major League Baseball. The trail ends at the intersection of Park Boulevard and Harbor Drive. Cross the train tracks at 5th Avenue to check out the Martin Luther King, Jr. Promenade, which links a number of other sights in this part of San Diego on the north side of the railroad corridor.

"WE often do this trail, starting at Spanish Landing on Harbor Drive (great free parking) and continuing mostly along the waterfront, passing the Star of India and Seaport Landing. Very easy with lots to see and do! We sometimes continue south beyond Petco Park, linking up with the bike trail that goes on along SDBay to Imperial Beach and the Silver Strand and then north to Coronado, where we grab a ferry back to San Diego."

In The Heart of San Diego

"The Martin Luther King, Jr. Promenade consists of two separate trails. One is a bikeway constructed between the San Diego Trolley Line right-of-way and an active freight train route, and the other is a pedestrian walkway just north of the trolley line.

If you’re visiting downtown San Diego, the trail is located near Petco Park and the Convention Center. It’s literally a hop, skip, and a jump from many major hotels in the downtown area.

The route is totally flat and well suited for any non-motorized trail activity except horseback riding. As an added bonus for those who might be tied up with business during daylight hour, the trail is artificially illuminated in the evening.

Please feel free to e-mail if you want additional information.
"