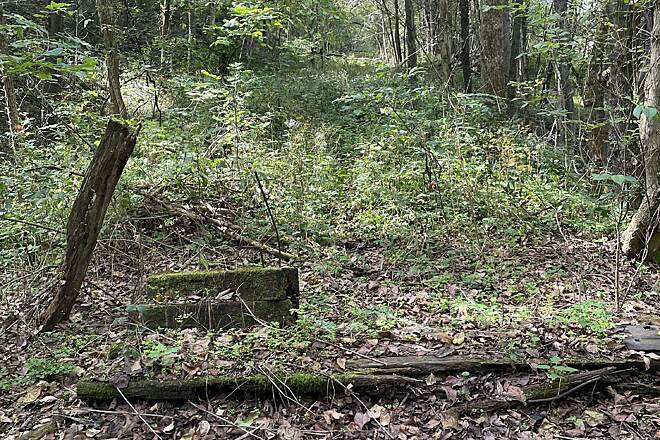 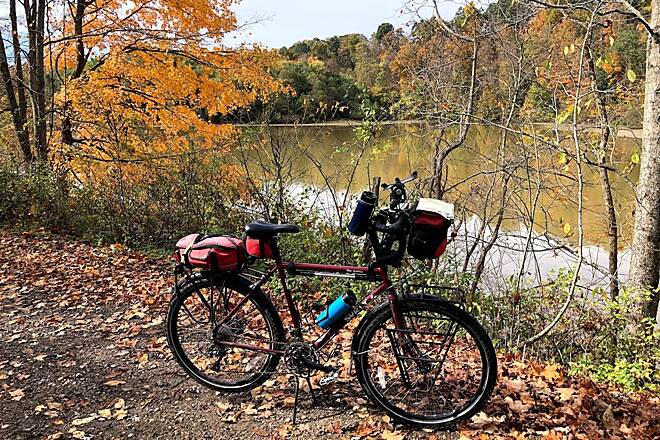 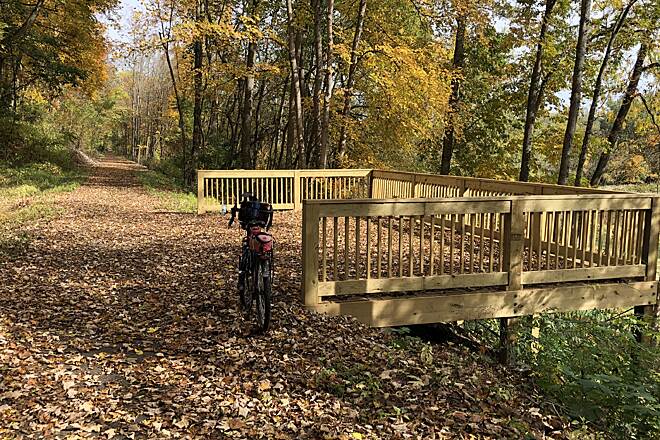 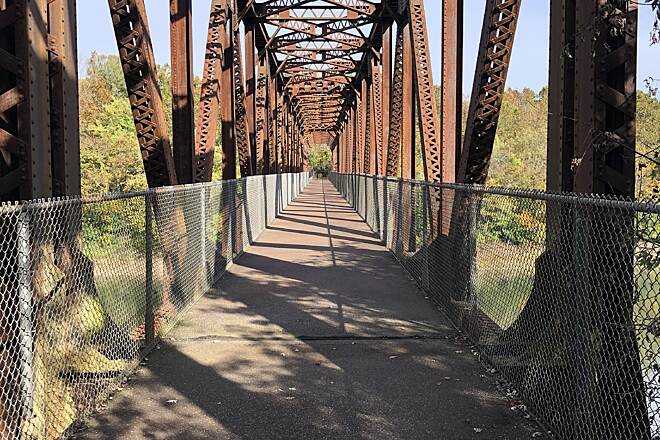 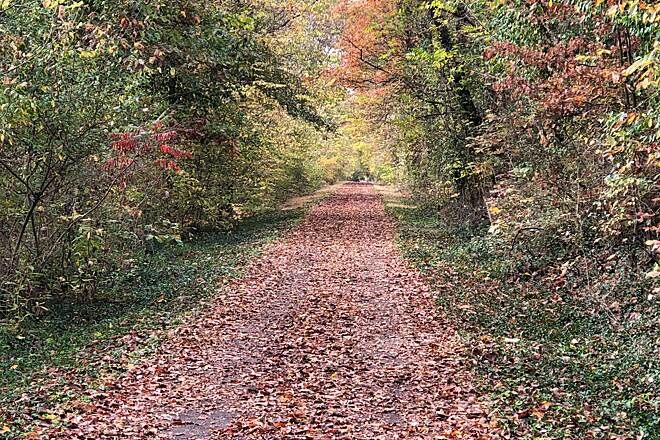 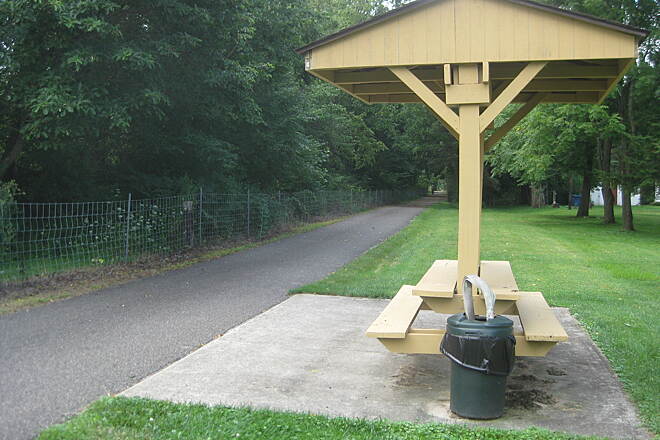 The Muskingum Recreation Trail runs for 4.5 miles along a ballast trail between Main Street in Dresden and Rock Cut Road. The trail offers views of the Muskingum River, with impressive rock formations, through a wooded corridor.

Another 0.5-mile section is open between Ellis Dam Road and the river, which includes impressive views of the trestle. There are plans to link the two segments.

An Unfinished Trail That Has Potential

I rode an out-and-back ride on the Muskingum Recreational Trail starting in Dresden, Ohio. You head south out of Dresden and ride along the West bank of the Muskingum River. In a few spots, the edge of the trail drops precipitously to the river below. Fortunately, most spots with the high steep banks have a fence in place to prevent you from sliding into the river. As you head further south the trail moves away from the river for a while until you reach the current southern end of the trail where you cross over the Muskingum River on a spectacular rail bridge about 30 to 40 above the surface of the water below. TrailLink.com lists this trail as two separate segments but I was able to ride through the undeveloped middle section.

While the recognized trail segments are paved, the middle section has an ash and cinder surface from the old rail bed that this trail is built upon. Parts of this undeveloped section, however, have been resurfaced with limestone gravel that has been rolled and packed. Orange construction ribbons that have been tied to the ends of some of the branches in this area seem to indicate that there will be additional paving to this section sometime in the future. I did find the the going in this undeveloped section particularly slow.

This is a beautiful trail, but I was surprised that I had the trail entirely to myself, except for the one fellow on a lawn mower who was blowing leaves off of the trail. Being able to see the trail surface throughout my return trip was much appreciated as I was able to avoid a few of the bumps and dips in the trail surface that had previously hidden by a blanket of fallen fall leaves.

I'd think that should the Muskingum County Commissioners and the citizens of the county decide to finish the Muskingum Recreational Trail and then connect it with the Zane's Landing Trail running North out of Zanesville you'd create a beautiful destination trail for this region of Ohio.

A bit run down and no restrooms at either terminus

The trail looks like it has seen better days, and has not been getting frequent maintenance. Many tree roots caused damage to the asphalt resulting in plenty of bumps along the way. A tree had fallen and was cleared but the wire fence it hit wasn't repaired, and it appears to have happened months ago, or even late last year. Another tree was still down across the trail, but it was high enough to ride or walk under. The views of the river were sparse and even when the trail was close there weren't any views worth noting. There was parking at either end, despite the TrailLink map not indicating that.

This was our first trip on this trail. We found signage in the town of Dresden to be confusing. We finally found parking and hopped on the trail. The trail is tree lined which keeps you out of the sun. It also left the trail littered with tree debris, including some small trees lying on the trail. The trail does not seem to be heavily used. We encountered only two other cyclists. You can glimpse the Muskingum river through the trees. It's quiet and serene. I would have appreciated restrooms at the end of the 4 mile ride, but there weren't any. Still, we will be returning to this nice little trail.

The Muskingum Recreational Trail is paved asphalt along the four mile section from Rock Cut Road to Dresden. There is also a parking lot in Dresden with nice signs directing you to it. You can add three miles to the trail by riding through Dresden and back. It is a lovely little town with little traffic and nice wide roads. The Depot Smokehouse is a great place for lunch or supper.

The trail itself is very pretty although short. There are a few rock walls, some views of the Muskingum river, and lots of farmland in the Valley. We were told that there had been plan to extend the trail to meet up with the Dam section, but the man who owned the land refused to let the bike path cross. Too bad - would have been even better.