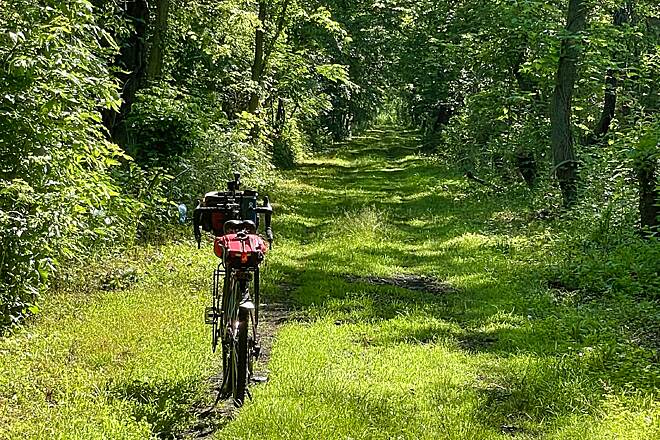 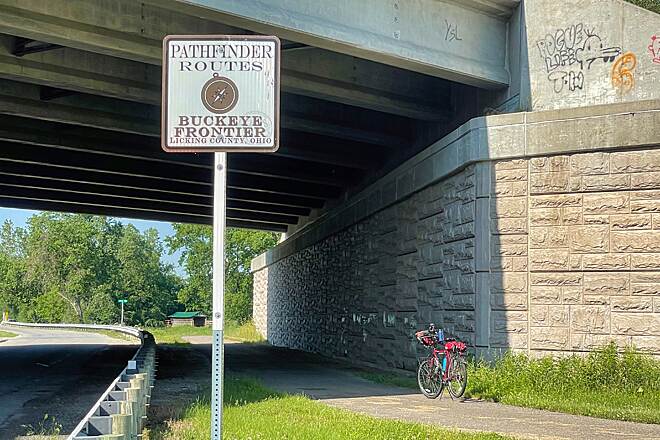 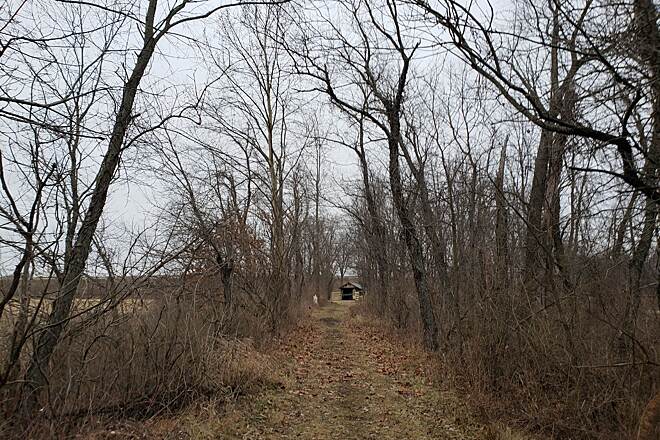 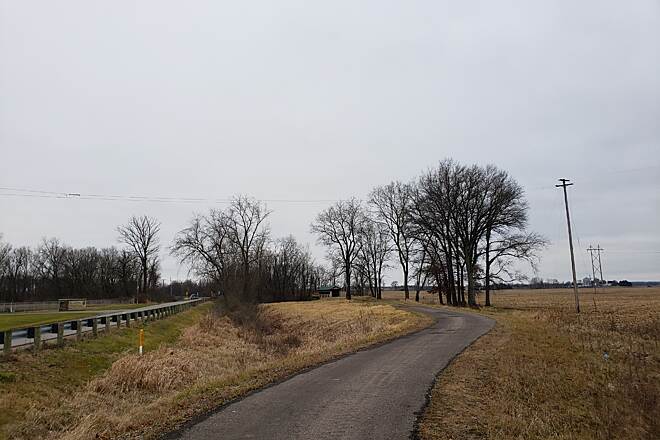 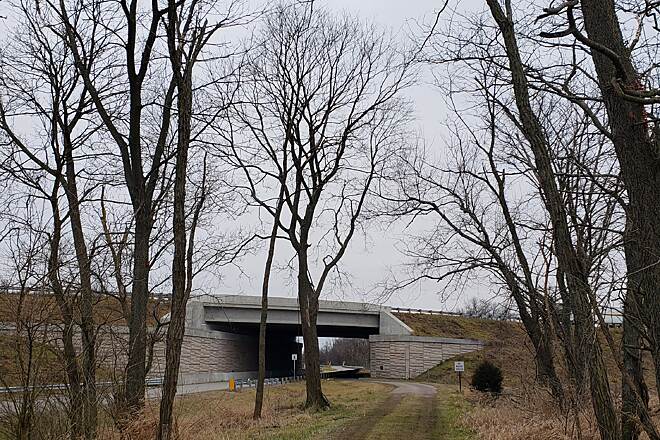 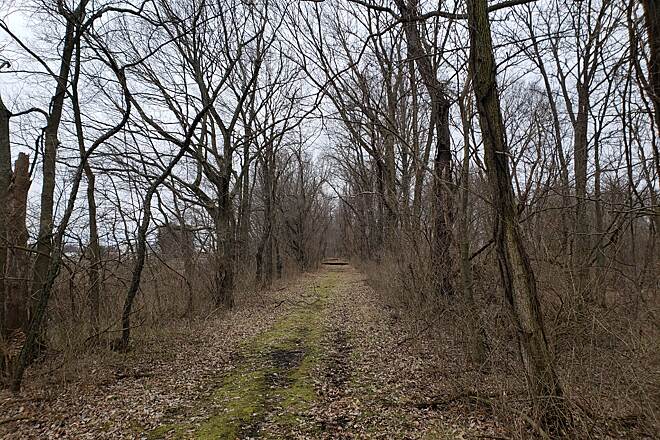 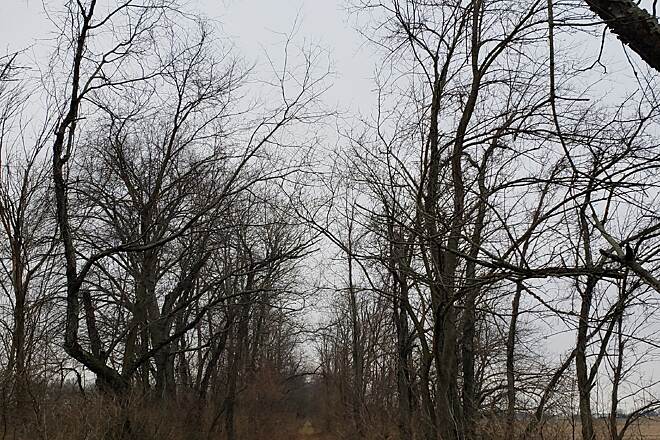 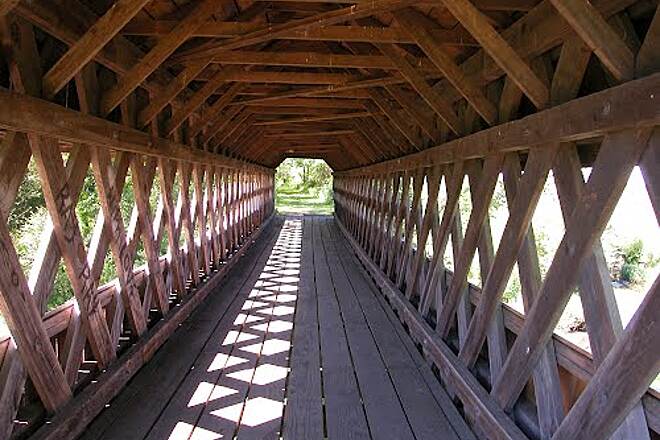 The Ohio Canal Greenway extends south from Hebron on an old Penn Central Railroad right-of-way. Farm fields border the trail on the west, while remnants of the historic Ohio and Erie Canal are to the east.

Birdwatchers and other fans of wildlife will want to stop in at the Hebron State Fish Hatchery just south of Interstate 70 along the trail's route. A wooden-truss covered bridge built in 1992 spans an irrigation ditch across Canal Road from the facility. Here a larger adjacent waterway begins, continuing south along the trail until its end at State Route 79.

Parking for the Ohio Canal Greenway is available in Hebron at Canal Park on Canal Road. Farther south, parking can be found at the Hebron State Fish Hatchery on Canal Road under I-70.

Not Up to the Standards of Other Licking County Trails

To celebrate Flag Day I rode 5.5 miles on an out-and-back ride on the Ohio Canal Greenway starting in Canal Park in Hebron, Ohio. Compared to the other Licking County trails I rode last Fall, this trail definitely was the roughest one I have ridden. The surface varies from concrete coming out of Canal Park to grass and dirt soon thereafter. Here, it reminded me in some ways of the Towpath Trail along the C&O Canal Trail in Maryland. However, south of Interstate 70 the surface changed from mostly grass and dirt to mostly gravel and grass. The gravel was more like ballast stones you would find underneath railroad tracks — about the size of ping pong balls.

I was disappointed in this trail, as the other Licking County trails l've ridden were paved and well maintained. Maybe this trail is still in its initial stages and not fully developed. It has potential. It is mostly shaded, and has a few interesting sites. It has a small covered bridge over a creek as the trail passes by the State of Ohio’s Fish Hatchery. The end of the trail south of Interstate 70 parallels parts of what remains of the Ohio Canal. The trail ends near Top Cat Concrete on Walnut Road (OH-79). Walnut Road is also the county line between Ohio's Licking and Fairfield counties.
The remnants of the Ohio canal continue south toward Buckeye Lake. I think that Fairfield County should consider extending this trail from its current Walnut Road end to the northern shore of Buckeye Lake which would certainly give this trail more utility.

At present, I would not recommend this trail for biking unless you were riding a mountain or fat-tired bike. It definitely is not for narrow tired street bikes. At best, for right now, I'd leave it for pedestrians to hike.

Nice, flat grass covered path. We parked at Canal Park ( porta potty and picnic area) then headed south. Walked the 1.9 miles to the covered bridge then headed back. We had our dog with us and are finding a lot of ticks on her and the kids. Really enjoyed- just check yourself after the trail.

My husband and I enjoy this trail quite a bit. It’s flat, and for the most part you feel pretty secluded even though you are quite close to the road. As another reviewer mentioned there is quite a bit of dog poop on the south end of trail, so watch your step.

My wife and I took this trail on recently. It is definitely rustic compared to the asphalted bikeways we are used to. Not being paved it has its share of tree roots and adventure navigating the path. Thus, I would call it a “real” trail in the same vein that I would call the old cinder high school tracks “real” tracks! Give it a shot. Very enjoyable!

This trail description was accurate. It's relatively flat and 90% is either grass or a mixture of grass and cinder. The covered bridge is a nice feature. I'm a canal buff, so I enjoyed riding next to the canal and stopping at the spillway. The trail is well maintained, yet very natural. Park at Canal Park.