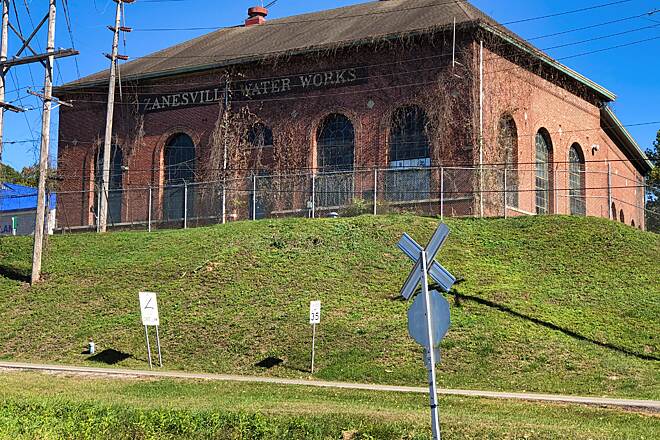 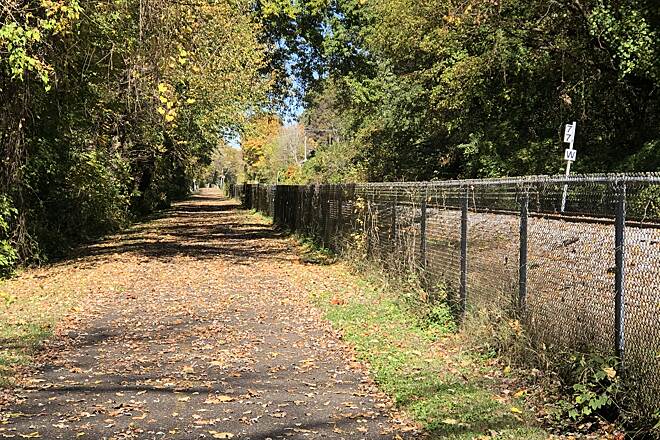 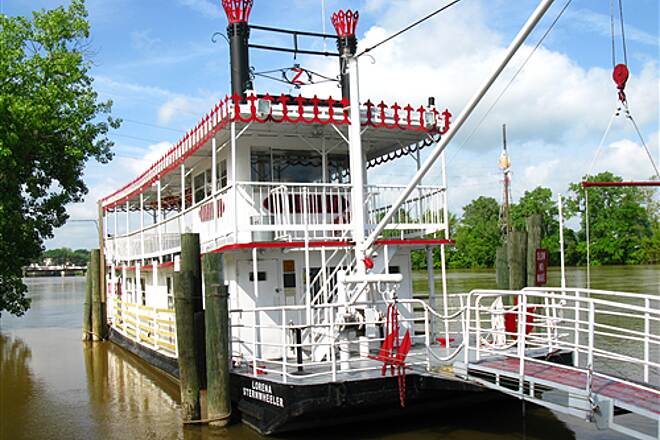 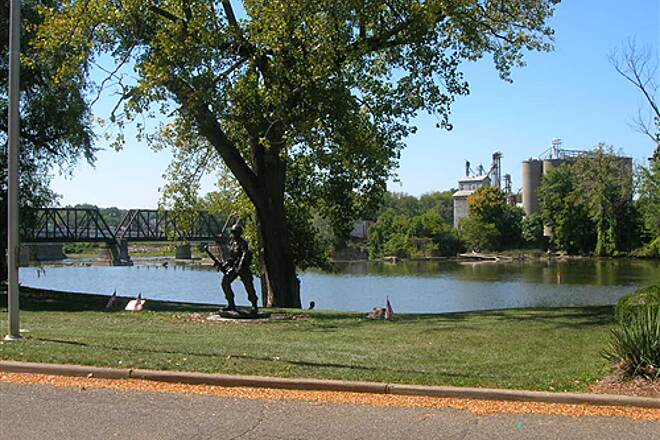 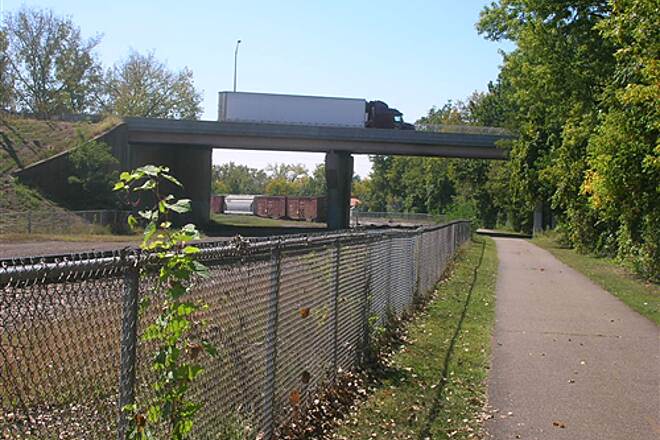 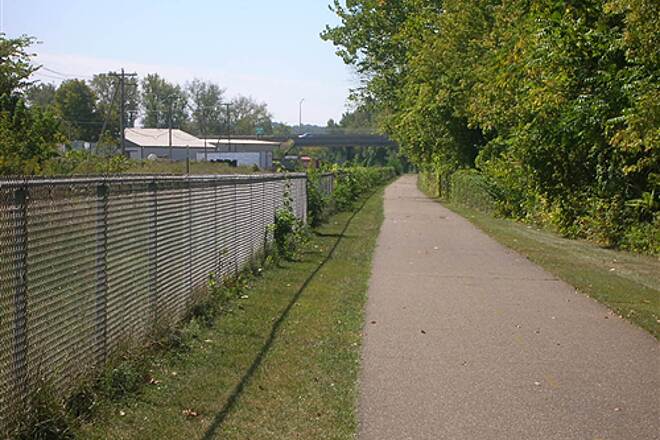 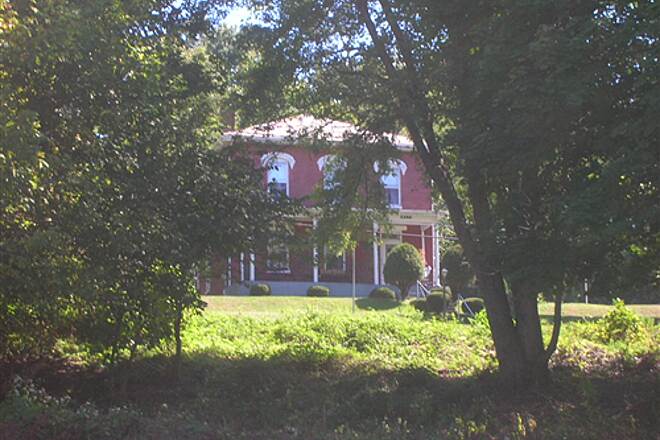 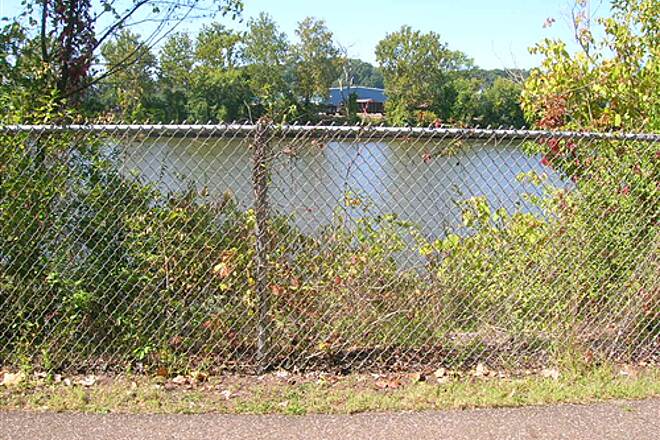 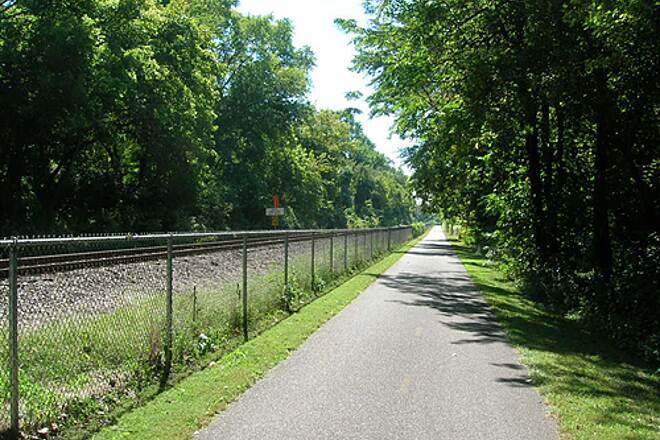 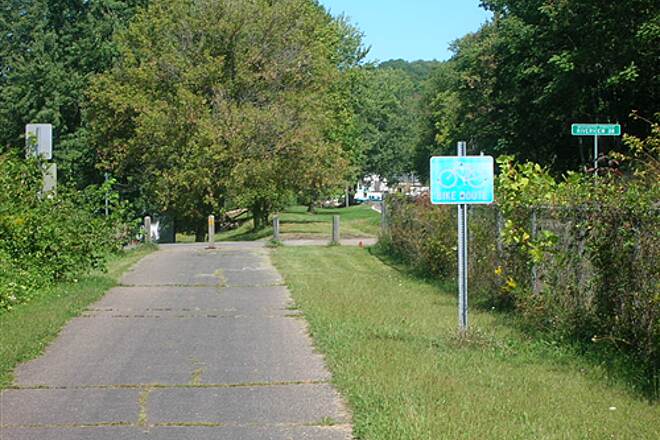 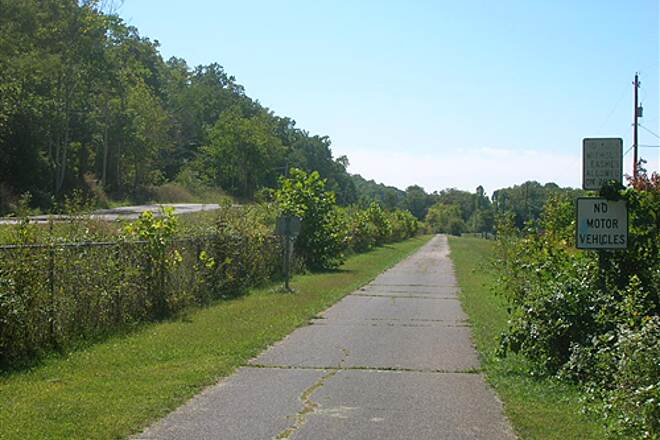 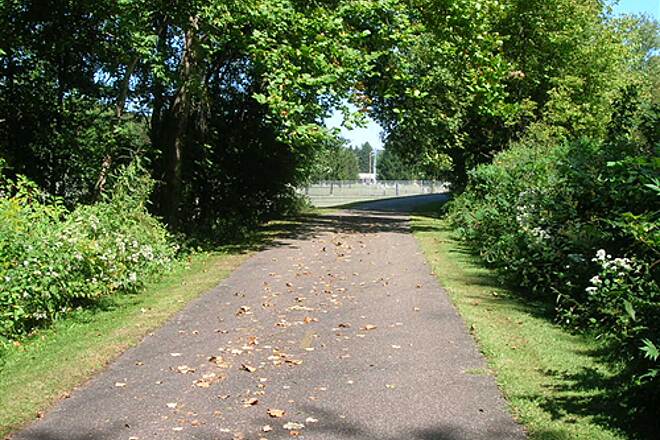 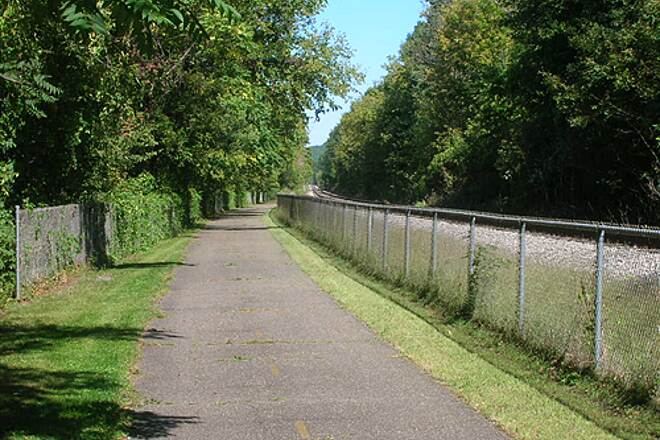 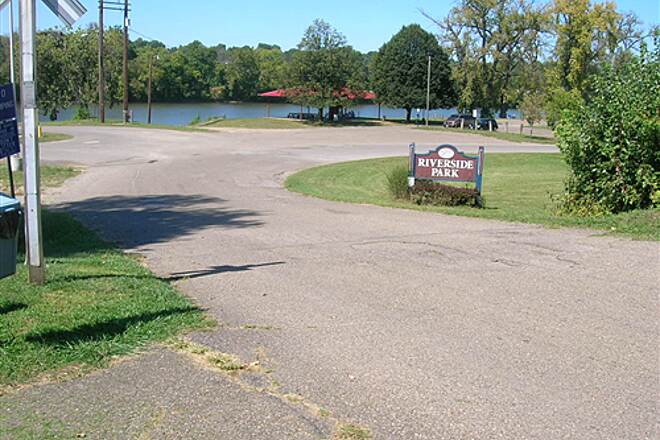 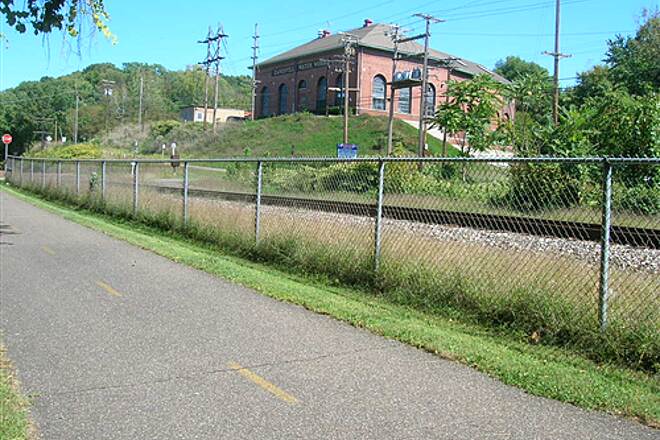 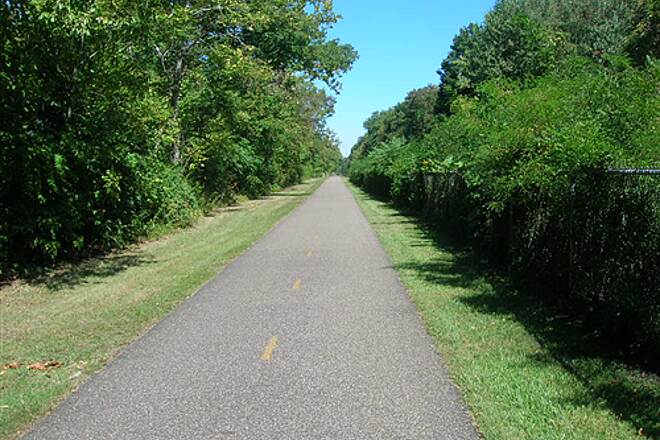 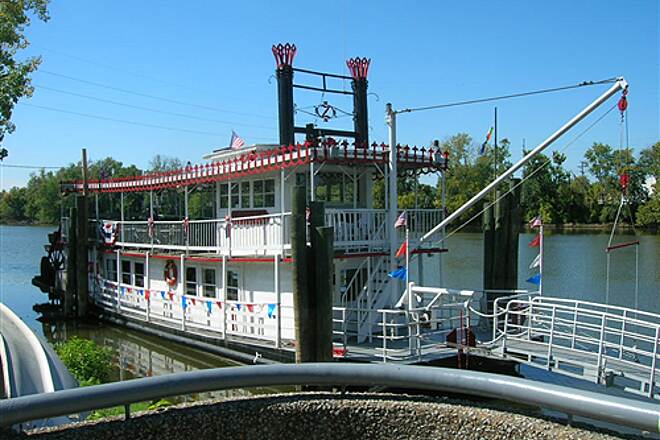 In downtown Zanesville, the paved trail lies near the docking port of the Lorena, a sternwheeler that navigates the Muskingum River, as well as a restored trail depot and the unique Y-Bridge just three blocks away.

Parking and trail access can be found in Riverside Park along State Route 666 and in Zane’s Landing Park on Market Street.

This rail trail starts at Zane's Landing Park on the East Bank of the Muskingum River just north of the city of Zanesville's Y Bridge in downtown. Its main purpose seems to be to connect the city's youth athletic fields with downtown Zanesville. The trail parallels the river bank and heads north toward Jaycee Riverside Park and ends at Washington Street in Washington Township. The trail is flat and paved. The surface from Zane's Landing to the boat launch in Riverside Park is smooth and fairly new. The rest of the trail north of the boat launch is bumpy and jarring as there are a lot of cracks within the pavement. Hopefully this section that parallels most of the athletic fields in Riverside Park will be resurfaced next year. I was the lone cyclist on the trail on this Fall Tuesday afternoon, however, I encountered perhaps a dozen pedestrians out walking on the trail during my ride. I'd be curious to see how busy the trail becomes in the evenings or on Saturday afternoons when there are numerous youth soccer or baseball games going on in Riverside Park.

I'd like to add that should the Muskingum County Commissioners and the citizens of the county decide to connect the Zane's Landing Trail with the Muskingum Recreational Trail running south out of Dresden you'd develop a beautiful regional destination trail.

We ride it three days a week, but it needs some love!

The ZL Trail is 5.6 miles if you go to the end and back, so we usually ride it twice. It's pretty bumpy from tree roots, and it REALLY needs to be resurfaced. We've been riding on it 20 + years now, and though it's very pretty and shaded in places, it needs some work on its asphalt base. Regarding the fencing--we were there when a company replaced part of the fencing with entrances to the path from the sides.

Was in the area.

Saw this trail on traiillink. Wife and I ran it from start to finish and back. Very nice trail to run of bike. There is shade and some open sunny spots. Very short for biking but great for walk or run.

We parked north of the Lorena across from the water plant. We then road south past the Lorena (Sunday and little traffic) on to West Main and on to the Y bridge. I am originally from that area so we did not ride across , instead we turned in to the canal parking area and proceeded to ride to the RxR bridge. After that we got back on the path and rode to the North end where the path ends. We rode through the park on are way back to our vehicle. We ended up with 8 miles and it was a pleasant ride on our recumbents.

The Zane's Landing Trail is a nice and level ride from the dock of the sternwheeler Lorena on the eastern side of the Muskingum River in downtown Zanesville north between the river and the Ohio Central railroad tracks to Riverview Drive near Riverside Park. Parking at the southern end is paved and plentiful and is found near the trailhead at 39-56.634N and 082-00.602W. There is also parking in Riverside Park just a bit south of the northern terminus at 39-58.565N and 081-59.040W. The entire 2.9-mile trail is paved and relatively smooth enough for road bikes. I consider this only a "fair" trail due to the short length, lack of shade, and mediocre riverside scenery.

However, I would encourage riders to park near the Lorena mooring and, after riding the 5.8-mile round trip, leave your car where it's at, and continue south one more block to Zanesville's historic Y-Bridge that was originally built in 1902 over the confluence of the Muskingum and Rocky Fork Rivers. The center of the bridge can be found at 39-56.420N and 082-00.862W. The view looking south along the Muskingum River is quite scenic. Looking north, one can see beyond a railroad bridge to the Lorena in her mooring.

If you would like to see more of the Muskingum River scenery, drive north along OH-666 into Dresden and ride the Muskingum Recreational Trail. Parking is in a private lot (that the owner has approved) near the northern trailhead at 40-06.552N and 082-00.707W. From there you can ride 4.0 miles south and southeast along the western side of the river to the southern terminus at 40-04.129N and 081-58.623W for an 8-mile round trip. This trail is 100% shaded the entire distance as it meanders through the woods. There is parking at the southern terminus although it is really in the middle of nowhere. Parking at the northern end is in the jurisdiction of Dresden Police and appears to be the better choice. Because this trail runs entirely through the woods there are numerous surface irregularities that are fun for mountain bikers but that might annoy road bikers.

This is a heavily used trail by bikers and walkers. It is well maintained, and kept clear during winter months. Several caches are placed along this trail in and near Riverside park, and plans to place more along its route this year.

Zane's Landing bike trail runs from downtown Zanesville to a large recreation area a couple miles north of town (Riverside park). The trail itself is paved, and parallels an active railroad line for its entire length. The trail also parallels the Muskingum river, but because the river is hidden behind thick vegetation, you don't get a good view of the river.

The trail is nice enough, but not very long (2.9 miles, according to this website). I look forward to a time in the far future when it is linked to the Muskingum Recreation Trail, further to the north.

"You have a view of the Muskingum River on this all flat, all concrete trail. The end of the trail is often muddy/dusty/icy from runoff from a bank, for about 50 feet. One water fountain, restrooms, ballparks on the way, and parking at 3 different points. Wildlife--deer, squirrel, and bees. Honeysuckle smell in summer."