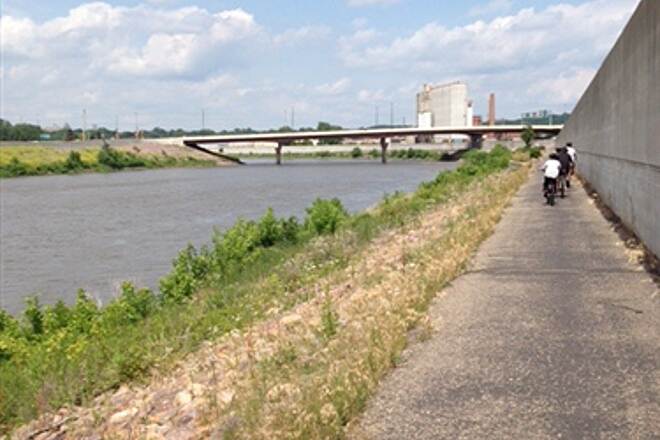 View Trail Map Send to App
The paved North Minnesota River Trail hugs its namesake river for much of its journey on the western end of Mankato. Along the way, it offers views of the river, limestone cliffs and the city. From its southern end, you can access popular Sibley Park, where you can enjoy a variety of recreational opportunities, including softball, tennis, fishing, picnicking and even a farm.

About mid-trail, is Riverfront Park, which offers parking lots off W. Elm Street and W. Rock Street. A spur off the trail's southern end leads to Sibley Park (900 Mound Avenue), where parking can also be found.

I wouldn't recommend this trail to anyone. It is probably the worst trail I have ridden. In terrible shape with lots of cracks and bumps, riding along the river is harrowing at best very steep hills with cracks and leans towards the rock covered embankment new to the river. Stay away from this trail.

The trail is very smooth. It gets a little tight when you get by the river with a large wall on one side and a rocky drop to the river on the other. If there was a lot of people using the trail, it would be kind of sketchy but it was pretty quiet when I went through. It rides right down riverfront drive and 169 basically so its by no means a nature trail but that's to be expected of an in town trail. Eventually it winds by the police shooting range and then leads out of town.

quiet, except for the live ammo

We parked in Sibley Park to begin the trail - a very pretty start by the river. That changed quickly once we were out of the park! The path is wide enough and at 3:00 in the afternoon, very quiet - no bikers. That is the reason I gave it 2 stars - I kept wondering if we were actually on the bike trail. It's not scenic from a nature standpoint, it runs thru a very industrial part of town. You ride for the majority of the path right next to a 20' concrete wall on one side and a very steep bank of boulders down to the river below on the other. A couple of major hills down then up, which if you take advantage of the downward hill the up is not hard, but it's scary given the nature of the river bank, the concrete wall and any kids you might have in front of you! The Riverfront Park in town is lovely but beyond that the next "feature" is some kind of stinky treatment facility, then just around the bend is a firing range where a man with a rifle was sending ammo downrange...the path comes VERY close and while I'm sure it's safe, it seems to run parallel to the range, I mean, we could see the man's face behind the gun as he was shooting, we were not BEHIND him....a little unnerving, and very loud of course - this is where we turned around to head back. We will not be back to this trail.