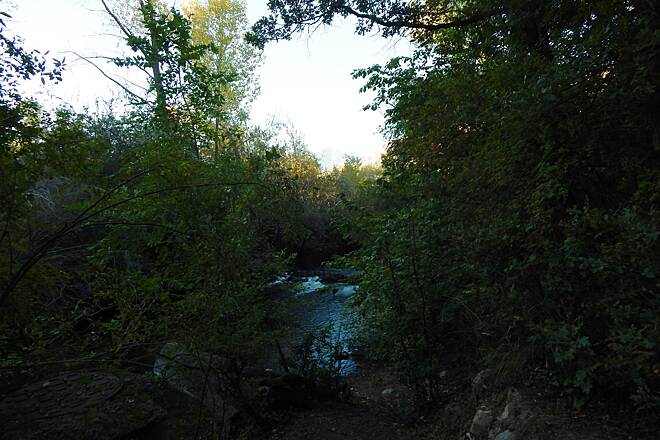 The Ogden River Parkway runs 9.6 miles along the Ogden River. Unimaginable years ago, given the industrial water pollution, valiant efforts have seen the river be restored and transformed into a healthy, vibrant nature retreat right in the heart of downtown Ogden.

The trail begins at the mouth of Ogden Canyon along State Route 39, and it travels west to Fort Buenaventura, where it links up with the Weber River Parkway. The Ogden River Parkway is also part of the Golden Spoke trail system, which spans more than 100 miles between Ogden and Provo.

Between stunning river views, hearty fishing, and access to attractions such as Rainbow Gardens and the Historic 25th Street district, the trail will appeal to a range of users. As you wander past the ponds and parks, be sure to find a shady spot to pause and just take it all in.

The Ogden River Parkway can be accessed from any of the intersecting roads, in addition to its trailheads at Ogden Canyon and Fort Buenaventura, which is a couple of miles south of the confluence of the Ogden and Weber rivers.

There are good parts

The trail from Riverdale to Fort Bonaventure is great. From the Fort north can be questionable as far as feeling safe. And about 2 miles south of Riverdale it becomes a dirt trail. So - limited safety, limited comfort for a trail that is so long!

It was a nice little trail skirting along a river and although the underpasses had issues with water pooling up for deep puddles the trail was pretty nice... except for the part where the Ogden River Parkway crosses a bridge west into Weber River Parkway. As soon as you cross that bridge west past the treatment plant into the industrial zone the trail gets a whole new vibe. Apparently locals don't ride that section much; debris, dust, twigs and such are littered across the trail whereas on the Ogden River section the debris seems to get scattered off the trail from usage. The Weber River section had grafitti sprayed on fences, beer cans, trash bags, papers, garbage spread everywhere. Homeless people, although seemingly friendly, not doing anything necessarily hostile were approaching me as I biked down the trail and ultimately I was just wierded completely when I came across a human turd someone flopped on the side of the trail. Someone had used a picnic bench as their toilet (TP spread everywhere) and that was it, I spun it around and got the heck out of there at that point. The other section of the Weber River was fine (the gravel section).

I got a kick out of the crazy signs posted along the trail
-no paintball allowed (is this really so much of an issue that it needs a sign)
-no lighting fires and shooting fireworks west of the river (I guess east of the river is totally fine though)
-no discharging of firearms into the city pond. (lol, really Ogden!)