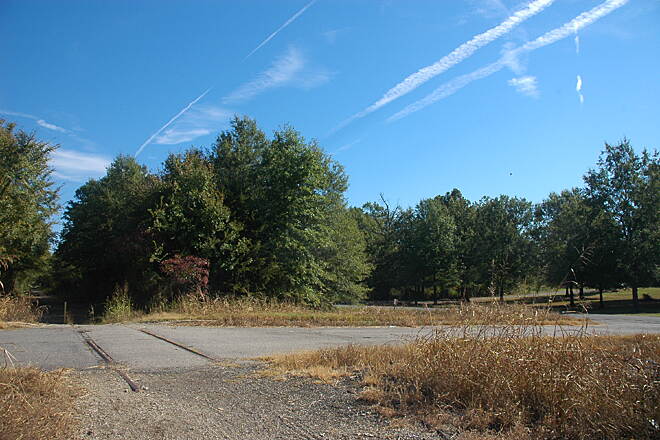 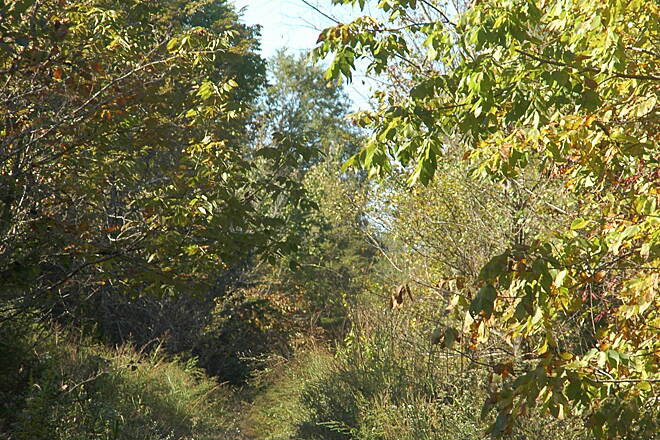 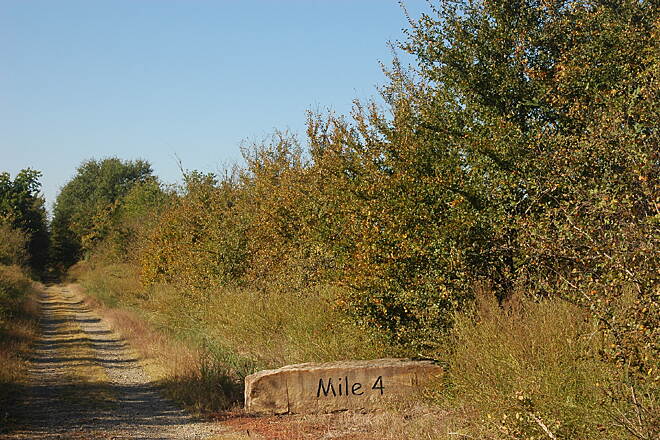 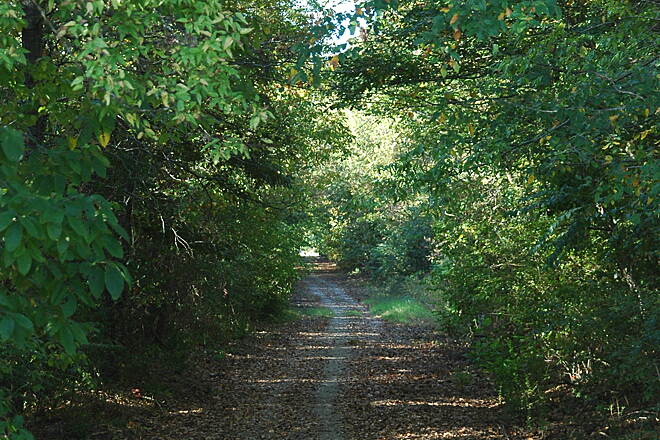 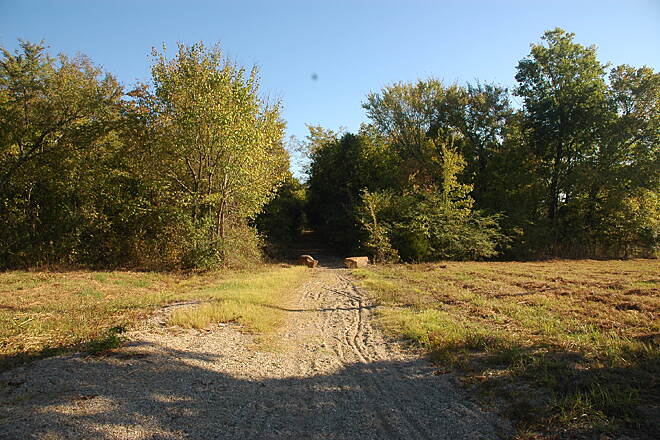 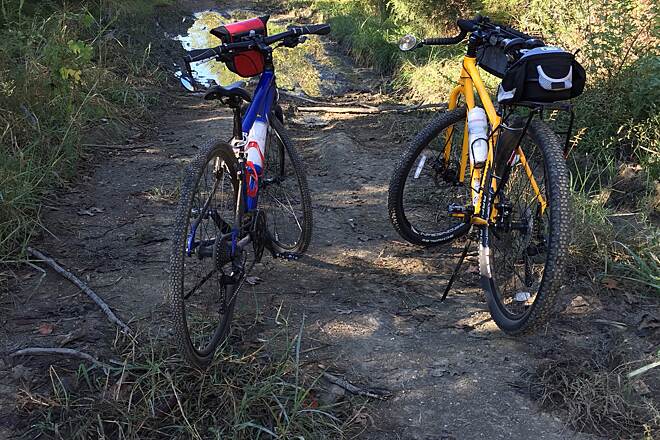 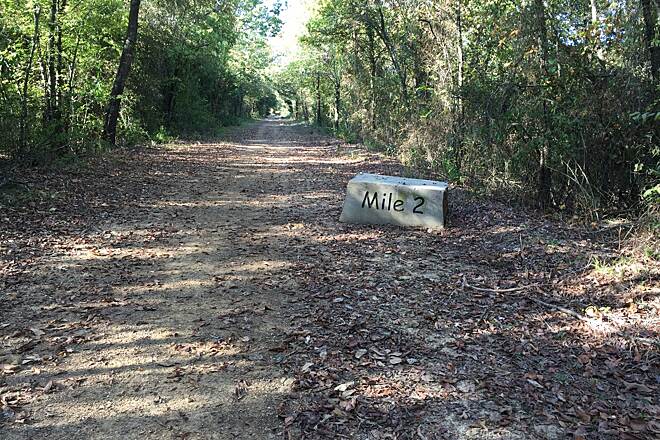 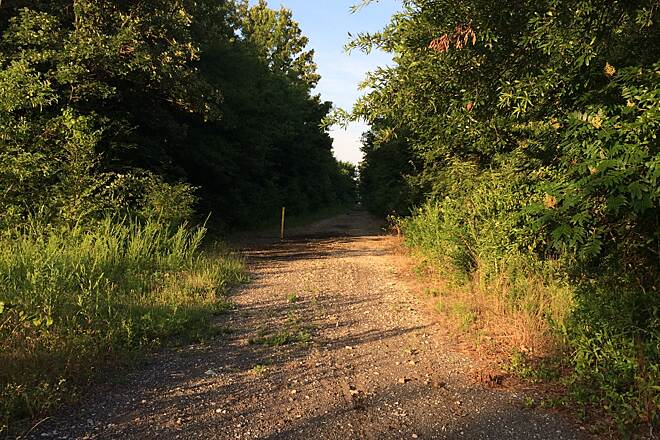 The Old Frisco Trail begins on the south end of Poteau, the county seat of eastern Oklahoma's Le Flore County, not far from the state's border with Arkansas. Most of the trail has a crushed stone surface and you'll cross occasional wooden trestles along the route. The pathway is relatively flat and parallels Old Wister Highway through a forested area.

Note that the trail is prone to flooding in rainy weather, so use caution.

Parking can be found in the PARC Ball Field, a half mile south of the northern trailhead on the western side of the trail (off US 271).

I love yo run the trail. There are four bridges on the trail the first one is 3/10 Mike in and very long. Right now 3 of the 4 bridges have art murals on them. The 4 th at the wister end will be done soon! Lots of kids ride their bikes here and lots more adults run this trail. It is a very safe area. I've been out there alone at 3:30-4am to stay out of the heat

A Trail to Be Recommended - with Exceptions

It proved true for us that the trail is prone to flooding, even it was not rainy weather. [More later] We can also confirm that the reviews that spoke of the neglected state of the second half of the trail proved true. As to the surface: in the beginning it was finely crushed stone and gravel, alternating with hard-packed soil and grass, but later, in the second half, the crushed stone became rougher and rougher, sometimes with pieces as big as a fist: not at all good for even my 2.2" wide tires, let alone Mary's with just 35 Millimeters. The result for her were three broken spokes in her rear wheel and a flat. We also found the second half of the trail way more overgrown than the first, and all bicycling ended for us shortly after we had reached mile marker 5, when there were trail-wide and deep puddles which we dared not ride our bicycles through. The sides of the trail were too overgrown and looked too swampy there for us to try and walk our bikes around the puddles. So we just turned around. As to the bridges: they were well maintained, but I decided to stop before each of them and walk my bicycle onto them as they were not level with the bike path but had steps of 5 to 8 inches to get onto them.
Conclusion: the trail is well worth riding as it leads you through a beautiful landscape, mostly under a great canopy of trees, which makes it pleasant even in the heat of a summer day, but I'd recommend the first half only. After that the surface becomes way too rough even for wide and knobby tires like my Salsa Fargo. The second part definitely needs a lot more care, cutting weeds and shrubs that overgrow it, replacing the way-too-coarse ground-stone surface with finer gravel, and filling the depressions in the trail so that it'll be rideable even after some rain. The trailhead in Poteau [since we didn't get to the other end I can't say anything about the trailhead in Wister] could also be improved: there's nothing but parking on the grass or at the side of a dirt road: a bench under a roof, a water fountain and facilities would greatly help there. But in spite of this, we really enjoyed our ride.
More about our experiences, with pictures, here:
http://tinyurl.com/q4z52gk

Love this trail, run it every week :)

The trail has had tons of work done to it over the last year. New boards on the bridges and lots of local artwork. It is a nice relaxing place to run or ride my bike.

Old Frisco Trail starts out as a surprise in the middle of nowhere and the rock that sits at the beginning of the trail exhumes a optimism of a trail that is well kept but as you progress on the trail, about 2.5 miles in, you realize that is not so. The trail consists of loose rocks and dirt then quickly morphs into nothing but rocks, which makes this one trail not to be taken lightly. You must have knobby tires for this one. The 2.5 miles you ride are well worth it if you can pull it off but the rest turns into tall grass and as the last reviewer mentioned this is a back trail so ticks and chiggers should be considered. If you are in the area and have nothing better to do then give this trail a try and then consider continuing all the way to Wister Lake. The view there is spectacular and is worth the journey. With some maintenance this trail could be spectacular. Bike trails should be incorporated all the way to Wister Lakes camp site as the ride is nothing short of spectacular as well as the view you are rewarded with.

My wife and I had a lot of fun riding this trail. From Poteau, the first five miles have been well kept up. We got into some waist-high grass between mile marker 5 and 6 (nice mile markers by the way). For fear of ticks and chiggers we decided not to go any further than the old railroad bridge near mile 6, which is a great place to take a break and eat your lunch. Old Wister Highway runs parallel to the trail and there are several bailouts in case you want to ride the road instead. We'll be back!

I just finished biking this trail a few minutes ago. I had given up on anyone ever performing upkeep years ago. I am glad to see that someone has finally taken notice. There are still a few problems with the barriers that are "supposed" to keep out ATVs, as I ran into quite a few that have been knocked down, but for the most part the trail is good.

If the city is starting to keep up with it then great, keep up the good work, if it is a private citizen(s) then let me know, I'll help out.

This trail had gotten run down but someone has gone in and reworked it. Four wheel vehicles were a problem in the past but barriers have been placed to discourage their use and to preserve the beautiful nature of the trail.

What an improvement!!! Great Running Trail!!

This trail has been reworked and is now in amazing condition. In the past you could not go a hundred feet without getting tangled up in branches. Now this trail is wide and clear of obstacles for the entire 8 Miles!! I am really happy to have such a great trail in Poteau to run on. There are mile markers on the trail now which is a really big plus! I hope others will start to utilize this trail, I think they will be pleasantly surprised at what they find when they get out and give it a try!!

Thanks to the guys who keep this up!

Running adjacent to the Arkansas River, the Rice Carden Walking Trail provides a pleasant out-and-back trip of just over 6 miles in the community of...

Situated in south Fayetteville, the Town Branch Trail connects to the Frisco Trail on its eastern end and heads west to Greathouse Park, a 6-acre...

Fayetteville's St. Paul Trail occupies a short section of what was once an 8-mile long branch line of the St. Louis-San Francisco Railway (the Frisco)...

The Shiloh Trail is a work in progress that will ultimately form a significant north–south route through the western reaches of Fayetteville. The...

The Tsa La Gi Trail is open in two disconnected segments in Fayetteville. While not particularly scenic, the trail is an extremely useful funnel for...

The Frisco Trail connects the vibrant entertainment center of Fayetteville on Dickson Street with newer development on the south side of Fayetteville....

Completed in 2015, the Razorback Regional Greenway spans a large portion of Northwest Arkansas, connecting the bustling hubs of Bentonville and...

The Oak Ridge Trail links the heart of the University of Arkansas' campus with Fayetteville's charming downtown. From the trail's eastern endpoint,...

The Scull Creek Trail, which opened in October of 2008, extends from the Frisco Trail at W. Prospect Street north past the Meadow Valley Trail, Mud...

The Hamestring Creek Trail is a developing path along its namesake waterway in western Fayetteville. Unusually, the trail currently dead-ends at both...