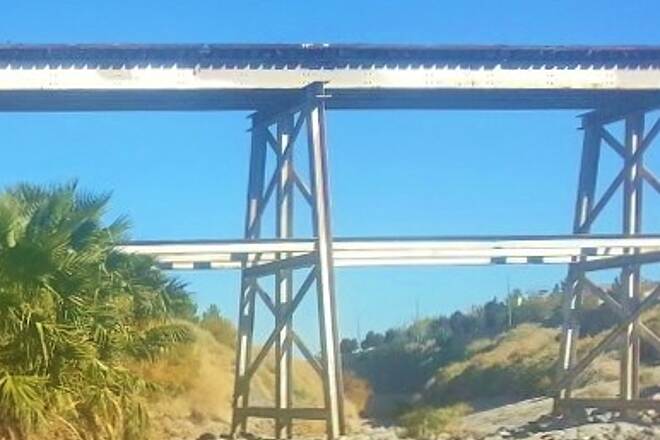 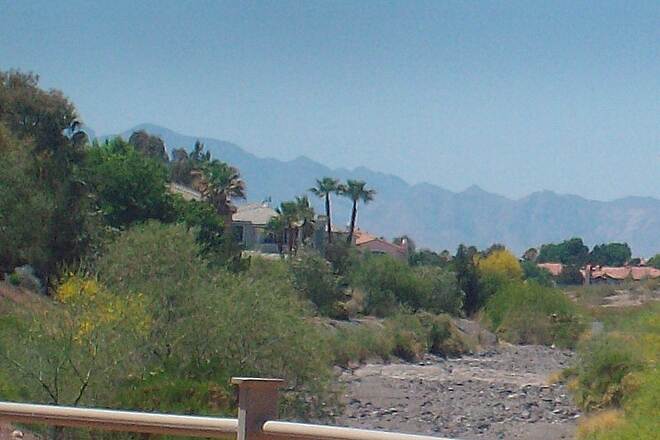 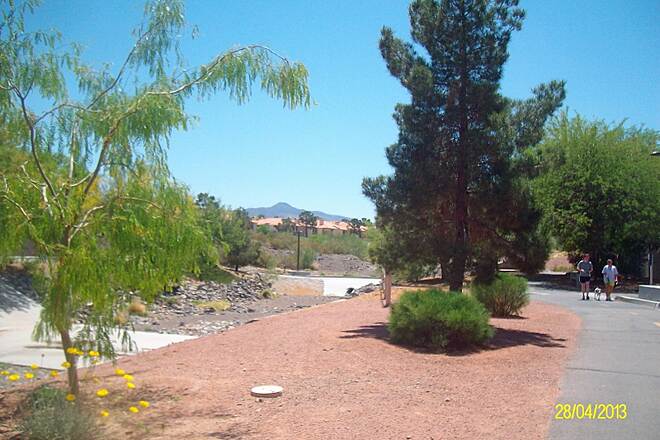 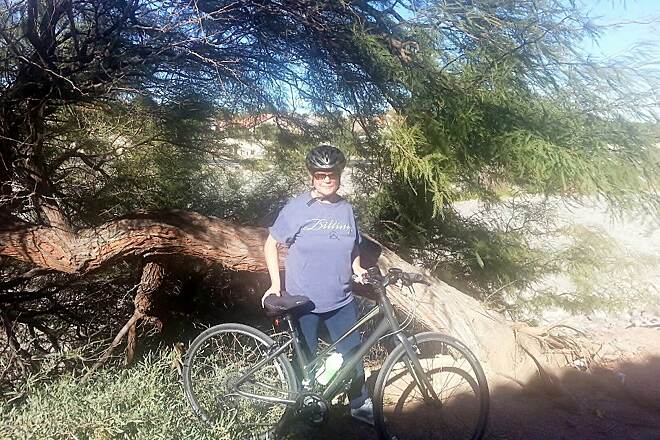 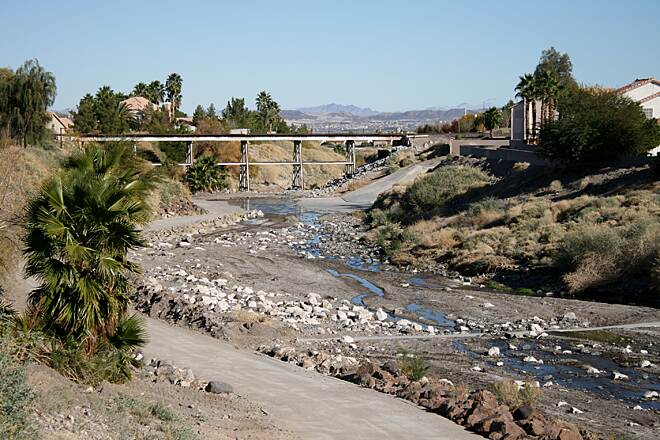 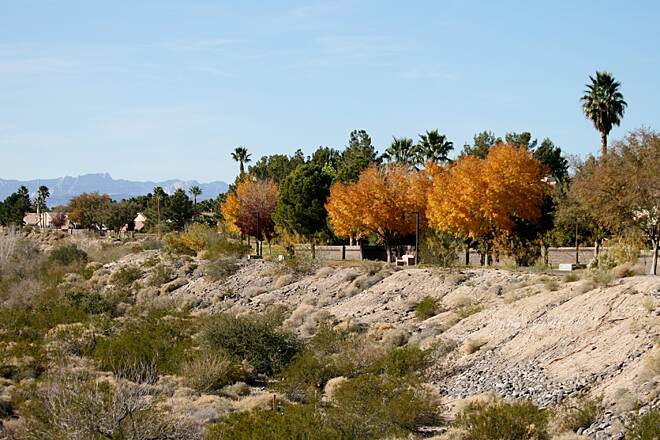 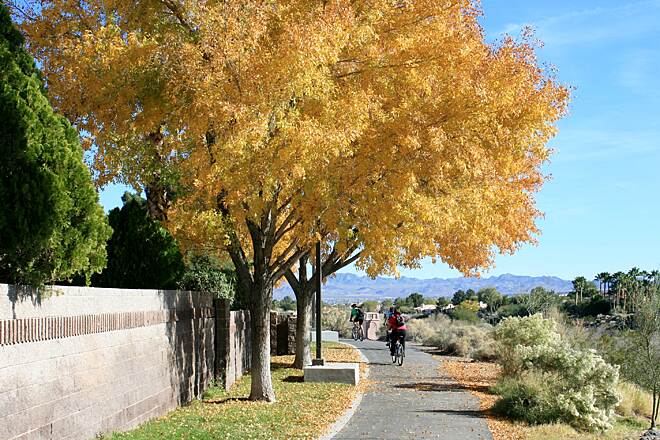 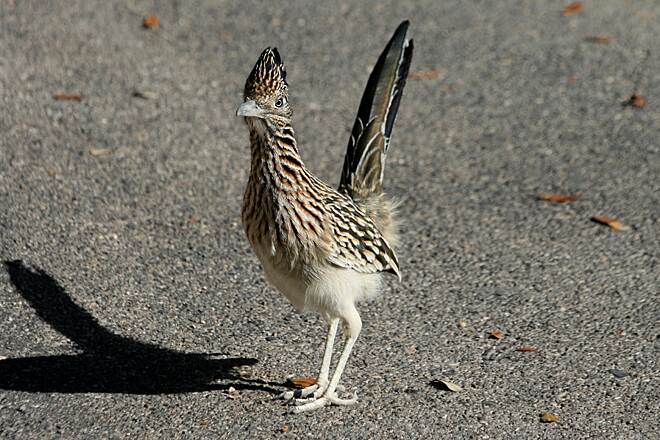 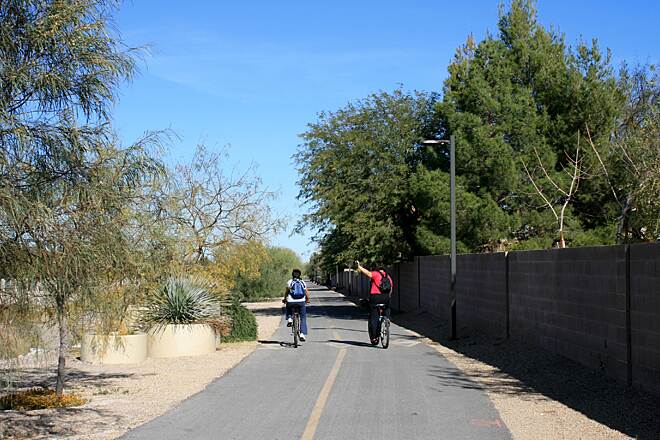 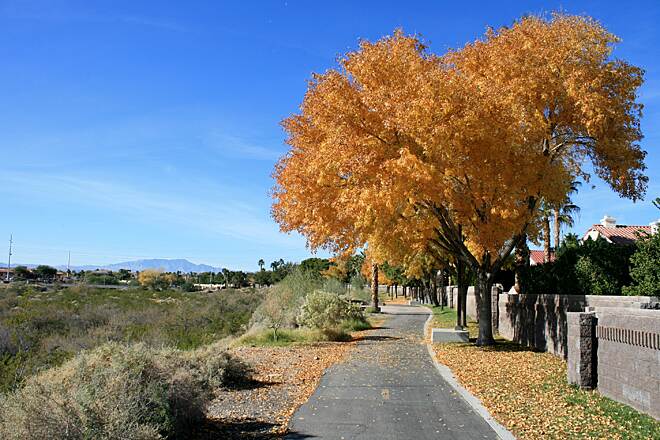 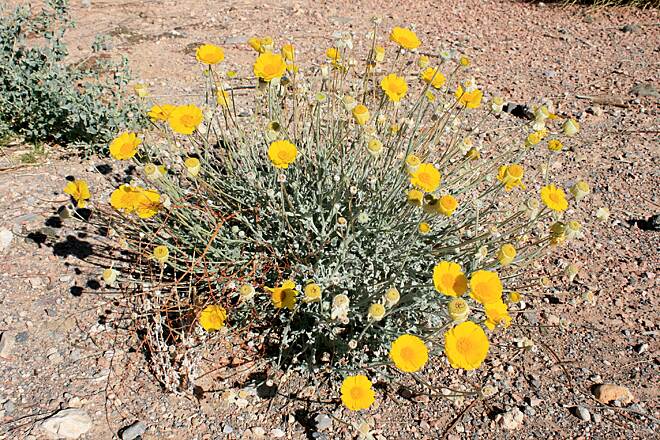 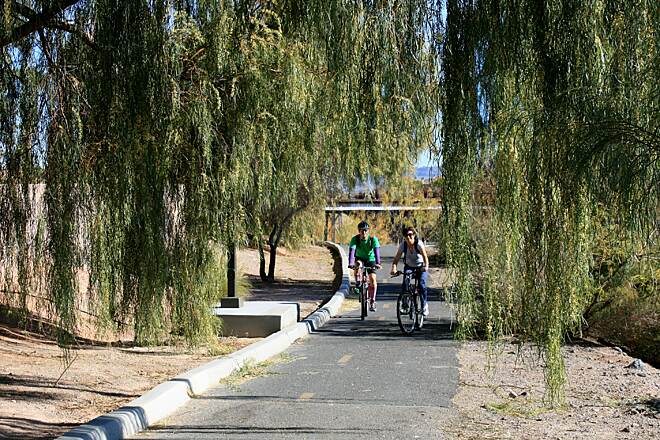 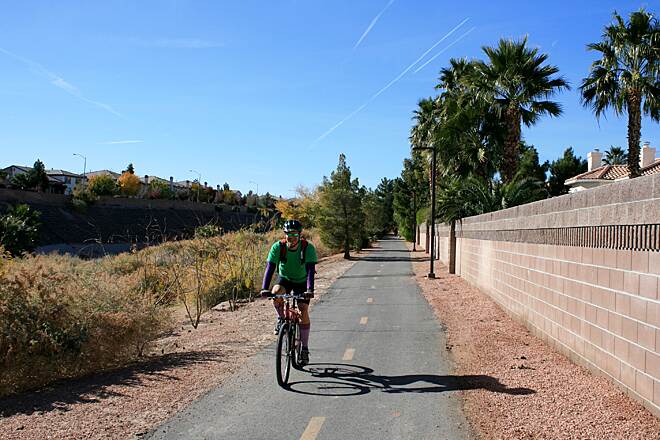 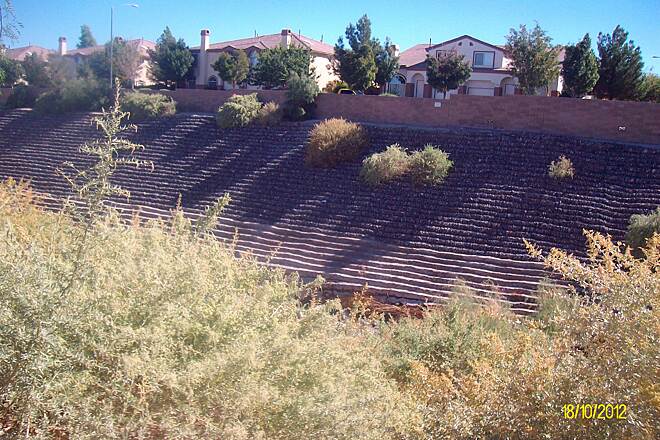 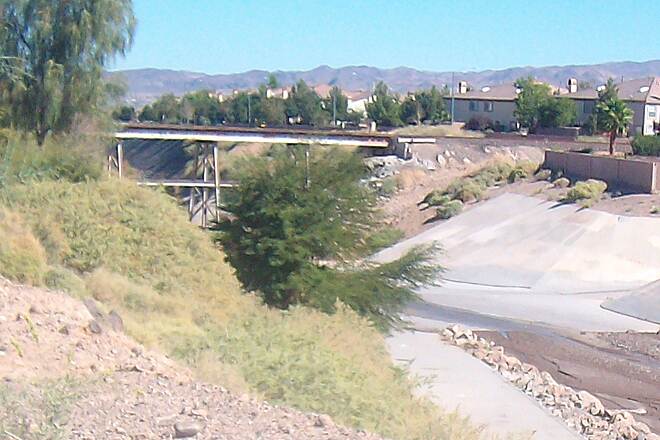 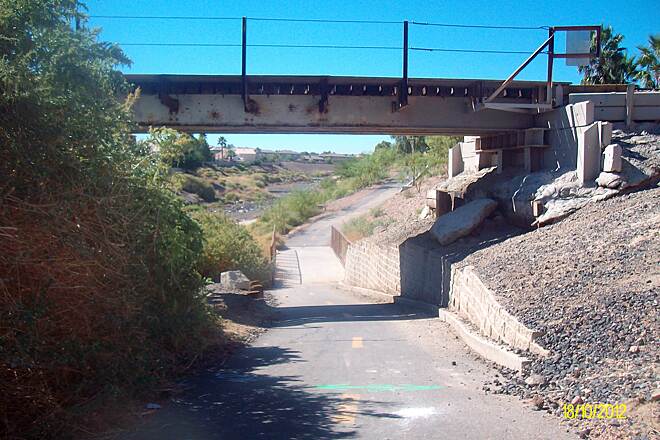 The Pitman Wash Trail follows what is usually a dry wash through residential neighborhoods in Henderson, a southern suburb of Las Vegas, from Pebble Road north to the Arroyo Grande Sports Complex. The trail is paved and the wash corridor is fairly narrow.

Love this trail. Ride this one every weekend

Love this trail. Ride this one every weekend

Great trail all the way through

I found the trail to be excellent. Must stay alert due to the areas of heavier pedestrian traffic ... bikes, walking dogs, etc ... but it was never overwhelming. Relatively wide, divided paved path helps. I also enjoyed running in the washway where there is a stone-lined path. Much less traffic, and it amounted to 1-2 miles of a solid trail run. I'd recommend this trail.

It is a great place to walk and enjoy fresh air. This morning during my usual walk I had a close encounter with a snake!!! I almost stepped on it, it was enjoying the sun right behind the Silver Spring Recreational Center. Other than the snake this morning, I love seeing the rabbits cruising around.

I suffered a very bad fall on my bicycle on June 21st while traversing this trail. At Valle Verde, the trail goes underground and the path is extremely narrow. I tried using it one day and ended up having to walk the bicycle all the way to the opposite side of Valle Verde. On June 21st, I elected to go to the point where the trail ends at street level. There's no ramp on this side, so you have to either go down the sidewalk or go over the curb to the street. On this day, traffic was light and I probably could have gone straight across to the other side where the trail continues, but I elected to go south on Valle Verde for half a block and then do a U-turn to get to the opposite side of the street. As I was coming back North and approaching the continuation of the trail, my front wheel went into a rut where the blacktop and the concrete don't meet. I was standing and pedaling and since the front wheel was stuck in this "groove," I went down hard on my right hip. I ended up with a broken right leg that required surgery and a steel rod in my hip. I've been in a non-weight bearing condition with my right leg and have several more weeks of healing and therapy before I'll be able to walk again without crutches or a walker. Some maps show this trail ends at Valle Verde and I guess at one time it did end here. It's obviously been extended, and that's great, but there should be a better crossing at Valle Verde than the pathetically narrow underpass that now exists.

Wonderful place to take a walk

A friend and I like to walk during our stays in Las Vegas. This time instead of walking the blocks around our hotel (which is off the strip and there is not much to look at!) I searched for a "scenic" trail for us to get our walking in. How refreshing to find a paved trail. It was serene, clean, and can't count out the beautiful weather. Directions were excellent and we had no trouble finding where to park. Also the notations of where the bathrooms were was a big plus. We also headed over to the North Las Vegas Wash on other days. We will definitely walk both places again on our next trip.

Great for an easy scenic run, altho you can go into the wash for a bit of a workout on a very tight sandy single trail {several in fact} be careful of Wigwam Parkway as it is the only real Road crossing Hazard.

There are many stops and signs along the Trail, Great Fun!

This will end up being one of the most scenic trails within a residential area. Rode a completed portion from Arroyo Grande Sports Complex to N Green Valley Pky & return. It is upgrade to the west with one short steep dip under the Union Pacific RR Track. Wide and deep wash with distant vistas of the River Mountains to the east. With the effort being put into this trail, I would rate it five stars when complete. Noel Keller 18 Oct 2012

Just off 215 and Eastern on Pebble drive, we parked at Pebble Park. The trail follows the Pitman wash and is black top the entire way. Only two raod crossings; one at the Pebble park, and the other 1/2 mile down. Trail also has lamps. We walked 3 miles and turned around at the city rec center where I used the restroom. Heading back was slightly uphill with a total of 100 yds of elevation gradually over the 3 miles. 1/30/12. P.S. Only a 15 minute drive from MGM, when you take Paradise to 215 to Eastern.