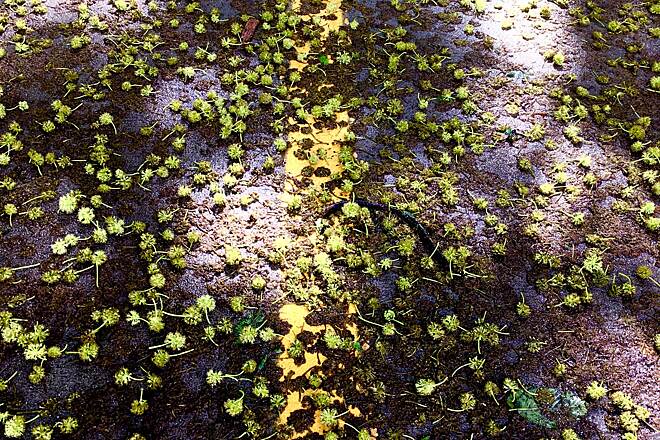 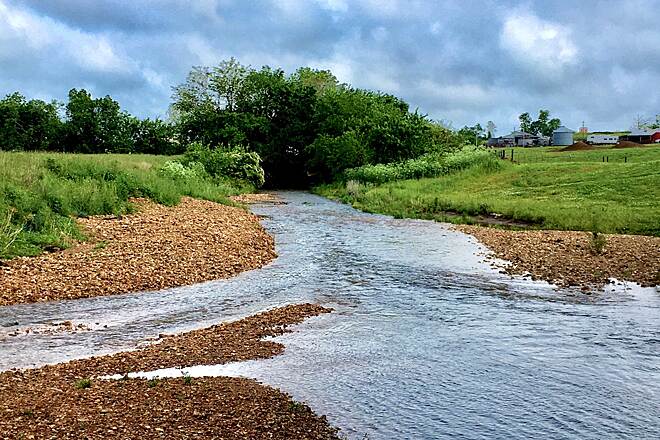 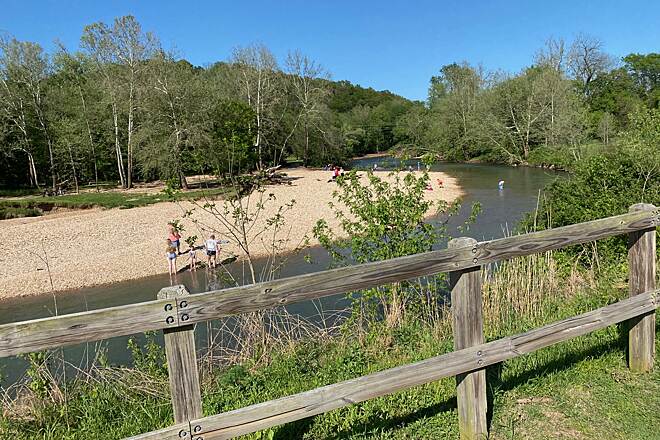 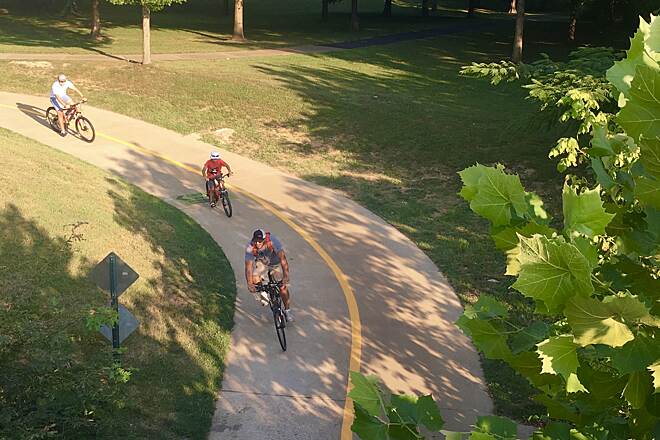 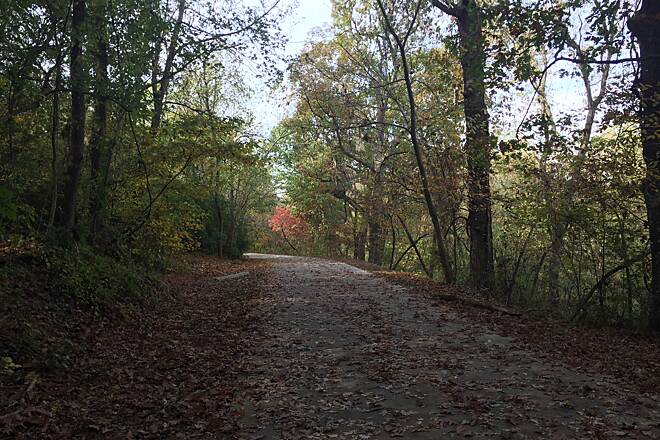 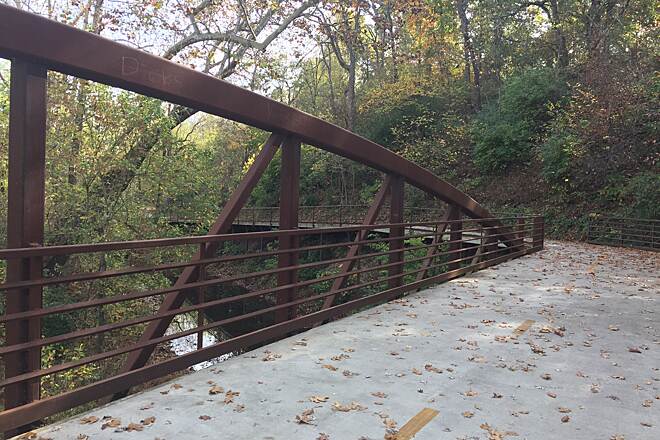 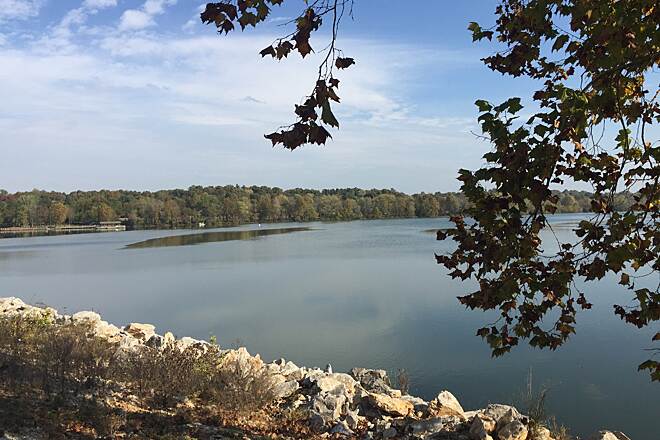 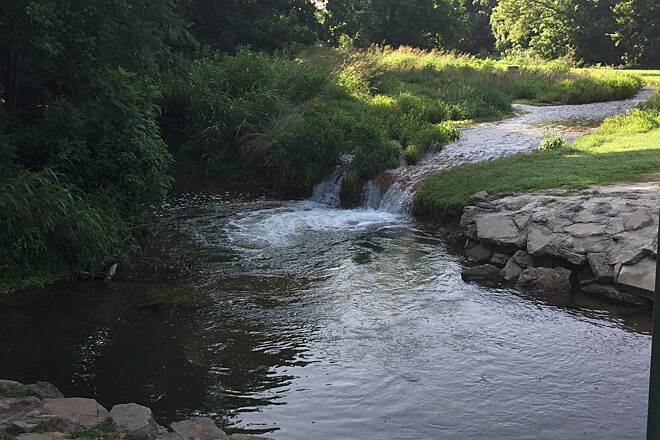 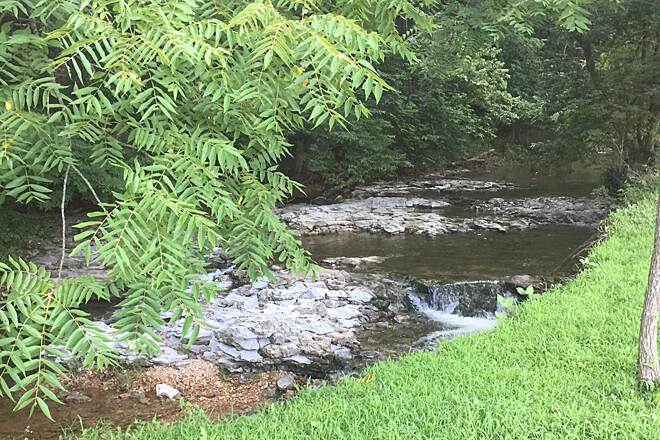 Completed in 2015, the Razorback Regional Greenway spans a large portion of Northwest Arkansas, connecting the bustling hubs of Bentonville and Fayetteville with the growing suburban communities of Rogers, Springdale and Lowell in-between. Running for 36 miles, the trail is entirely off-road, with the exception of a few short sections of adjacent sidewalk and protected bike lane throughout and a brief share-the-road stretch in central Bentonville.

The trail runs through the downtown districts of Fayetteville, Bentonville and Springdale, providing direct access to various civic, entertainment and retail destinations. Other highlights along the trail's route include the University of Arkansas and Northwest Arkansas Mall in Fayetteville, the Crystal Bridges Museum of American Art in Bentonville, and both Mercy Hospital Northwest Arkansas and Pinnacle Hills Promenade in Rogers.

Scenic Lake Fayetteville, Lake Springdale and Lake Bella Vista provide additional opportunities for recreation along the way, as do the countless parks and several other trails linked by the system.

The Razorback Regional Greenway actually is a collection of 19 individual trails, all of which maintain their distinct identities. Refer to the individual TrailLink pages for more information on each segment. The component trails, from north (Bella Vista Lake in Bentonville) to south (south of Walker Park in Fayetteville) follow:

Parking for the Razorback Regional Greenway is available at dozens of trailside locations throughout Northwest Arkansas. Refer to the TrailLink pages for each component trail for precise locations and more information.

A Gem of a Trail

We put in at the start of the trail in Bella Vista & rode to South Fayetteville, 35 miles. Very scenic with a variety of terrain & yes there are a few hills. I would advise riding it from the other direction from Fay to BV because of that but nonetheless a great trail from start to finish.

Rode the southern portion of the trail in May 2019. Started at the "Bike Route Bike Shop"and went south to Kessler Mountain Regional Park and back. Trail is well kept and thought out. One thing I noticed, as a first time visitor to the area, riding south is more intuitive than riding back north. That being said, the trail is well designed and well kept. 4.5 stars! Lastly, after your ride, make sure to stop at HUGO's for a meal! The "Blue Moon Burger" is tasty!
Thx
BN

I can’t say enough great things about this trail. Rode it without any fuss and beautiful I might add! A treat for sure’

I was in Arkansas last week, visiting from PA and rode this trail, one of the best trails I have ever ridden. I am on a quest to ride 100 miles in each state and rode 62 miles one day and 40 the next and greatly enjoyed this trail. Going through a couple of towns the way the trail and the road is separated was fantastic.

As visitors, rode some of the Greenway for first time this week. Awesome trail system. We thought the Tulsa OK trails were good but this system has them beaten for standard and variety of users. We rode trikes but the systems available for all grades of mountain bikers was phenomenal.
Only complaint we had, maybe more of a comment, signage could be better in some places. As the system is made up of many trails, it was confusing when trying to go from one to another. Got onto the wrong trail twice because no signage at any trail splits.only reason we didn't give 5 stars.

We love riding our bikes on the Razorback Regional Greenway. You can pick and choose different places to park and ride. We enjoy riding with friends whenever we can.

I am fairly new to biking, but this is one of the most amazing trail systems I have ever seen. I have only ridden the northern half so far, and have enjoyed it every time I've gone out. Don't stop branching out. I live in Cave Springs and would love to see a trailhead closer to me where I can jump on. There are some signage issues that need to be dealt with. Especially around the New Hope area. Thanks again for providing an excellent trail.

I live in Springdale and ride four miles from home through city streets to downtown where I catch the Greenway.

At the moment the trail is blocked in two places going north. Signs say the trail is closed at Pleasant Grove Road, but I continued on all the way until where it crosses under I-49. It's blocked there and will be for several months because they are widening I-49 and building the trestles under the highway.

There is a detour shown from Pleasant Grove up over and around I-49 but I'm told it's on city streets and bit hazardous. And up near Bella Vista in the north its closed by more highway construction for the new bypass.

It's called progress and when it opens again it will be possible to traverse then entire path from north to south. It is a fun and picturesque ride. In some fifteen months I've ridden some 3,000+ miles on this system on a recumbent trike. It's a lot of fun.

More and more trails are connecting to the system in the coming years. You just need to be patient. It's only going to get better and better.

I don't know wher to start, but it looks like this is the first review of this trail. I'll start by saying this is one of the top trails in the country. What they (whoever that group of folks may be) have done is a engineering marvel. I live in Missouri and I am a bicycle tourist. I have camped, backpacked and enjoyed the Arkansas scenery for many years.

The way I did the trail was like this...I parked near the Northern end at a Lowe's Home Improvement. They do not allow overnight parking at the trailhead at Bella Vista or Bentonville or any trailhead at for that matter. I rode my loaded touring Bike South to Fayetteville, which was a wonderful ride. The only problem I encountered, was that the 2 campgrounds in Fayetteville did not allow tent camping of any sort. I found a RV campground 6-7 miles South of Fayetteville called the "Cow Patty" and they had no problem with a tent. The only negative thing about that is that 6-7 miles on HWY 71 which is pretty much bicycle unfriendly. After spending the night at the Cow Patty, I headed back North to my vehicle parked at Lowe's which was still in the parking lot. I did call them ahead of time and had the O.K. to park there.

I'll repeat; this trail is an engineering marvel. I won't go into details because you'll have to see for yourself how they wound it through the various cities. It is 95% concrete trail, seperate from the roadway.

The only problem I had with the trail was some of the signage. It looks as though it was placed by someone who has never ridden the trail. This problem is compounded by the fact that the trail travels through many different cities and is composed of 19 trails which are listed on this website at the homepage for this trail. Why they don't get rid of the 19 trail names and just call it the Razorback Greenway and rename the side trails is beyond me.

The worse places I saw for signage problems were in Bentonville, South of the Neil compton home through the rest of Bentonville and in Springdale. I think the powers to be would be really enlightened to find someone who has not traveled the Greenway before, and follow them and see the reaction they have to the signage. they would need to do this North and South.

As it is now, the whole trail is 95% nice concrete and mostly brand new. At some point you have to get rid of the 19 trails it is composed of.

I also think that the mile markers for the trail are useless, they need to be much more often, say every tenth of a mile instead of every mile.

And lastly, they need to provide overnight parking at leat at the beginning, middle and ends. I give the city of Bentonville and Bella Vista zero stars for this matter. The suggestions I was given was to park up at the Missouri state line at the Walmart. I E-mailed the director of the Bentonville Parks and Recreation, David Wright. Much of the parking information I got was from him, another Bentonville Parks employee or the Bella Vista police Department. Mr. Wright was the only one that did not suggest the Walmart up at the Missouri state line and the dangerous highway I would have to navigate on my bicycle to get to the Northers end of the trail.

I was told over and over, no camping alsong the trail, but as I knew I would find, homeless folks are already using the trail and camping. Especially at the Southern end in Fayetteville.

Special thanks to the Lowe's in Bentonville/Bella Vista for letting me park. Even more so, Thanks to whoever engineered & designed the trail. They will always have a job. Pat yourself on the back.

In closing, I would say, fix the signage, allow overnight parking and make public those locations.