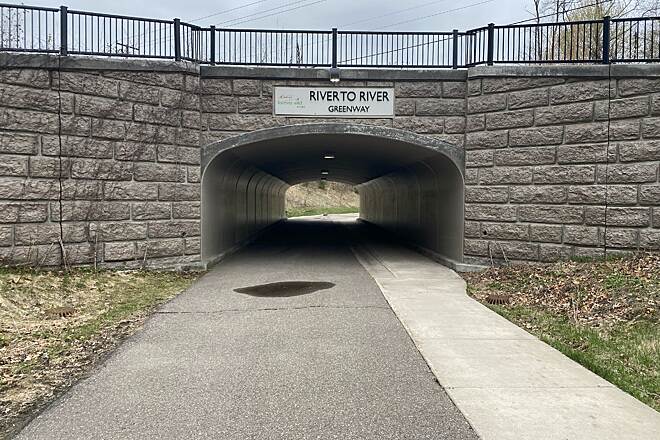 The mighty Mississippi and Minnesota River are the two waterways connected by the River to River Greenway. (The project was formerly known by the less colorful moniker North Urban Regional Trail.) Spanning nearly 8 miles, the trail is part of a larger trail network that will one day consist of more than 200 miles of multi-use trails in Dakota County.

The tree-lined, paved pathway connects the communities of South St. Paul, West St. Paul, Mendota Heights, and Lilydale as it travels east to west. It also provides a key link between two major trails: the Mississippi River Regional Trail on its east end and the Big Rivers Regional Trail to the west.

Popular attractions along the route include Kaposia Park with its picturesque ravine, Thompson County Park with woodlands and a lake, Marthaler Park (notable for its fishing opportunities), and  Valley Park with picnic areas, a playground, and athletic facilities.

Parking options from east to west include:

Fairy scenic for being in the city, connects to other nice trails. Went the wrong way a couple of times but the mapped helped me figure it out. Nice paved trail. Bumpy In spots.

I started at Simon's Ravine and followed the map I had downloaded on my phone via the Trail Link Map. I have a phone mount on my handlebars so I was able to follow my GPS location along the Trail Link map. It is a great help because their are not any signs to help you on this trail because it is a combination of park and street trails. The downloaded map and having my phone GPS were essential because I tried once before with the printed map from TrailLink and got lost. After reaching the end of the trail, I decided to be adventurous and took the Big Rivers trail and Harriet Island trails to get to the new Robert Piram Trail that a fellow biker at Simon Ravine said was finished. At the end of the Harriet Island trails I took Filmore street toward the St Paul Airport and then took Plato Blvd and that intersected with the Piram trail which I was able to take all the way back to Kaposia landing. Parts of the Piram trail were blocked with Plywood Stands but many people were going around them so I did too. The trail is beautiful and no construction going on anymore on the trail, but no signs like the City Plan says they are going to have. It was a really fun day. After getting to Kaposia, I decided to do another 12 or so miles by doing the MRT to the Swing Bridge and back.
I highly recommend the River to River Greenway because in and of itself it is fun, but it is connected to other great trails so that makes it even better. Also it is cool because it has restaurants along the way and coffee shops so that makes it very enjoyable!

I started at the east end of this trail, where there is a car park and road 10 miles south along the Mississippi. The trail is on the map, but is not labeled. The pavement was excellant and views of the river were great. I only went up the Caribou Coffee on Highway 53, but the trail goes on from there ever further.