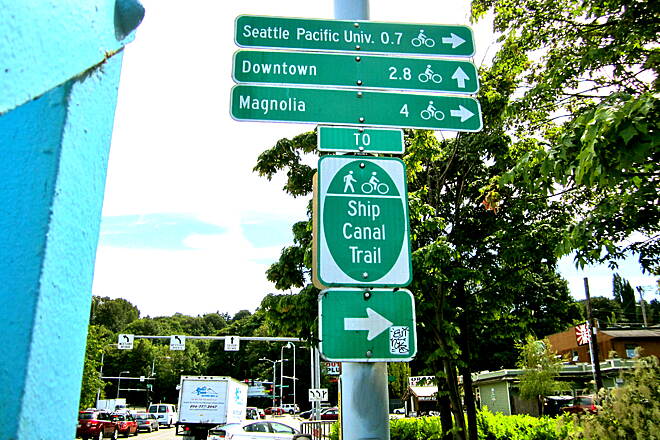 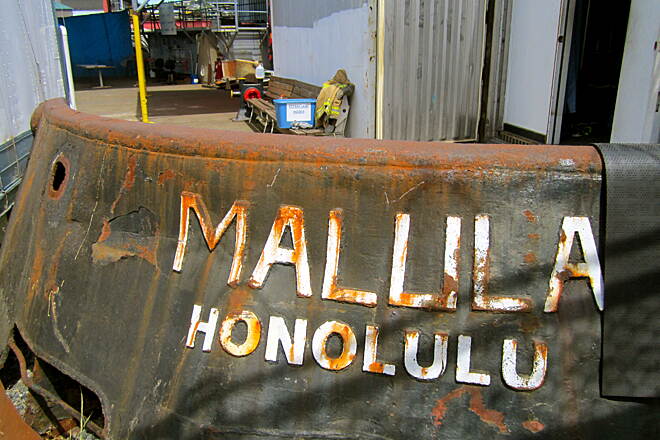 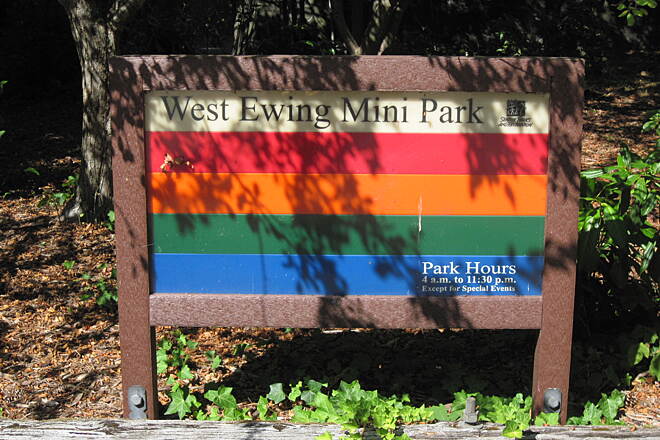 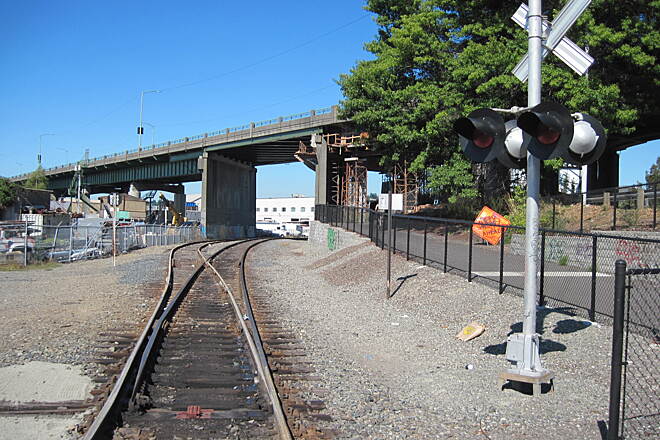 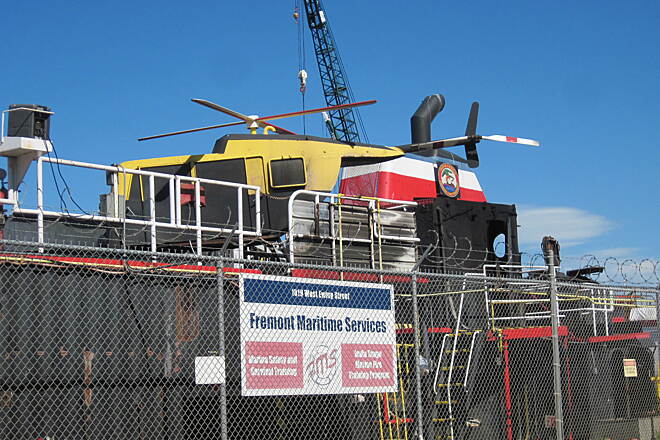 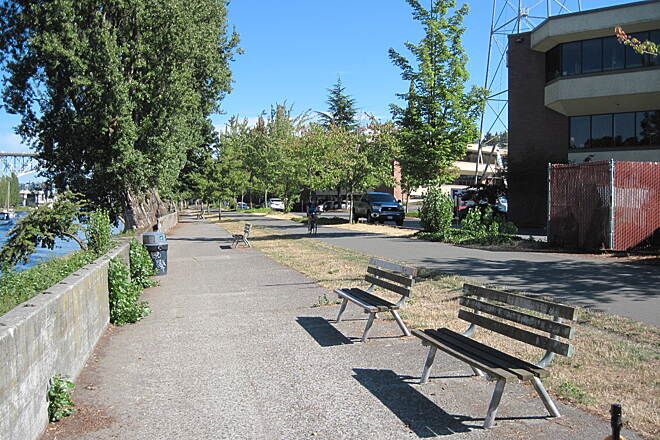 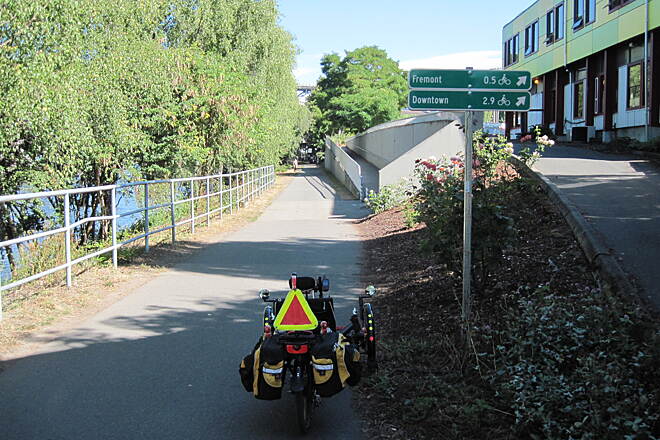 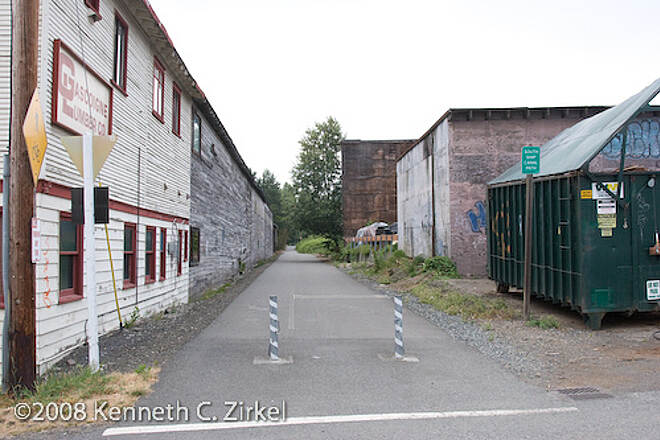 View Trail Map Send to App
Across the waterway from its big brother (the Burke-Gilman Trail), the Ship Canal Trail runs along the southern edge of the Lake Washington Ship Canal near Seattle Pacific University. The trail links the Burke-Gilman Trail via the Fremont Avenue Bridge with the bike path on W. Emerson Place near Fishermen's Terminal.

The completion of the trail to its current western terminus makes it possible for intrepid bikers and runners to travel from Redmond to downtown Seattle almost entirely on non-motorized paths. The Ship Canal Trail is popular with dog-walkers and joggers.

Parking for the Ship Canal Trail can be found at Fishermen's Terminal off W. Emerson Place.

Not long but unique

Probably I like this trail for all the wrong reasons.

I would assume that the industrial strength section, which lies closest to the Ballard Bridge, will not get rave reviews for its shipyards, scrapped vessels, and old wooden warehouses that haven't seen a paintbrush for decades.

As for me I like this stretch of the Ship Canal Trail best because it offers something the glamorous Burke-Gilman does not.

I am a sucker for anything nautical.

For example the other day headed east on the trail a few hundred yards from the south end of the Ballard Bridge I saw before me orange flames licking the sky.

This turned out to be a Fremont Maritime Services "fire at sea" drill.
The company provides certified training to ships crews in fire emergency resposnse aboard the good ship Fire Dragon right beside the trail.

It was quite realistic and interesting taking all this in whilst the PA was summoning the crew to deal with " a fire in the engine room with a severed fuel line".

I cycled a bit farther and came upon rusting stern section of the Malila ..that was all that survived after her long since scrapping.

There were more relics of the sea. The good old Foss buoys that guard the entrance to one of Seattle's oldest maritime services.

Yeah I like the other half of the trail heading east where the Seattle Pacific University campus trail begins. what's not to like about park like, lawns, picnic tables, benches and canal and Fremont Bridge opening and closing viewpoints?

The Ship Canal Trail is kinda the Newark International Airport of Seattle bike trails. You go through it to go to a lot of destinations.
Commuters ride it downtown.
You can stay on it (easterly) going under the Fremond Bridge and take the SouthLake Union loop where you can end up in the University District. You'll go right by the Washington Museum of History and Industry, The Center For Wooden Boats and some of Seattle finest restaurants.
Or you can take the path off ramp past the funeral home crossing the bridge to hook up with the Burke-Gilman Trail that can take you west to Ballard and Golden Gardens or east to Redmond.

I usually access the trail via the south end of the Ballard Bridge. (most trail users use the south end of the Fremont Bridge)
At the very end of the bridge go down the steps that will lead you to the Ship Canal Trail. Be careful crossing the roadway under the bridge then go right to go to the Fremont Bridge ..or.left to go downtown via Magnolia, the Pier 91 crusie ship terminal, Myrtle Edwards Park, Olympic Park and Alaskan Way no far from the Pike Place Market and other stuff to see on the waterfront.

Not as much traffic on this trail.

Have the feeling many haven't discovered this one yet. It's still relatively new.

I have found it to be usually uncrowded.

I ride this trail to and from work daily. It is well maintained and a nice flat ride. The wind in the afternoon can really get going generally in a west to east wind. Not too high a volume of riders. It is almost like it is a secret or something. So much better than riding on the death trap know as Nickerson. Meets up with the Burke-Gillman trail in Fremont.

TRAILBEAR ON THE CANAL – The Ship Canal Trail

Not a bad little trail. An entire 1.91 miles long, but it does connect to the Burke-Gilman and the Cheshiahud Lake Union Loop trail. It offers good views of the Ship Canal with lots of benches and a shaded parking lot. That is always nice when it is hot in Seattle.

We fell over it coming back from the Ballard Locks and the far end of the Burke-Gilman trail. A wrong turn and we were heading over the Fremont Bridge … so take a right and see where this trail is. There were signs. We turned right on 3d Ave. W. and arrived at the West Ewing Mini Park two blocks later. This is about the middle of the trail and the only trailhead.

The park runs along the canal from 3d. Ave. down to the Fremont Bridge. A nice spot to relax. Old cottonwoods along the canal bank, many benches, shady trees, view parking – but no water or restrooms seen, so come prepared.

The park is the dividing line between the industrial waterfront trail and the yuppie waterfront trail. Behind the trail in the park are office blocks and the Seattle Pacific University playing fields. Head west on the trail from the park are you are riding through industrial waterfront. Here is a lumber yard. There is the Foss Shipyard. Ahead are the rail lines leading into the Interbay rail yards. The trail ends by the Fisherman’s Terminal.

At the western end you will have to scout about for a safe street connection to the Elliot Bay Trail – which runs through, then around the western side of the rail yards at Interbay. Downtown awaits when you figure that one out. Enjoy.

TrailBear
Watching the canal traffic from a shady spot.

I only saw the trail at the terminus area, at 6th avenue. I didn't have my bike to try it out. The asphalt seemed pretty well kept, although the paint markings looked like they were wearing off.

Currently there are lots of blackberry bushes growing over part of the trail east of 6th avenue. It's still passable, though, and not very busy. However, it wasn't abandoned, either; I saw several cyclists and walkers while I was picking some blackberries. There is a park and a university near here and it is a quiet, pleasant neighborhood.

It looks like the city will soon be extending the trail west to meet with the Emerson Street Bike Path. Details here: