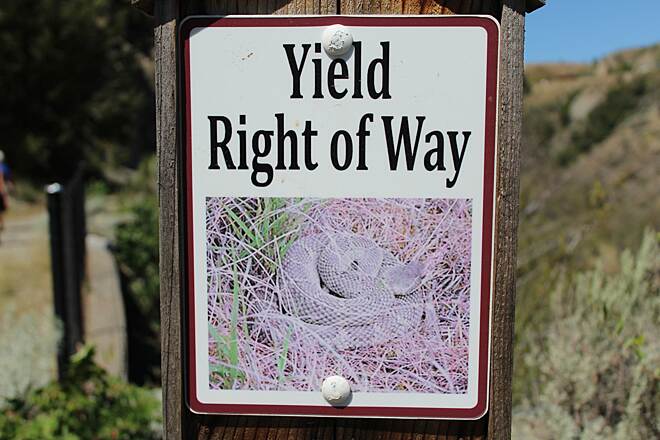 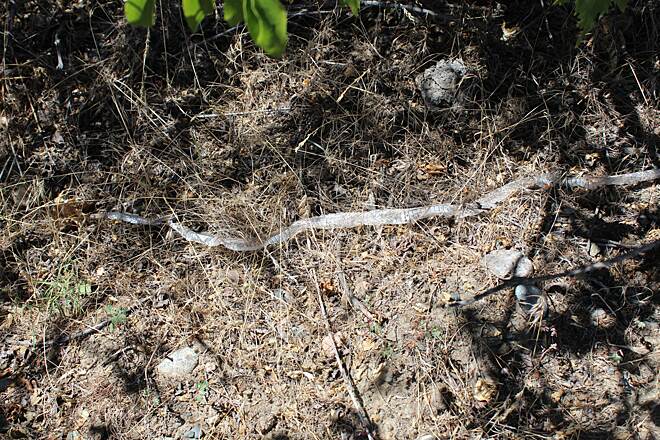 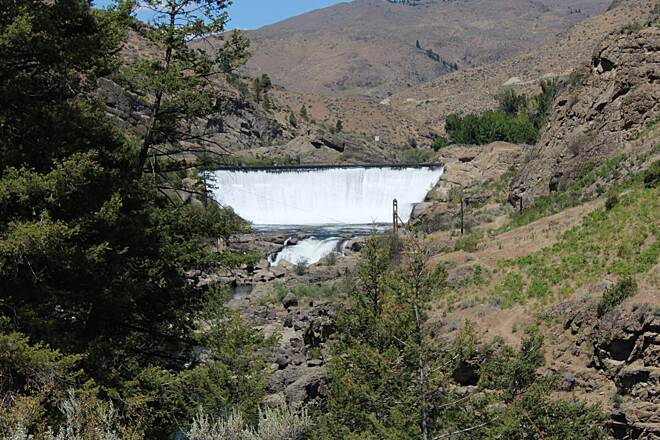 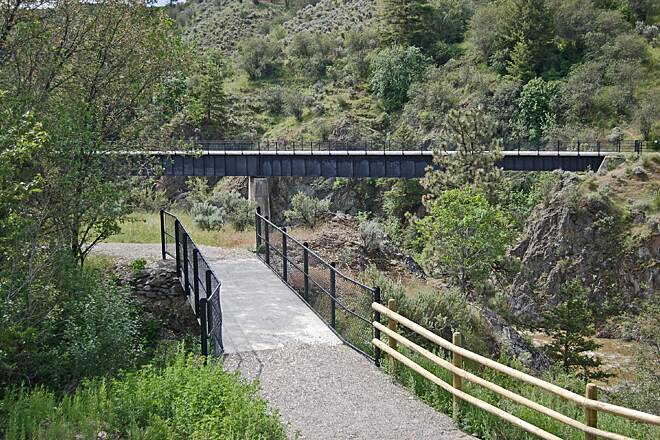 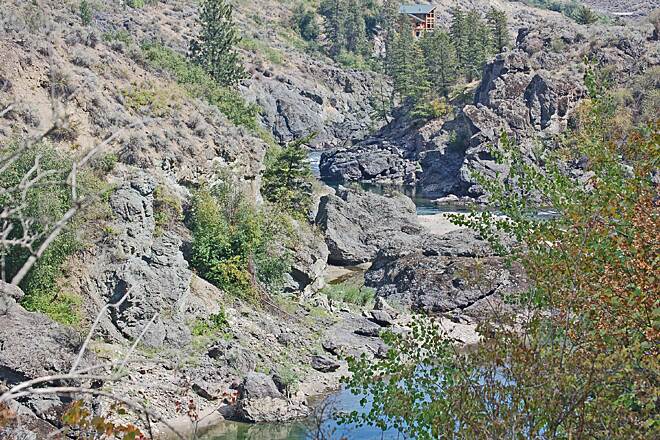 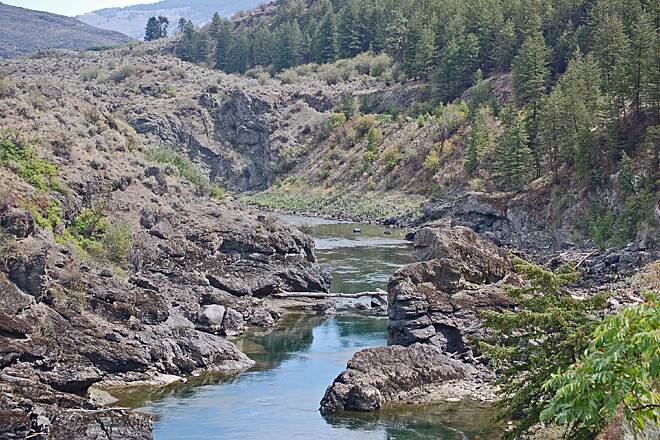 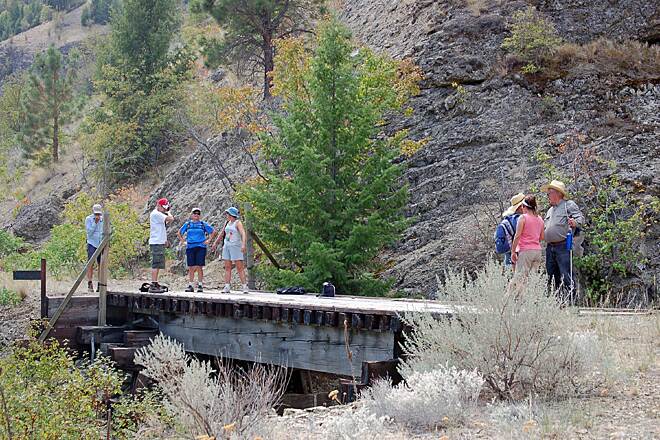 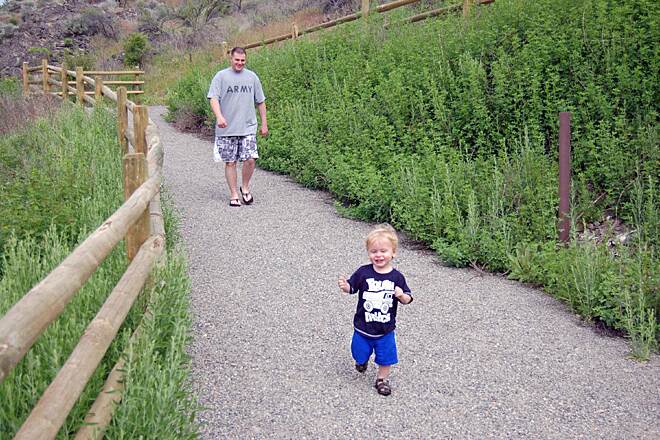 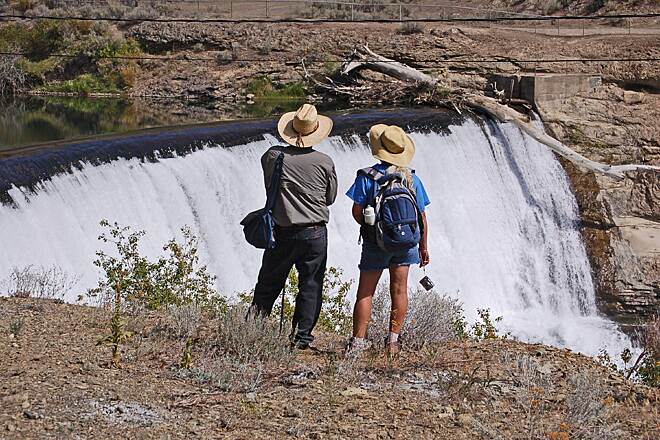 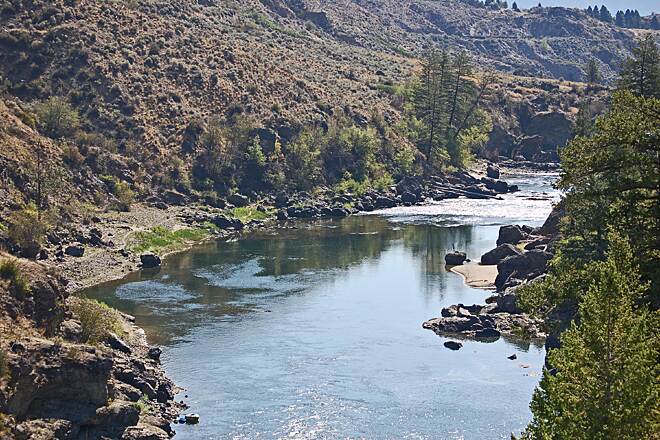 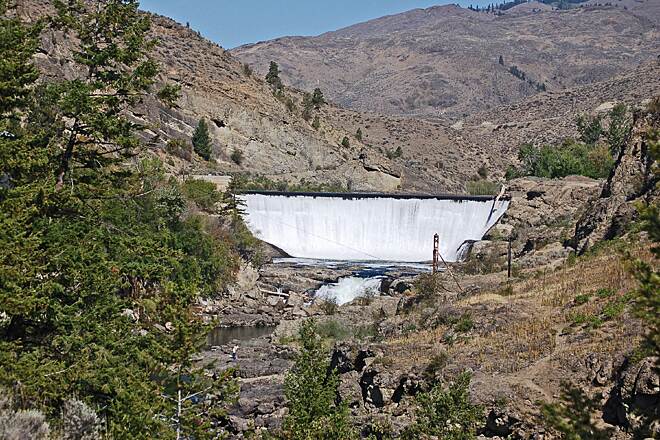 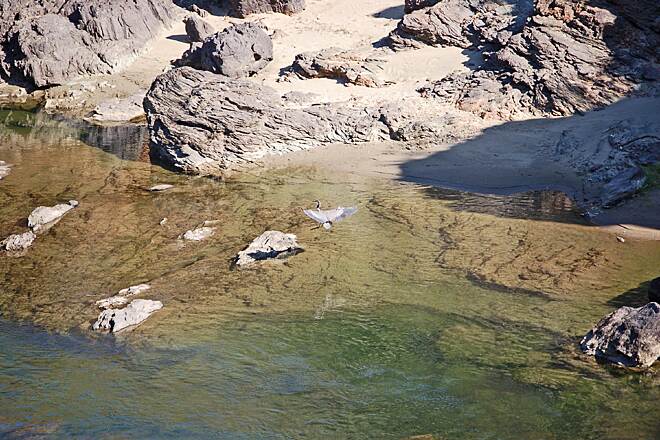 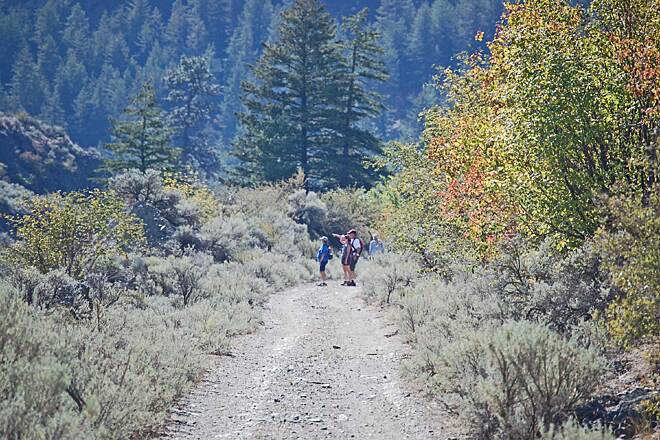 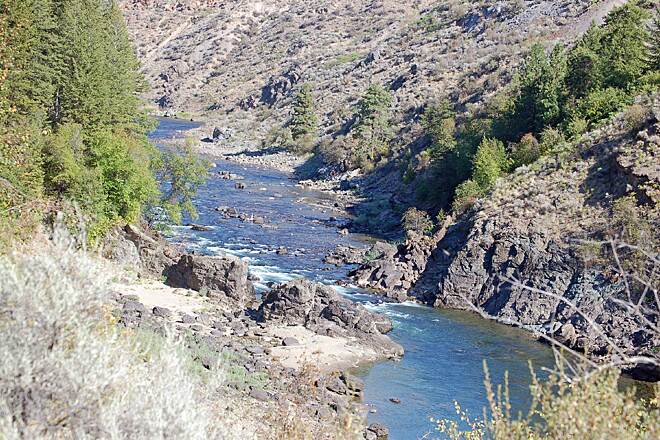 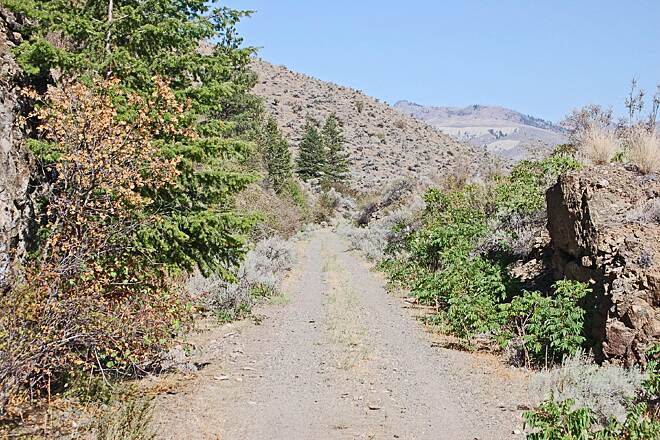 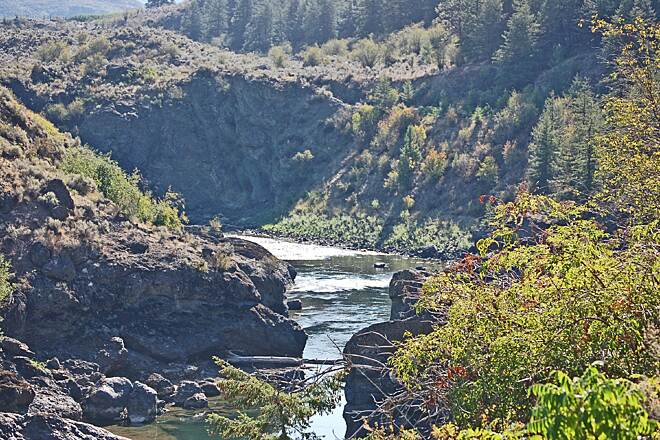 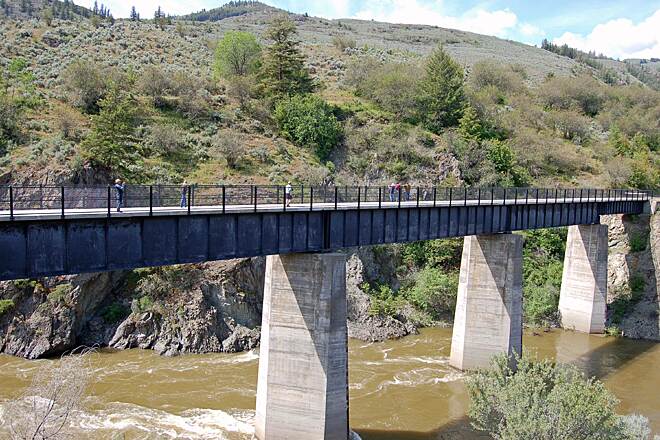 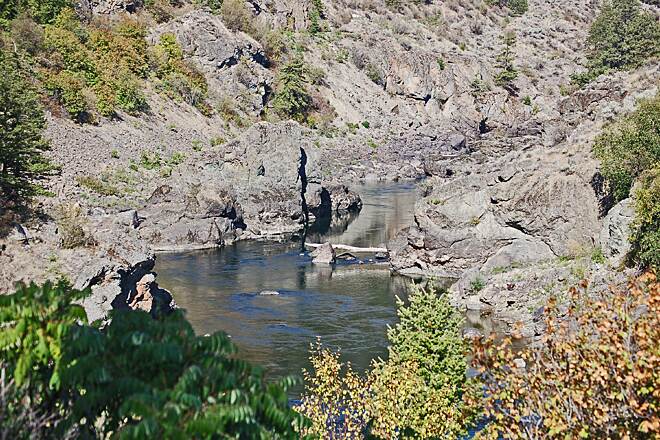 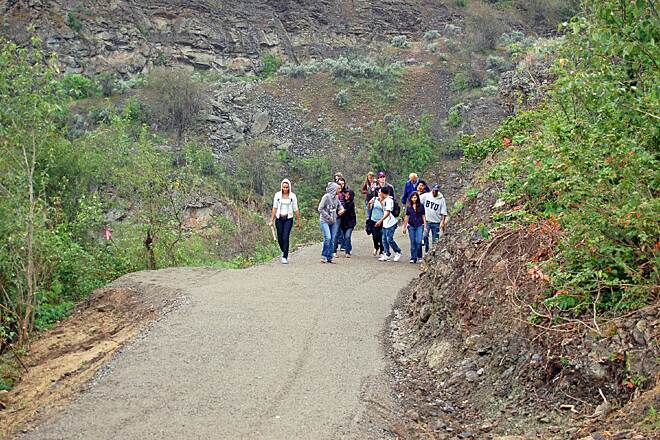 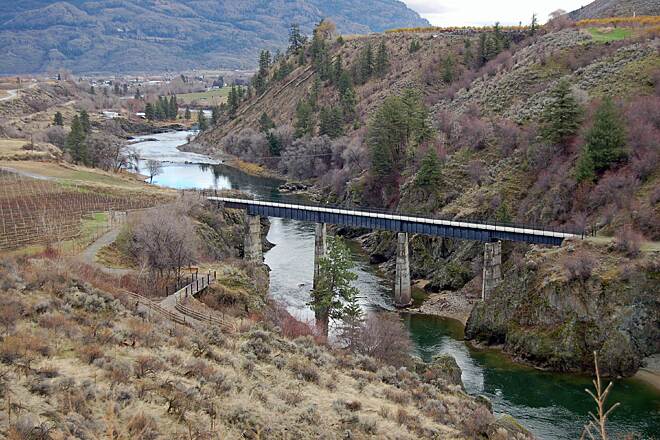 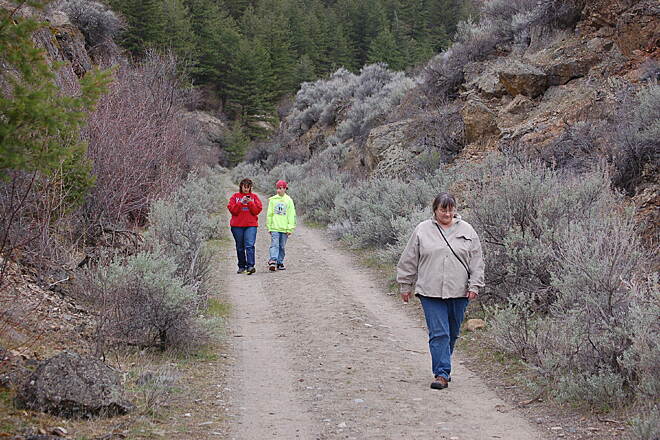 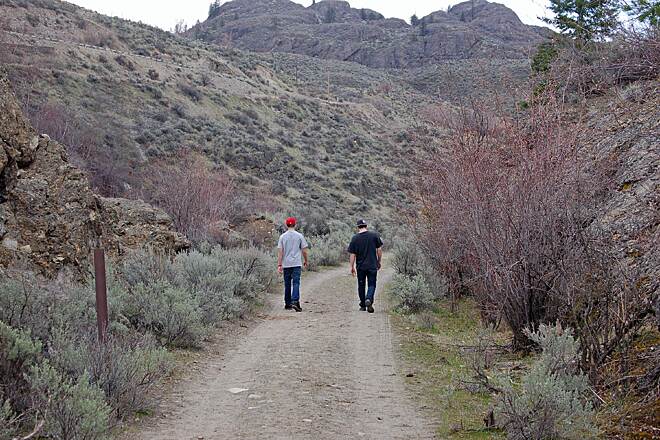 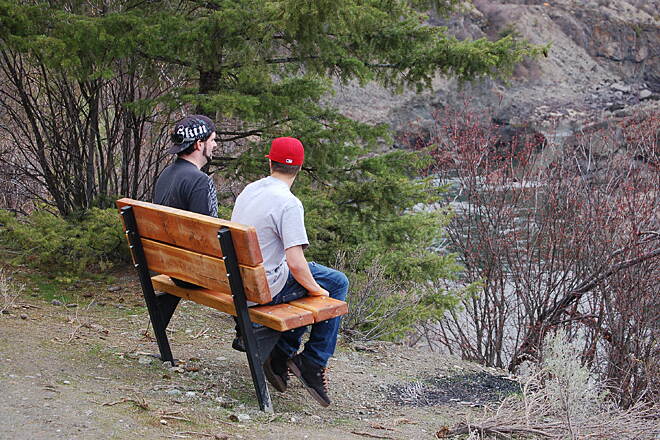 The Similkameen Trail follows a river by the same name that drains the high country across the border in British Columbia. The dirt and gravel rail-trail crosses a scenic high bridge to enter a dramatic river gorge that leads to a waterfall. But at 4.9 miles, the trail ends short of the Canadian border.

Built in 1907 by the Washington & Great Northern Railroad (which would merge with other rail lines to become the Burlington Northern Railroad in 1970), the original tracks fell into disuse in 1972 when a record flood caused bridge damage on the line. As one of the most biologically diverse watersheds in western North America, the cross-border valley is home to grizzly bears, wolves, lynx, fishers, wolverines, elk, snowshoe hares, mule deer, owls, woodpeckers, and a great diversity of birds, including eagles and falcons.

Beginning on the west side of Oroville, the path has an easy grade, despite the nearby Okanogan Highlands and Cascade Range. High temperatures here can soar to 100ºF in the summer or drop to 30ºF in the winter. Snow cover is possible between November and March.

In a setting of shrub steppe and occasional evergreens, the trail passes Taber's trailhead about 1.5 miles from the Oroville trailhead and crosses the Similkameen River gorge on a 400-foot-long girder bridge. In season, salmon and steelhead runs can be seen 90 feet below in the river.

Passing benches, interpretive displays, and views of the river, the route formerly ended at a gate with a vista of the nearly 100-year-old Enloe Dam and the waterfalls variously known as Coyote, Similkameen, or Enloe Falls. The trail now extends 1.5 miles further, to the east end of a 1,761 foot timber-lined tunnel. Okanogan County plans to push through the tunnel and extend the trail along the former rail corridor, to the mining ghost town of Nighthawk.The expansion will bring the trail closer to the Canadian border and the popular Kettle Valley Rail Trail network there.

The Old Oroville Depot Museum and Visitor Center, near the Oroville trailhead at 1210 Ironwood Street, has permanent and temporary displays of history and culture.

To reach the Oroville trailhead from the intersection of State Route 20 and US 97 in Okanogan, follow US 97 N for approximately 45 miles to Oroville. Turn left onto 12th Avenue, and then go one block to the Old Oroville Depot Museum at the corner of 12th Avenue and Ironwood Street. The trailhead is just up the street from the museum; follow signs.