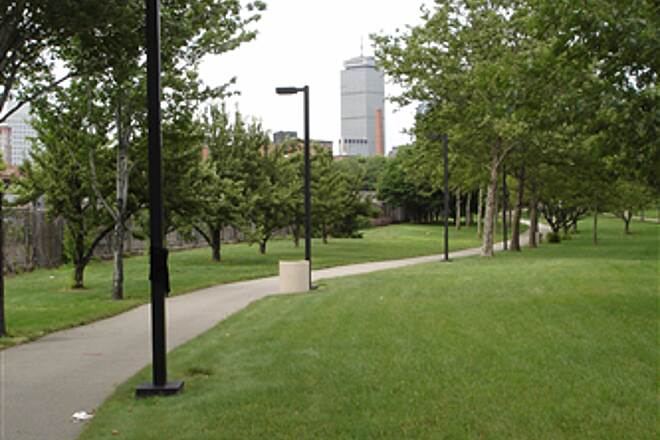 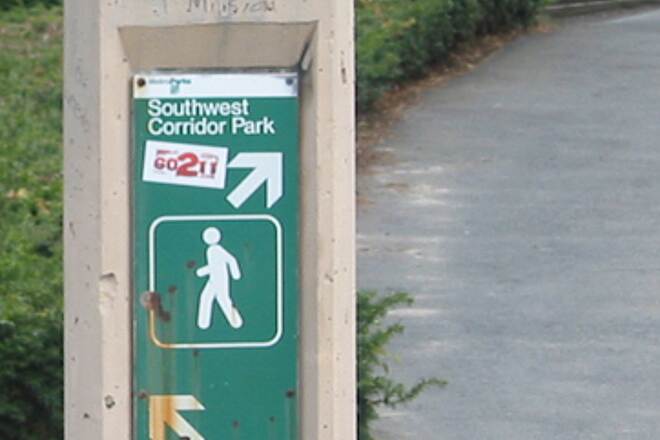 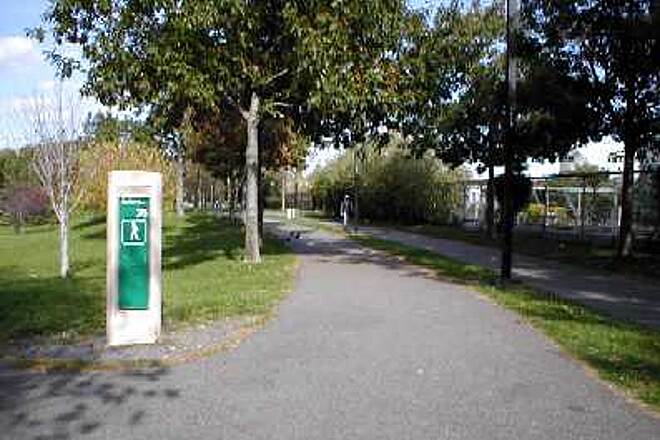 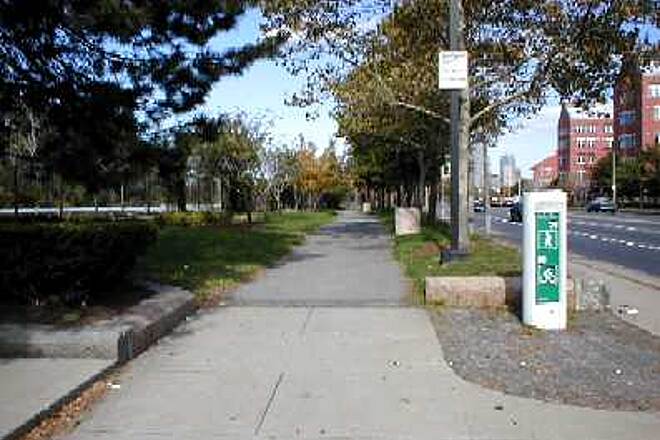 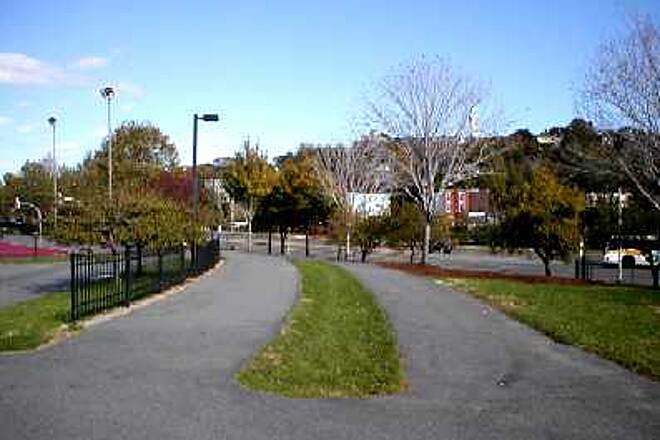 The Southwest Corridor Park (Pierre Lallement Bike Path) knits together neighborhoods in southern Boston from the Back Bay to Jamaica Plain. Popular as a route for commuters as well as casual walkers, runners, and cyclists, the 52-acre linear park passes skyscrapers, established residential areas, and community gardens.

The green space through the dense urban environment is a testament to residents who vociferously protested the bulldozing of their neighborhoods in the 1960s to make way for a 12-lane expressway. In the end, Governor Francis Sargent in 1969 discarded the highway plans for the razed corridor in favor of a 4.1-mile-long park featuring mass transit, open space, and recreation facilities.

Today, the Southwest Corridor Park parallels the Massachusetts Bay Transportation Authority’s Orange Line, roughly following the old route of the Boston Elevated Railway built to Forest Hills in 1908. The Orange Line opened in 1987, and the city dedicated the park in 1990.

Along its length, the Southwest Corridor Park contains community gar-dens (maintained by Southwest Corridor Park Conservancy), playgrounds, basketball and tennis courts, spray pools, and trails, including a 4.1-mile bike path named for Pierre Lallement, credited as the inventor of the pedal bicycle in the 1860s. In some places, adjacent paths separate bicyclists and pedestrians.

The northern trailhead begins across from the south entrance of the Back Bay T station on Dartmouth Street, only blocks from Copley Square, the Bos-ton Public Library, and commercial Newbury Street. The trail winds its way between small residential South End side streets lined with historical brown-stones. This skillfully designed section includes dog parks, playgrounds, neighborhood vegetable gardens, and basketball and tennis courts.

As the trail crosses West Newton Street, you can see the Prudential Center and John Hancock buildings, landmarks on the Boston skyline. Symphony Hall, home to the Boston Symphony Orchestra, is a couple blocks north of the Massachusetts Avenue crossing as you enter Northeastern University’s urban campus. Approaching the college’s tennis courts, turn left and then right to remain on the path as it parallels Columbus Avenue for a short stretch to Ruggles Station, where you’ll cross the 2-mile South Bay Harbor Trail. Scattered along the corridor are more tennis courts, basketball courts, spray pools, street hockey rinks, and amphitheaters.

The path continues along Columbus Avenue, then cuts behind Jackson Square Station, where murals line the corridor to Centre Street. You’re never far from groceries and sandwich shops if you’re hungry.

The trail ends just across Washington Street from Forest Hills Station, though you can extend your walk or ride into Arnold Arboretum, across South Street to the north of the station. The arboretum is part of landscape architect Frederick Law Olmsted’s Emerald Necklace, a 1,100-acre chain of parks conceived in the 1870s for Boston and Brookline. It offers an alternate walking or bike route back downtown.

The southern trailhead is at Forest Hills T station, also on the Orange Line. To reach the southern trailhead in Jamaica Plain from I-93, take Exit 2B toward MA 138/Milton. Go 1.1 miles north and veer right onto Canton Ave. Go 2.2 miles and turn left onto Blue Hills Pkwy. Go 2.7 miles and turn left onto MA 203/Morton St./Arborway. Go 1.8 miles and look for the trail on your right immediately after Washington St. Turn left onto Washington St. to find the Forest Hills T station parking.

This is an amazing option for commuters in Boston and bikers trying to get from point A to point B in the city. The bumpy and cracked pavement made it difficult to enjoy as a leisurely ride.

Ride through a green urban corridor

The word "trail" calls up visions of the woods, but this is a purely urban ride through a narrow green corridor extending southwest alongside the Orange Line subway and commuter rail tracks. In some places the green strip of parkland is 100 yards wide and in others it's only 10 feet wide. It's well used by bicycle commuters, and you're never out of sight of people and buildings. It's a wonderful way to see city neighborhoods, but it still feels like a park. The trail starts in Back Bay and extends through Roxbury to the edge of Jamaica Plain and ends at the Forest Hills Orange Line stop. All along the trail, there are handsome new buildings and vest pocket parks, especially in Roxbury in back of Northeastern University and Wentworth College. (It's worth a detour off the trail to ride around Northeastern's newly extended campus.) Except in Rush hour, you can take your bike on the Orange Line subway, so you can get access to the trail from any of the stops between Bay Back and Forest Hills.

If you need to get from Back Bay to Roxbury this is the trail for you. A winding paved path that passes townhouses, dog parks, community gardens and playgrounds and by-passes all the traffic in Boston! Sure you have to cross some side streets but it is worth it for a stress free ride. For you commuters this trail goes along the Orange Line from Forest Hills to Back Bay station.

Very happy to have found this trail. Some signage is needed in certain places, but most of all at Columbus and Camden, where one would continue down Columbus (going toward downtown) unless one knew that a left on Camden was necessary.

My wife and I found the SW Corridor this spring after a ride through the nearby Arnold Arboretum which we'd been intending to visit for a long time. The Arboretum was beautiful, but not extensive enough to make a ride worth driving up from RI for. Friends from the surrounding community of Jamaica Plain had told us there was some sort of path along the MBTA rapid transit line, so we explored the area around the large MBTA station down the hill from the Arboretum.

Despite a lack of clear signage, the path was easily found across the street from the station, running along a greenway that follows the track northwards toward downtown Boston. There are lots of street crossings and changes of surface, jogs left and right, places stretches of regular sidewak and places where you might think the ride is over until you explore a bit.

Eventually, the greenway ends, but despite appearances, the path does not, continuing down the alley that divides the backs of apartment buildings. From this point, you are pedaling through urban backyards and may take in a half-court basketball game, some great gardens and say hi to someone enjoying coffee. This is not the usual bike path - you need to focus on what's coming up and make a lot of decisions and adjustments to terrain, pedestrians and autos. I think of some paths as similar to video games and this is one. We probably would have lost the track if we hadn't been following two other cyclists who knew the route. We wound up coming out at Back Bay Station, Boston's second largest commuter train terminal, an intensely urban environment. At this point, we gave up the chase, but our "rabbits" continued on.

The Arboretum, by the way, is a classic Victorian park, with several miles of hilly auto-free roads (and throngs of strolling families - take it easy down hills). There are two climbs of a few hundred feet to overlooks of Boston and fabulous trees, gardens, greenhouses and bonsai. However, as a bike ride, it is rather short. We were done in an hour or so. Taken together with the Corridor, this makes an interesting half day of exploring by bike.

"This paved trail, located in the heart of Boston’s south end, parallels a rapid transit line and a relatively busy four-lane road. The trail offers pedestrians and bicyclists residing near its many access points a means of connecting to adjacent bus and train stations without having to bike/walk on busy city streets. Some hearty commuters/students may choose to bike/walk all or portions of the path’s length and head straight into downtown Boston (near Northeastern University).

The trail is nicely paved and in some spots it is double-tracked; that is, one side is marked for bikers and in-line skaters while the other side is reserved for pedestrians.

Most of the trail route is nicely lined with trees and shrubs. Regardless of the planted foliage though, you won’t forget that you’re in the middle of a major city; the motor vehicle traffic noise is endless. As you might expect, there are a number of busy street crossings along the trail’s route.

If you live and go to school/work near any access points to the Southwest Corridor Park Trail, you might want to try using it someday as a method of getting to your bus or train stop. Or, perhaps you should try biking, skating, or walking to your final destination. However, I don’t recommend traveling a distance to visit this trail strictly for recreational purposes. The nearby Minuteman Bikeway is much better suited for that purpose."