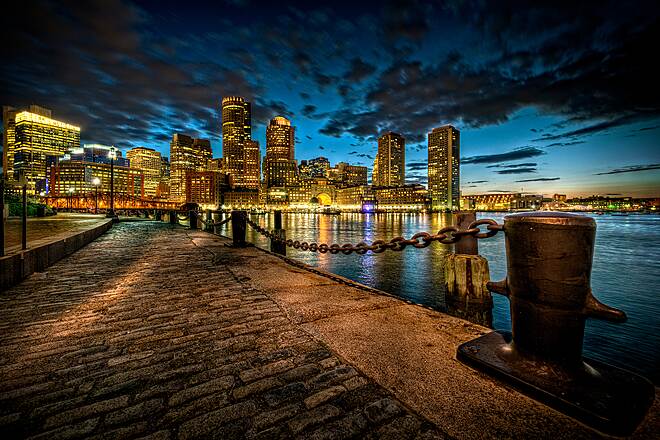 Just outside Ruggles Station, at Columbus Avenue, you can connect to the Pierre Lallement Bike Path, which runs through Southwest Corridor Park. If you stay on the South Bay Harbor Trail, you'll parallel tree-lined Melnea Cass Boulevard through a commercial area.

Midway, you'll head northeast along I-93 for a short distance, then cross under the highway and across Bass River. Next, you'll pass MBTA's Broadway Station and then the east end of the trail will become much more pleasant. You'll traverse Children's Wharf Park, adjacent to the Boston Children's Museum, and cross Fan Pier Park with lovely views of the water. The trail ends next to the Institute of Contemporary Art.

Access is available via Boston's Massachusetts Bay Transportation Authority (MBTA) subway system. Bikes are allowed on the MBTA subway system, just not during rush hours (7-10 a.m. and 4-7 p.m. weekdays) due to crowding. The west end of the trail begins at Ruggles Station (at the intersection of Ruggles Street and Tremont Street) on the Orange Line. Mid-trail, the route passes the Broadway Station (at the intersection of Dorchester Avenue and Broadway), which is on the Red Line. Near the east end of the trail, South Station is located across the Summer Street bridge; it's also on the Red Line.

Boston's Rose Kennedy Greenway may not be very long, but it's jam-packed with attractions. Along the paved pathway, you can access five parks, be...

The Massachusetts Central Railroad was destroyed by a hurricane in 1938, but the 104-mile corridor is being reborn as a cross-state rail-trail....

The North Bank Bridge, which opened in 2012, provides a safe and convenient pedestrian and bicycle connection between Cambridge's North Point Park and...

The Southwest Corridor Park (Pierre Lallement Bike Path) knits together neighborhoods in southern Boston from the Back Bay to Jamaica Plain. Popular...

The Northern Strand Community Trail is part of the visionary and almost-complete Bike to the Sea plan to link Boston and the Mystic River to the...

The Fresh Pond Bikeway runs through Fresh Pond Reservation, a park in Cambridge, Massachusetts. The bikeway winds around the east edge of the Fresh...