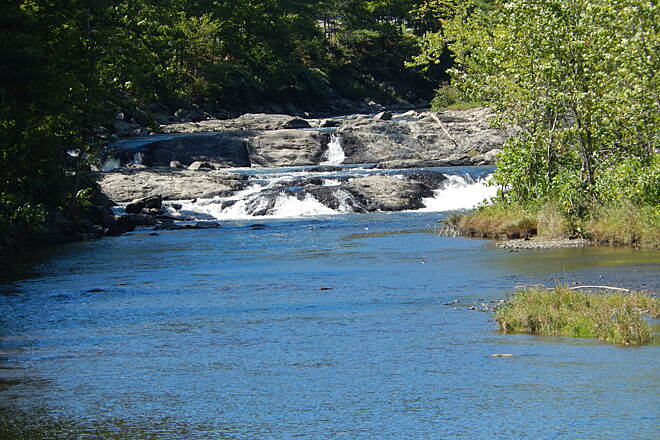 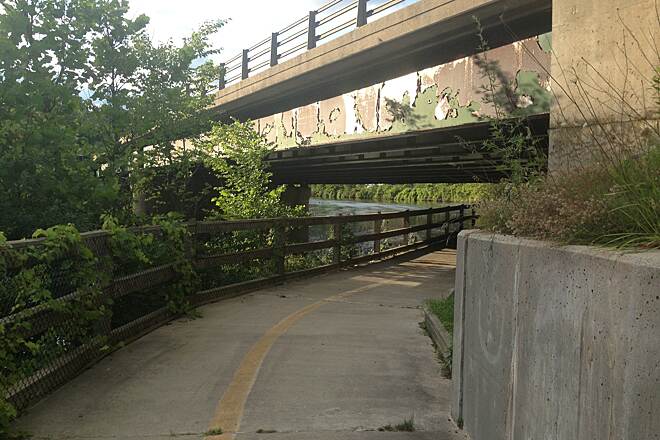 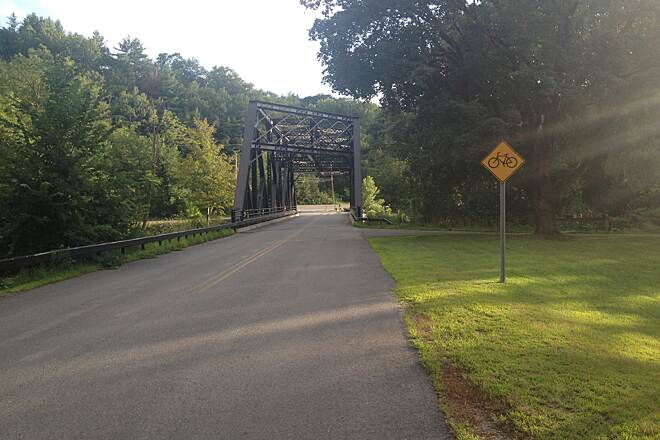 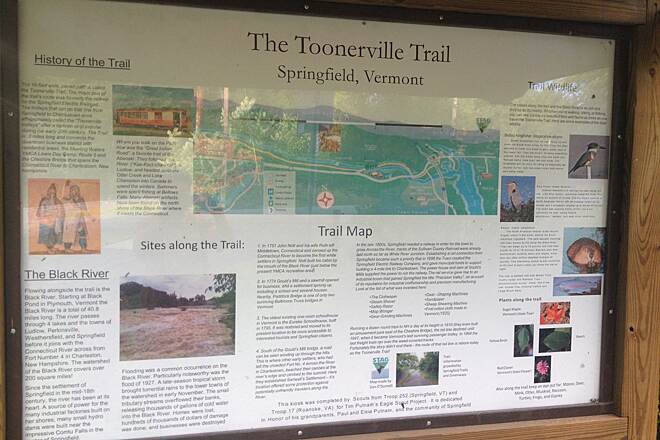 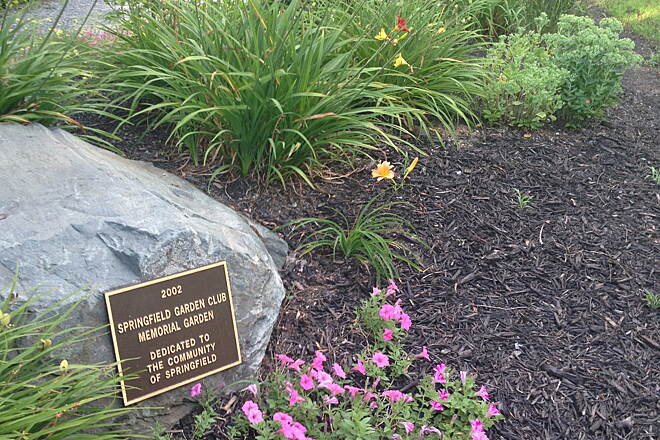 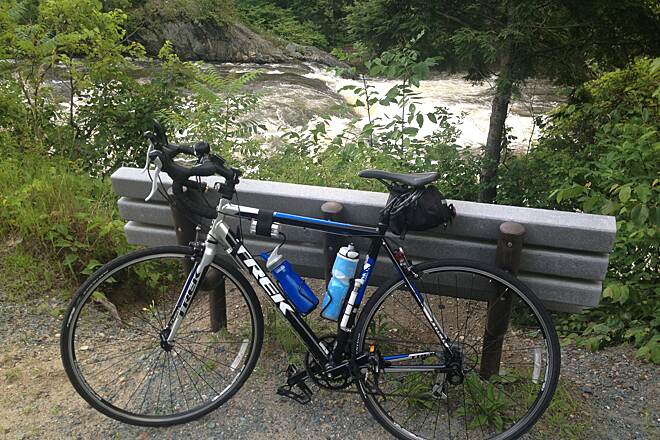 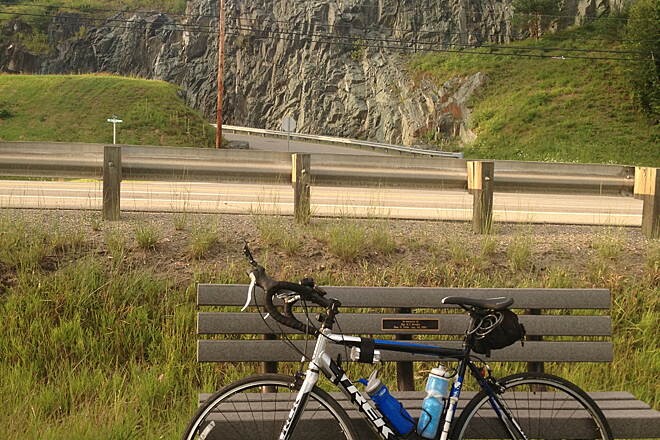 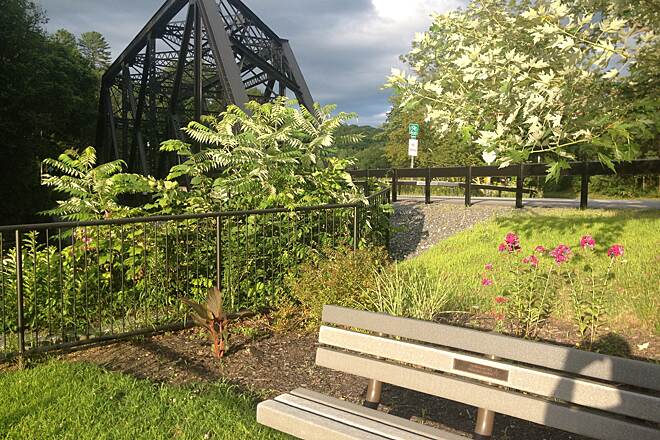 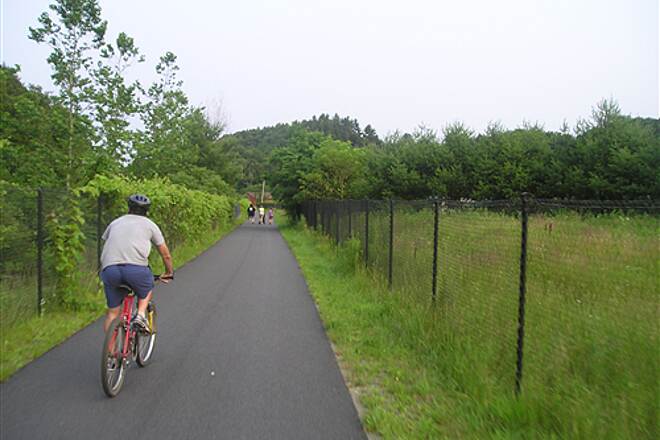 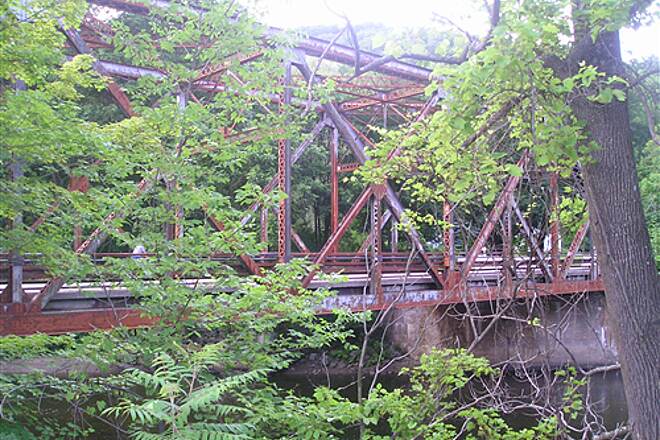 The Toonerville Rail-Trail shadows the Black River for most of its 3.2-mile length in eastern Springfield to the border with New Hampshire across the Connecticut River. The route originally carried an electric trolley that locals nicknamed the Toonerville Trolley, referencing a nationally syndicated newspaper comic that ran 1908–1955 and was adapted to early comedy film shorts. That name has survived on this paved trail long after most have forgotten the comic strip or the trolley.

The trolley’s actual name was the Springfield Electric Railway, which later became the Springfield Terminal Railway. The city of Springfield funded the 4-mile interurban railway in 1896 to make connections to the railroads that passed through Charlestown, New Hampshire, across the Connecticut River. It later fell under control of the Boston and Maine Railroad. Although the trolley stopped running in 1947 (it was the state’s longest running at the time) and freight stopped using the tracks in 1984, the Springfield Terminal name still survives as a subsidiary of Pan Am Railways.

The paved multipurpose trail (also known as the Springfield Greenway) opened in 1999. It begins about a mile east of downtown on SR 11/Clinton Street in a field shared by the Springfield Farmers Market on Saturdays, June–early October. There’s plenty of parking here.

The trail heads away from the highway briefly into the woods and along the banks of the Black River—a gradual downhill experience. There are plenty of opportunities to stop and gaze at the river and watch for waterfowl, including kingfishers, blue herons, and copious duck species, fishing for their food. The river’s falls in downtown Springfield fed the mill boom in the 1800s and enticed companies to relocate here. One of those, Jones & Lamson Machine Co., became a world-renowned toolmaker. Its inventions were spun off into new companies, and the area became an early-20th-century tech boom center known as Precision Valley.

A cascading waterfall is visible about 1.2 miles after the trailhead, where a small tributary joins the main channel; at certain times, the falls project rainbows of light, providing copious photo opportunities. About 0.2 mile later, the trail crosses the river on Gould’s Mill Bridge. A 0.4-mile side trip down Perley Gordon Road right before the bridge visits the Eureka Schoolhouse; completed in 1790, it’s the state’s oldest surviving one-room schoolhouse. Crews moved it here in 1968 from its original location.

Crossing the bridge, the trail route detours onto lightly trafficked Paddock Road for 0.7 mile. The path returns on the right side of the road and then goes beneath SR 11. In the final mile, the trail runs alongside SR 11, crosses US 5, passes a truck stop, goes beneath I-91, and then stops at a Vermont Fish and Wildlife Management Area on the shores of the Connecticut River.

While the original trolley provided a connection to downtown Springfield, the city has plans to extend the trail about 0.7 mile northward to Bridge Street, allowing easier access to downtown.

To reach the Hoyts Landing trailhead from I-91, take Exit 7 onto US 5 toward Charlestown. Go about 0.3 mile on US 5 N/SR 11 E, and turn right onto Youngs Road; immediately look for parking on the right.

My wife and 2 kids (7 and 10) and I were here on a Sunday afternoon. We started at the end of the trail near Rt 91. We were the only ones there. We parked in the trail parking lot and headed toward Springfield. The trail starts as a dead end street, at the end of the street it turns to a paved bike path. The start of the path is very nice, after passing by a gas station and a busy road crossing and parking lot, it parallels a river for about 1/4 mile. The trail ends and the route follows a quiet country road for another 1/2 mile before coming to an old iron road bridge that crosses the river. There's a small park just over the bridge that we stopped at for a break. After that, the "bike trail" just parallels route 11 until the outskirts of Springfield. It looks just like a pavement sidewalk next to a busy road, for the next 2 plus miles until it ends in a run down part of the edge of town. Overall not much scenery after mile one, and not much fun.

ok but not great

Directions to the Hoyt's Landing traihead are poor. Should say, "small sign on the Vermont side, just before you cross the Connecticut River into New Hampshire."
This trail is nicely paved, but too industrial and too many cars for our taste. Vermont is late to the casual biking game and doesn't seem to place much if any emphasis on it. Happily, New Hampshire is just the opposite (figuratively and literally.) Many fine trails in New Hampshire. Vermont: Get with It.

Walking for health and wild flowers

This is a very nice walk for getting back in shape. I walked the full length and enjoyed seeing one small garter snake, a bluejay, hawk, crows and many smaller birds. There were so very many species of wild flowers on the trail today. Even wild grapes. Numerous types of trees too.
People use this for biking, walking, pushing baby strollers, walking dogs, skating. No 4 wheelers allowed. Slight incline to go under bridge. There are about 4 resting benches. Common to see older couples out using this trail too. The trail is on pavement. The trail is 3 miles end to end. ~~Mary

Pleasant ride. Not too difficult, some of the inclines were a little tough for those of us that are out of shape or have joint issues! Rode from Hoyt's Landing to Springfield then on into downtown Springfield. As a previous reviewer noted, the ride into downtown is on the road. The bike lane is very narrow and mined with storm drains every 50'. The brush along the path needs trimmed in a couple of areas, making a bit of a slalom course. Several benches along the path overlooking the river. Overall a nice short path.

At a little over three miles, the Toonerville Trail is not the longest rail trail I've pedaled, but it's pretty. I was on a mountain-biking two day trip, Fort Hill Branch Trail the first day and Sugar River Trail the second day, and I took the Toonerville Trail as a little road-biking change-of-pace in between. I joined the trail at the parking area on Rte 11/5 at Young's Road, not far from the Connecticut River. I rode down to the end of the trail, which is apparently near downtown Springfield, though I did not explore past the end of the trail, opting to ride straight back. It was a lovely ride. The trail does run alongside Rte 11 for much of its length, but I was only briefly bothered by traffic noise, despite riding around 6 pm on a weeknight. There is a beautiful flower garden near the trestle, now for cars, on Paddock Road. In mid-July, the garden was in bloom and looking radiant. Kudos to the Springfield Garden Club. On my way back, I road beyond my parking area and down to the very end of the trail at the Connecticut River and then over to Hoyt's Landing for some beautiful views of the confluence of the Black and Connecticut Rivers and the bridge that crosses over into New Hampshire. Next time, I will park and start my ride there at Hoyt's Landing. I ended up staying the night at the Holiday Inn Express just off the trail, a very pleasant hotel.

Though this trail runs along the Black River, for most of the ride the other side of the trail is bordered by a busy, 4-lane highway. When you get to the western end (about 3 miles from the eastern start), you are faced with either heading back, or riding uphill on the same busy road or on narrow, bumpy sidewalks to the tired center of Springfield, VT.

Consider riding the trail if you're in the neighborhood, but don't make the mistake of going out of your way to ride it, as my wife and i did.

I would like too see the sides mowed, because of ticks and etc.