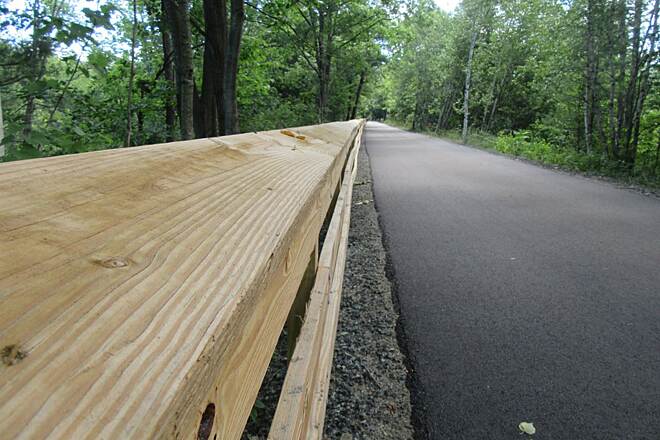 The Mascoma River Greenway is a planned 4-mile non-motorized pathway through the heart of Lebanon. The trail is envisioned to link West Lebanon to the Northern Rail Trail, which spans more than 50 miles.

In 2013, the first mile was completed stretching west from the intersection of High, Mascoma and Mechanic streets. Another phase, starting in 2017, saw the paving begin for a 2.1-mile segment that will cover this first mile, up to the intersection of Mechanic Street and Glen Road. The trail traces the route of the former Boston & Maine Railroad through the town, bringing residents closer to the river and to the flora and fauna that surround it. The trail is also a connector to various destinations ranging from schools and shopping to parks.

Four bridges along the route will be repaired as part of this trail project. You can follow the construction progress on the Mascoma River Greenway website.

Mascoma River Greenway can be accessed at various points along its length, but its eastern starting point is at the junction of High, Mascoma and Mechanic Streets in downtown Lebanon. Just east of this endpoint, parking is available along Colburn Park (51 N. Park St., Lebanon).

On the other end of the trail, parking is available in Riverside Park (103 Glen Road, West Lebanon), located 0.4 miles west of the western endpoint of the trail; note that this requires on-road riding along Glen Road to go from the park to the trail.

The Bobby Woodman Rail Trail, a hard-packed dirt and gravel pathway, begins off a quiet street at the southern end of Claremont and quickly dives...

Many rail-trails start at a vintage depot, an old caboose, or a rusty locomotive acquired by the local historical society. The Warren to East...

The Toonerville Rail-Trail shadows the Black River for most of its 3.2-mile length in eastern Springfield to the border with New Hampshire across the...

The Winnipesaukee River Trail runs along a rail line that previously connected the paper industry between Franklin and Tilton. Nicknamed the Paper...

Locals lovingly describe the Cross Vermont Trail as a patchwork quilt that will ultimately form a 90-mile trail from Lake Champlain in the west to the...

The Ammonoosuc Rail Trail carries its users for 19.2 miles along the scenic river that shares its name and is itself a destination for fishing,...

The Millstone Hill West Bike Path connects the charming communities of Graniteville and Websterville in central Vermont. The trail is part of the...

About a dozen miles west of Concord, the Stevens Rail Trail offers a quiet, wooded route along the former Concord-Claremont rail line in Contoocook...

Lake Winnisquam is New Hampshire’s fourth largest lake, and taking the Lake Winnisquam Scenic Trail is one of the best ways to experience it. Meaning...