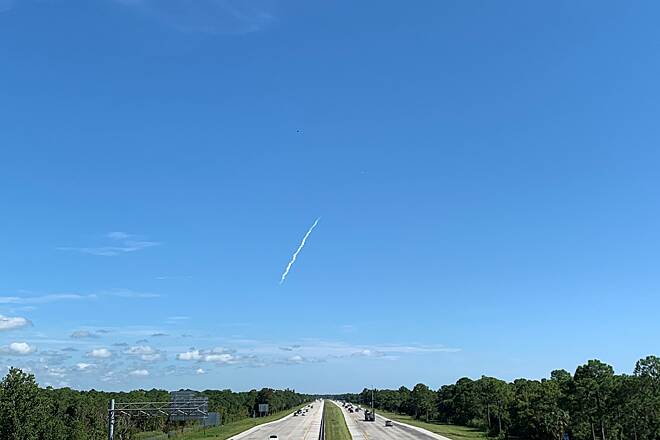 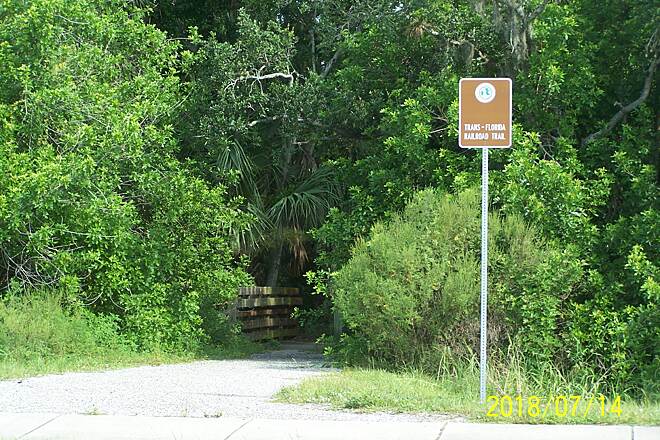 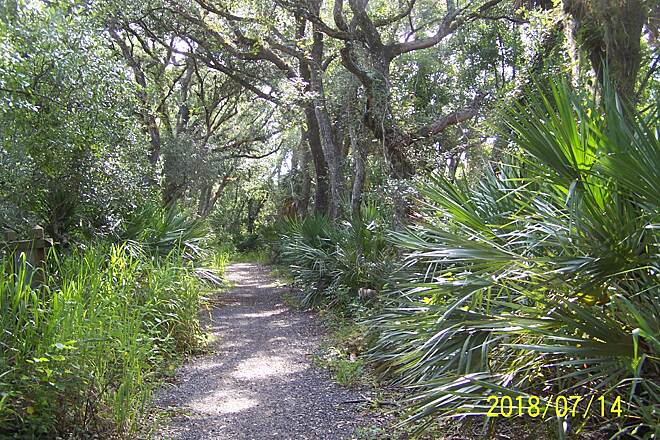 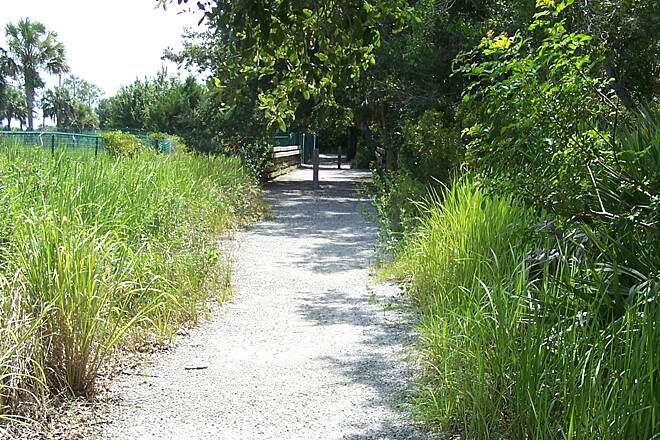 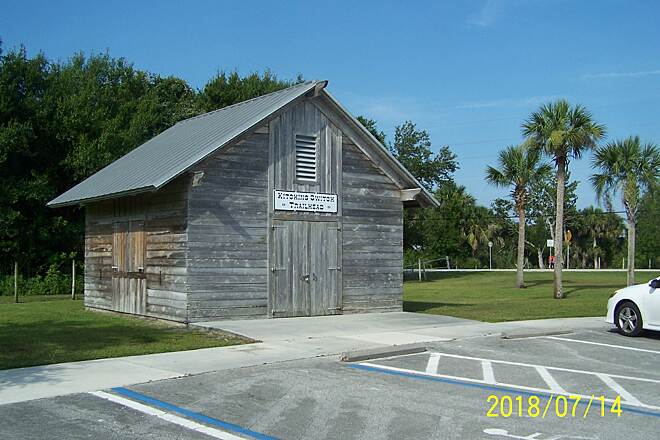 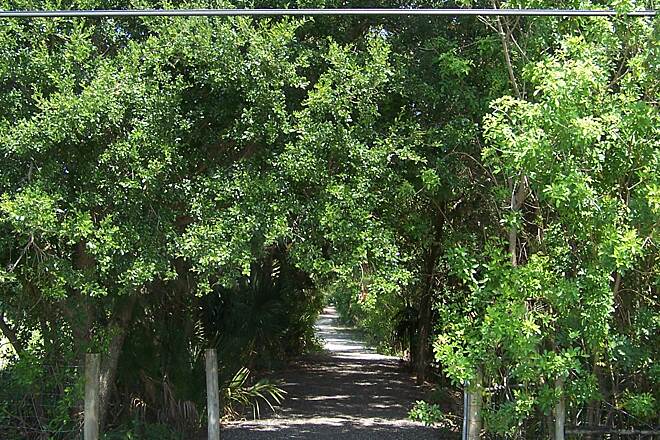 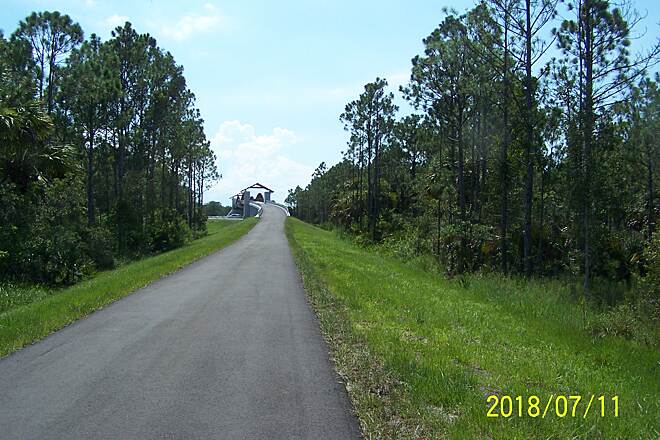 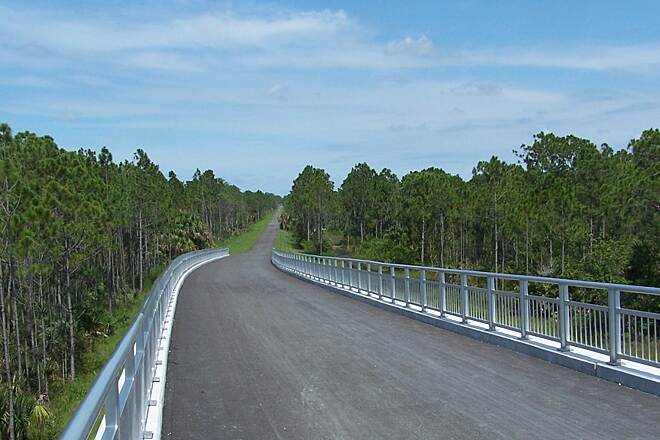 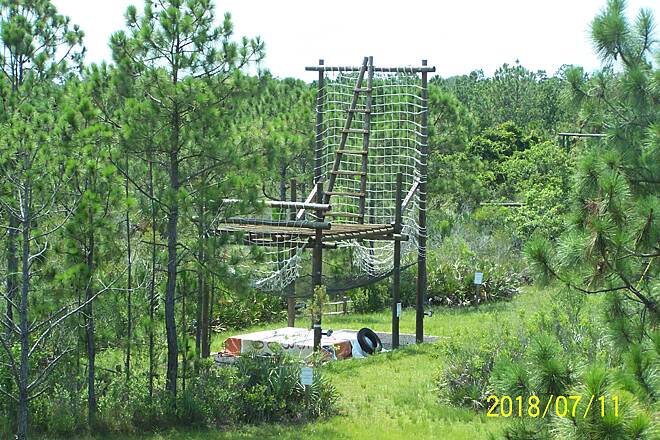 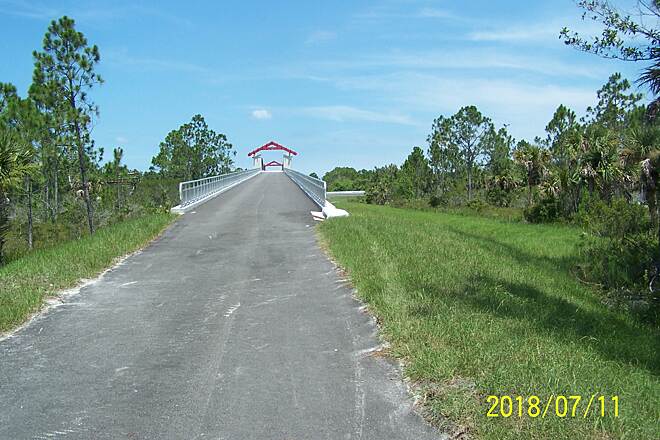 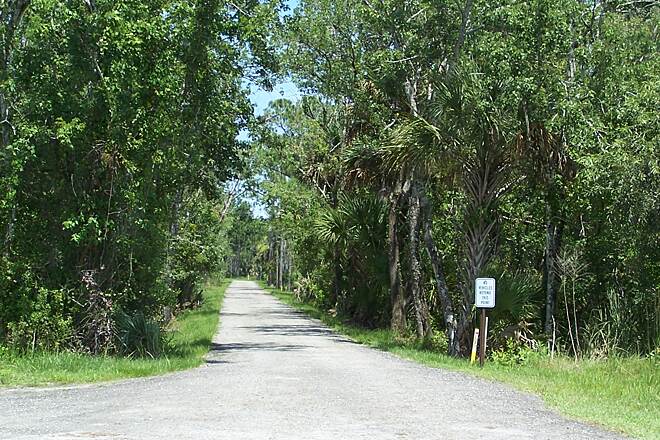 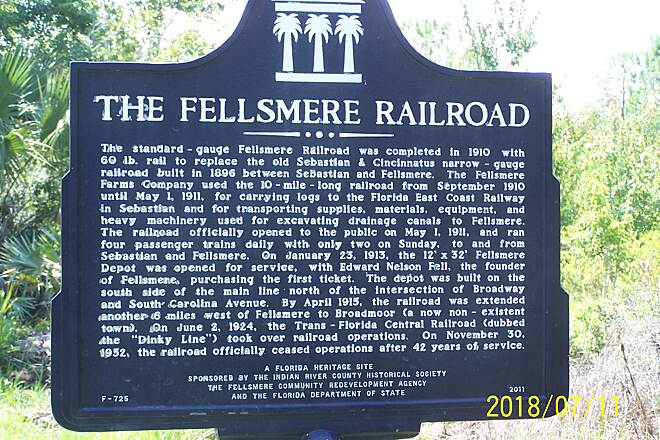 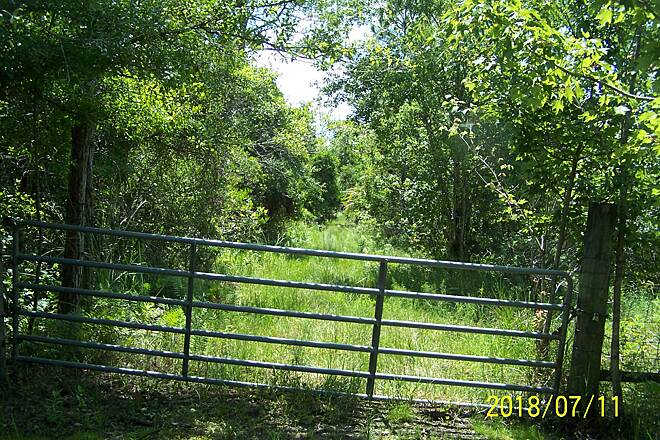 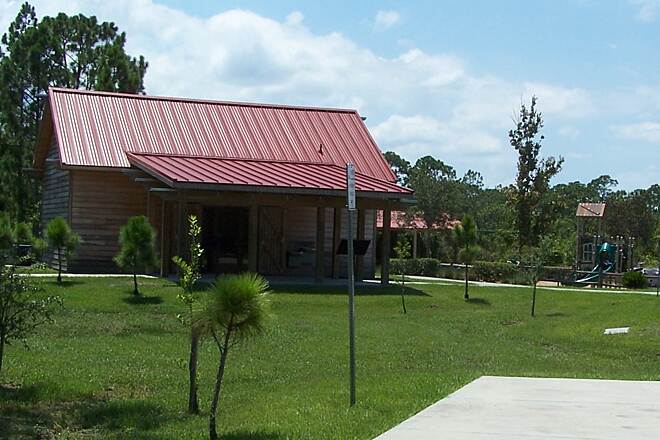 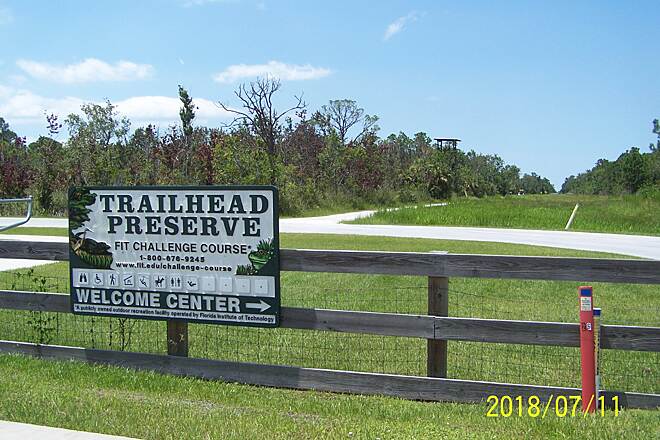 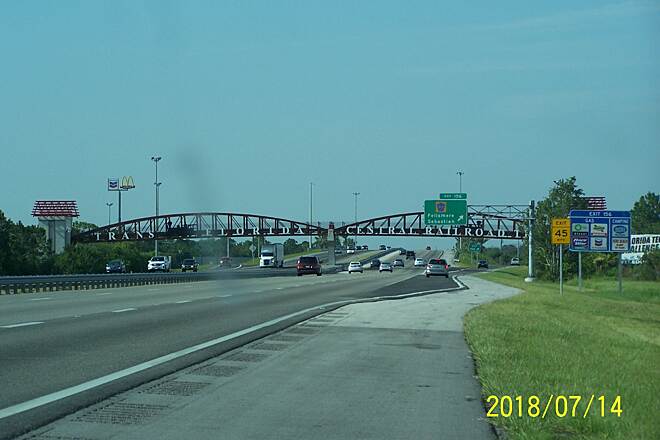 The Trans-Florida Central Railroad Trail is a 2-mile hiking and biking pathway sitting in a former railroad corridor that once connected Sebastian and Fellsmere. The centerpiece of the trail is the iconic bridge over Interstate-95: a broad walkway with two arches, meant to invoke images of the railroad bridges of a bygone era. The name of the trail is displayed prominently in huge letters across the span of the bridge.

Though the railroad right-of-way it occupies is about 15 miles long, in total, only 2 miles of trail have been completed. Riders and hikers can now travel on the paved off-road trail from the Fellsmere Preserve Trailhead east across I-95 to to the North Indian River County Regional Park in Sebastian. It is hoped the pathway will be extended both east and west in the future but for now, you can continue your journey east and north via the sidepath along County Road 512.

This was an incredible ride! From the Bridge all the way to US1. This is a pavement and Gravel trail. I did 15 miles round trip to US1 and back over the bridge. I thought I was going to die going up the bridge on the way back. This is my longest ride to date. Been riding for 3 weeks now. Really enjoyed this ride today.

This trail is well maintained and is perfect for riders of all levels. There is also ample parking and a welcome center. I saw a family of deer and a large amount of flora.

A perfect ride for a nice morning bike!

My daughter and I rode this scenic trail in North Indian river county. There is ample parking at a county park and getting on the trail could not be any easier! Lots of people using this lovely trail that had an easy grade overpass overlooking busy I-95. This trail is perfect for anyone looking for a quick stretch of the legs and a breath of fresh air!

I heard from a friend that the trail was now open all the way to Fellsmere, so went to check it out. The gate into the St. Sebastian River Preserve had been modified to leave an opening for pedestrians and bicycles. West of the gate, the trail was a bumpy dirt track, mostly hard packed and grassy. As I approached a wider cross track marked Red Trail, it had long patches of soft white sand. From the crossing, I could see long patches of white all the way to the vanishing point, so I turned back- too soft for my hybrid bike. It might be OK for a mountain bike or beach cruiser.

Going back east, I followed the trail to its junction with the Sebastian Greenway at the county highway 512 and continued into Sebastian, a stretch I had not ridden before. The Greenway was just wide sidewalk for a mile or so, then was set back from the highway behind a belt of tall cedars, set close like a hedge; it continued like this all the way to the FEC tracks beside US 1. Apparently the cedars were planted on the original railroad grade, up to two feet above the level of the trail. They screen the trail from traffic noise and provide a lot of shade early in the day. There are several street crossings, but the busier ones have traffic signals and walk lights.

Trans-Florida Central Railroad Trail: So read the lettering on a new pedestrian overpass spanning I-95. I'd never heard of it, and couldn't find it on the internet, so I decided to drive down and check it out.

I started at the Fellsmere Trailhead Preserve, just west of I-95 on highway 512. A young mother was watching her child on the playground as I unloaded my folding bike. Inside the shelter I found restrooms and a wall map of the Regional Greenway, which includes the rail trail (see pictures).

Pedaling around the trailhead, I saw no way to the trail until I came to a hard packed sand roadway leading north from the entry road. A road grader operator confirmed that this was the way to the overpass.

At the trail, packed sand gave way to a hard gravel surface with pinewoods on either side. I turned left, to find the end of the trail at a locked gate. Here the old railbed led straight west, through the woods of the St. Sebastian River Preserve State Park towards Fellsmere.

Turning around, I pedaled a half mile eastward to the paved section, twelve feet wide, beginning at the approach to the overpass. Out to the left were several structures of the FIT Challenge Course: horizontal rope nets, wooden walls to scale- challenges I might have tried half a century ago.

Descending the overpass, the trail turned a few degrees south of east and ran board-straight between stands of tall pine to the vanishing point. Not much shade; a summer afternoon sun would shine straight down the trail, and this morning there were only a few patches of broken shade.

It was busy on this Saturday morning- two couples walking abreast, pushing a tandem stroller; two young girls walking a huge, furry poodle-ish dog; other couples and individuals pedaling or strolling. The mile and a half of pavement led to North County Regional Park and its large, well attended swimming pool. I could hear shouts and splashes as I passed. A trailhead shelter here was closed.

From the pavement's end, a nicely wooded mile of gravel trail meandered through thick woods, over several boardwalks across the wetter places and through an oak hammock with some magnificent trees. I passed a young lady jogger, then a fast moving male cyclist, who confirmed that the trail ran on into Sebastian.

It popped out of the woods at a bridge over an arm of the St. Sebastian River, where it joined a wide sidewalk on highway 512, continuing the Regional Greenway northeast into town. I didn't have time to ride it, but looked it over by car- a true greenway. More than half its length was set back from the roadway and screened by tall, thick rows of cedar. Some of these sections adjoined neighborhood streets. A number of walkers and cyclists were using it.

Four miles of greenway led from the end of the rail trail to the downtown Sebastian waterfront, at US 1, which boasted a mile of wide bike lanes. A block east, Indian River Drive followed the shore of the Indian River Lagoon, with a half dozen seafood restaurants overlooking the water.

Starting at US 1, a rider could go about six and a half miles to the east end of the existing rail trail. Plans call for the rail trail to extend about three miles further west, into downtown Fellsmere.

Fellsmere has two very authentic Mexican restaurants, one including a bakery, plus a local pizza parlor. Southern comfort food is on offer at the century-old Fellsmere Estates Building, in a small historic district along Broadway St. The town has the oldest operating library in the county, and was the first town in the south where a woman voted in a municipal election.

Despite its imposing name, the Trans-Florida Central Railroad was never more than a feeder for the main rail line along the east coast. It reached about fifteen miles inland, to the St. Johns marshes and the former town of Broadmoor, planned for development but abandoned after a hurricane flooded the area in 1916.

The rails brought lumber and building materials inland to Fellsmere, carrying out whatever products were harvested from the marshy land over the decades- sugar, citrus, potatoes, muck for fertilizer, pulpwood. Early in the last century, passenger service ran four times a day between Fellsmere and Sebastian.

This short rail line buoyed the region's economy for half a century. Its legacy is a pleasant greenway, well used by locals and worth a visit for anyone seeking a leisurely ride.